Appalachian Trail 2016: Getting to the Trail

After several long days of travel, I have finally made it to the Hiker Hostel in Georgia (one of the best hostels I've stayed at).  Tomorrow I get shuttled to Amicalola Falls State Park where I will begin my journey.

My bus ride to Georgia began with a 32 hour bus ride from Hope, BC (my dad, being a particularly awesome guy, drove me to Hope to save me a day on the bus) to San Francisco, California.  This leg of the trip took me through Washington and Oregon, taking me to cities such as Seattle, Olympia, Portland, Salem, Sacramento, and Oakland.  I spent a weekend with family in the Bay Area before getting on another bus, this time for 62 hours, traveling to Gainesville, Georgia.  That part of the bus trip took me through Arizona, New Mexico, Texas, Louisiana, Mississippi, and Alabama.  I got to pass through Los Angeles, Phoenix, Lordsberg, El Paso, Dallas, Shreveport, Monroe, Jackson, Birmingham, and Atlanta (just to name a few cities ).  It was a very exhausting trip, but I am still looking forward to beginning my hike tomorrow.

The bus trip was long, but it was far from uneventful.  From LA to Phoenix I sat next to a lady who spent most of the time arguing with her boyfriend on her cellphone.  At El Paso a passenger fainted in the bus station, resulting in 911 being called.  She was traveling with her dog and the paramedics told her the dog couldn't go in the ambulance.  Another passenger, who was going to the same destination, offered to take the dog to the lady's daughter.  The lady became hysterical, convinced that the passenger was going to keep her dog.  It was heartbreaking to watch her beg and plead for the dog to stay with her.

Probably the funniest thing I saw was a man on the bus trying to sell his shoes.  I'm pretty sure he was doing this so he could get McDonalds, and even then I think all he cared about was getting the Monopoly pieces.

At the hostel I filled my fuel bottle with denatured alcohol, officially giving me everything I need for my trek.  I also raided the hiker boxes (a hiker box is a box where hikers can give up items they no longer want; it's along the lines of a take a penny leave a penny jar), finding a package of Ramen.  This made me happy as it means I can have one hot lunch before my next stop.  I also found some instant rice which I will use to top up my dinner tonight.

I'm going to make supper, maybe take one more shower, and then go to bed early.  I want to have lots of energy for tomorrow, when I will climb Springer Mountain, the southern terminus of the Appalachian Trail.
Posted by Clueless Hiker at 13:07 No comments:

It is a long standing tradition for people attempting to thru-hike the Appalachian Trail to adopt a "trail name".  Some people allow others to choose a name for them, while some prefer to pick their name themselves (to avoid having a handle like Stumbles or Snot Nose for 5 months).  On my previous thru-hike attempt, I was in the latter category, and I was given the trail name "Noel" based on my mother's maiden name.  I was happy with that name as it gave me a chance to pay tribute to my mother, and I was proud to be Noel for my brief time on the trail.

I have decided for my upcoming hike to pick my name, as another way of changing my hike from the last attempt.  After much deliberation, which included the creation of flow charts, spreadsheets, and an entire Microsoft Access database, I have settled on the name "Tortoise".

There are a few reasons that I have chosen this name.  One of the smaller reasons is that tortoises are the single best animal on the planet.  This is not my opinion.  It is a fact.  It has been scientifically proven.

Another smaller reason is that I feel like my hiking style has similarities to the walking style of the tortoise in The Tortoise and the Hare.  I'm not a very fast hiker, but I can hike fairly consistently.  By virtue of chugging along for hours on end, I can make some pretty good mileage.

However, the main reason I am adopting the name "Tortoise" is to honour my dad.  "Tortoise" is one of my dad's nicknames, so I thought I would pick it as a way of paying tribute to him.  My dad is the reason I am even attempting to hike the trail.  He introduced me to hiking and made it fun for me.  He has been my hiking partner for many years, and I couldn't possibly have a better partner.

My dad is one of my best friends, and he is also one of my biggest heroes.  My dad has always taught me, by example, how to be a good person.  To me, he exemplifies qualities such as honesty, kindness, open-mindedness, and integrity.  When I look at the ideal person to try to emulate, I always look at my dad.  I wish I could be the kind of person he is.

So in a few days I will begin hiking from Georgia as Tortoise.  While I hope I can succeed on the trail, my biggest hope is that I can spend my time on the trail in a way that makes me worthy of my dad's nickname.
Posted by Clueless Hiker at 19:23 1 comment:

I have just finished packing for the Appalachian Trail, and it was every bit as bad as I remember it being last time.  Cramming everything I will have with me for 5 months into a 50 liter backpack was an absolute nightmare.  I managed to get everything in eventually, but there is not a lot of extra room.  I'm not quite sure what I'll do when I have food.  I might just not eat on my hike, to save backpack space.  After much Tetris-ing, I ended up with a backpack with a 20.5 pound baseweight.  Certainly nothing to brag about, but on the other hand, it is much lighter than my last attempt of the AT.  I tried putting my backpack on and the weight didn't really bother me.  I know it'll get heavier once I've got food and water, but I still don't think the weight will really slow me down.  Then again, I've been proven to be very wrong in matters like this in the past. 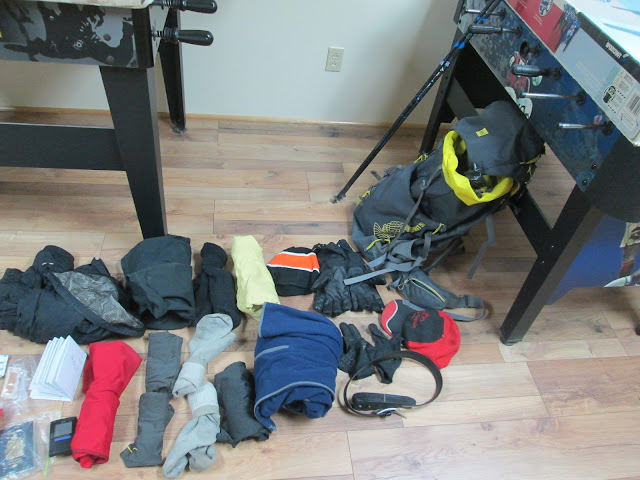 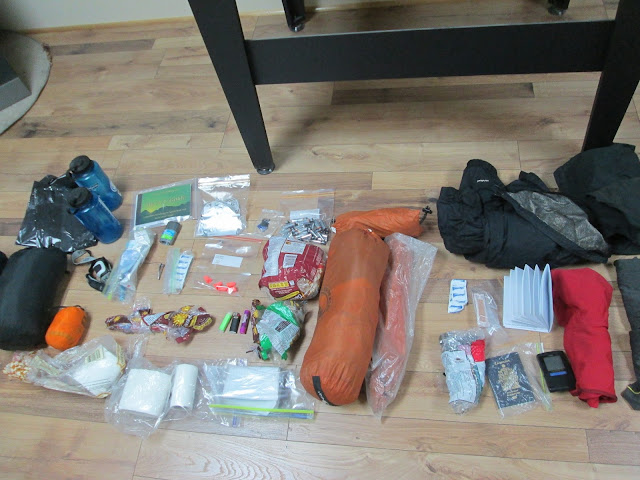 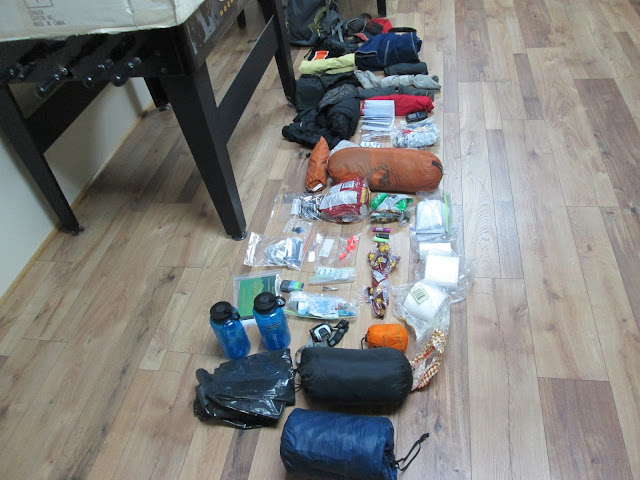 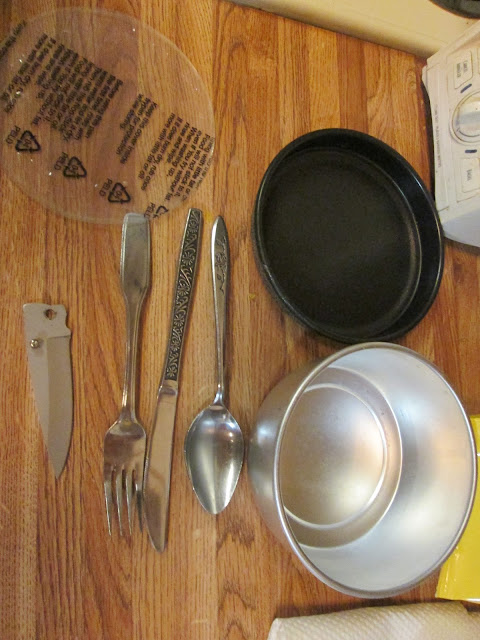 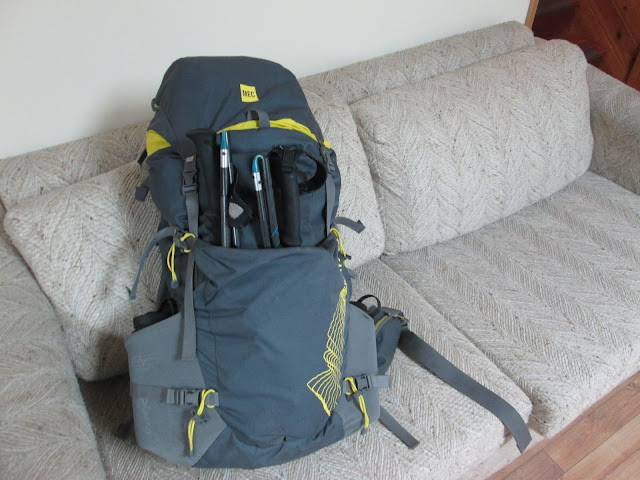 Posted by Clueless Hiker at 04:27 No comments:

Here is a list of everything I am bringing with me for my Appalachian Trail thru-hike:

The Appalachian Trail is a 2190 mile hiking trail that runs from Springer Mountain in Gerogia to Mount Katahdin in Maine.  The trail goes through 2 national parks (Great Smokey Mountains and Shenandoah) and 14 states (Georgia, North Carolina, Tennessee, Virginia, West Virginia, Maryland, Pennsylvania, New Jersey, New York, Connecticut, Massachusetts, Vermont, New Hampshire, and Maine).  It is one of the most popular hiking trails in the world (both for day hikes and backpacking trips) and draws in visitors from all over the world.

In winter 2013, I attempted to hike the Appalachian Trail.  My journey ended prematurely after I injured my knee and I was left feeling very disappointed and empty.  Deep down I knew that it wouldn't be my only chance to hike the trail, and in 2015 things started to fall into place for me to take a significant amount of time off work.  I ended up being granted a 1 year leave of absence to travel, and I knew I would have another shot at my dream.

For my second attempt of the trail, I've decided to do a lot of things differently.  The biggest change I've made is my start date.  In 2013 I started in the winter, doing an early thru-hike.  That meant dealing with the cold, having things freeze, trudging through snow, and having to carry a lot of extra gear.  This time I am leaving at the end of April, doing a late thru-hike.  My goal is to avoid the cold and make the most of the warm months.  I'll have to hike at a faster pace, but I won't be carrying as much, so it should be manageable.  I've also changed a lot of my gear.  Instead of taking my 80 liter backpack, I will be taking a 50 liter one.  Right away that forces me to take only the bare essentials, dramatically lightening my load.  I'm going to be taking the Big Agnes tent I bought in Neels Gap, a much smaller and more compact tent than the MEC one I started with last time.  As I am not hiking in the winter, I can take my 0 degree summer bag, rather than my bulky -12 degree winter bag.  I'm taking a lot less clothing too, and the clothing I'm taking is lighter overall.

I am optimistic about the hike that is ahead of me, and am looking forward to the experiences it will bring.  I obviously don't know exactly how my hike will go, but I believe I have increased my odds of success.

I will update this blog as often as I can.  Unlike last time, I should have photos in my updates.
Posted by Clueless Hiker at 03:57 No comments: