After returning to Quadra Island, we headed to the trail to Surge Narrows on the eastern side of the island.  The drive to the trailhead was quite interesting; the road devolved into a very rugged one with lots of steep ups and downs.

We got to the parking lot and started down the trail.  The trail was short and pleasant, and before we knew it, we were at the Surge Narrows lookout.


Surge Narrows is located just off Hoskyn Channel.  They are tidal currents, and from what Dave told us, they are quite spectacular when the tide is coming in.  Unfortunately, there wasn’t a strong “spring tide” that day, meaning the difference between low and high tides that day was moderate, so the tidal currents were likewise moderate.  Spring tides produce more impressive currents at this location.  It was still a very nice spot, and we spent several hours relaxing on the rocky lookout, enjoying the scenery.

Almost immediately after the peak of the tidal flood, the current reversed as the tide began to ebb again, and we headed back up the trail to the parking lot.  On our way back to the We Wai Kai Campground, we stopped at Village Bay Lake and did the short trail there.  We spent a bit more time there than the length of the trail required, as we were ambushed by some very aggressive huckleberries.

The next day, we got up early, ready for what was going to be our toughest hike of the trip.  We would be climbing Mount Seymour, the highest mountain on Quadra Island.  The trail gained over 600 metres in elevation, so we knew it would not be easy to make it to the top.

The first bit of trail ascended fairly steeply on an old logging road.  I found myself huffing and puffing more than on the other days of the trip.  After hiking for awhile, we got to the junction where the final ascent to the summit began.  We were getting close to the summit, but it still felt so far away. 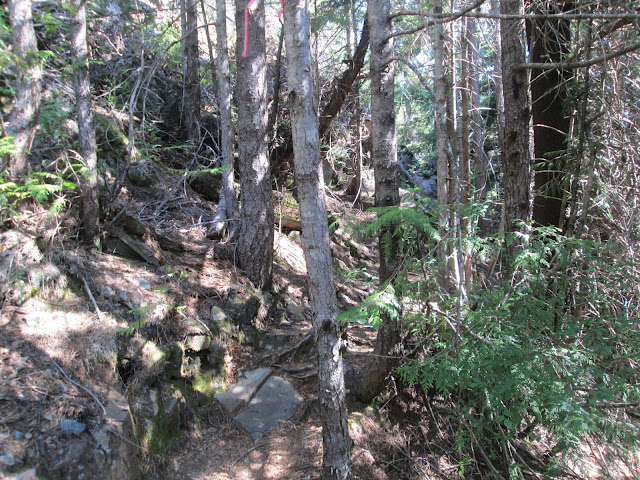 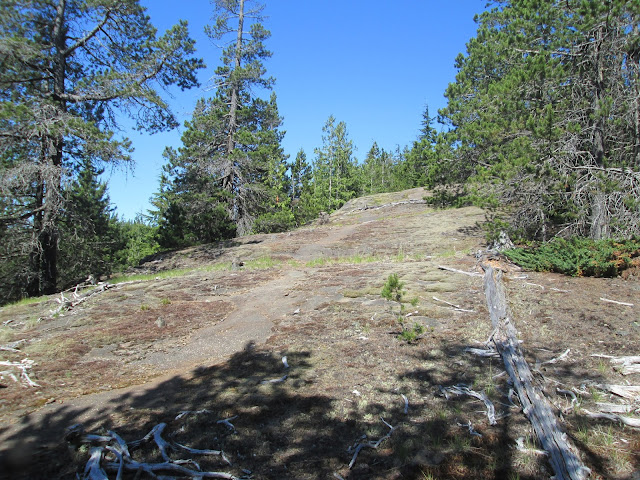 As we ascended more and more, we started to get some views, teasing us of what was to come at the summit.  We got a view of one of the Nugedzi Lakes, our destination after we summited the mountain.


As we continued hiking, I kept thinking that we were on the last push, only to see the trail stretch on further.  Every time I thought we were at the top, the trail moved downhill, losing elevation, only to climb up again.  It began to feel like we were on a roller coaster.


Eventually we made it to the top, where there were two viewpoints.  From one, we could see Vancouver Island; from the other, we got views of the Coast Mountains on the mainland.  The view was quite stunning, and I would say that climbing Mount Seymour was the highlight of Quadra Island for me. 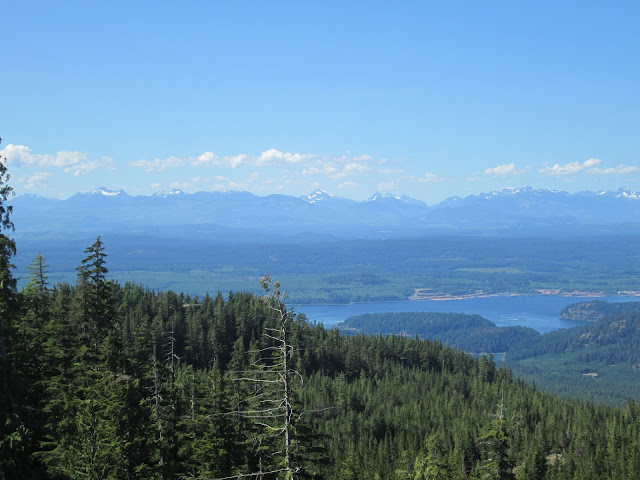 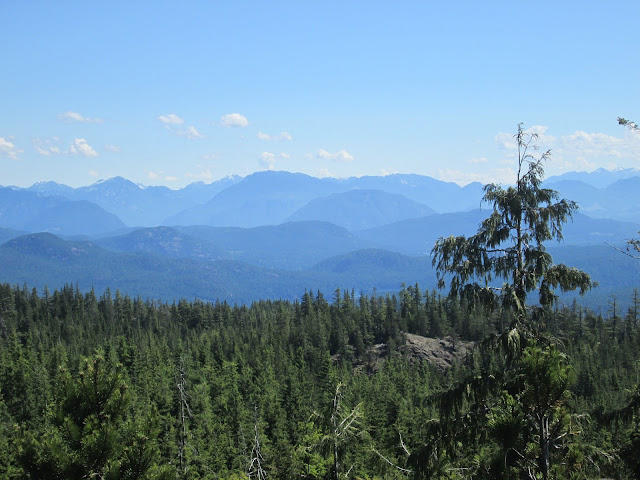 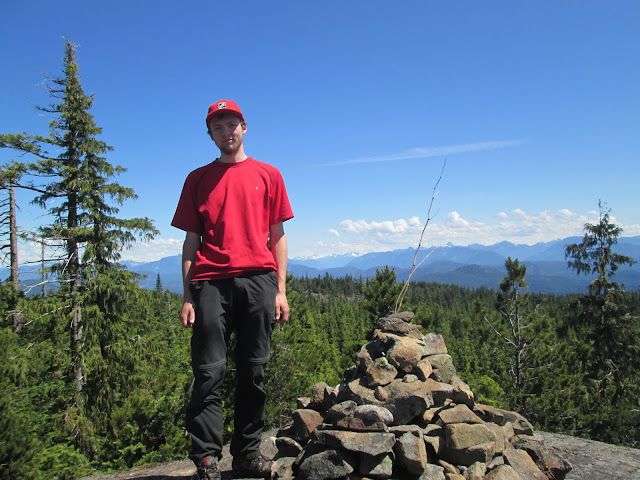 After a lengthy break, we headed back down the trail, and then we turned onto the trail to the Nugedzi Lakes.  We would be doing the hike as a loop rather than a linear trail, and I am very glad we did it that way.  The Nugedzi Lakes and the summit of Mount Seymour are both worth seeing, and I think it would be a shame to see one and miss out on the other.


The first lake we came to was Little Nugedzi Lake.  It was a nice lake and I enjoyed the hike along its edge very much.


After we got beyond the first lake, we took a side trail to a lookout of Seymour Narrows.  This short detour was well worth doing, as we ended up getting a very nice view.

Back on the main trail, we soon reached Nugedzi Lake.  I was tempted to go swimming, as it didn’t feel too cold, but I decided against it, as my hiking pants don’t feel nice when they are wet (and I had neglected to bring my swimming trunks).


Continuing on, we came to another side trail that went to the Lily Pond and a lookout of the Chinese Mountains.  Again, this was a side trip that was worth making, as both the pond and the lookout were very nice.  Dave pointed out an ancient beaver dam that was overgrown with vegetation.  He also pointed out some sundews, which are carnivorous plants.  Bending down to touch one, he pretended to become stuck.  As Dave is vegetarian, I noted the irony of a plant consuming a plant-eater. 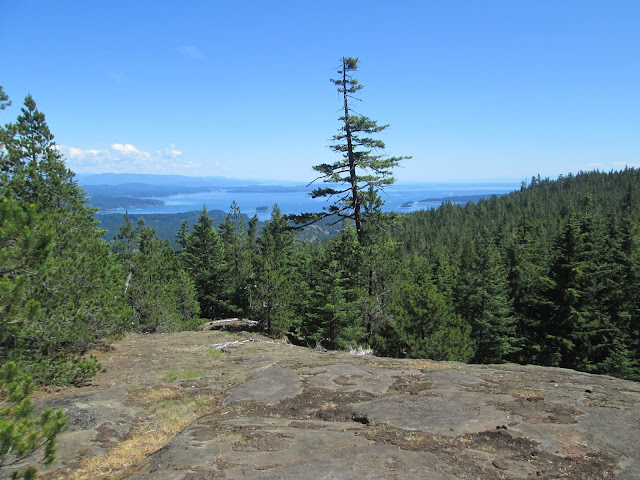 We were soon on the main trail again, and the descent that followed was very steep and rocky.  As I struggled down the trail, I couldn’t help but be glad we hiked the trail in the direction we did.  Going up this side would have been twice as exhausting.


We made it back to our vehicle and headed back to our campground.  I was quite happy that we had succeeded at completing the most difficult hike of our trip.  It had been a tiring day, but it was easily one of my favourite days of the trip.

The next day was the last of our trip.  We made our way to the village of Cape Mudge, where we would be doing our last hike on Quadra Island: the hike to the Cape Mudge Lighthouse.


We were delayed quite a bit as we hiked the trail, as there was an abundance of perfectly ripe salmonberries on both sides of the trail.  The salmonberries were one of the best parts of the trip for me, as we had access to them just about every.  We really went to town on them on this last trail, as we knew it would be awhile before we would have them again.

It wasn’t long before we had reached the lighthouse.  We stopped for awhile and enjoyed the views of Campbell River to the west.  Once we had gotten our fill, we turned around and headed back to the vehicle.


We had lunch and got on the ferry to Campbell River.  It was sad to be leaving Quadra Island, but I knew I would be back sometime.  Both islands that we visited were what I would consider to be paradises, and I know I will never tire of them.


On our way back to Victoria, we made one final stop at Miracle Beach Provincial Park.  It felt nice to have a stop to break up the drive, and I enjoyed seeing the beach at low tide.

We were soon in Victoria and saying goodbye to Dave.  After a visit with my sister and her family, we would be on the road heading back to Princeton the next day.  I couldn’t believe how fast the vacation had passed.

Quadra and Cortes Islands were never really on my radar of places to visit, but I am extremely glad that I went there.  The trip sparked an interest in the Gulf Islands for me, and before the trip was over, I was making plans for more trips to more islands.  I feel we got a great taste of what Quadra and Cortes Islands are like, but I know there is still so much to see on both islands.  I will always remember this trip, and will miss the islands very much until I have the chance to return.
Posted by Clueless Hiker at 17:33