One of my goals this winter has been to try to get into snowshoeing.  Save for a couple of short hour-long trips, I had no experience with snowshoeing prior to the trip I took on the Lightning Lakes chain.  I decided to be fairly unambitious with my first real snowshoeing venture, so I elected to go from the Lightning Lakes day use area in Manning Park to Strike Lake.  My plan was to camp at Strike Lake.  In summer, I can cover this distance in an hour and forty five minutes, so like I said, it wasn't an ambitious plan.  Still, I didn't know how long it would take me to do this distance with snow factored in.


I left the parking lot around 9 AM.  I had with me only the bare essentials: my tent, sleeping bag, sleeping pad, toilet paper, water, pizza (dinner of champions), and a Subway sandwich that I intended to eat for lunch.  The only other thing I had with me was some spare straps in case there were any issues with my snowshoes.

Speaking of my snowshoes, the ones I was equipped with were a yard-sale find, so they may not have been as well suited to my body build as what I would buy from an outdoor outfitter.  Regardless, they're a good pair of starter snowshoes.  On the two short trips I'd taken previously, they worked fine, except that the heel strap had a nasty tendency to come undone.  To rectify this, I had (with the assistance of my Dad) worked out a way of tying the strap so that theoretically, it could not come undone.  The only issue with this was that it meant that my boots would be stuck in the snowshoes for the duration of the trip, as it was too difficult to untie and retie the strap.  I hadn't tested this fix, but I assumed it was no longer possible that the straps could come undone.


It took less than ten minutes before the heel strap on my left snowshoe came undone.  This was quite disheartening, to say the least.  I seriously contemplated giving up at this point.  I didn't want to spend the day fighting with a flimsy rubber strap.  I eventually convinced myself to try to see if I could come up with anything with my backup strap.

I managed to MacGyver up a workable solution, though my boot wasn't strapped in as tightly as I would have liked.  I had no further issues with the snowshoes, though, and the strap on the right snowshoe never came undone. 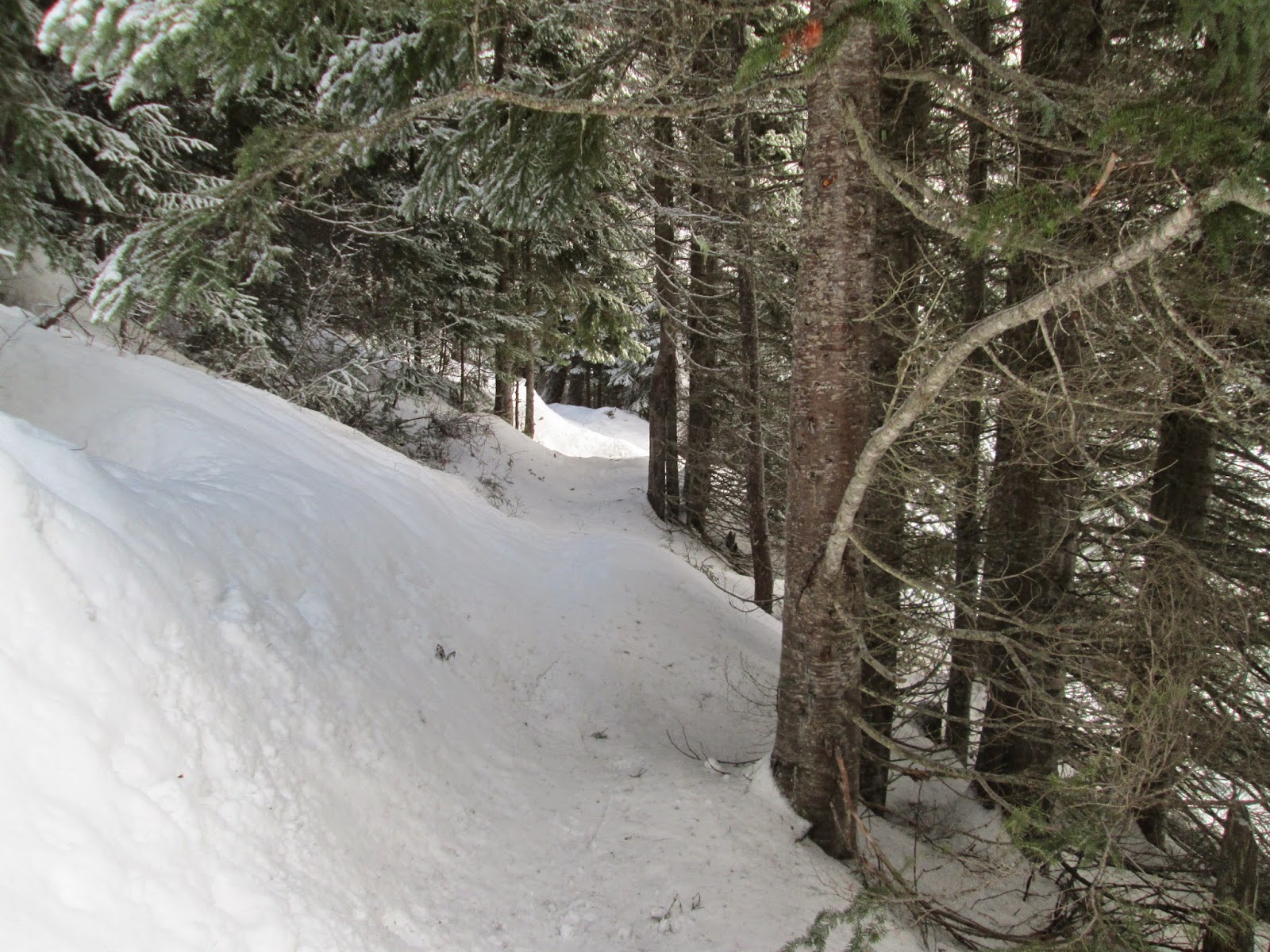 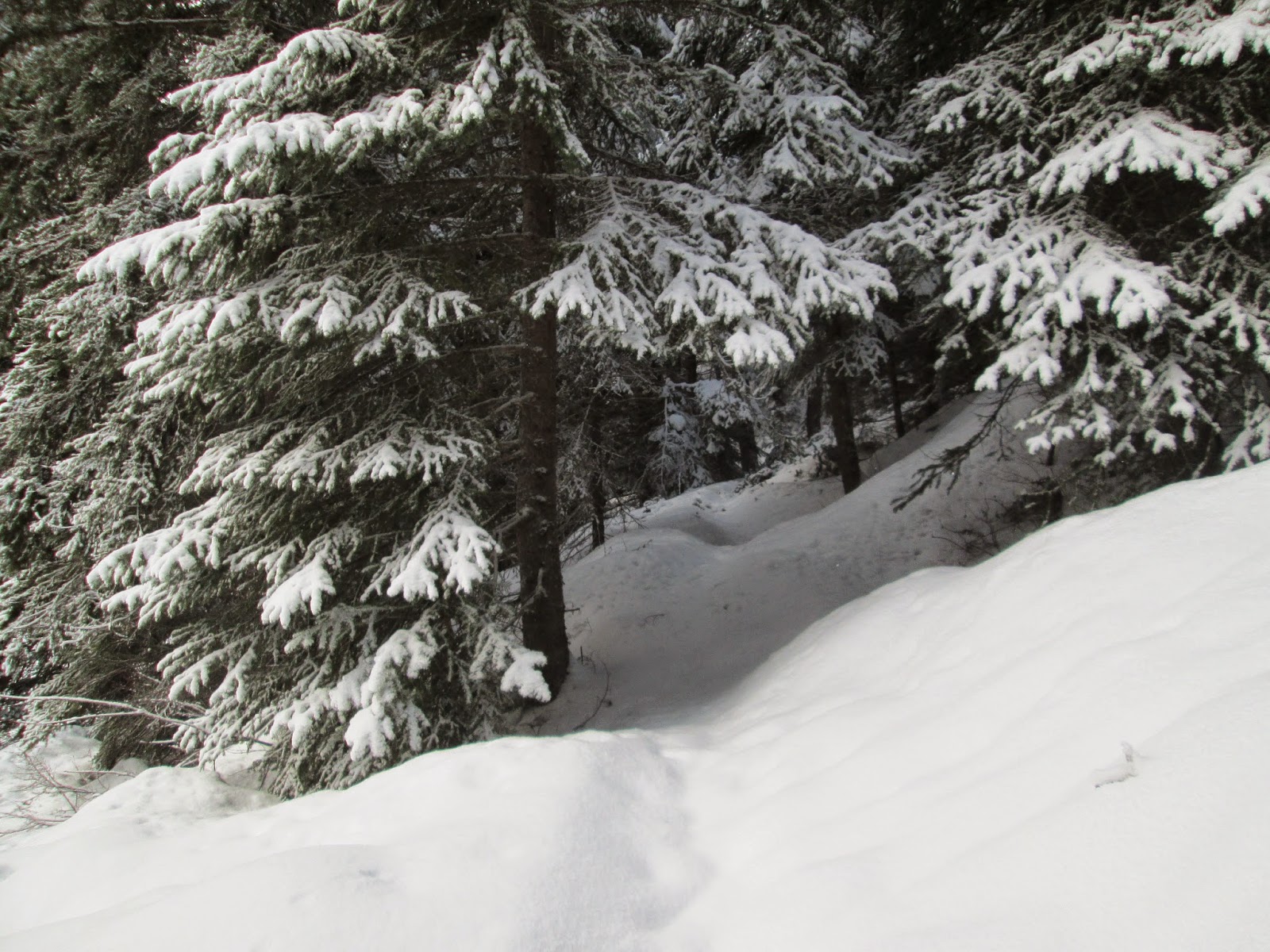 Soon I was approaching Flash Lake, about the halfway point of my trip.  At this point, there were no beaten tracks to follow, as I broke away from the trail around Lightning Lake.  I ended up slowing down a bit because of this, but it's not as if I was making good time anyway.  It had taken me twice as long to reach this point as it would have in the summer, and this was on a trip with almost no elevation change.  I couldn't imagine how slow a trek up Mount Frosty would be. 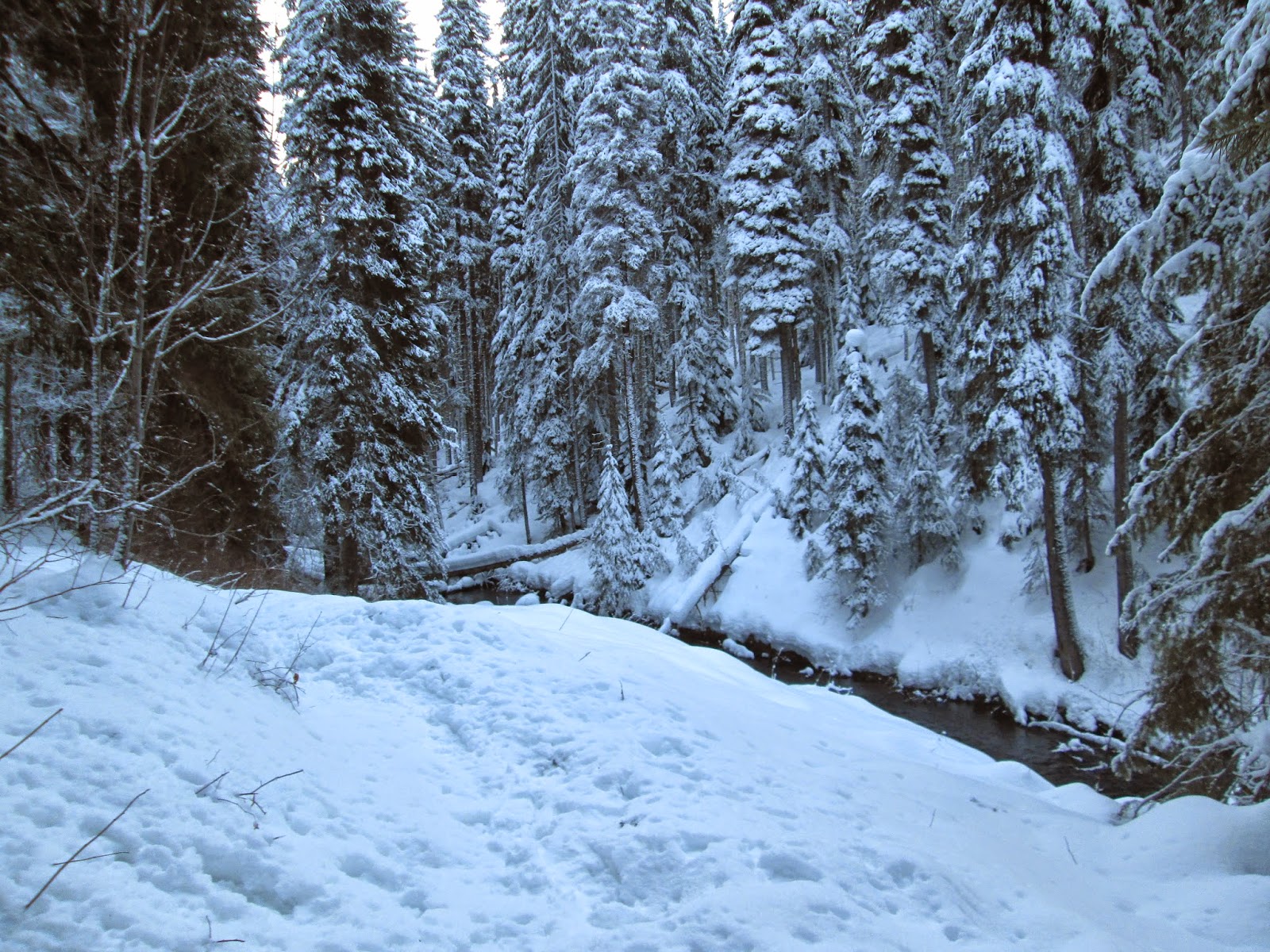 Just as I was getting close to Strike Lake, my camera died, which was kind of annoying. (Note to self: remembering to carry spare batteries isn't a bad idea.)  I was soon hiking down the lake and realized that, as no one else was likely to be on this trail, I could camp anywhere I wanted.  I picked a site part-way down the lake that had always looked like a good camping spot.  It was one of the few places along Strike Lake where you actually get a good view of the lake.

Before setting up my tent, I decided to eat my Subway sandwich.  I should note that in the summer, I hiked with Sub sandwiches for lunch quite a bit and never had any issues.  This time, however, was depressing to say the least.  The sandwich was so drenched that I think I actually could have rung it out like a rag.  I tried eating some of it, but it was wet enough to be unpalatable.  I decided to declare it a lost cause, and stuck the sandwich deep in my pack.

Setting up my tent, I put the fly on kind of crooked.  I really should have fixed this, but laziness prevailed, and I left it as it was.  This meant that I couldn't properly stake out my tent, but I didn't think it was a big deal for one night.

The rest of the day was spent lounging around and engaging in Olympic-calibre laziness.  I went to bed early, but had to get up every couple of hours to knock snow off my tent.

When I woke up, everything in my tent was soaked.  I'm guessing my laziness with the fly was the culprit.  Condensation had drenched everything, including my pants and jacket.  I groaned when I realized I would be starting the day in cold, wet clothing.

I had another discovery in this comedy of errors as I found that my boots were frozen solid.  The laces were so rigid and hard that there was no way of tying them.  The problem of tying my boots would have been quite troubling if I could have actually gotten into them.  It took a good ten minutes of pushing and pulling at my feet before I was in my very, very cold boots.  I couldn't help but laugh at all the things I had screwed up on this trip.

The trek back to Lightning Lake was pretty uneventful for most of the way.  As I made my way along the last leg of the lake, I was struck with the idea that I could hike across the lake.  There was a set of cross-country ski tracks going across the lake, so I assumed the ice was thick enough.  I was a bit nervous because I had never walked across a frozen lake before, but happily, nothing went wrong (an apparent first on this trip).  The ice was a bit thinner than I would have liked in places, but the important thing is that it didn't even crack at any point.

Back in my Jeep, I started warming up and before I knew it, I was driving home.  While I messed a lot of stuff up on this trip, I had a good time.  My trip to Strike Lake definitely whetted my appetite for snowshoeing, and I know I'll be doing a lot more of it this winter.

Posted by Clueless Hiker at 04:53 No comments: