Earlier this week I did a hike in Illal Meadows with my Dad and a friend.  Illal Meadows is located to the west of Princeton and Tulameen and just to the south of the Coquihalla Highway.  It would be a pretty easy area to access from the Coquihalla, but since I'm from Princeton we had to approach it from the other direction.  This involved going on some less than ideal roads without more than a vague understanding of where we were going.  We went off the directions in 103 Hikes (which I purchased specifically for this hike) and a bit of work on Google Earth (which could have screwed us up if they had built new roads since the satellite images were taken).

We managed to successfully find the area without getting lost which was a big relief.  To access Illal Meadows, you have to take a little spur road off of the Tulameen Forest Service Road.  This spur road is described as being accessible with high clearance 2WD before turning into a 4WD road.  The 2WD section was pretty rough on our vehicle, so we didn't even try driving the next part.  This would be one of the worst places I could think of to have a serious breakdown (my little twig arms would not be able to push a vehicle out of a place like this).

After a short ten minute walk on the spur road, we reached the washout where the trail took off from.  It wasn't long before views of Spiral Peak began to open up in the distance.  The rounded mountain was covered in a vibrant red from some of the alpine plants changing color.  It was a great teaser of things to come.

The trail soon took off into the woods.  The first bit of the trail was very overgrown, quite reminiscent of the trail up Silverdaisy Mountain.  This made me wonder if this trail was going to be more like a bushwhack, but it soon passed through the thick bush and entered a more spread out forest.  Here the trail surprised me, as it was in as good of condition as trails in most provincial parks I've hiked in.  There was minimal deadfall and windfall, and not very much overgrowth.  Since I'm pretty sure this area is Crown land, I'm not sure who maintains this, but whoever it is, they do an excellent job.

The trail began a fairly steep ascent which didn't last for too long, but it was long enough that I realized I had lost all of my conditioning and stamina from my trip to Vancouver Island.  It is kind of unfortunate that you can devote weeks, or even months, to getting in peak physical condition, and all it takes to undo that is lots of Doritos, a few cases of Coke, and binge watching Breaking Bad for a couple of weeks straight. 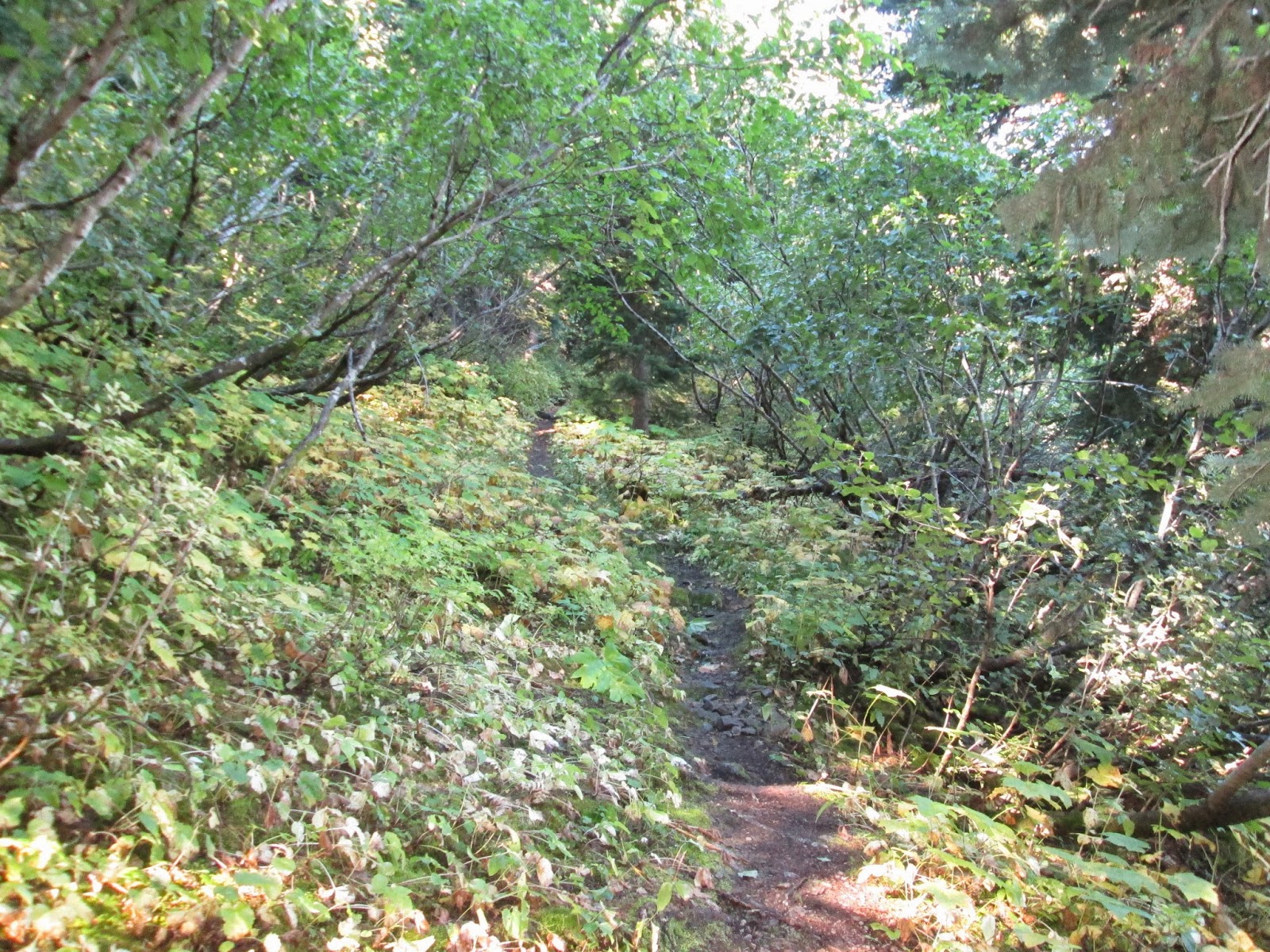 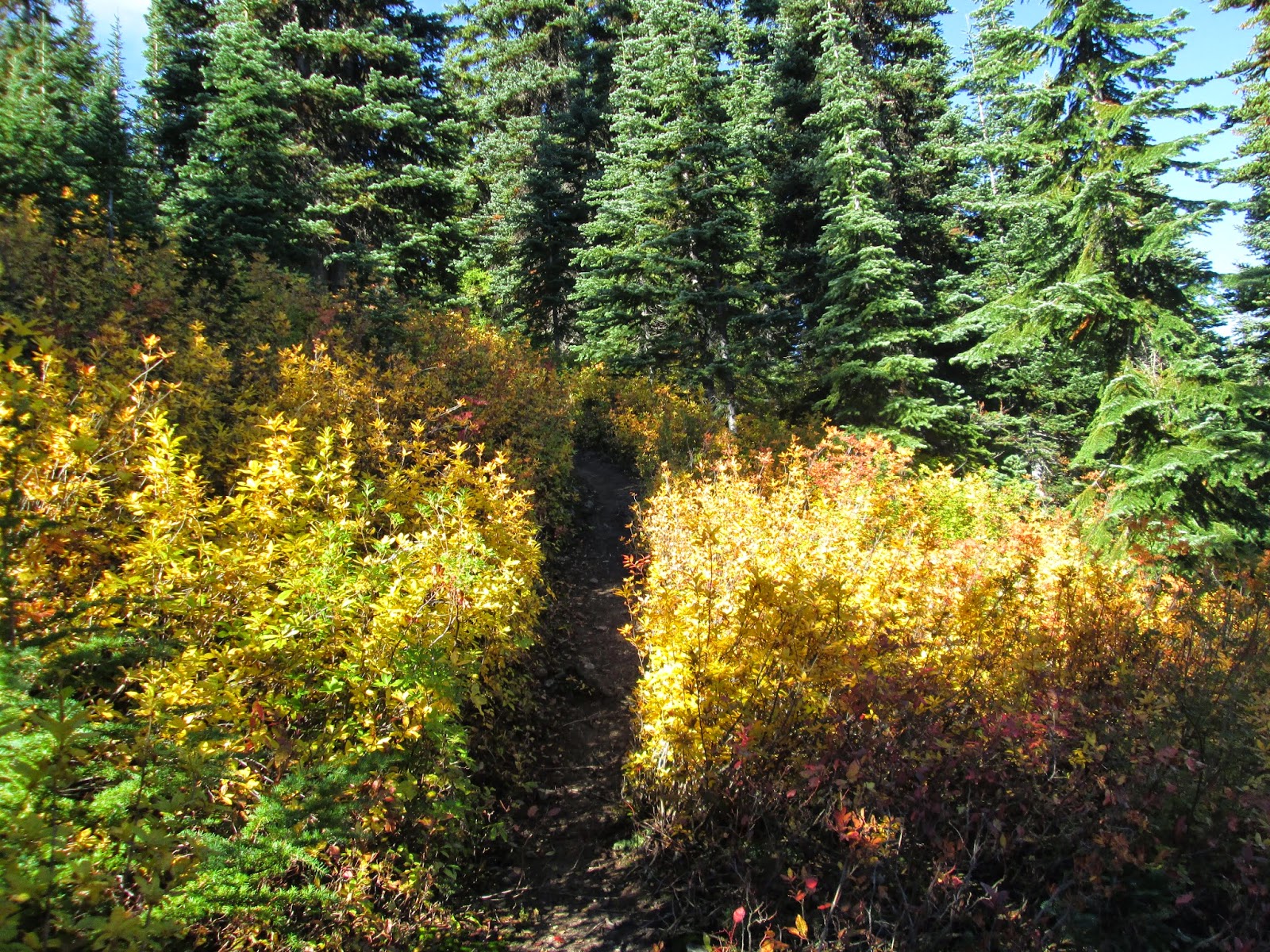 The trail crossed a rockslide and soon the meadows began to open up.  The fall colors were amazing, as the area was coated with a mix of oranges, reds, and yellows.  For the most part, the main view was still Spiral Peak, but there were teasing glimpses of Jim Kelly and Coquihalla Peaks. 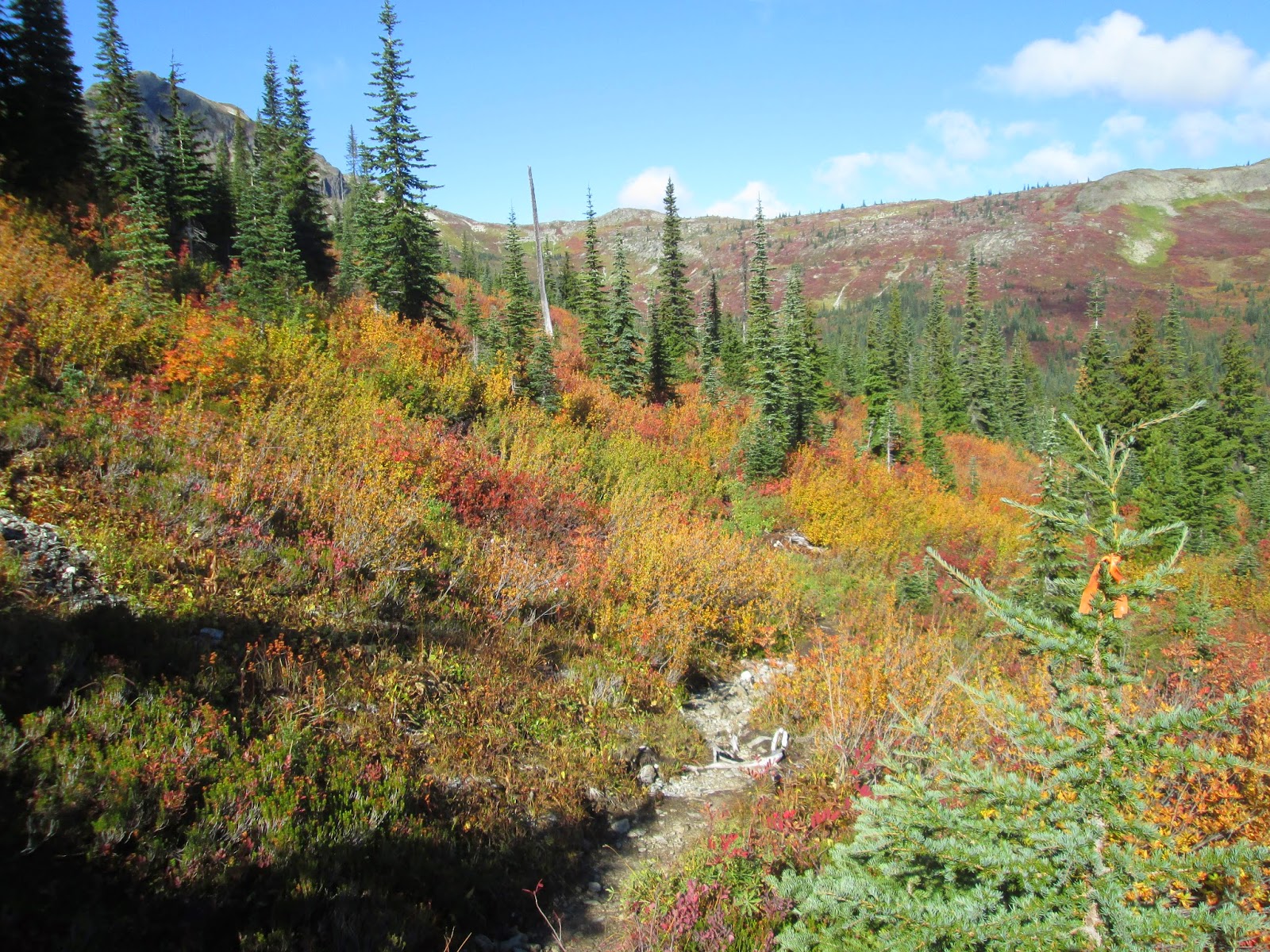 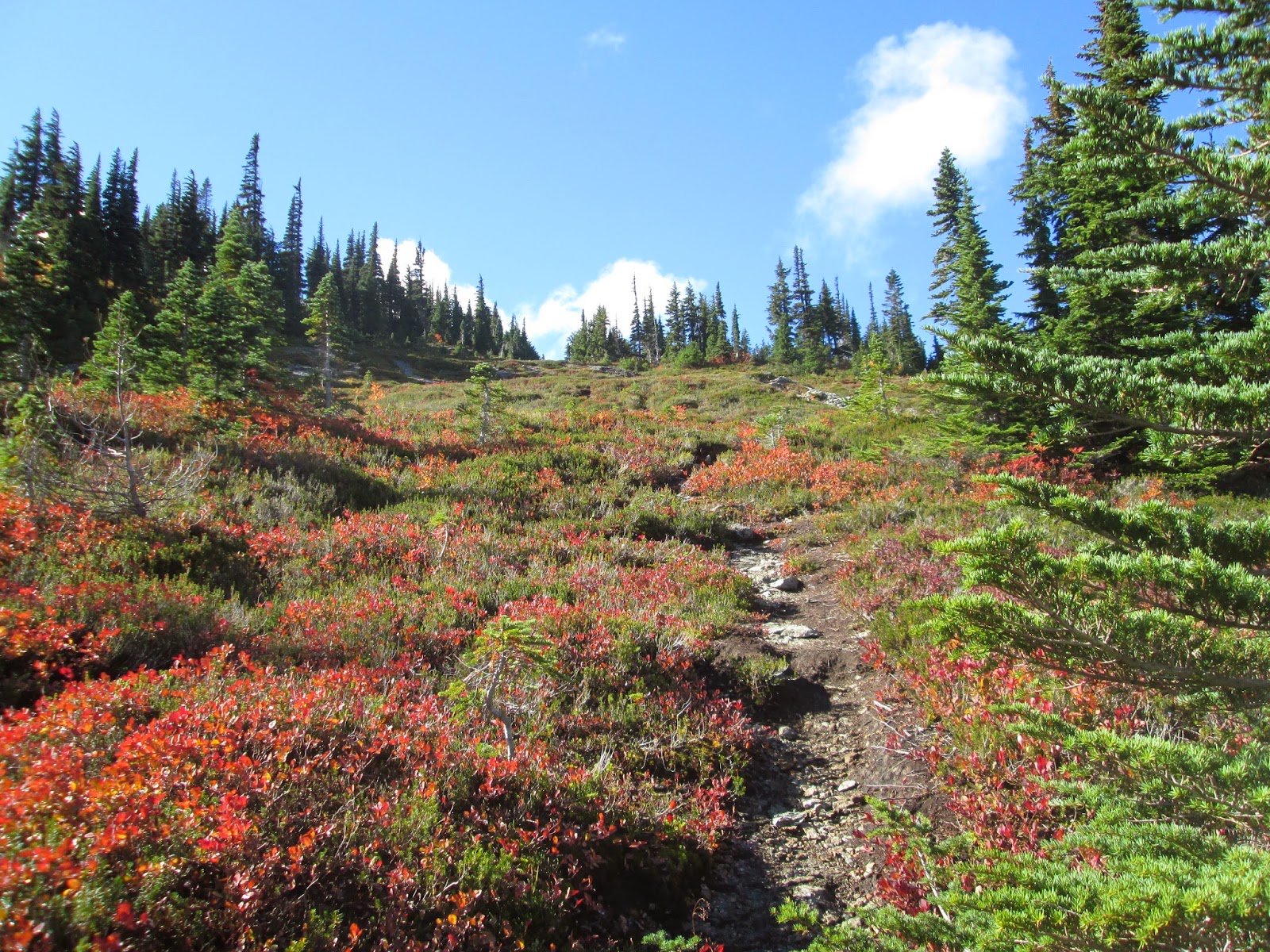 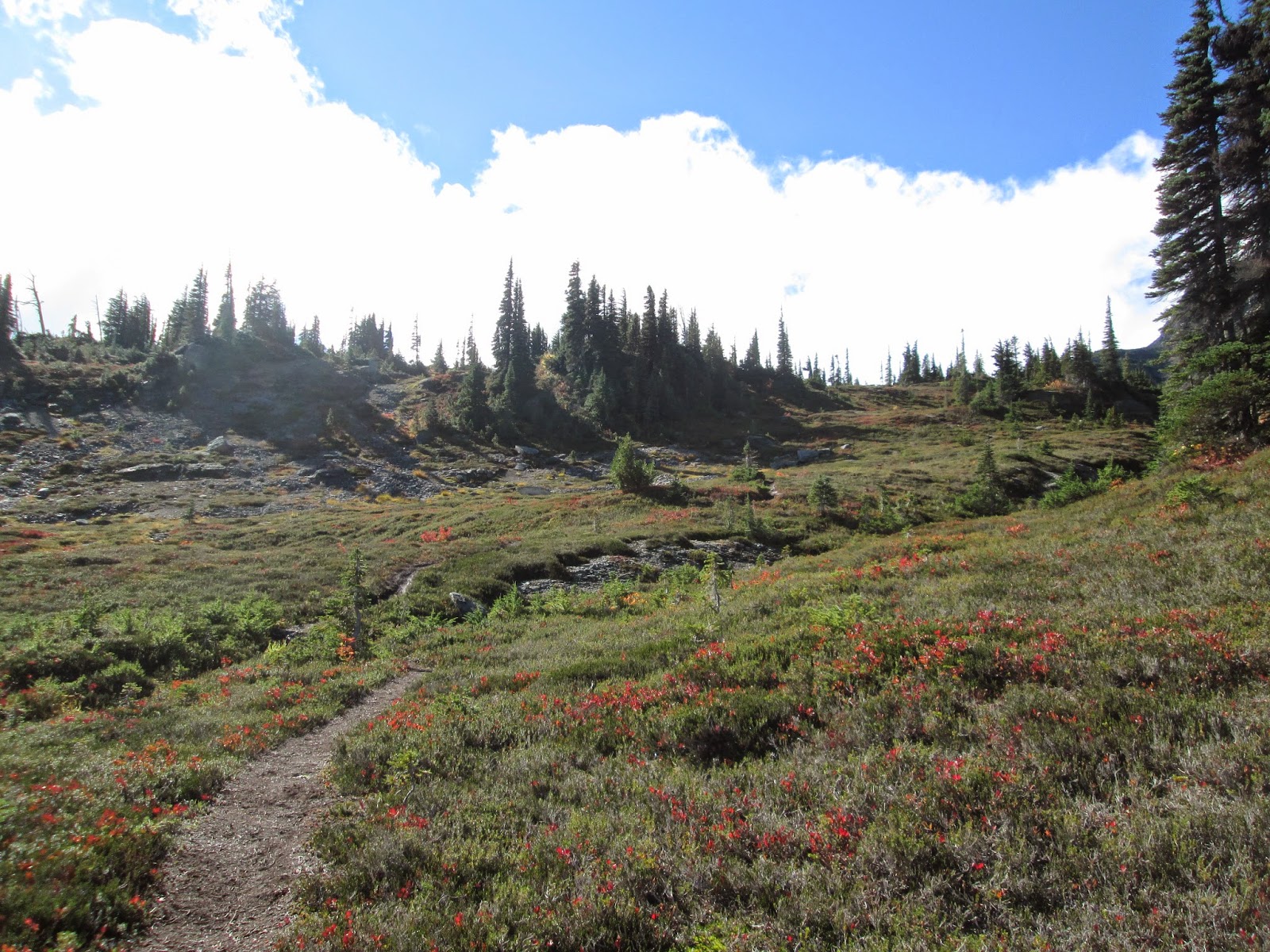 Jim Kelly Peak was the mountain we were planning on climbing, and the initial glimpses we got of it were nothing short of intimidating to me.  My Dad had climbed the mountain before in his younger days, but he is much tougher than I am (and has much better balance), so I had doubts that I would be up to the challenge.  After climbing Needle Peak, which was not nearly as scary looking, I had vertigo for the next 2 days.  I didn't know if I could do that again.  On the other hand, I acknowledged the distinct possibility that I was slowly becoming an adrenaline junky, since something about the fear was oddly appealing.

It is worth noting that the Illal Meadows area is part of the Pemberton Volcanic Belt.  The belt would have been active 21 to 22 million years ago, so all of the volcanoes are long extinct.  It is still fascinating to think of an area so close to my home as having been a hot bed of volcanic activity at some point.  There are bizarre rock formations all over the meadows which I'm assuming are largely byproducts of volcanic activity.  I believe even Jim Kelly and Coquihalla Peaks may have been active volcanoes at some point, though both are so eroded that you can't really tell. 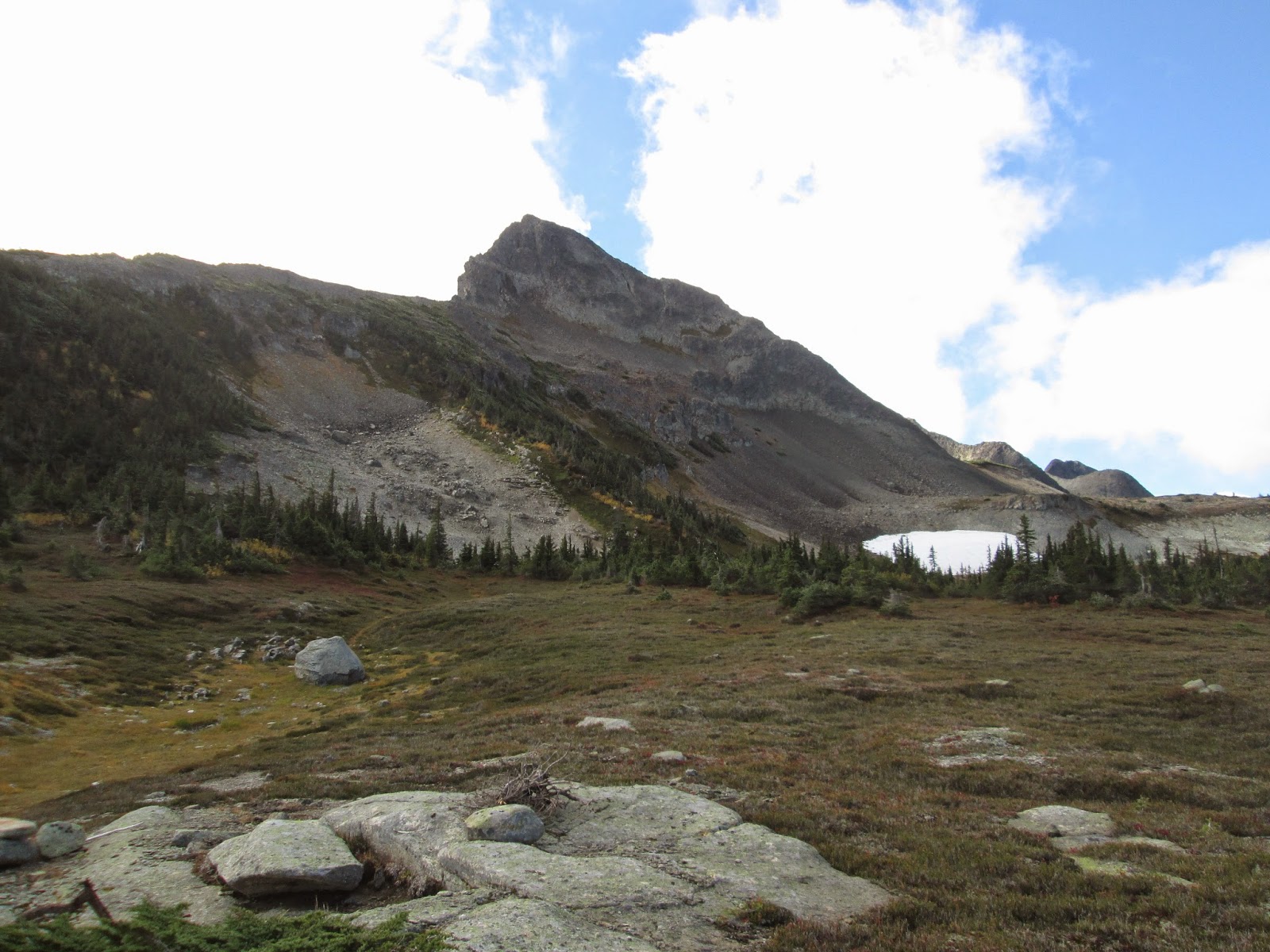 We experienced some setbacks in the meadows in the form of tasty wild blueberries, but we eventually managed to overcome this challenge and press on (this was helped by the off putting fact that many of the blueberries were mushy from being frozen).  We got to a small lake at the base of the scramble up Jim Kelly and took a break.  I went into my pack to get a bottle of water and found that I had not properly sealed the lid on one of my bottles.  I had lost a few ounces of water.  It wasn't much, but it was enough to make a sizable puddle in my fancy new backpack.

There was a short scramble leading to a little saddle between Jim Kelly and Coquihalla.  We took what I believe to be the worst possible route up this, going straight up, when there was apparently a much easier trail that switchbacked up on the other side.  This was the point of the hike in which I relinquished my role as navigator.

From the saddle, the scramble to the peak of Jim Kelly could be seen.  What I saw didn't make me feel any less nervous.  The nice thing was that a fall wouldn't mean plunging down the valley, but there were a lot of really steep looking sections, and it looked like the whole thing was on really loose shale.

In the other direction, Coquihalla Mountain could be seen, and it looked a million times more intimidating than Jim Kelly.  My perpetual death wish will likely try to send me up this mountain at some point, but I don't think I'll try it for a while.

Across the valley, the Coquihalla Summit Recreation Area could be seen, including Needle Peak.  I hadn't realized just how close this area was until now.  It was interesting to see an area I had hiked from a different angle.  It made me wonder if it would be possible to link up the two areas.  I concluded that it would be doable with a GPS and a lot of gumption.  Maybe that will be a project for next year.


The first bit of the scramble up was pretty easy, definitely not worse than anything I've done before.  Given my lack of instincts for this sort of thing, I let my friend take over as navigator, and he did a much, much better job than I would have at finding the best way up things.

One of the challenges on this climb was that often the footing was not very solid, as the loose shale would slide down sometimes at the lightest touch.  Having helmets might have been a wise idea for this.

Even the solid bits of rock were pretty loose.  I learned pretty quickly to check every single hand hold very carefully, since many of them would crumble as soon as I put pressure on them.  Being cautious made this a really slow ascent, but I wouldn't trade a faster summit for the chance of falling.  I could live with the idea of falling on the way down, because I would know that I climbed the mountain, but falling on the way up?  That would be just plain cruel! 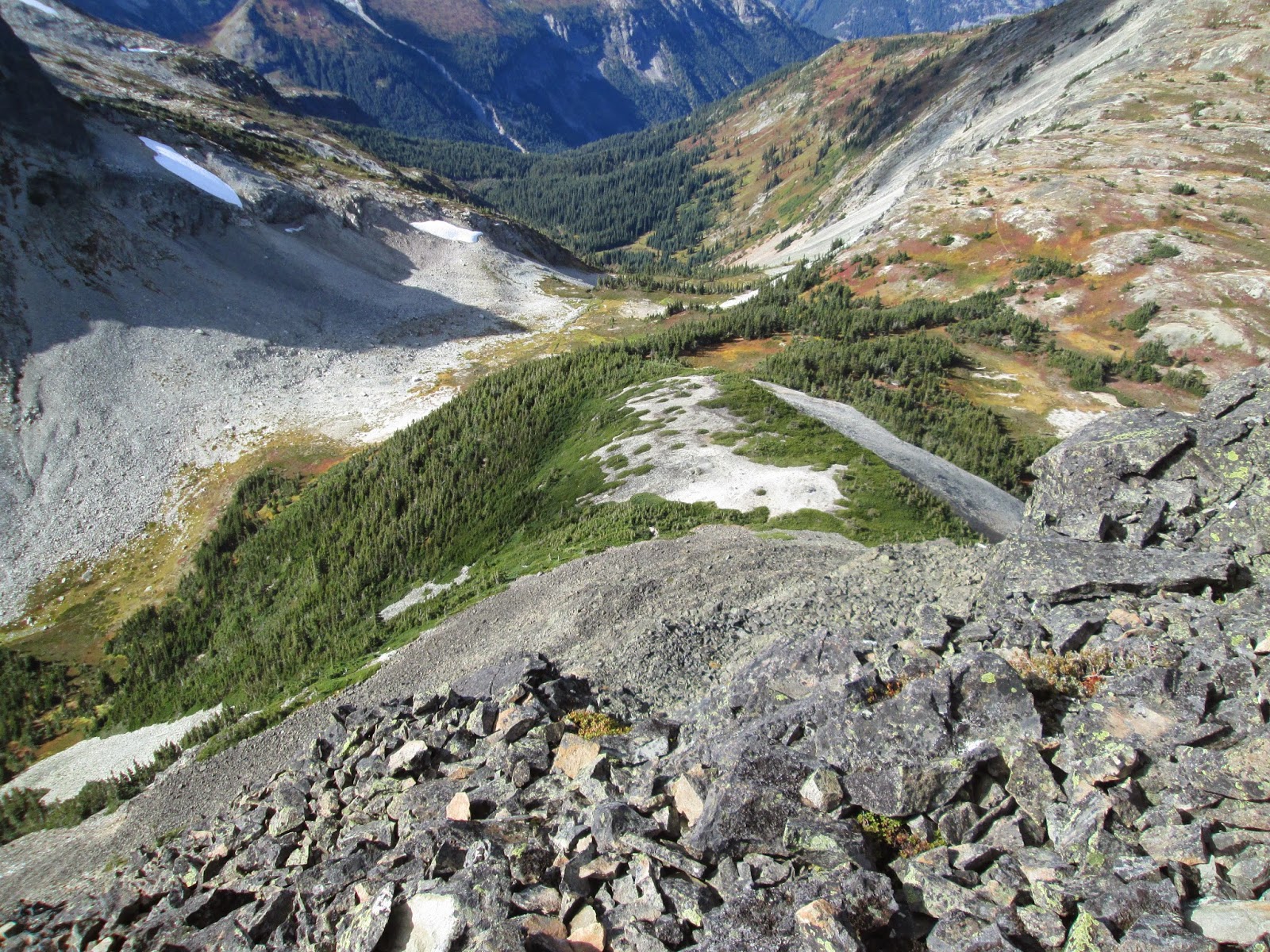 As we got higher and higher, we came to a number of false summits, each more frustrating than the last.  There were a good 3 or 4 times where I was convinced I was coming up the last stretch, only to see another climb looming ahead.  This brought back memories of Outram, but I think it was a bit worse here.

Towards the top, the lace on my left boot came undone.  I came very close to tripping over it which probably would have ended my hiking career (and maybe even my binge watching TV career).  I would not have caught this if I wouldn't have been so careful about my footing.  Realizing how close I came to falling definitely made my stomach jump up a bit.

We finally reached the summit after a much harder and scarier climb than I had anticipated.  There was a pole on top of the mountain with a little poem on it which was kind of neat, though I do have to wonder how it got up there.  I'm assuming whoever brought it up must have been either part mountain goat or a champion at that Scottish sport where they toss large poles. 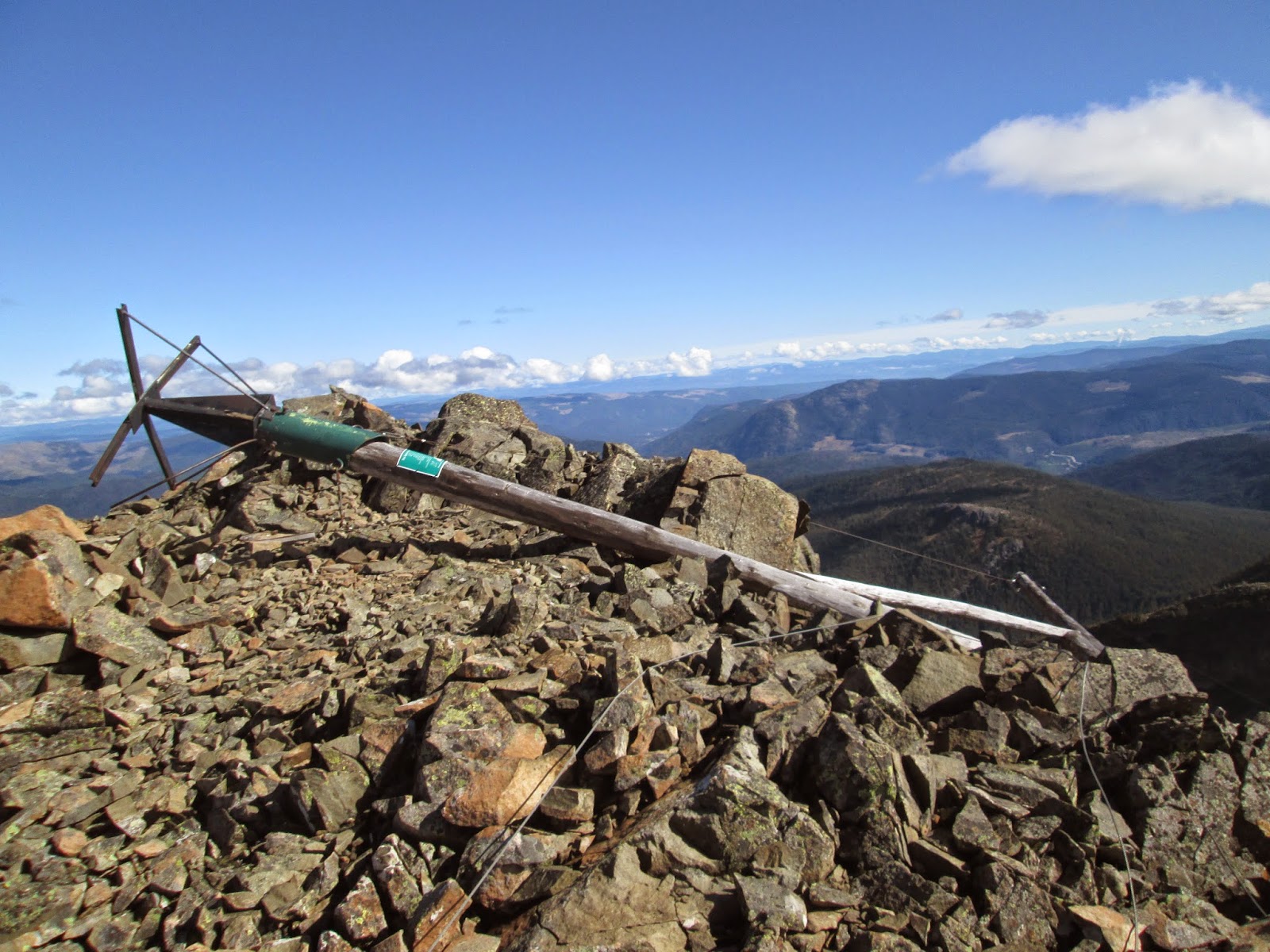 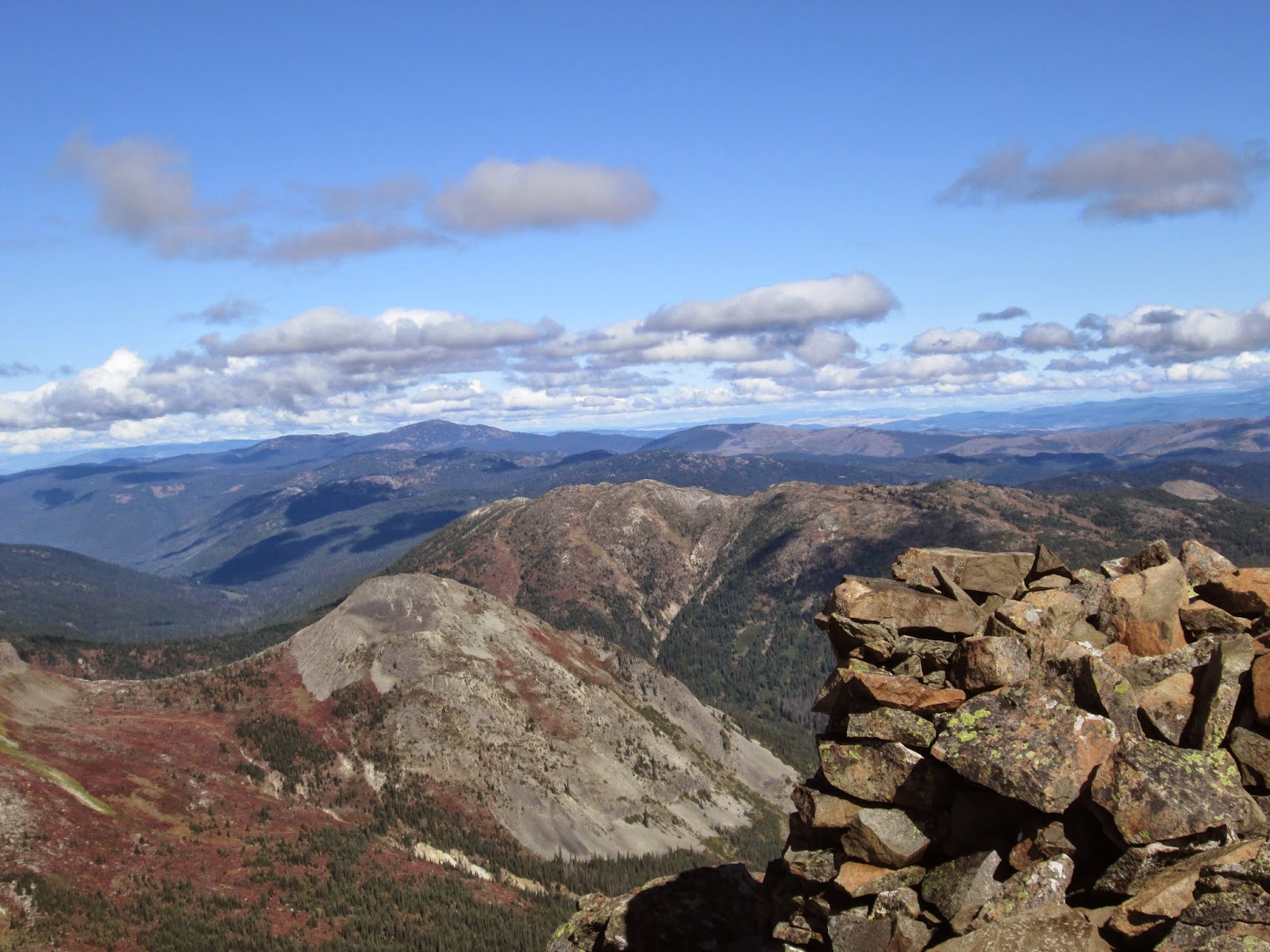 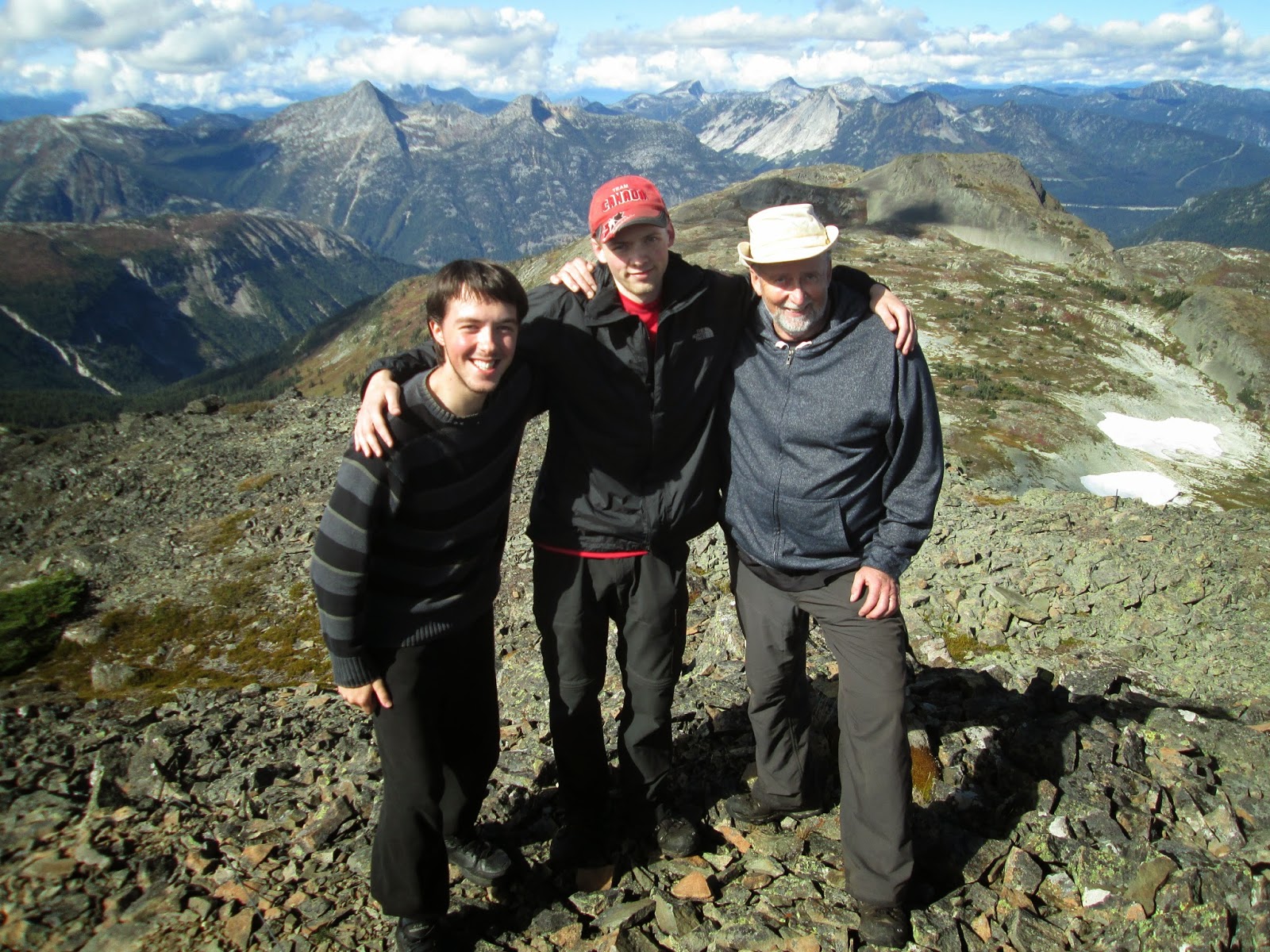 After spending some time admiring the view on top of the mountain, it sunk in that I still had to go down the scramble.  I made my descent using a really weird looking technique that has never failed me.  Contrary to what I'm pretty sure you are supposed to do, I went down facing out, with my butt planted close to the ground, moving a bit like a crab.  When I do this I know it looks ridiculous, but it makes it a lot easier for me to recover if I'm falling.  I'm sure real mountaineers would scoff at this, but hey, if it works, it works.

The rest of the hike down went pretty smoothly.  We got back at our vehicle in good time, having taken around 8 hours to hike up and back.

I'm really glad to have gotten a chance to explore this area.  I know I'll be back to climb some of the other peaks in the area.  Accessing the meadows is a bit inconvenient, but on the other hand, the tough access means it isn't bogged down with a lot of hikers.  Even with its inclusion in 103 Hikes, I feel like this is still a fairly undiscovered gem.  Selfishly, I hope it stays that way.  The meadows are still in pristine condition, and it will be a shame when they get trampled down.  It would also really suck to have to ascend Jim Kelly behind a long line of people, each sending a multitude of rocks tumbling towards you.  I guess that probably means I shouldn't blog about the area, or at the very least, I shouldn't give it a good review.  So with that in mind, don't go to Illal Meadows.  The place is awful, smells like mothballs, probably is full of radiation, and may very well be populated by sentient rock people who eat humans. 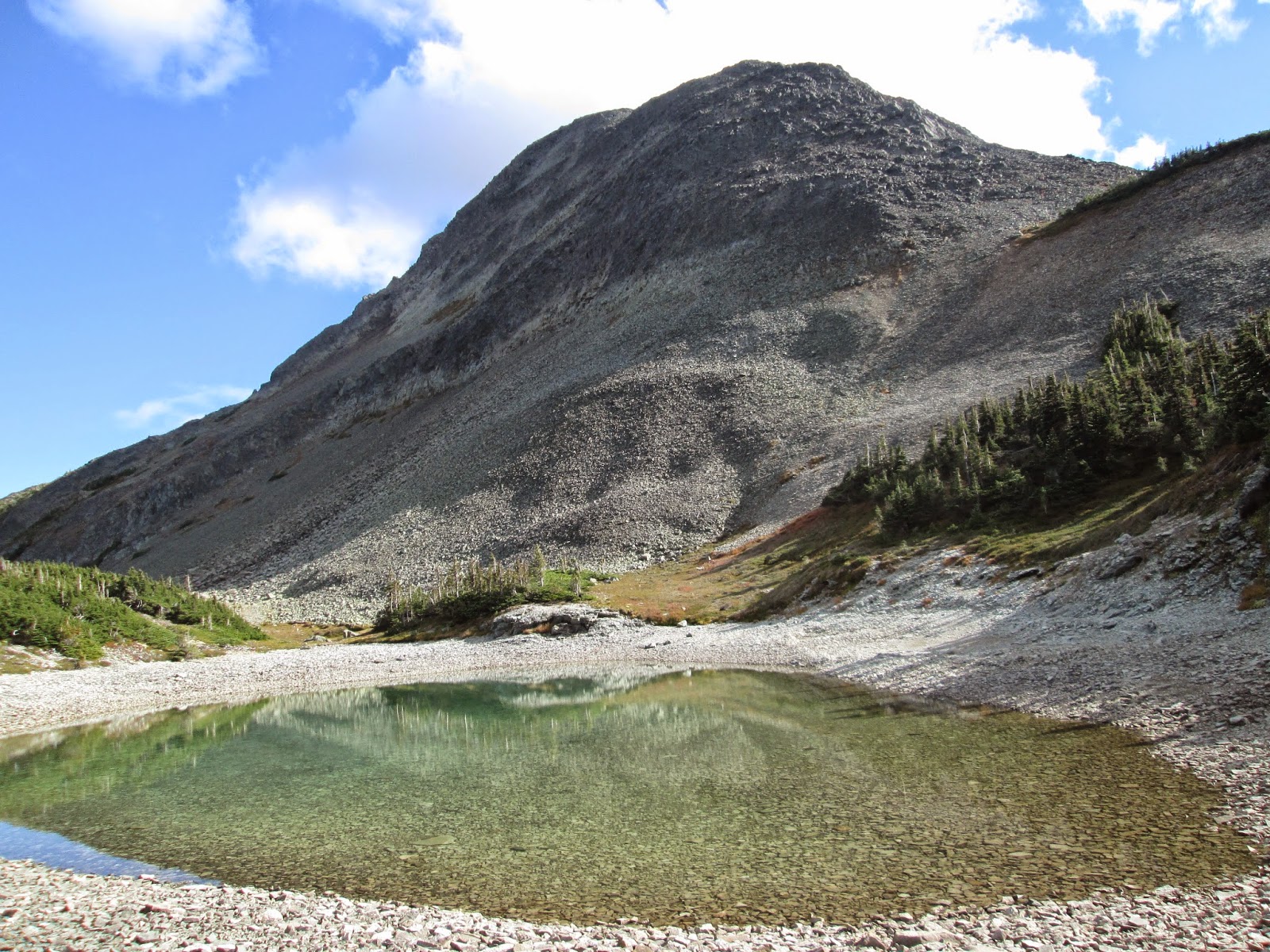 Posted by Clueless Hiker at 02:58 No comments: