Day 6 began the way Day 5 had ended: with a heavy downpour of rain.  It had rained through the whole night, and when I woke up, I realized that there was a good chance I would have to take down my tent in the rain.  This wasn't as troubling as it normally would be since I wouldn't be spending another night in it for a few days, so I would probably get a chance to dry it out, but I still hate getting my hiking gear wet.

I only had 3 km to hike and my shuttle to Port Hardy wasn't due until 1:00-2:00 PM, so I stayed in my tent as long as I could, hoping for a break in the rain.  I had no such luck, so when 10:30 rolled by, I tried to do the fastest tent tear down of my life.  It was made difficult by the fact that the tent pad and surrounding boardwalks were all soaking wet and extremely slippery.  I got my tent put away in record time and departed around 11:00. 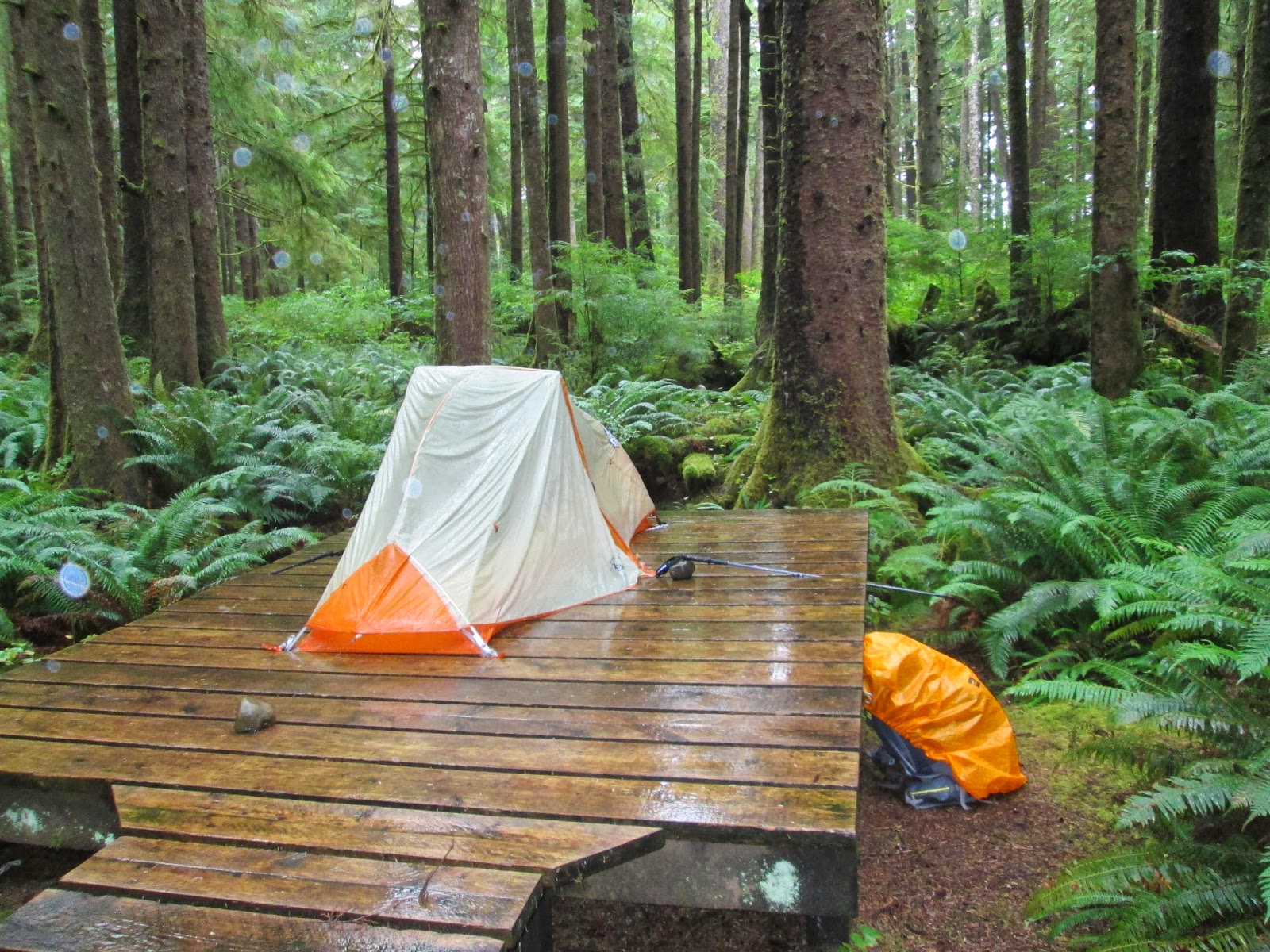 The hike to the parking lot was easy, though there were still a few muddy sections to trudge through.  As I got closer and closer to the parking lot, I realized I was on the verge of doing a North Coast Trail hike without a single fall.  I thought this was pretty amazing given my propensity to falling.  To be fair, I had plenty of close calls where I was saved by my hiking poles, but I hadn't actually ended up on the ground yet.  Given the number of falls I had on the West Coast Trail, I thought this was quite an achievement. 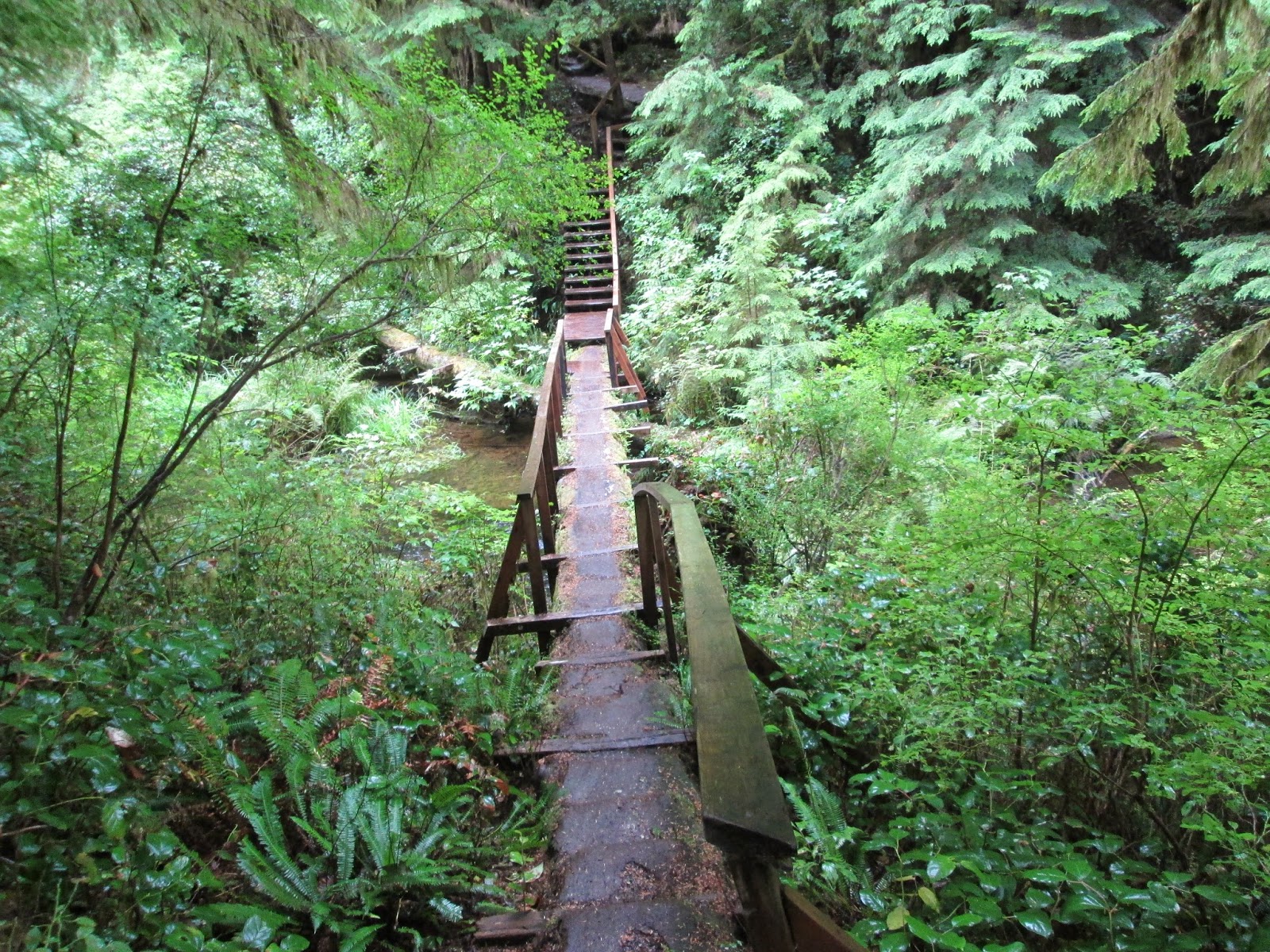 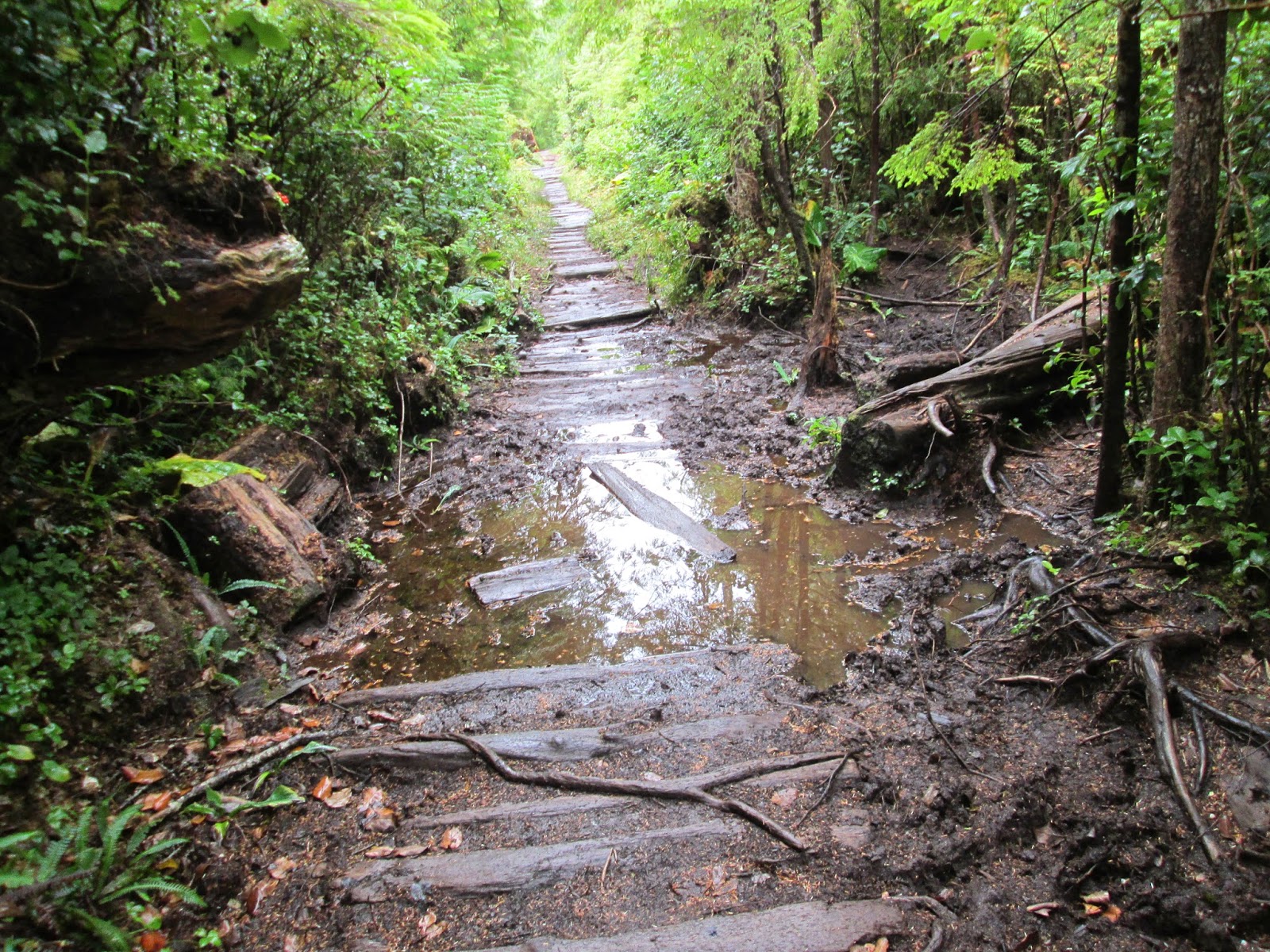 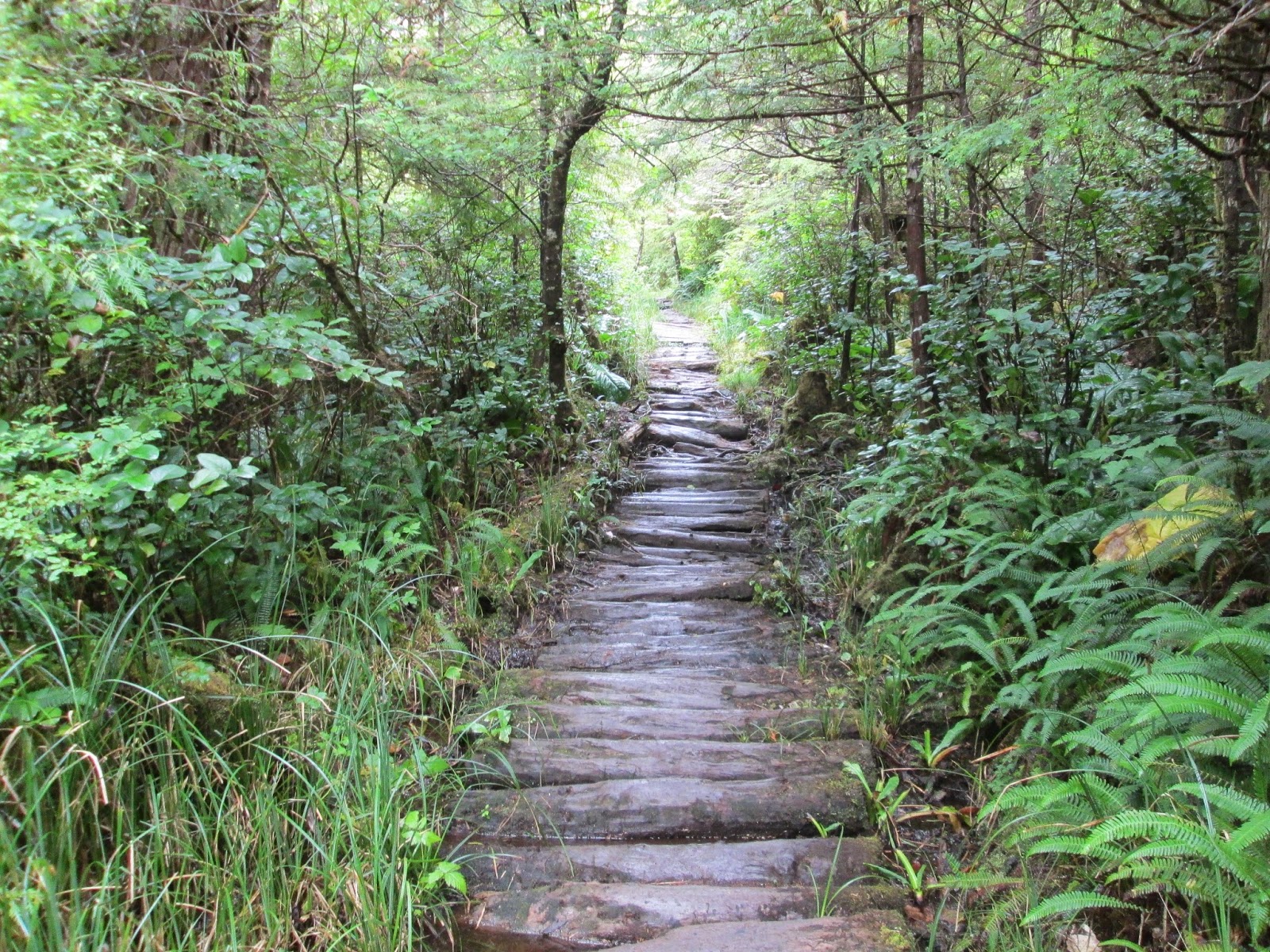 The last 900 meters or so were on a very well made gravel footpath.  This section of the trail is why I would never recommend doing a NCT hike for the first time starting at the parking lot.  You could get lulled into a pretty big false sense of security 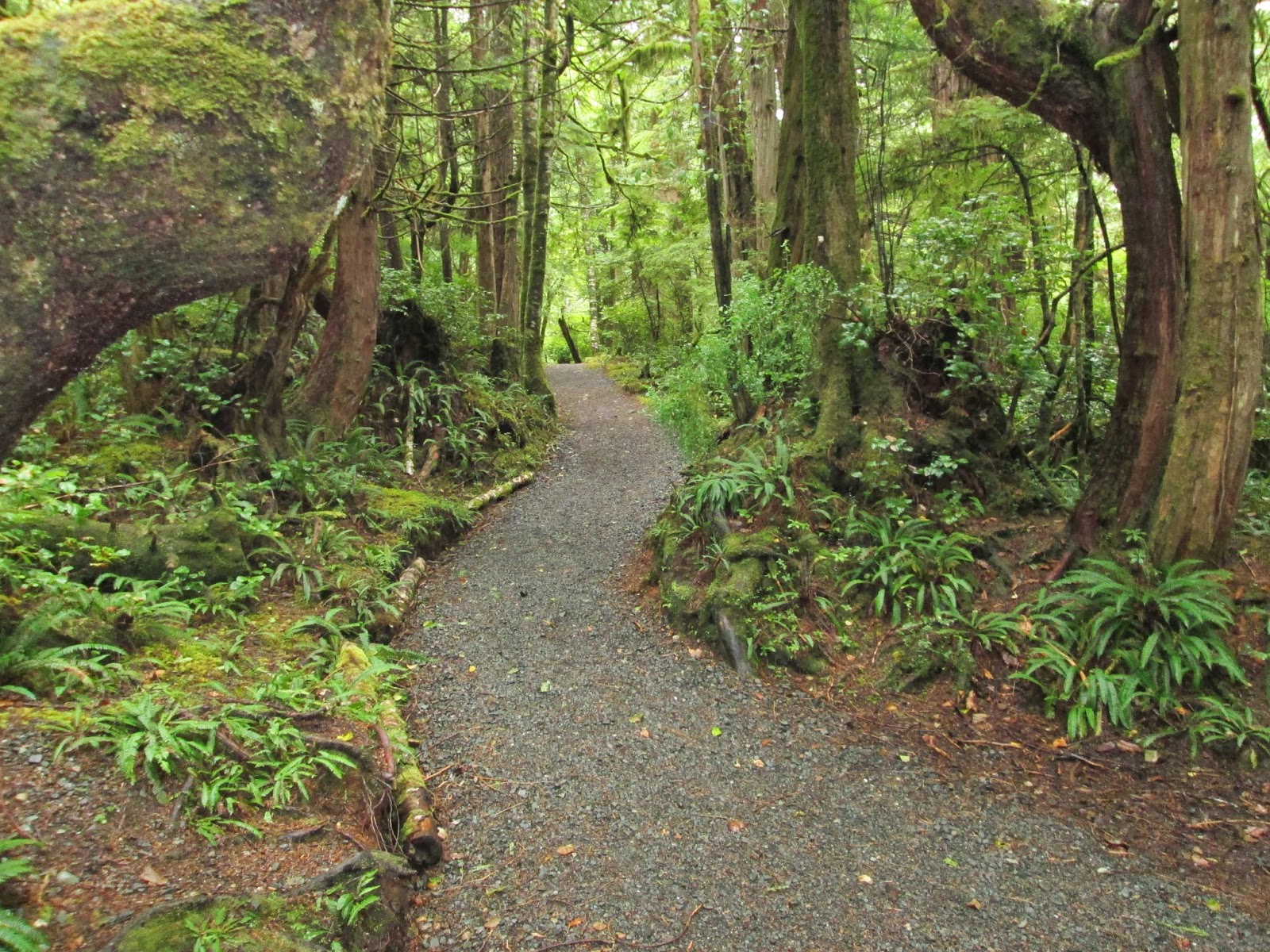 I finished the trail a few minutes later, feeling a rush of joy when I realized that I had actually successfully hiked the NCT.  Before I had left, a part of me had wondered if I had bitten of more than I could chew.  I had sort of expected this hike to be miserable and painful, and I had fully expected to spend the whole time counting down the days until I was off the trail.  It was insanely rewarding to not just do such a daunting hike, but to enjoy it too.


The shuttle arrived early, and the other hikers who were taking it weren't far behind, so we got to leave the parking lot much sooner than I had expected.  The shuttle driver was really friendly and knowledgeable of the area.  He stopped at the famous "Be Prepared for the Unexpected sign" and the shoe tree.  Both were kind of funny attractions.


We stopped in Holberg, a tiny community west of Port Hardy.  We went to the Scarlet Ibis Pub where I had one of the most satisfying meals of my life.  After 6 days in the bush with no hot food at all (yes I hike without a stove), having a filling, hot meal was mind-blowing.  I was impressed that such a small village could have such a good restaurant in it.  It was one of the highlights of the whole trip for me.

Back in Port Hardy, I checked into the North Coast Trail Backpackers Hostel again.  The people there were nice enough to set up an area for me and another hiker to dry our tents.  This was really helpful for me, since it meant I could start the Juan de Fuca Trail with a dry tent.

I bought my bus ticket for the next day, had a filling dinner at Captain Hardy's, and went to bed much later than I had in a while (7:00 PM is my hiking bedtime).  I had finished the NCT and could look forward to starting the Juan de Fuca Trail in a couple of days.