I woke up on Day 5 to fairly optimistic looking skies.  I thought perhaps I might get my first full day on the North Coast Trail without rain of any kind.  The thought of bad weather was a little less daunting at this point, knowing I only had one more night on the trail before I could look forward to a warm, dry bed in Port Hardy. 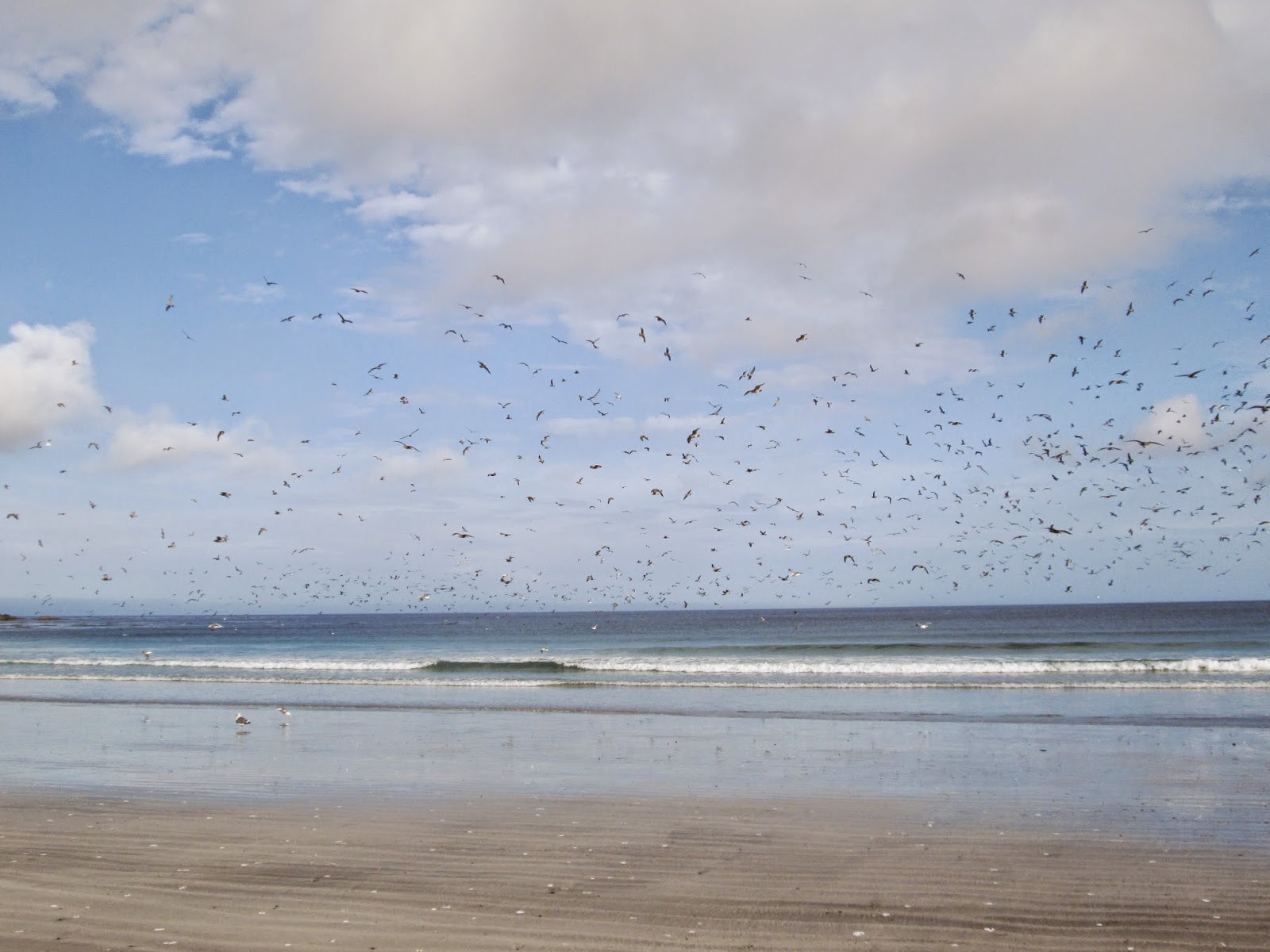 My final destination for the day was to be Eric Lake which is 3 km from the Cape Scott Parking Lot.  However, I wanted to make a side trip to Nels Bight since I had heard it was one of the highlights of the park.  My original plan had been to hike all the way to the lighthouse and camp at Nels Bight, but the appeal of having only 3 km to hike on Day 3 won out.

As soon as I hiked to the end of Nissen Bight and got onto the Cape Scott Trail, I knew I was going to be on a very different sort of trail for the rest of my hike.  It was more along the lines of the trails I was used to hiking, well defined and extremely well cleared.  There were still muddy sections and a few awkward things to scramble over, but it was like a freeway compared to the NCT.

In a way it was a little sad to be done with the NCT.  Some aspects of the trail are frustrating, but those are the aspects that make it a unique adventure.  It was strange to be done with the near-isolation too.  I saw more people in a few hours on the Cape Scott Trail than I had seen on the entire NCT.

My understanding was that the Cape Scott Trail had very minimal elevation change, and I found that to be very true.  The climbs that did exist on it were fairly gradual, and it was really easy to hike fast after days of having to watch every single step I took. 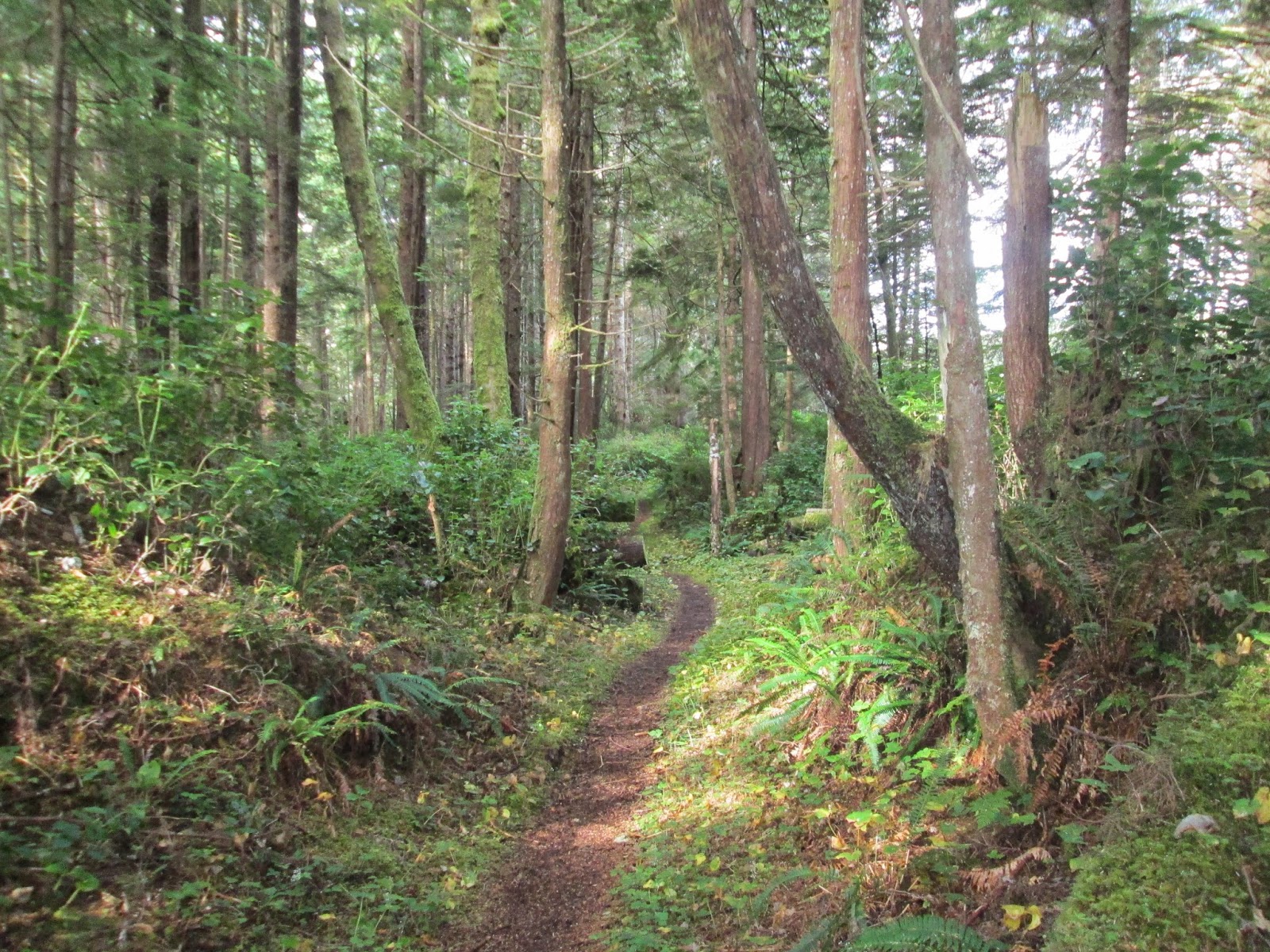 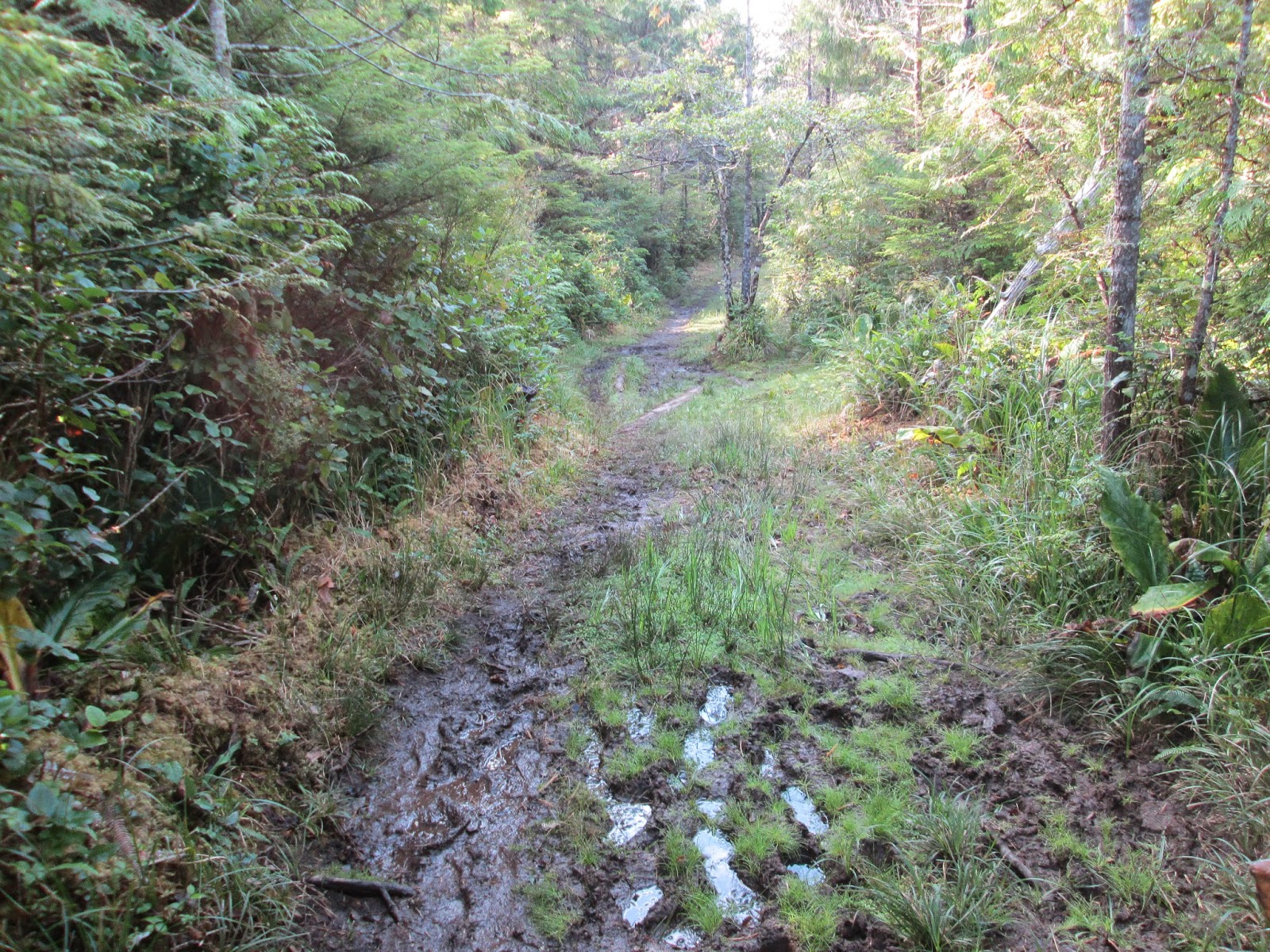 Despite the sense of being on a wilderness adventure being gone, the Cape Scott Trail was still a fascinating trail to hike.  It went through an area that had been settled in 1897 (by people who were clearly much braver than me).  It was a Danish settlement that failed in part when the government backed out of agreements to build roads to link it up to Holberg.  The settlement failed in 1909, but another one was attempted in 1913.  This one lasted until 1917, failing largely due to conscription for the First World War.

There were all kinds of remnants of the settlements.  Some were pretty obvious, like rusting farming equipment, while others were more subtle, like mossy mounds marking areas where buildings once stood.  The trail itself was clearly an old settler's road in places.  Hiking through this area felt like taking a walk through the past.  I have to admire the courage of the people who chose to settle in such a hostile and remote area. 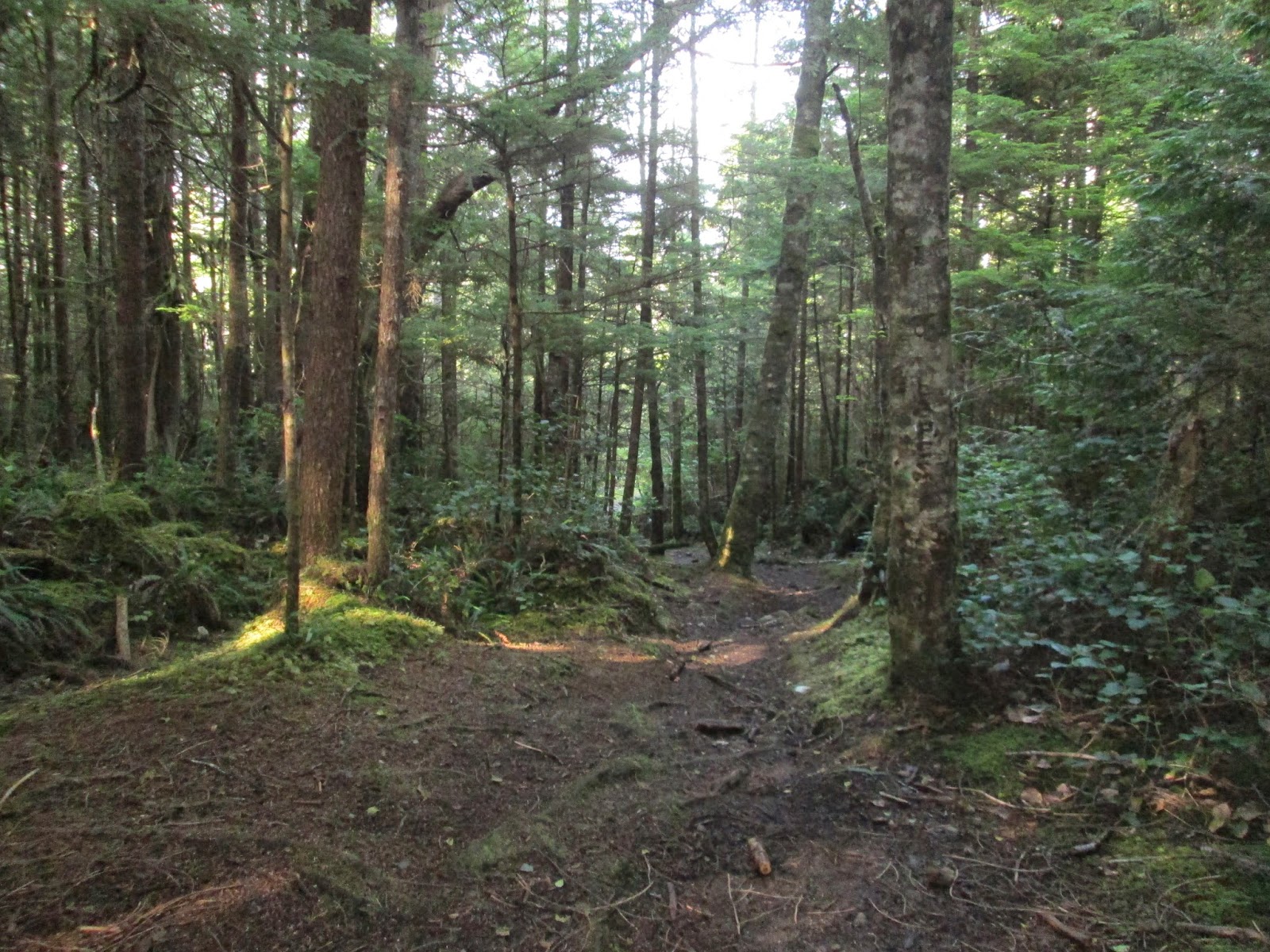 A bit of hiking towards Nels Bight brought me to the area where the settlers had attempted to grow crops.  There were more remnants of the old settlement here, including quite a few fence posts that were still standing.  The remains of the second dyke built by the settlers could also be seen.  The first dyke they built was destroyed during a particularly bad storm, so they built it again, paying attention to tides, prevailing winds, and other things that I barely have any kind of a grasp on. 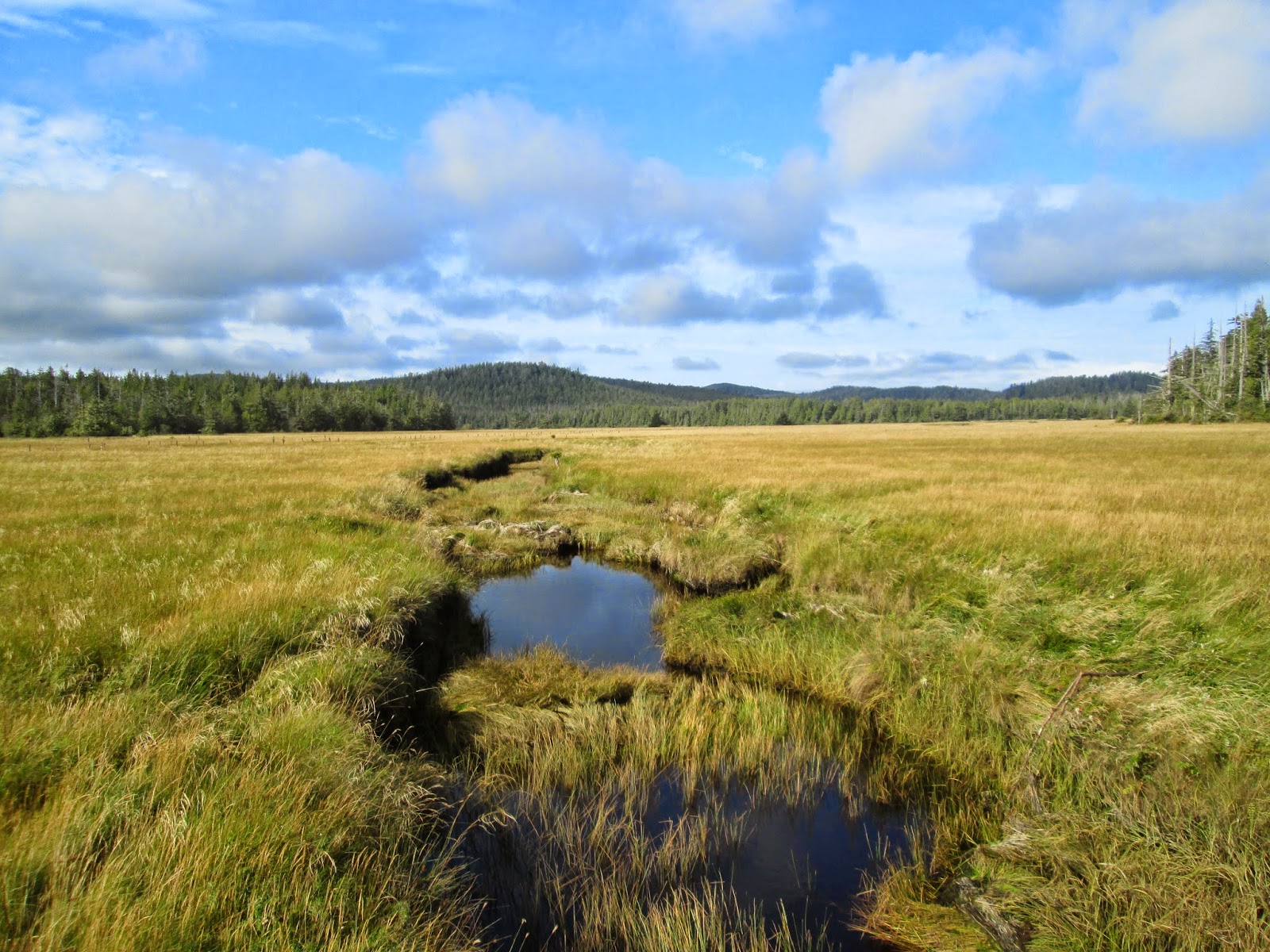 A little while later I made it to Nels Bight, a 2.5 km long sand beach.  I would definitely agree that it was one of the highlights of the park, but I am glad I didn't camp there.  It was easily the most popular camping spot in the park, with the beach being covered with tents.  It was certainly a worthwhile side trip, but as a fairly solitary camper I don't know that I would have enjoyed camping there. 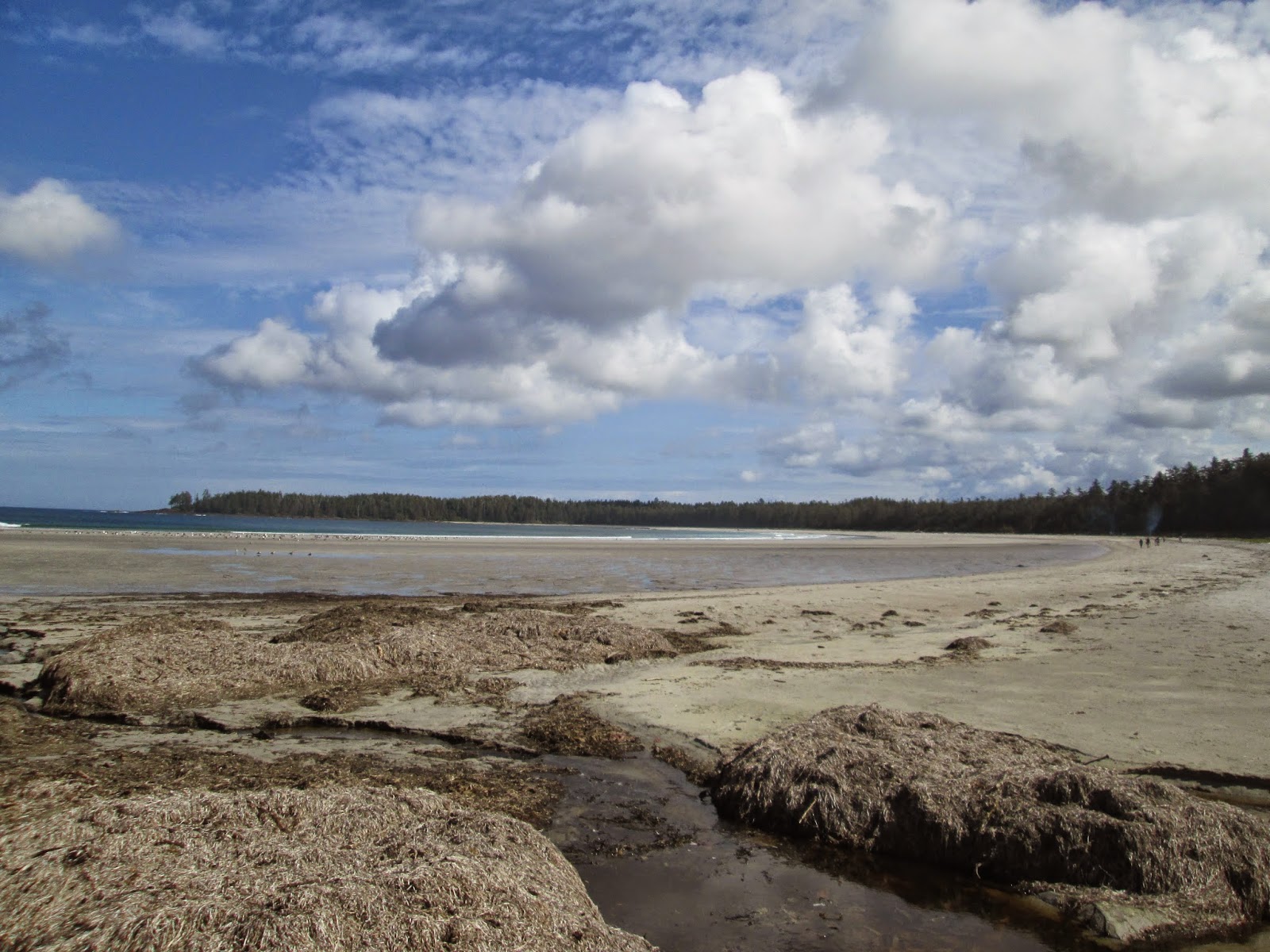 I found a camp area where I could take my tent out to do my daily drying ritual.  I made a point of not tying it as well as the last time.  I ate my lunch, which today was crackers and some hummus that I was fairly certain was going bad.  After lunch I went to the water source and filled up on some very green looking water. 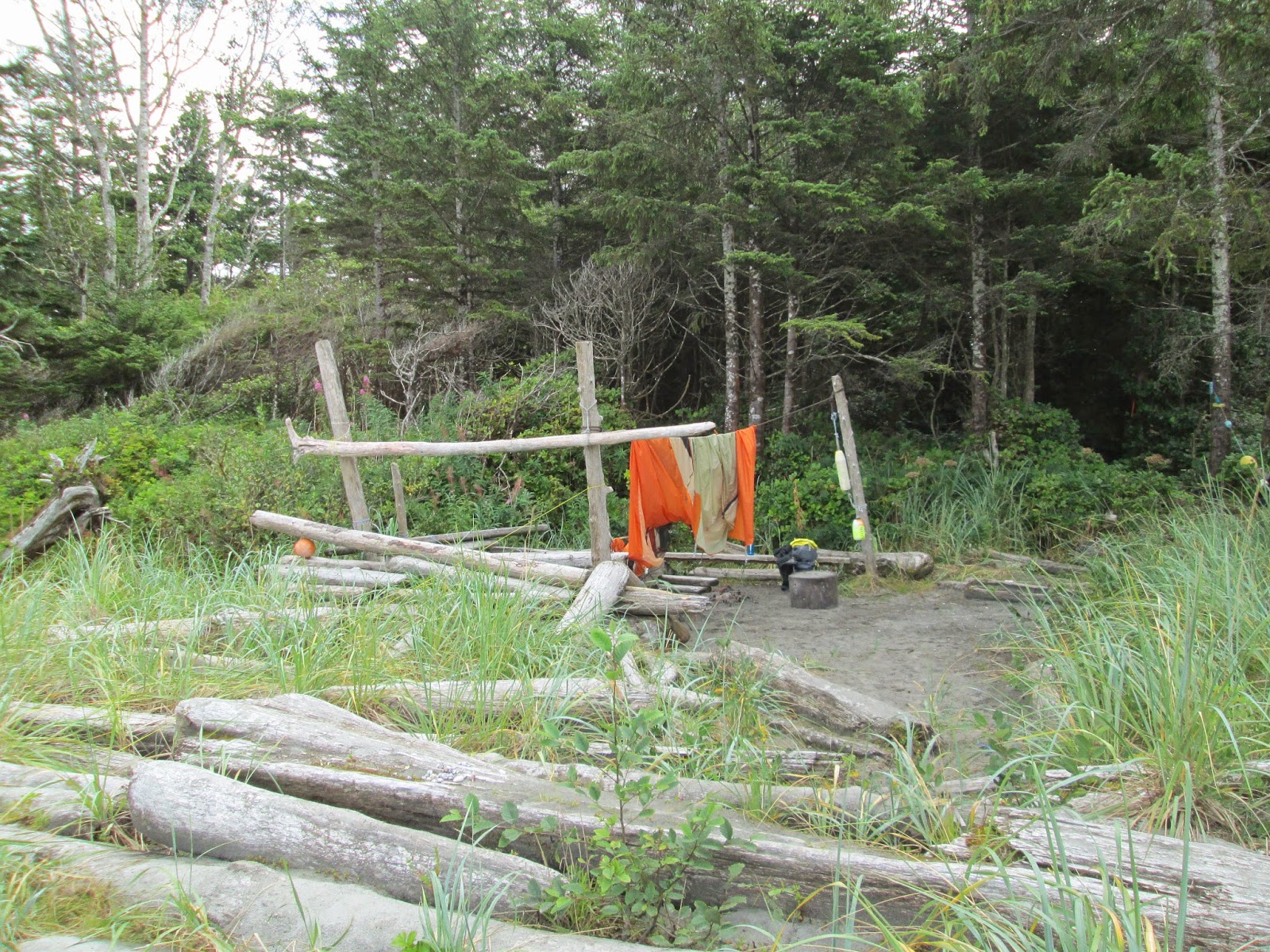 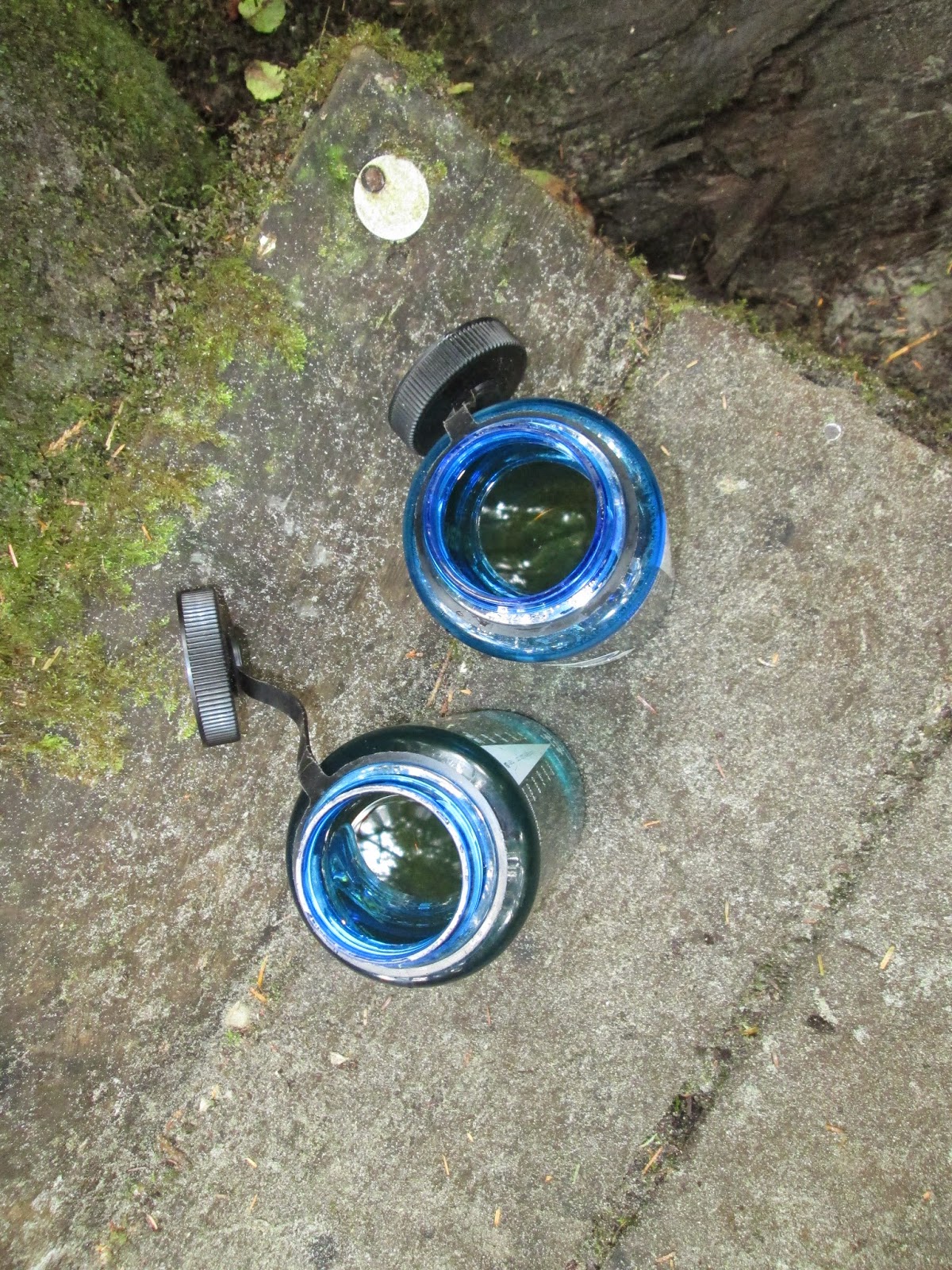 I got pretty sick when I got home from my trip.  I treated all of the water that I drank on my NCT hike and my Juan de Fuca hike, but this water was a little colourful, and I don't think I waited the full 30 minutes I was supposed to before I drank it.  I can't confirm what got me sick (to be honest it could have been the expired hummus), but it was definitely a lesson to be more careful in the future.

As I was leaving, dark clouds starting rolling in again.  By the time I was back on the Cape Scott Trail, it was raining, alternating between a light sprinkle and an occasional heavy downpour. 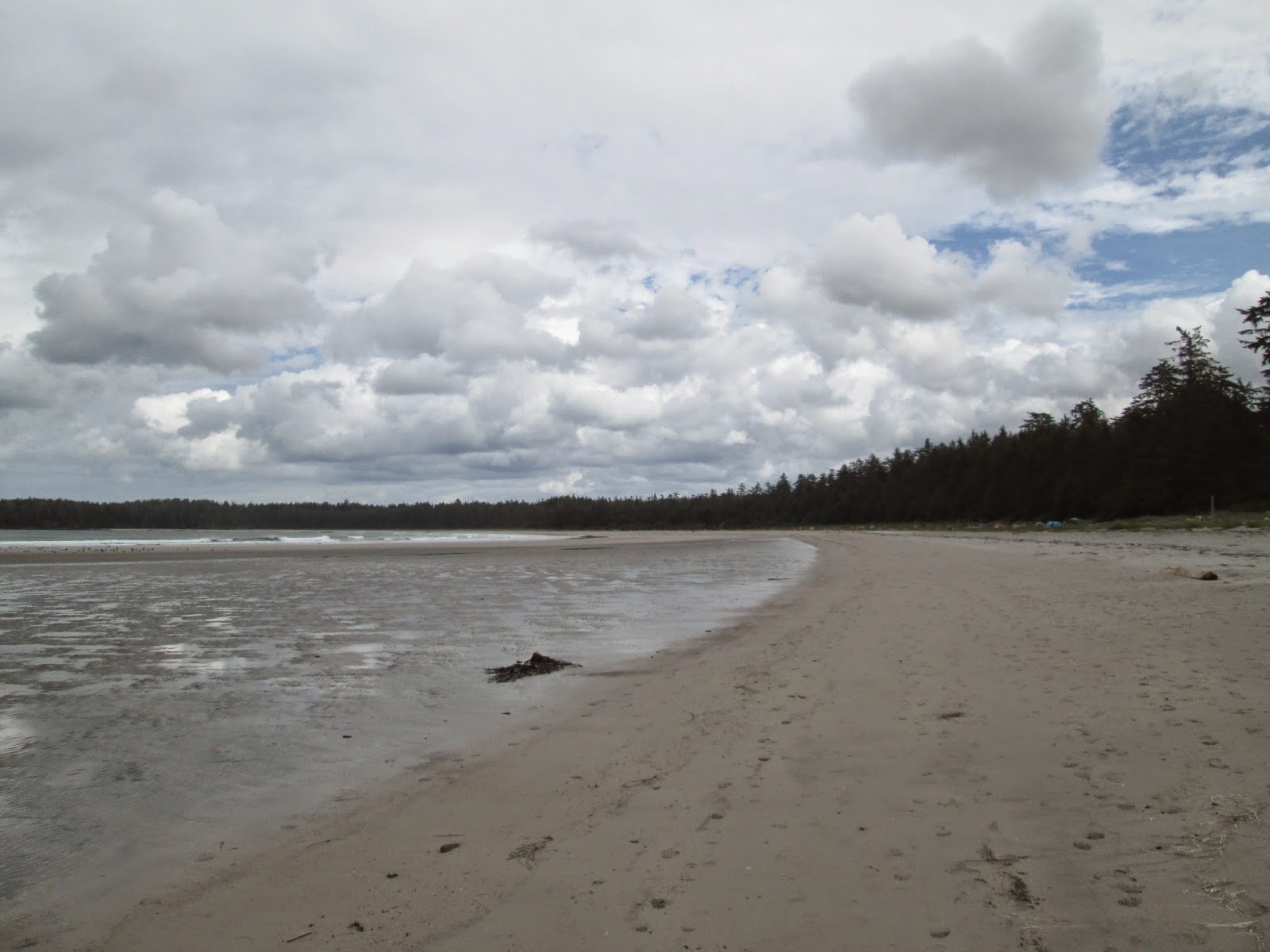 I hiked at a fairly brisk pace for the rest of the day.  The trail was pretty easy, but the rain made things quite slippery which was a bit of a challenge.  I watched many people fall on the boardwalks and found it quite fortunate that I didn't have any tumbles. 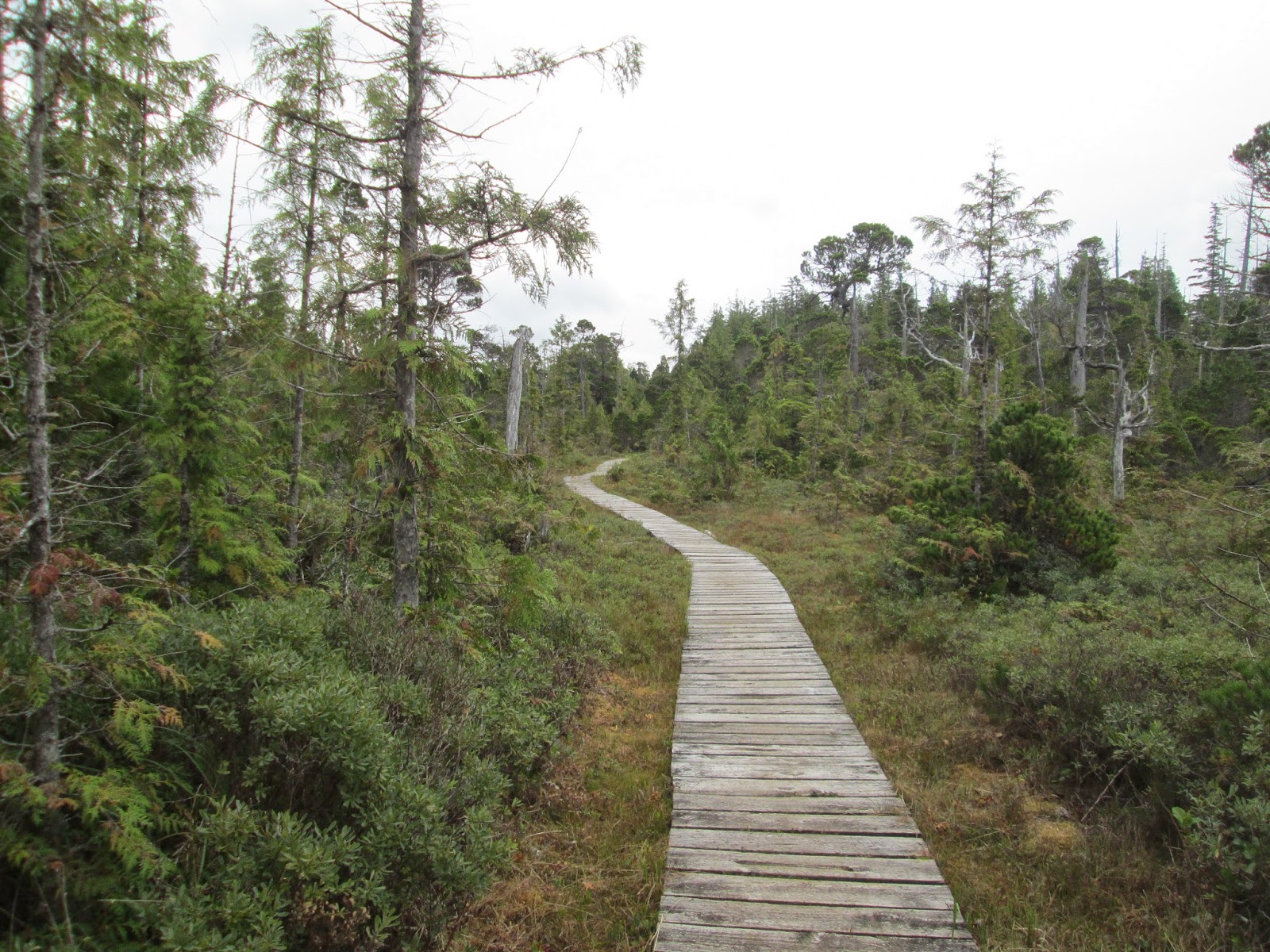 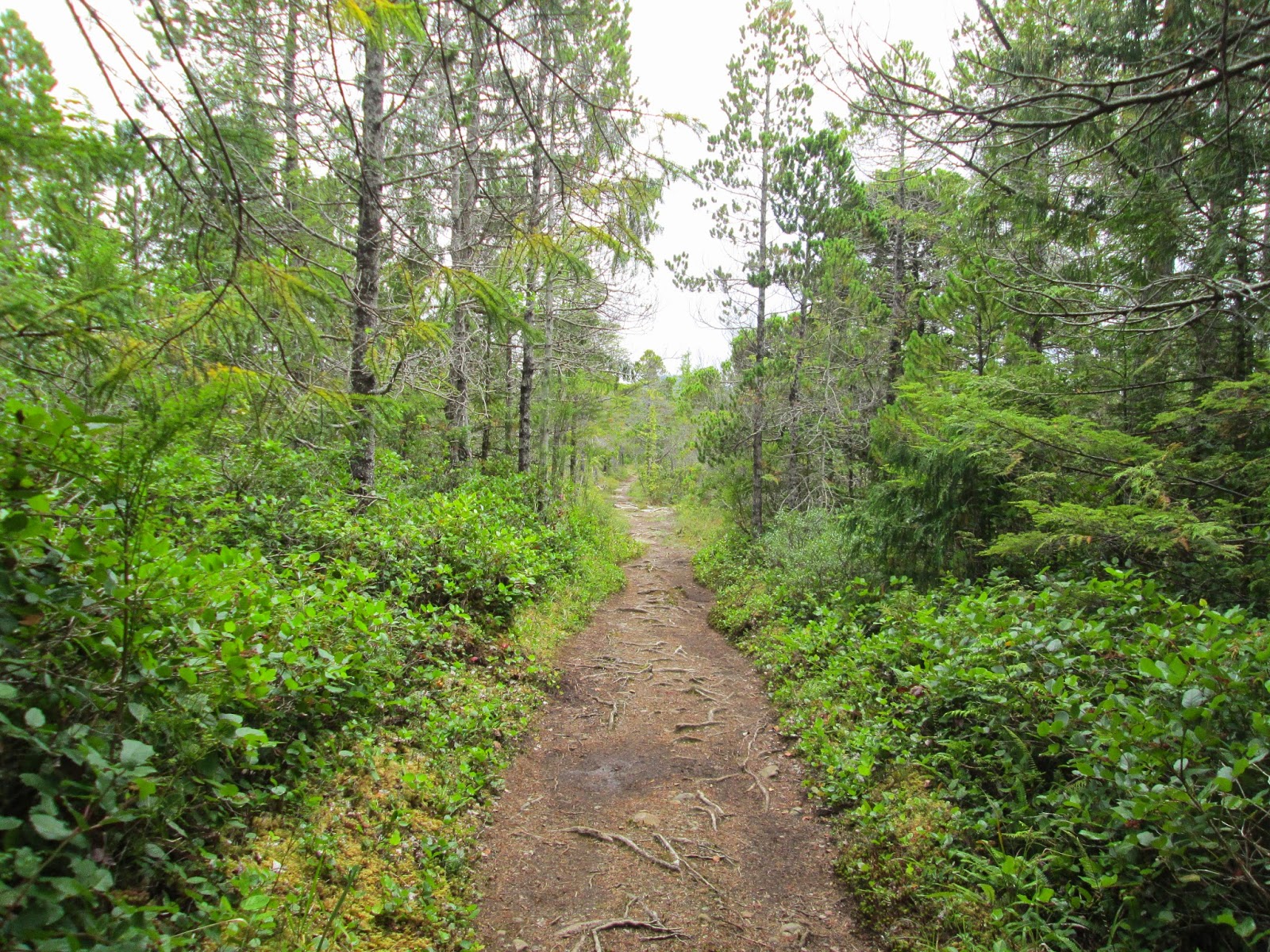 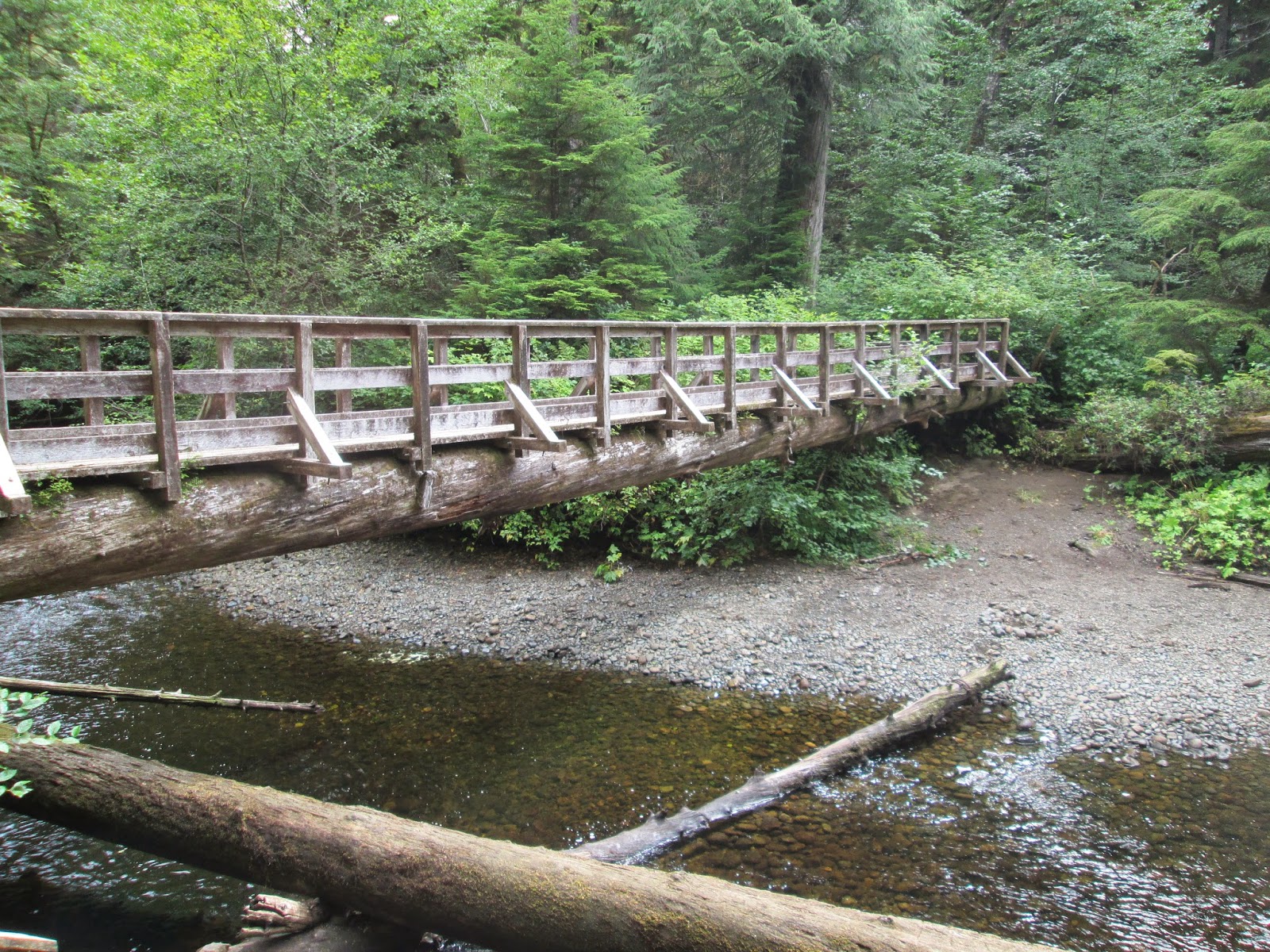 I got to Eric Lake at a convenient break in the rain, so I was able to quickly set up my tent and have dinner before it started raining again.

The Eric Lake camp sit was pretty well developed.  There were quite a few tent pads, and the whole area was linked with boardwalks.

I hadn't been able to properly stake out my tent on a tent pad to this point, so I decided to get creative.  On the front and back of my tent there were lines that I could tie, but the sides presented more of an issue with only a little elastic loop to work with.  I didn't want to break out my paracord to tie these, so I put the straps on the handles my hiking poles through these and then stuck my hiking poles in the ground.  I thought it was the closest I would ever come to being MacGyver. 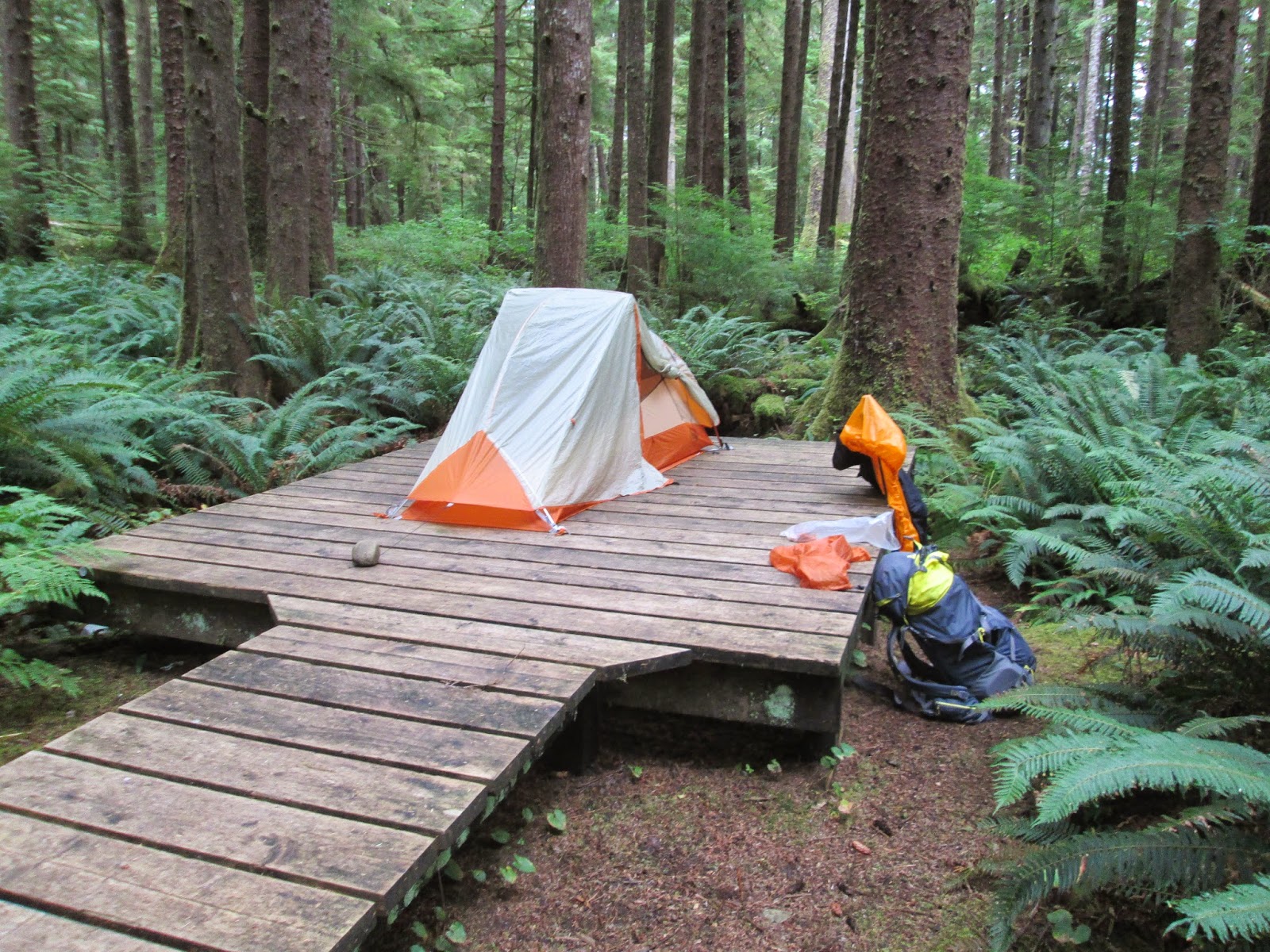 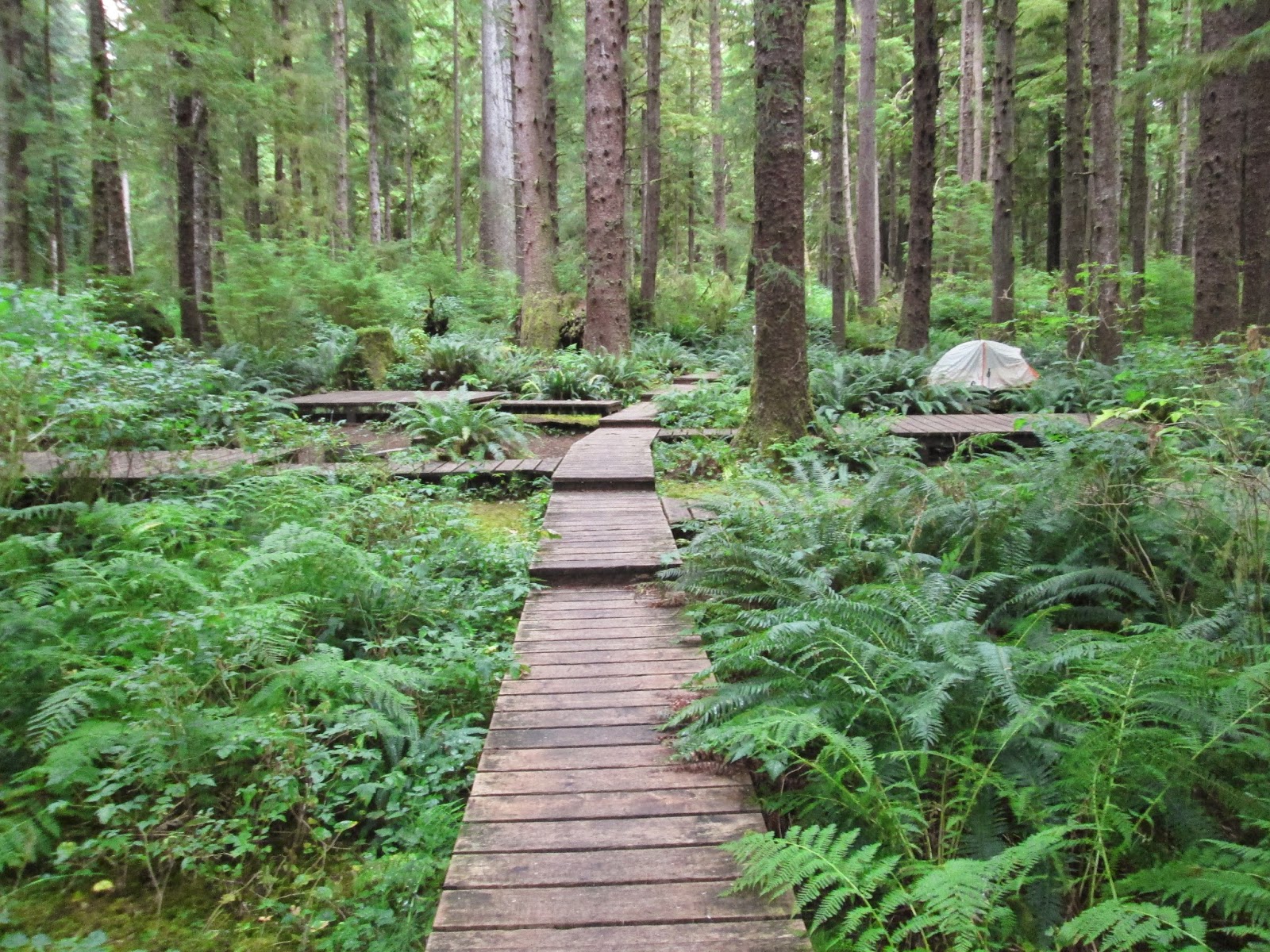