This year, I gave into my extremely masochistic nature and decided to hike the North Coast Trail (NCT) and the Juan de Fuca Marine Trail on Vancouver Island back to back.  I've always kind of viewed the West Coast Trail, Juan de Fuca Trail, and NCT as forming Vancouver Island's version of the Triple Crown, so the completionist in me wanted to have all 3 hikes in the bag (of course I know those make up just a small chunk of the great hiking on the island).

The NCT is a 43.1 km extension of the Cape Scott Trail on the northern end of Vancouver Island.  The trail opened in 2008, so it is still a relatively new trail.  With the 15 km Cape Scott Trail factored in, my trip was going to be at least 58.1 km (barring something horrific like being mauled by a bear or getting sore feet and needing to be helicoptered out).

The NCT has been described as what the West Coast Trail was like 30 years ago.  It's a remote experience that not many people take on, the terrain is rough and the trail more or less plows over or through anything it encounters, and in wet weather it is a guarantee that there will be lots of knee deep mud.  It is also a hot spot for wildlife.  Bears, cougars, and wolves live in the area, and there are signs of them everywhere.  While there aren't many people on the trail, by no means are you ever alone.

To get to the NCT I took the Greyhound to Port Hardy which was an exhausting experience.  Since taking the Greyhound from Princeton would have meant having to spend the night in Vancouver, I left from Hope at 2:00 AM to save a day.  As a result, I slept for the majority of the Greyhound ride.

I woke up in Port Hardy in more pain than I ended up being in from the hike (Greyhounds are not built for sleeping).  It was overcast and looked on the verge of raining which was a bit worrisome to me.  As I exited my bus I heard someone mention that power was out in Port Hardy, so no restaurants were open.  I figured I could scrounge up some extra food from my supply for the hike, so I wasn't too worried about this.  I made my way to the North Coast Trail Backpackers Hostel and checked into my room.  I didn't have particularly high expectations for the hostel and picked it just because of how low the rates were, but I was pleasantly surprised.  It was definitely clean, had a pretty well set up common room, and the folks running it were extremely friendly and accommodating.

I found an extra Mars bar in my pack, so that constituted my dinner for the evening.  I fell asleep pretty early, probably around 7:00 or 8:00.  Since the power was out in the town, I didn't feel like it was worth walking around and exploring, and Port Hardy seemed like one of those places where everything is closed by 8:00.  I thought I could tour the town when I finished the trail.

I woke up the next morning and got ready to leave for the trail.  The North Coast Trail Shuttle brought a shuttle to the hostel to pick up all of the hikers who were leaving for Shushartie Bay and brought us to their office.  Once we had settled up our bills, we got loaded onto the water taxi and departed for the trail.


There ended up being a pretty thick fog for the trip to Shushartie, so it wasn't as scenic as it normally would have been, but I knew this trip was going to give me my fill of ocean scenery.

One of the funny little quirks of the NCT is that there is no dock at Shushartie Bay.  I got dropped off on some rocks and got to start my hike with a scramble up to the trail head.  I can see that this section could be dangerous since it is pretty slippery, but I hope they don't build a proper dock in the future.  This is a pretty unique experience that immediately kicks you into the mentality that you are in an unforgiving chunk of remote wilderness and you won't have a lot of help.

I should mention that I was pretty satisfied with the shuttle service as well.  The departure and arrival times were pretty much right on the button, and everyone I met with the service was very friendly, helpful, and knowledgeable of the area.  Also, the pick up from the hostel was a really nice extra service.  It let me sleep at least 30 minutes longer, which was definitely needed.

From Shushartie the trail immediately began a steep ascent.  Within minutes I was huffing and puffing, wondering if I was in any kind of shape to be taking on this kind of trail.  I had done quite a bit of hiking in June and July, but it had been two or three weeks since I had done anything really active, so my conditioning had gone down.  On the other hand, I was looking on the bright side that I was getting to hike the supposed hardest section of the NCT after a mostly dry summer.  A few people told me that this was the nicest condition I would ever see this part of the trail in.

It quickly became apparent what kind of trail this was going to be.  I was climbing over tree roots and fallen trees, ascending steep banks with just the assistance of a rope, fighting through sections that were extremely muddy despite the dry year, and squeezing through tight spaces.  It was very reminiscent of the inland section on the West Coast Trail from Camper Bay to Thrasher Cove. 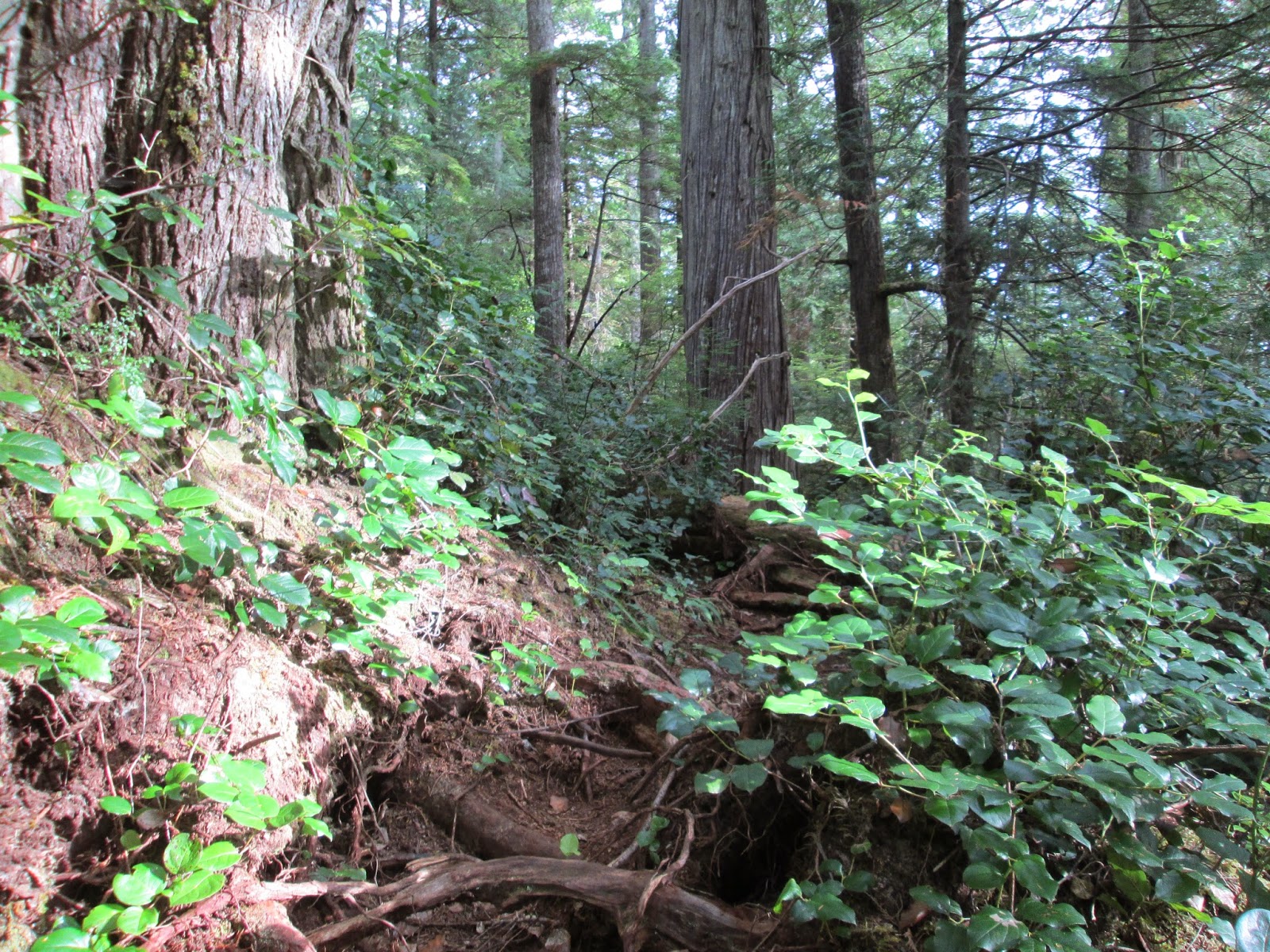 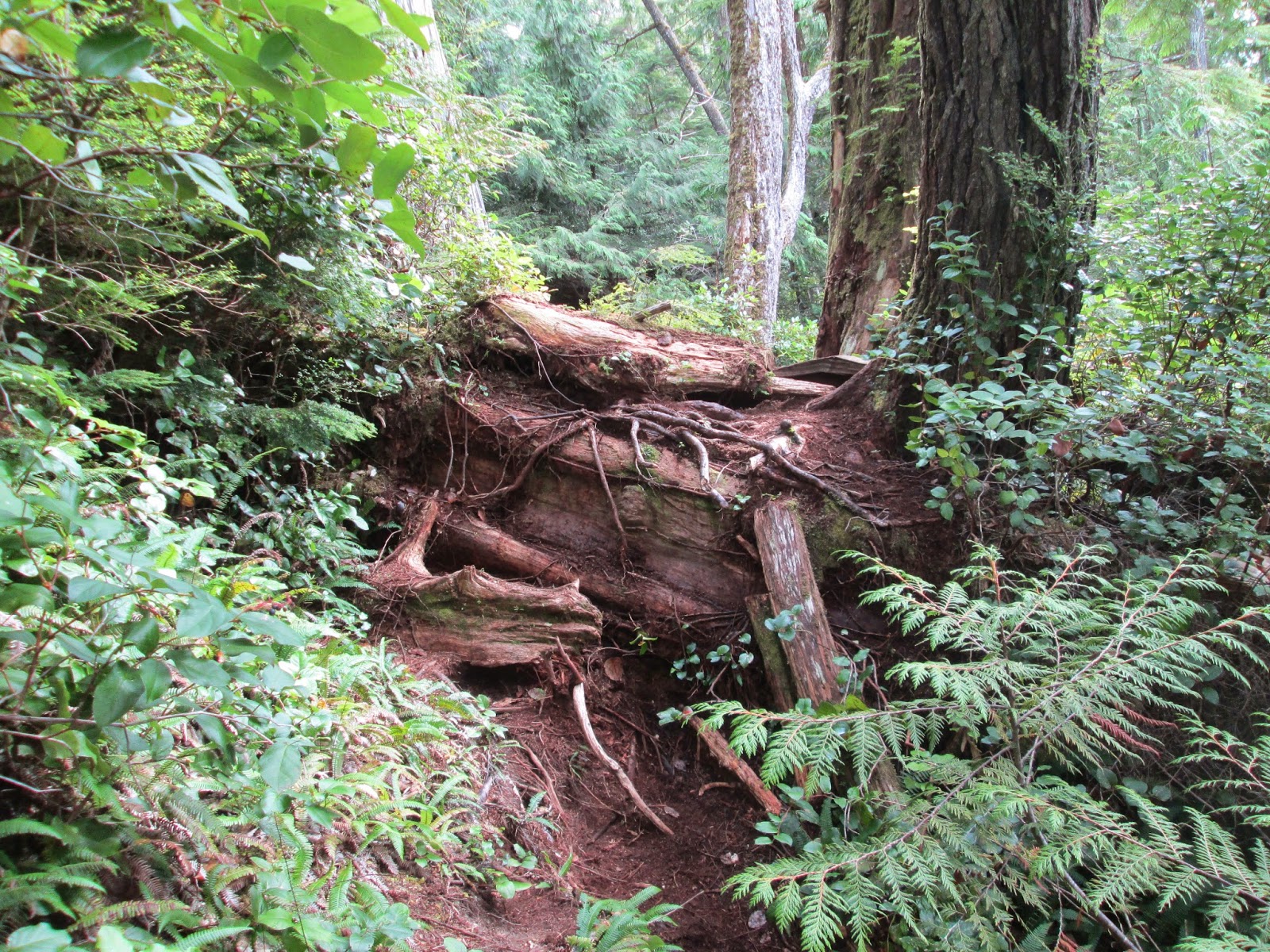 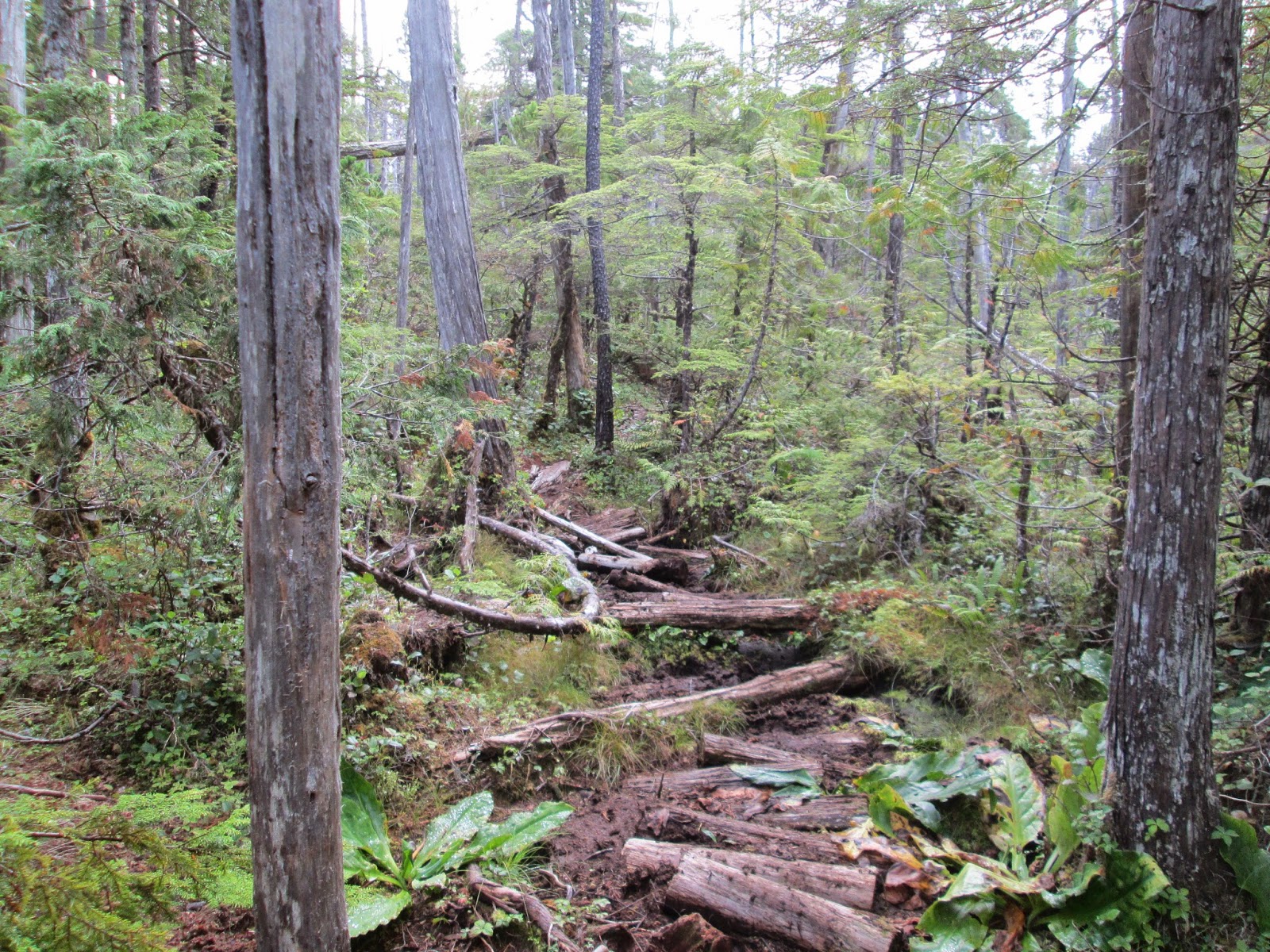 The trail worked its way to an estuary.  This area was covered by a number of boardwalks.  I'm assuming the boardwalks were more to protect a delicate area than to provide assistance to tired hikers.  It's probably because the trail is still fairly new, but I found the boardwalks to be in exponentially better shape than the West Coast Trail boardwalks.  They were still quite slippery, but I didn't find much in the name of broken pieces on them. 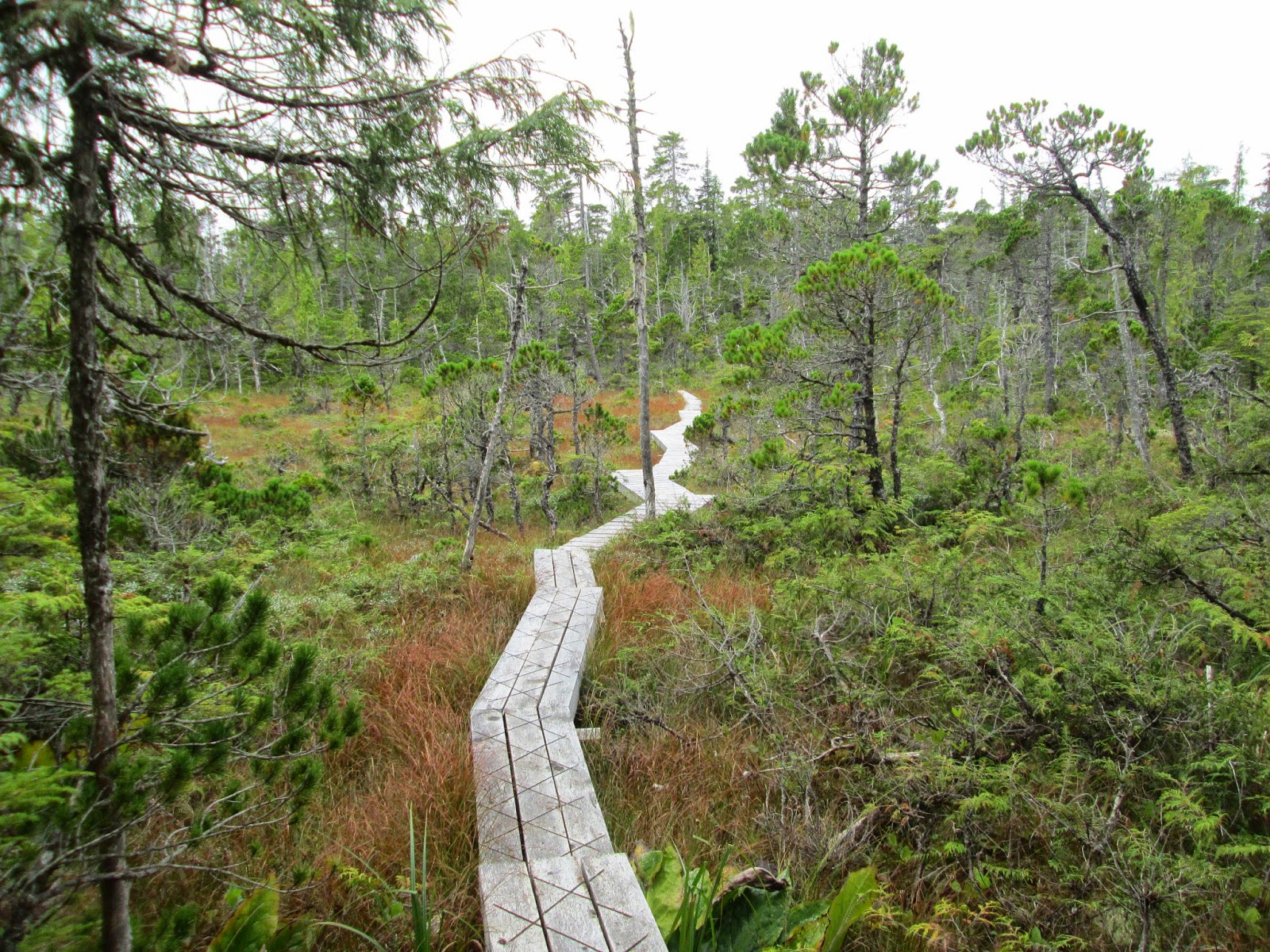 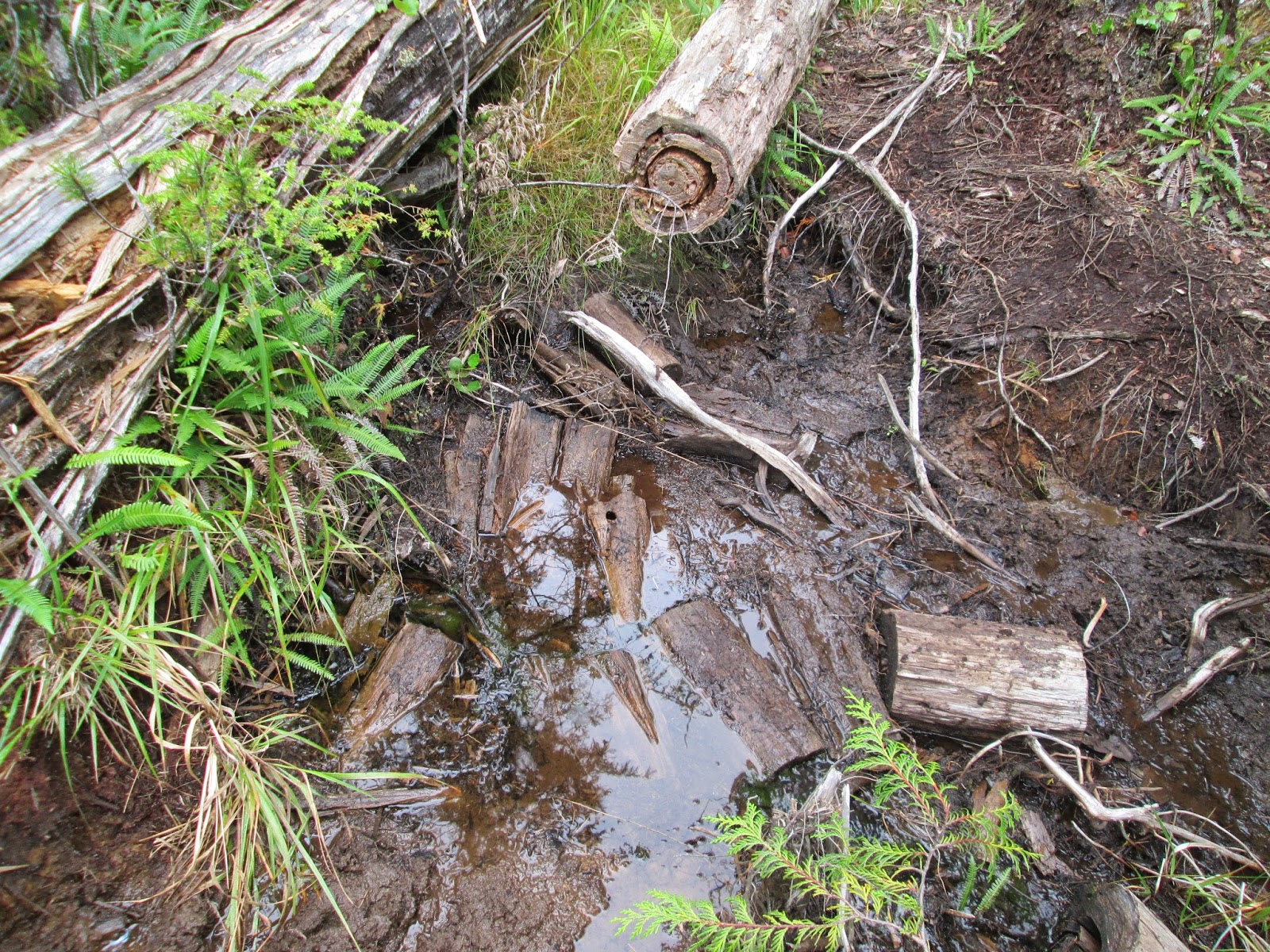 I continued on, trying to mentally track how far I thought I'd hiked.  At one point I was positive I had hiked at least 3 km.  An hour or so later I was sure that number was up to 5.  After what felt like an eternity, but was actually about 3 hours or so, I was positive Skinner Creek was just around the corner and I would be done the hardest part of the trail.  You can imagine my heartbreak when I saw this sign:

I stopped to mope for a bit before continuing on.  I kept slogging through mud and fighting the fallen trees and tree stumps that littered the area, constantly thinking I was almost there.  I got into a bit of a relaxed daze eventually, though this was abruptly broken by a snake scurrying across the trail.  Snakes freak me out.  If Indiana Jones can be scared of snakes then I won't be ashamed of it. 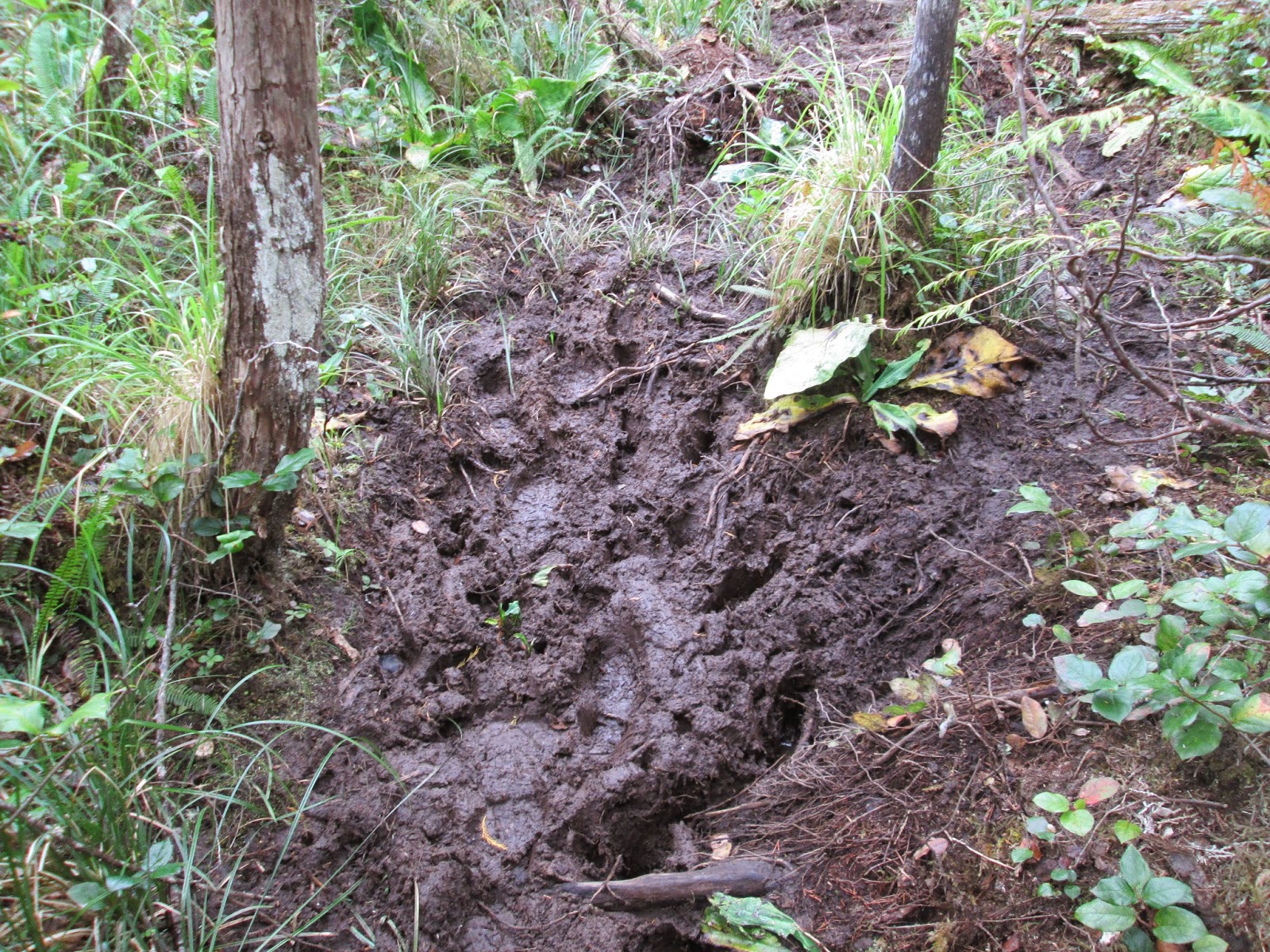 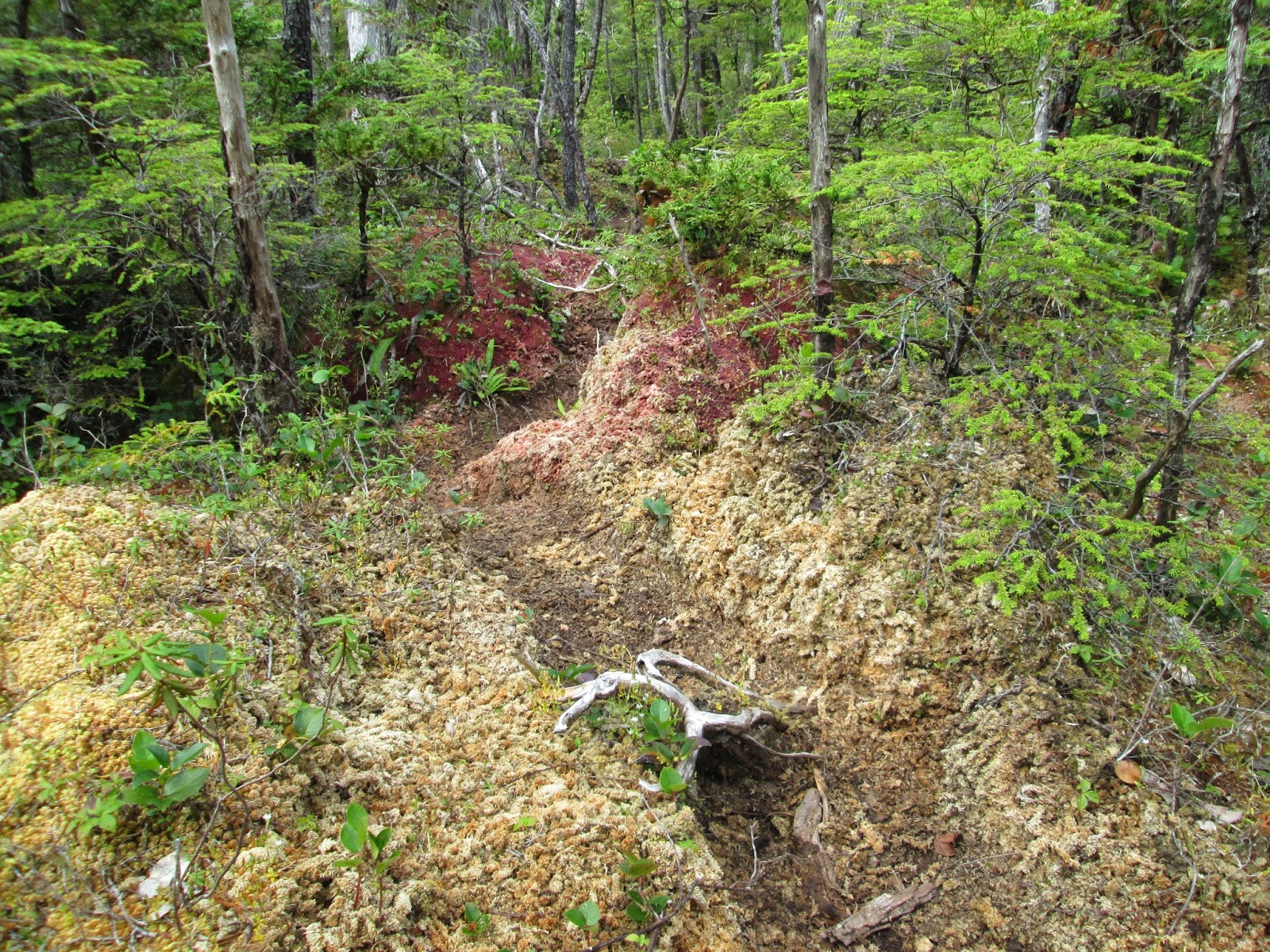 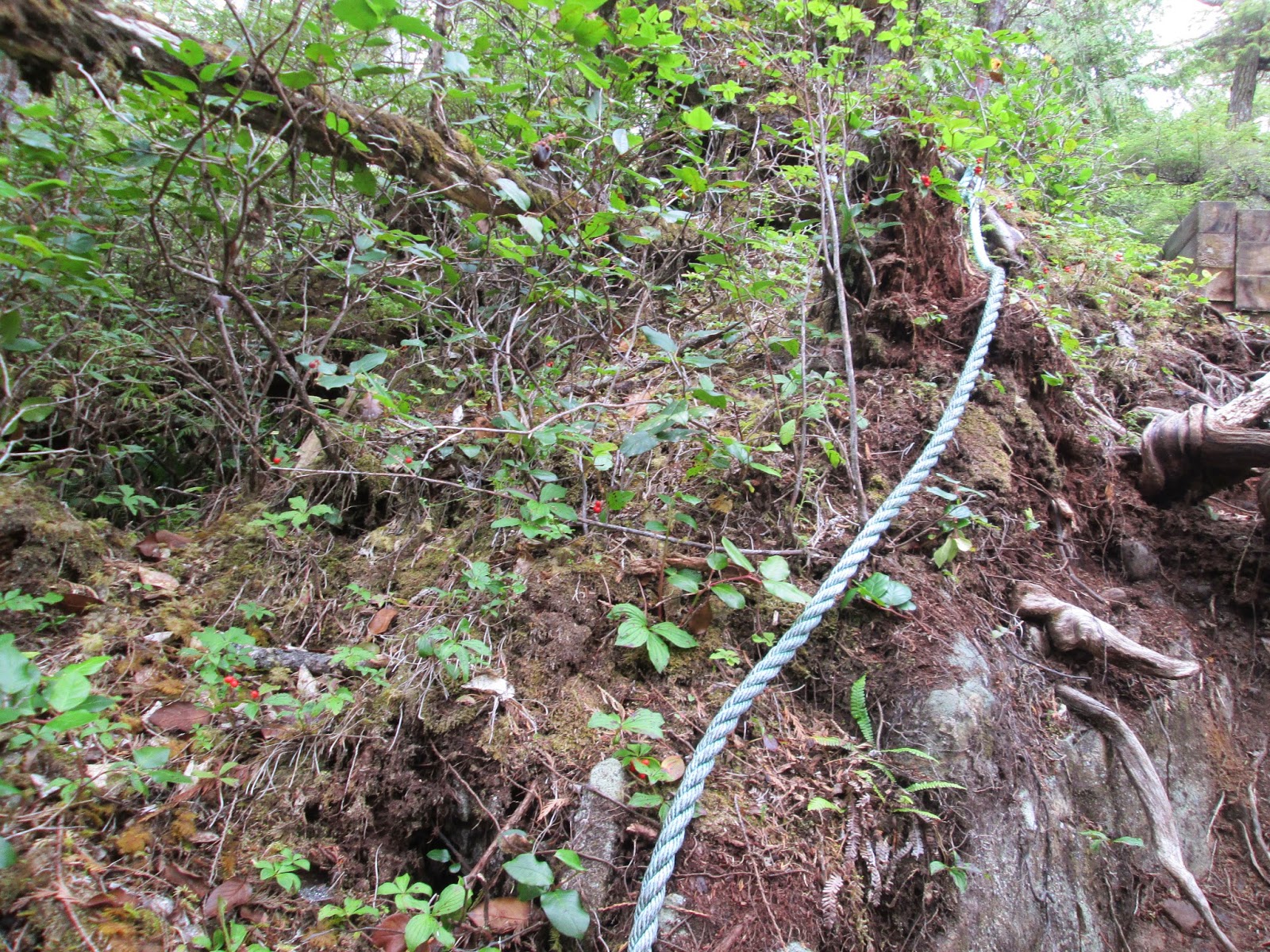 After another hour or so it began to lightly rain.  This is kind of what I was worried about, as I knew this light rain could turn into a monsoon if it felt like it.  Luckily the rain stayed light enough that I never had to put my pack cover on, but the thought that it might start pouring stayed at the back of my mind. 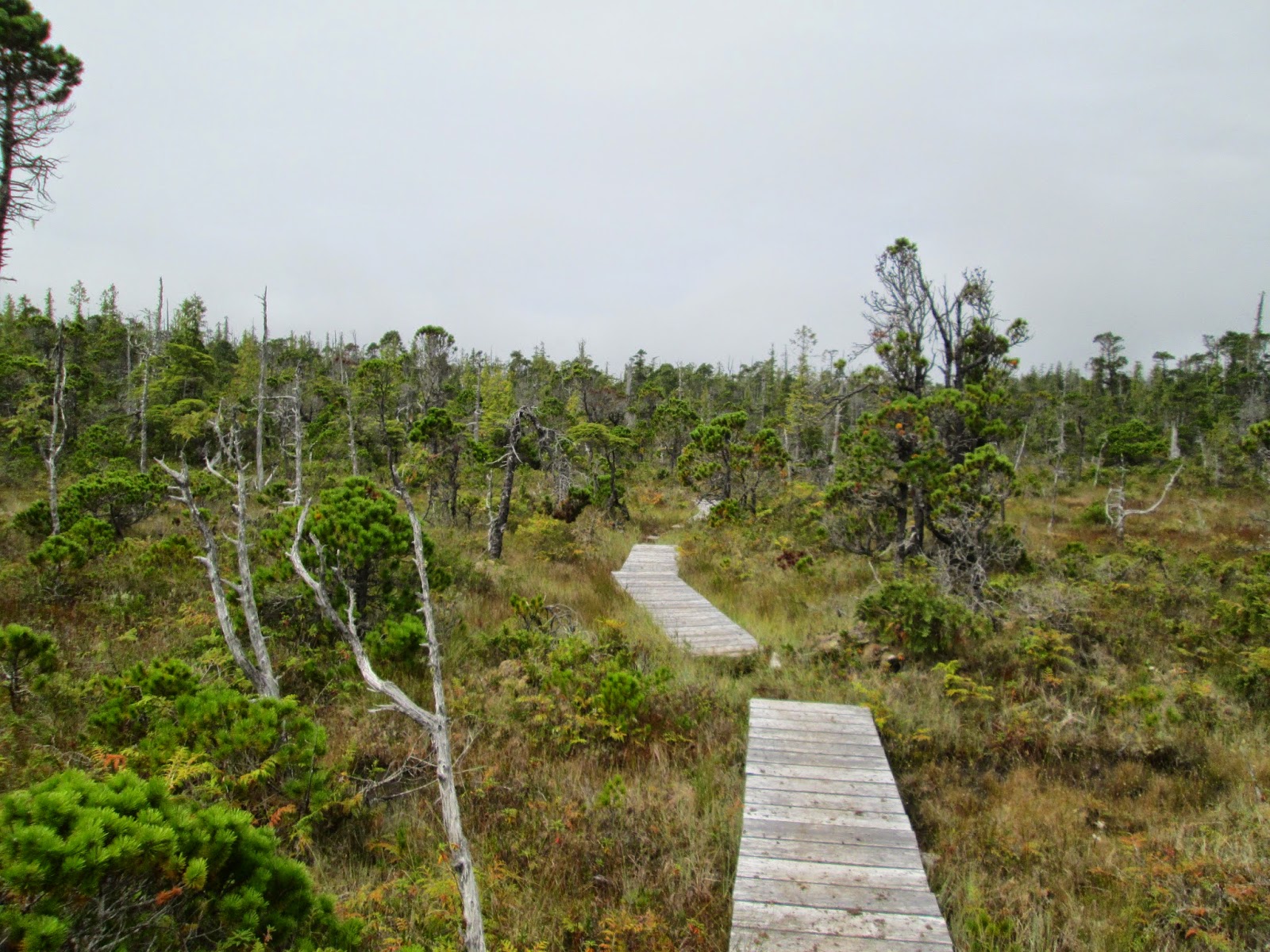 Eventually, after one of the tougher hikes I've done, I reached Skinner Creek.  I crossed the creek and climbed over the logjam at the end of it.  Since the tide was too high to hike on the beach and I wanted to press on, my plan was to hike the inland trail to the Nahwitti River.  However, according to my map, the inland trail should have branched off before I crossed the creek and got to the beach.  I hiked back and tried to find it, but there was no sign of another trail.  I returned to the creek, crossed it again and decided to try my luck on the beach.  I thought maybe the tide would have dropped enough to make it.

I made it a ways up the beach before getting cut off by the tide and having to turn around.   Horribly frustrated, I was considering just camping at Skinner Creek, but I really had wanted to make it to the Nahwitti River campsite.  It would shave 3 km of my hike the next day, and I knew those would be 3 very difficult km.

Feeling nature calling, I used the outhouse at the campsite (which, in addition to being extremely clean, was stocked with toilet paper).  As I exited, I noticed a trail going past the outhouse.  I investigated and found that it was the inland trail.  I cursed the accuracy of my map and started down the trail. 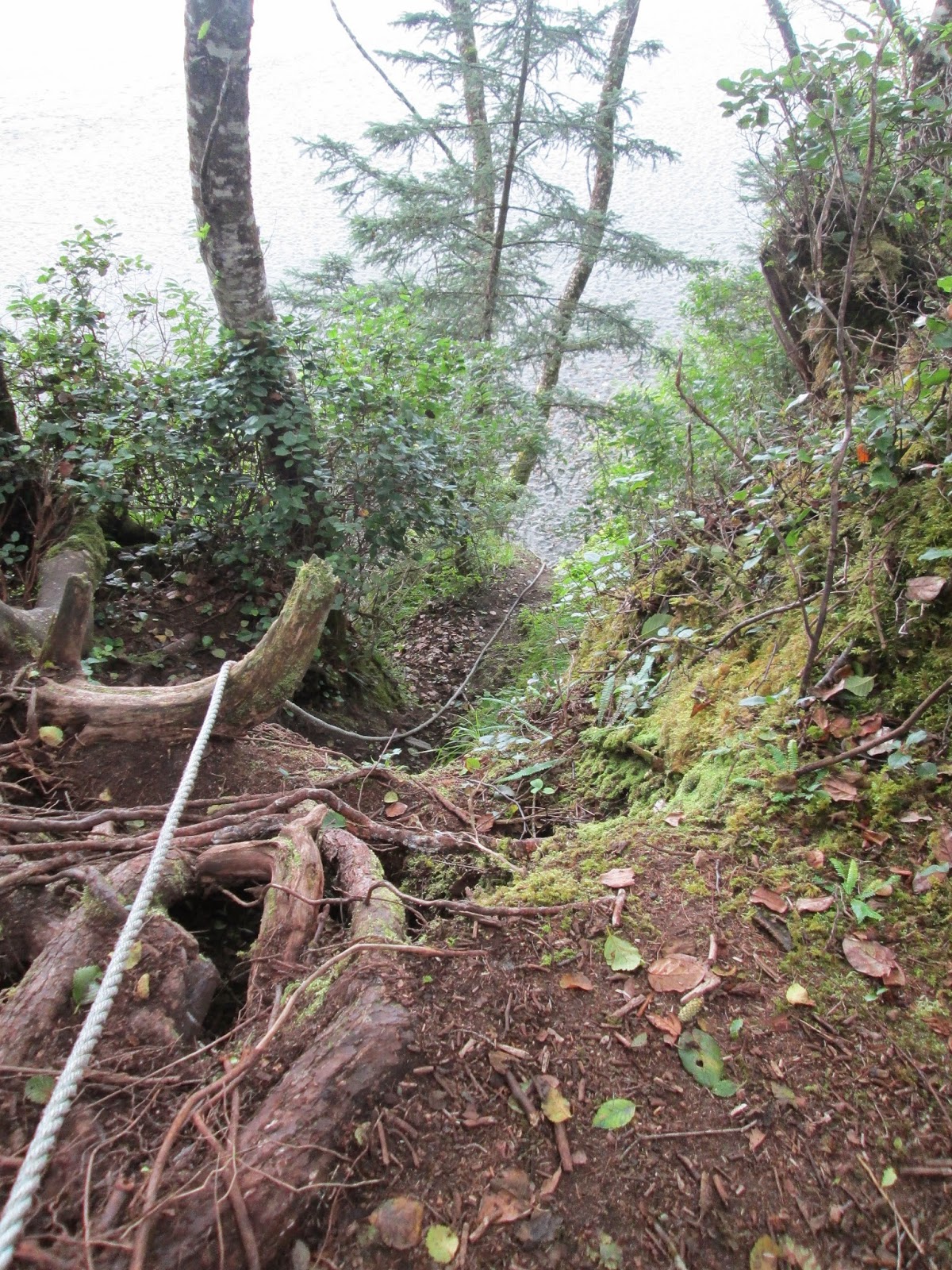 After more tough hiking I reached the Nawhitti River campsite.  I set up my tent on one of the nice tent pads, going against the idea of doing things the wild and untamed way.  I really hate camping on sand.  That stuff gets everywhere, and I'm not hiking with a vacuum cleaner.

By the time I was setting up my tent the light rain had stopped, so I managed to keep everything dry.  I had a quick supper (beef jerky and Uncle Ben's Bistro Express) and went to bed.  I had survived one of the hardest parts of the NCT.  I was finally beginning to think I could survive the rest. 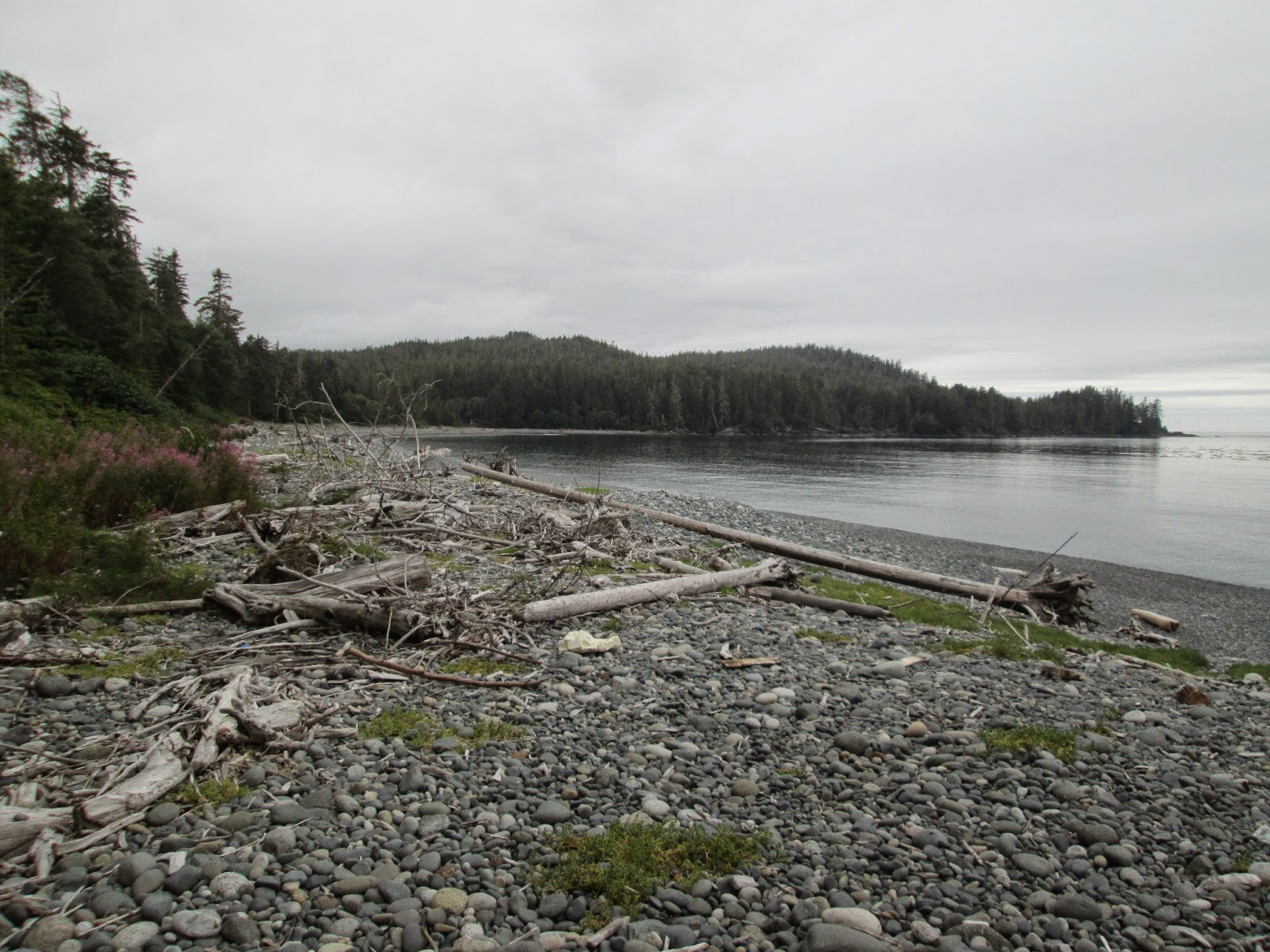 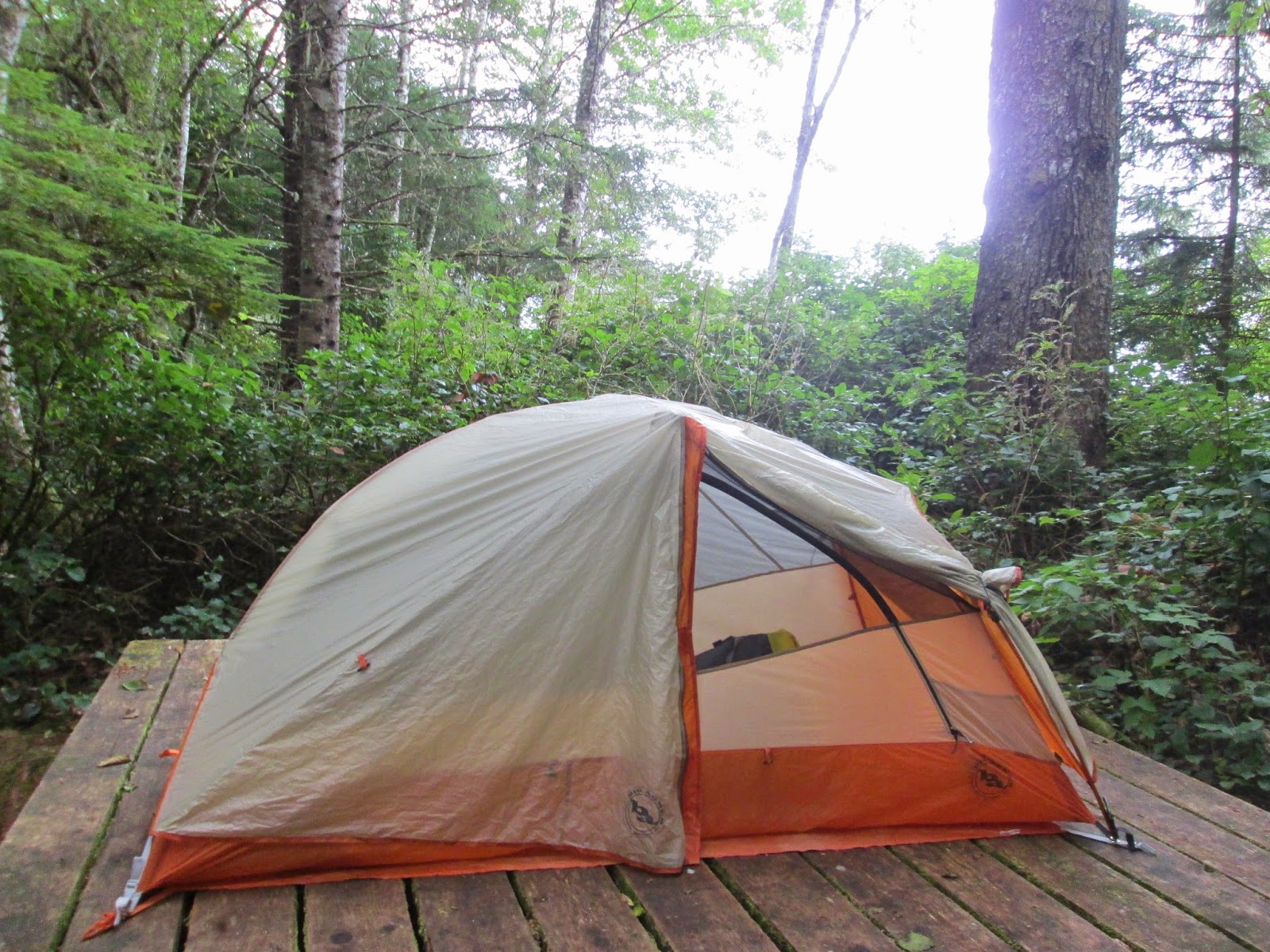