Me and my Dad decided to try hiking in the Coquihalla Summit Recreation Area a few days ago.  This area isn't particularly well advertised, so I didn't even know it existed until a few months ago.  The hike that had caught my attention was the hike up Needle Peak.  I didn't really know what to expect, but from the pictures I had seen, it looked like there were some very nice views from the summit.

As we were distracted and tired, we missed the exit we were supposed to take the first time.  We managed to find a spot to turn around a few minutes later, so it wasn't a big problem.  I did find it funny that, outside of a sign at the trail head (which was sort of out of the way) there were no signs at all to indicate that there was a hiking trail here.  Unless you knew the trail was here, you probably would not even notice it.

My primary concern was that the trail would be poorly marked or non-existent.  I was pleasantly surprised to see that the trail was as good as any of the trails in Manning or Cathedral Park.

The trail climbed up through the trees, with the occasional teasing view of Yak Peak.  It didn't take too long before the trees began to thin and we appeared to be on top of a ridge. 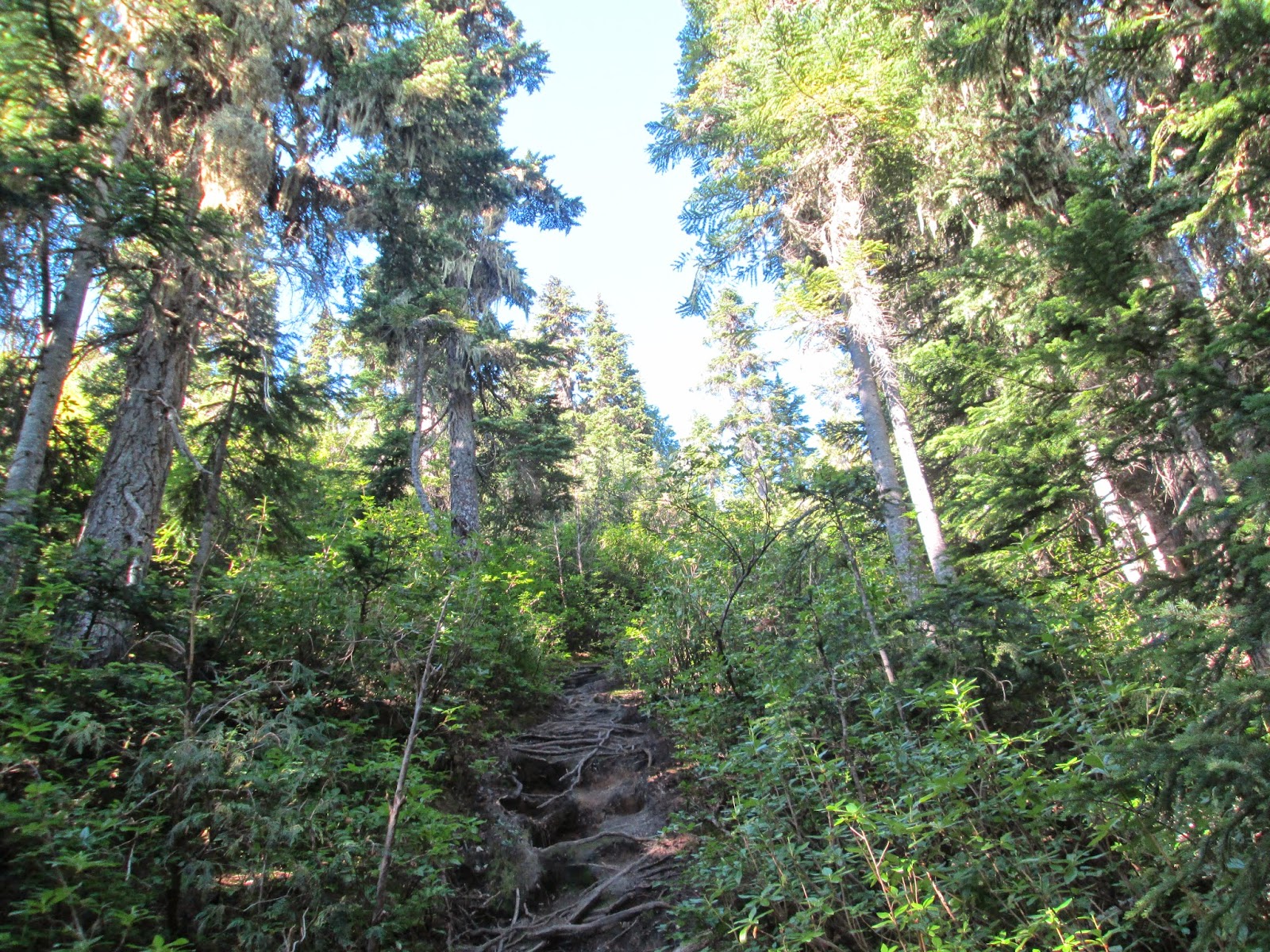 The trail got a bit rocky in places, but it wasn't any thing unmanageable.  After some more fairly moderate hiking on the ridge, we were given our first glimpse of Needle Peak.  I did half-wonder for the first time just how exactly we were going to climb the last bit of the summit. 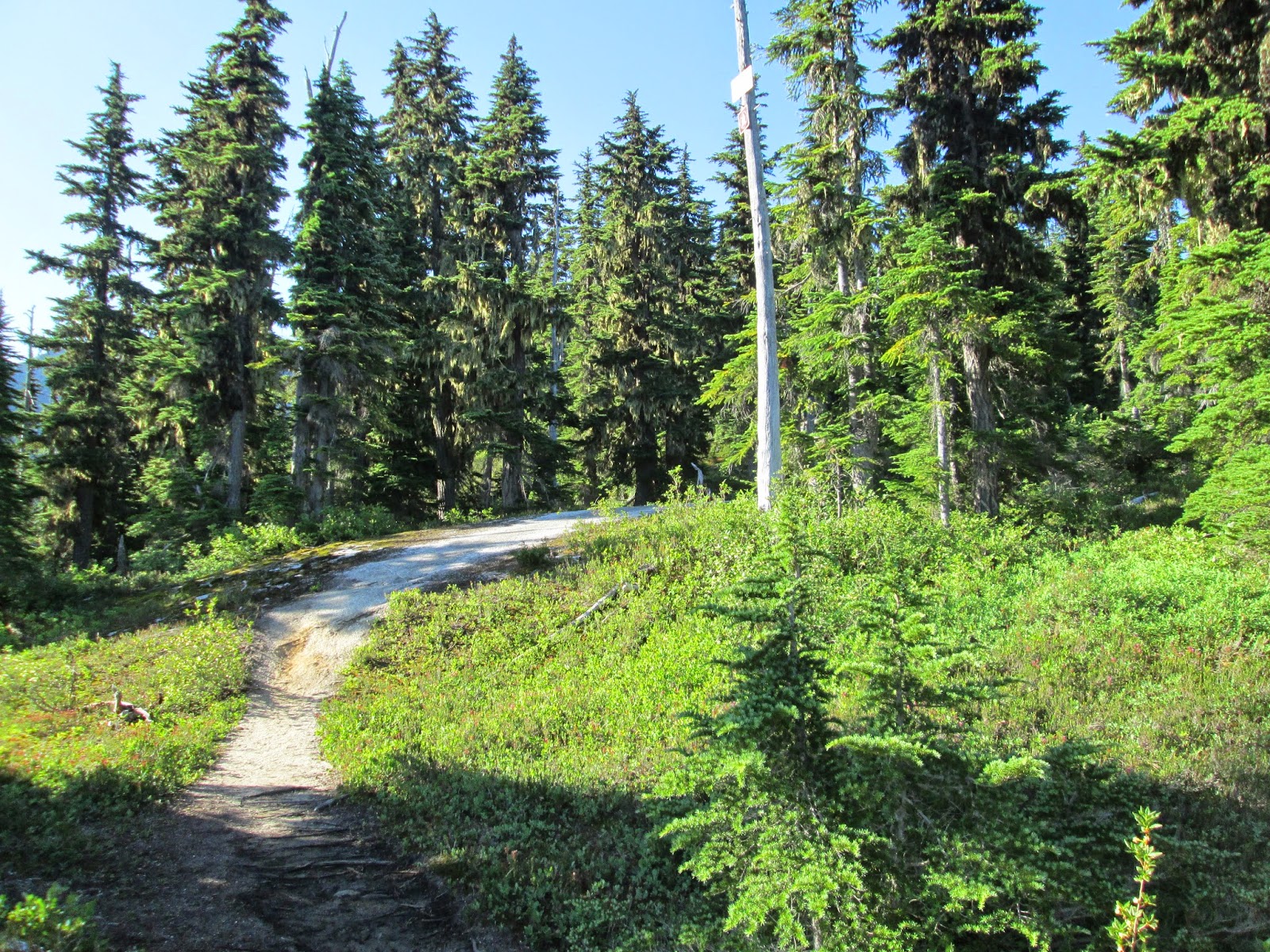 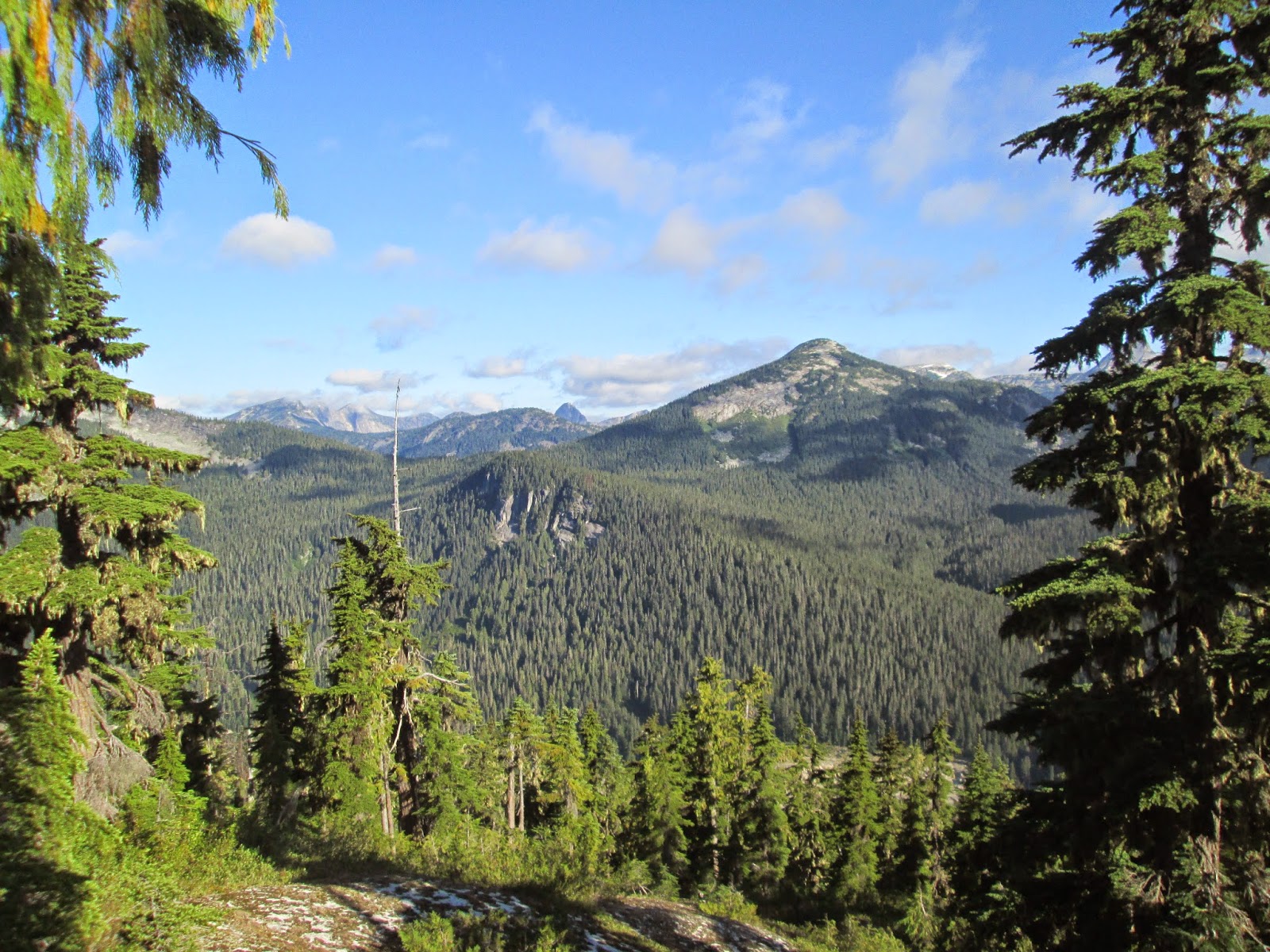 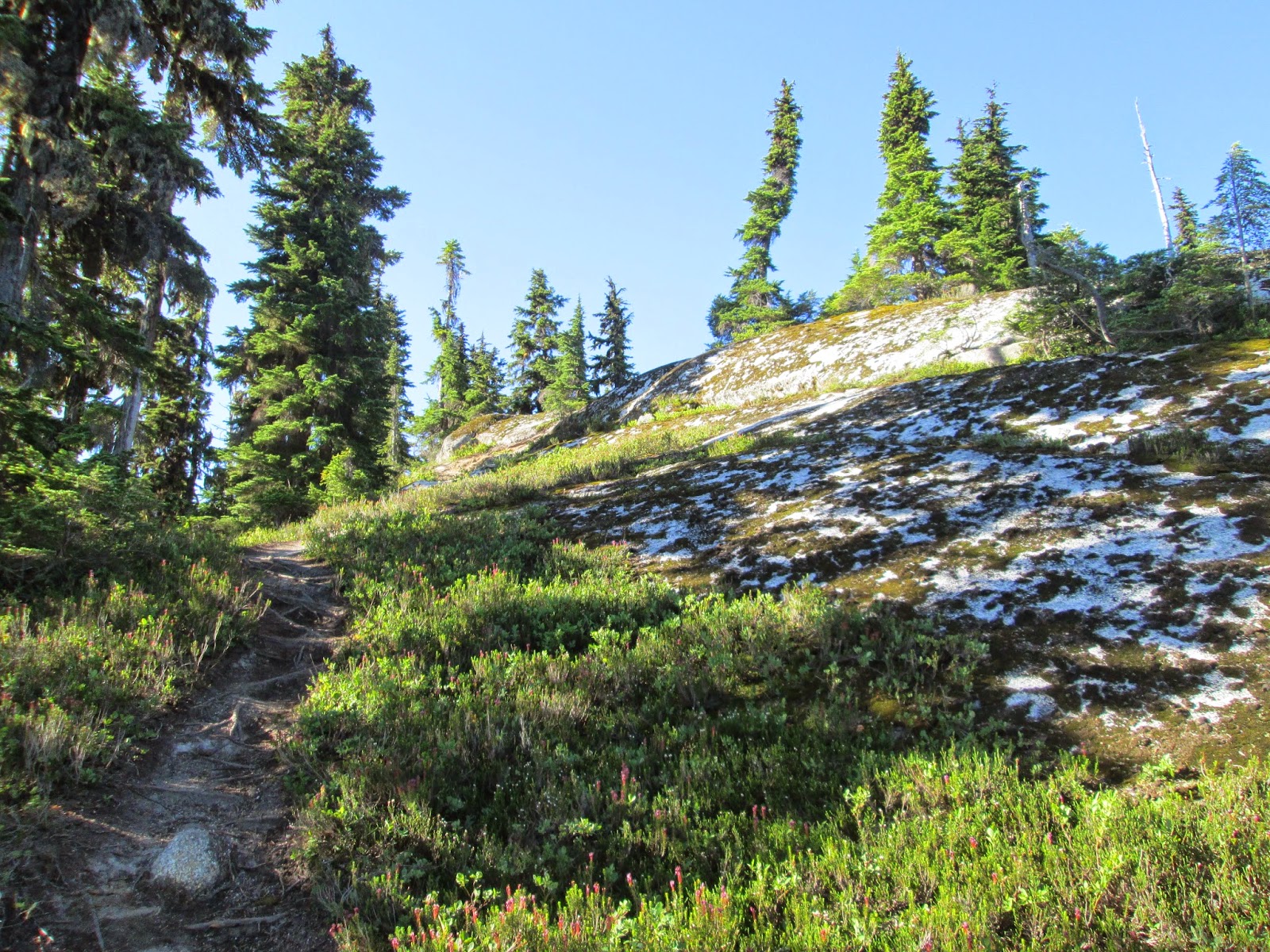 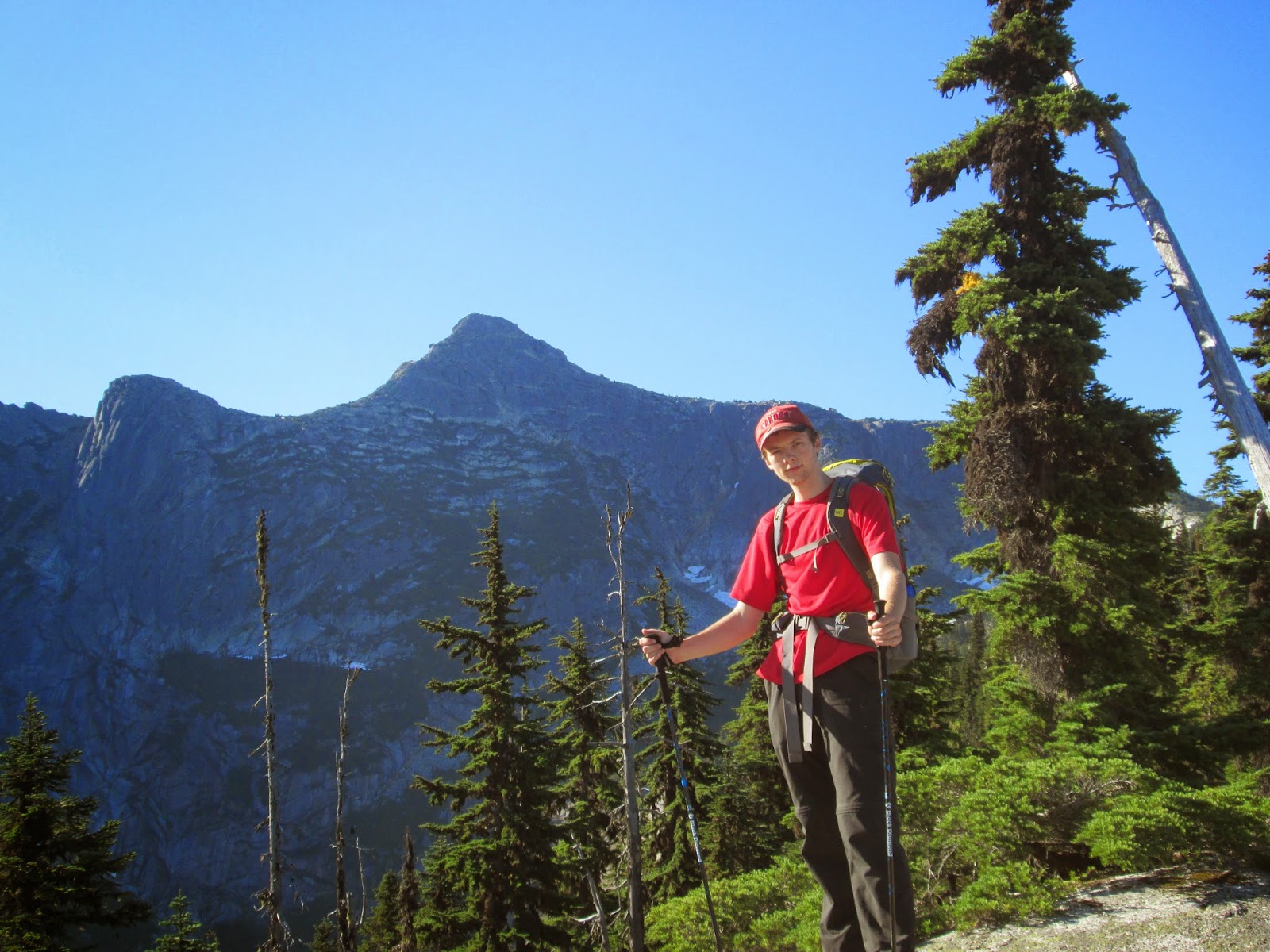 The trail continued to climb up the ridge, eventually climbing almost completely out of the trees, entering an area covered with granite.  The granite was coarse enough that it wasn't too difficult to walk over.

The trail began splitting at a number of points.  I had read that it never matters which direction you take, as the branches of the trail always meet up again.  From what I experienced, I would say that was fairly accurate.  We never had any issues figuring out where we were supposed to go. 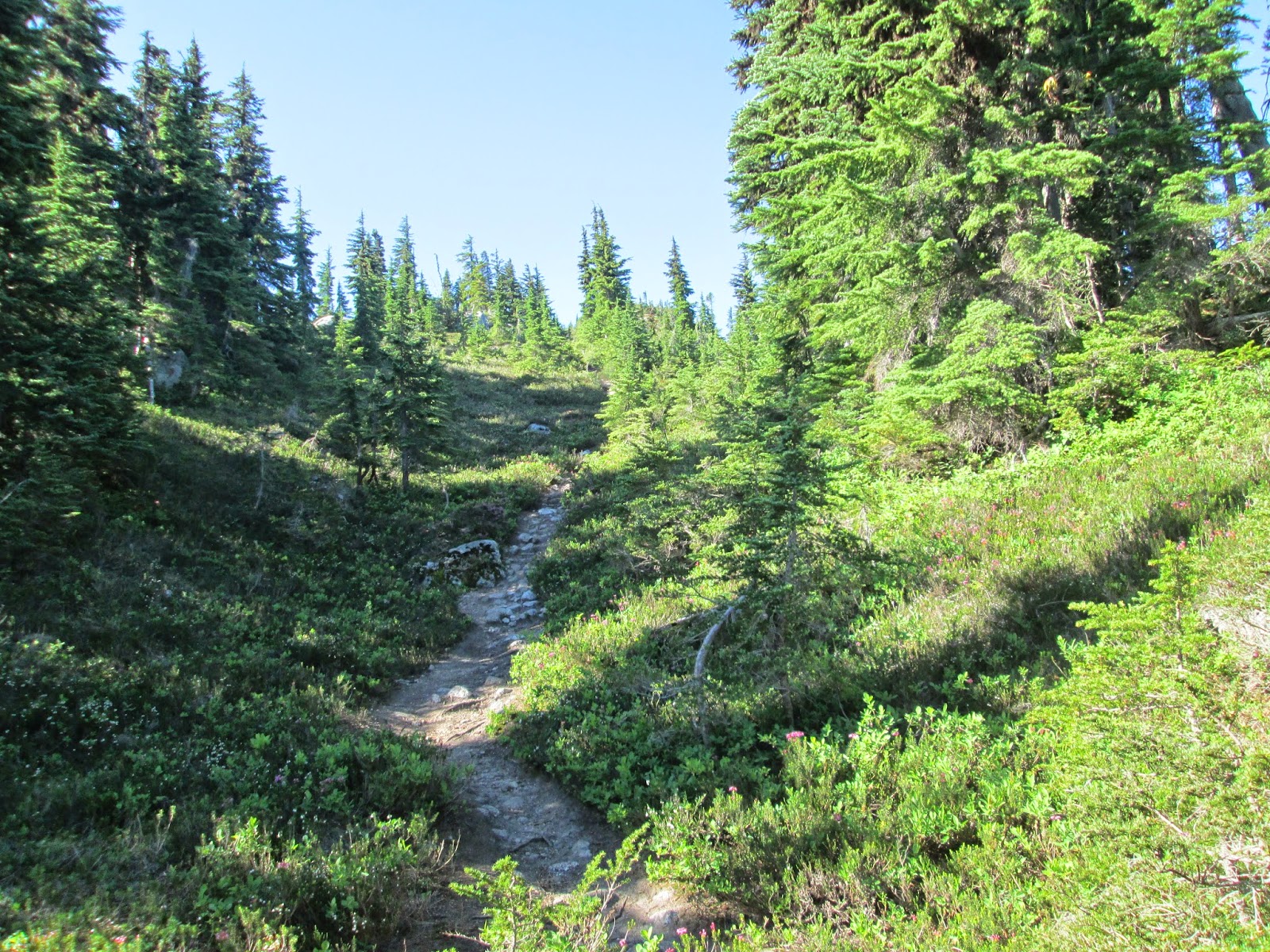 A little while later, we entered an open meadow area.  We could see our first good climb, and it didn't look as bad as I had anticipated.  Basically, the route from the meadow climbs up onto the ridge of Needle Peak, which leads to the final climb up the summit.  Both of these climbs are described as being easy Class 3, which means a climbing rope is not necessary, and falls are not always fatal.  I hadn't really branched out into this kind of thing, but this seemed to be a popular enough hike that I couldn't imagine it being too bad. 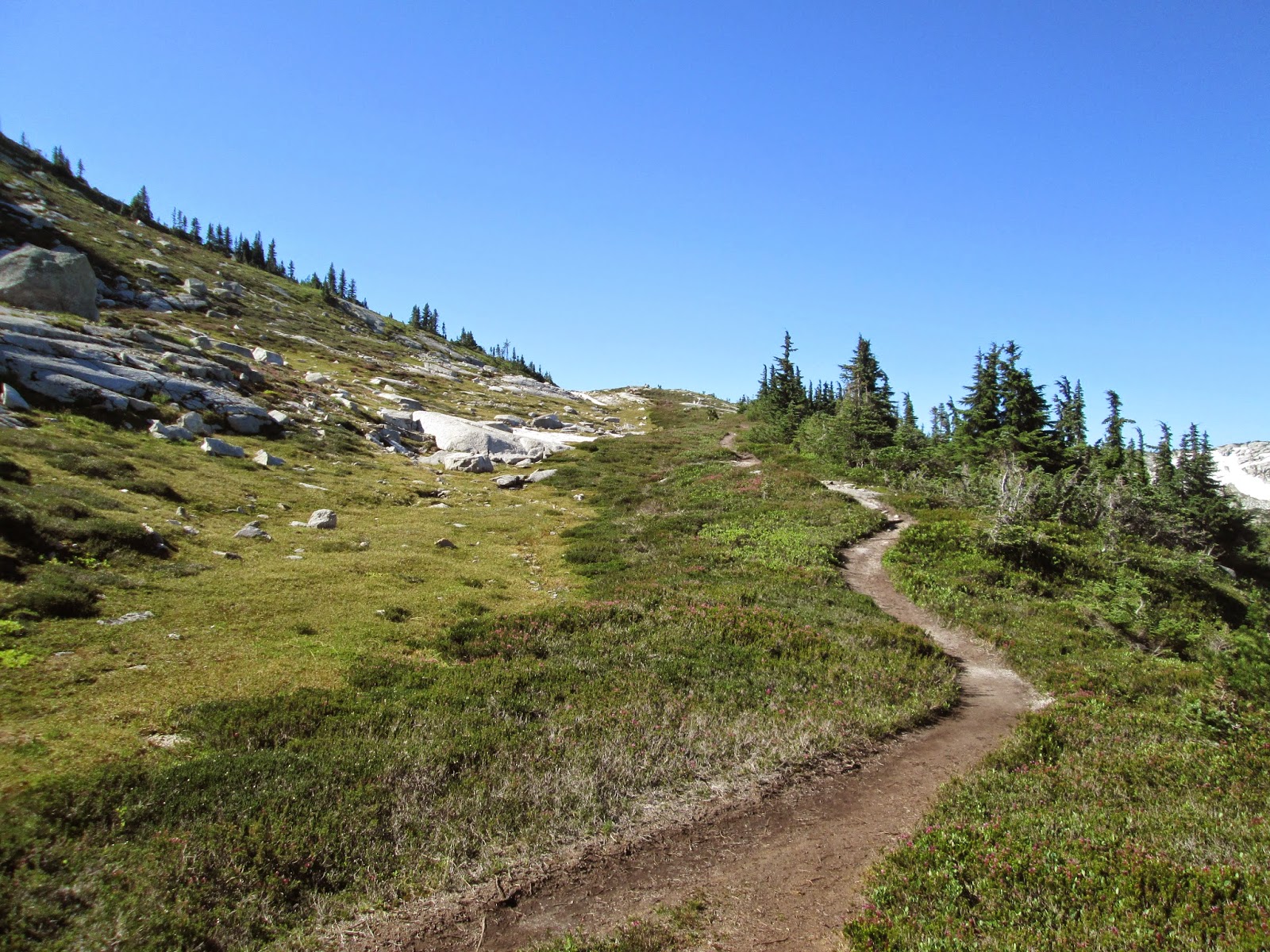 The first scramble was pretty easy.  There were a number of rock shelves that I climbed up and I didn't have any difficultly.  There was one spot that gave me a bit of trouble, since a rock overhang jutted out and my backpack got caught on it.  I eventually made it beyond this point, but not without getting the overwhelming feeling that I was about to fall. 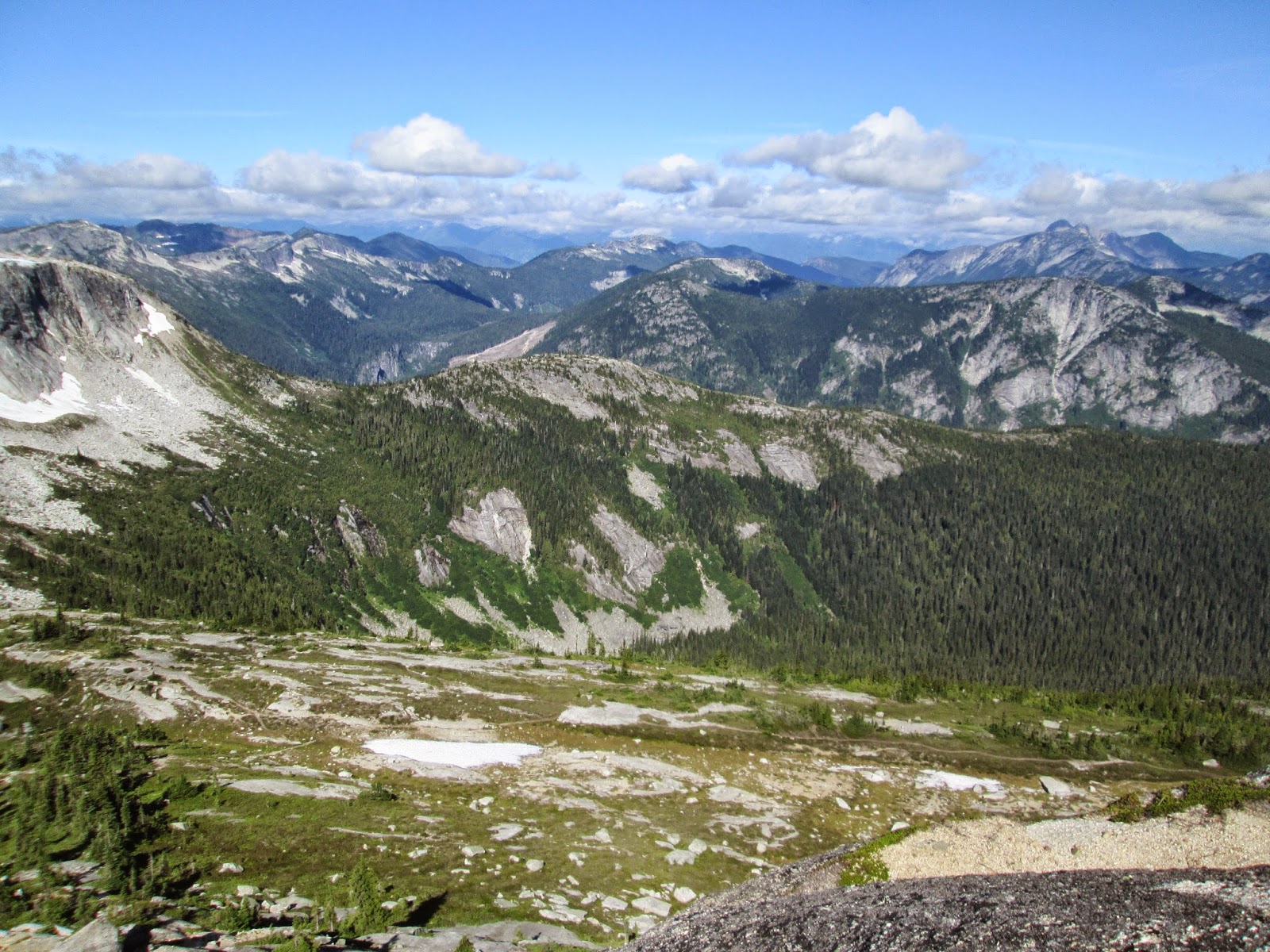 On top of the ridge, the pyramid shaped summit of Needle Peak loomed ahead.  I was a little intimidated, as I couldn't see a clear route up the summit.  I hoped very much that I hadn't picked a hike that was beyond my ability. 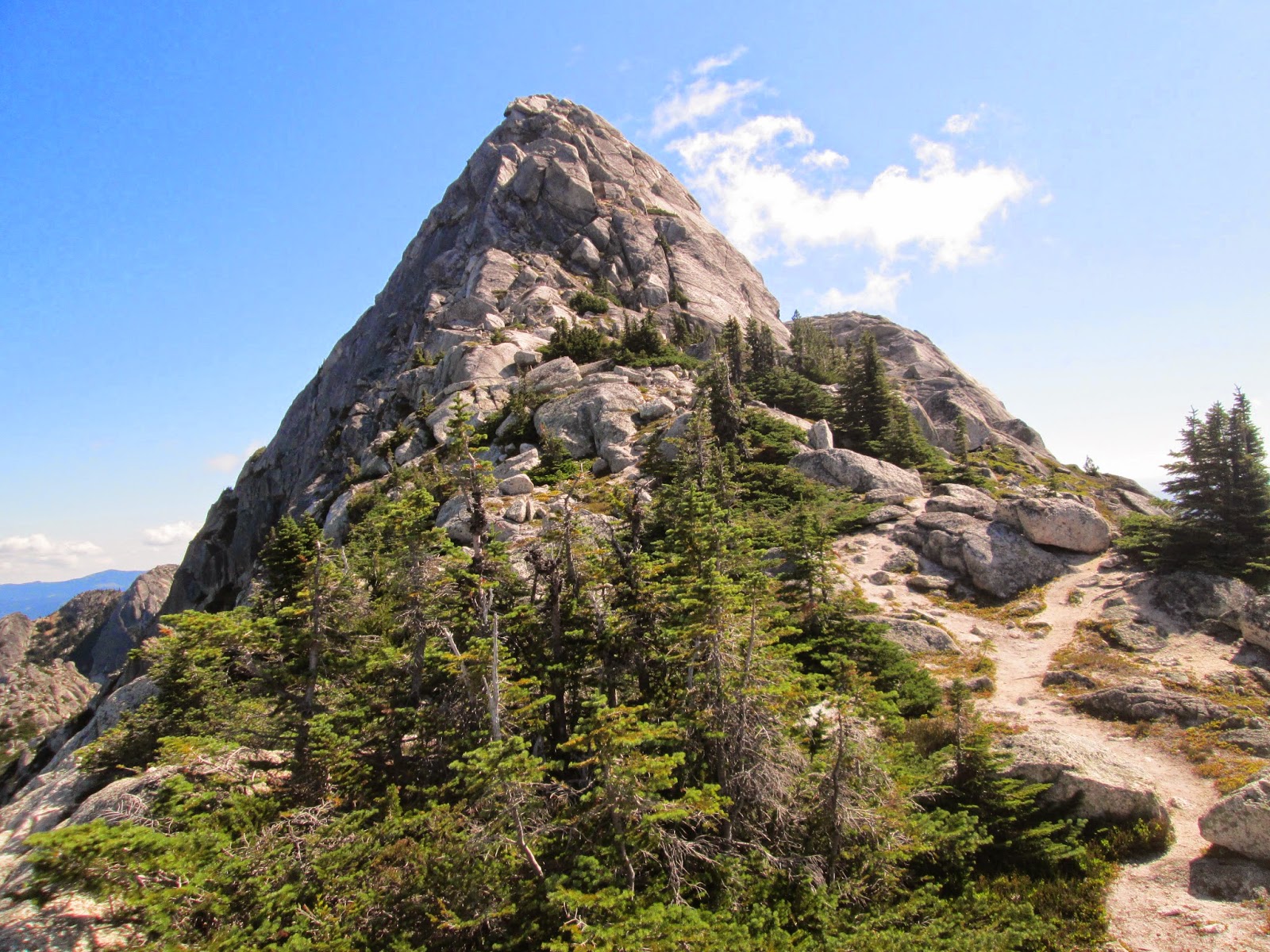 After a short break, we ditched our packs and began the final ascent.  At first, I thought the first scramble was actually going to be the hardest.  While there was a more intimidating drop off on this climb, there didn't seem to be very difficult footing anywhere, and I didn't end up needing to use my hands.

Then I got to this climb: 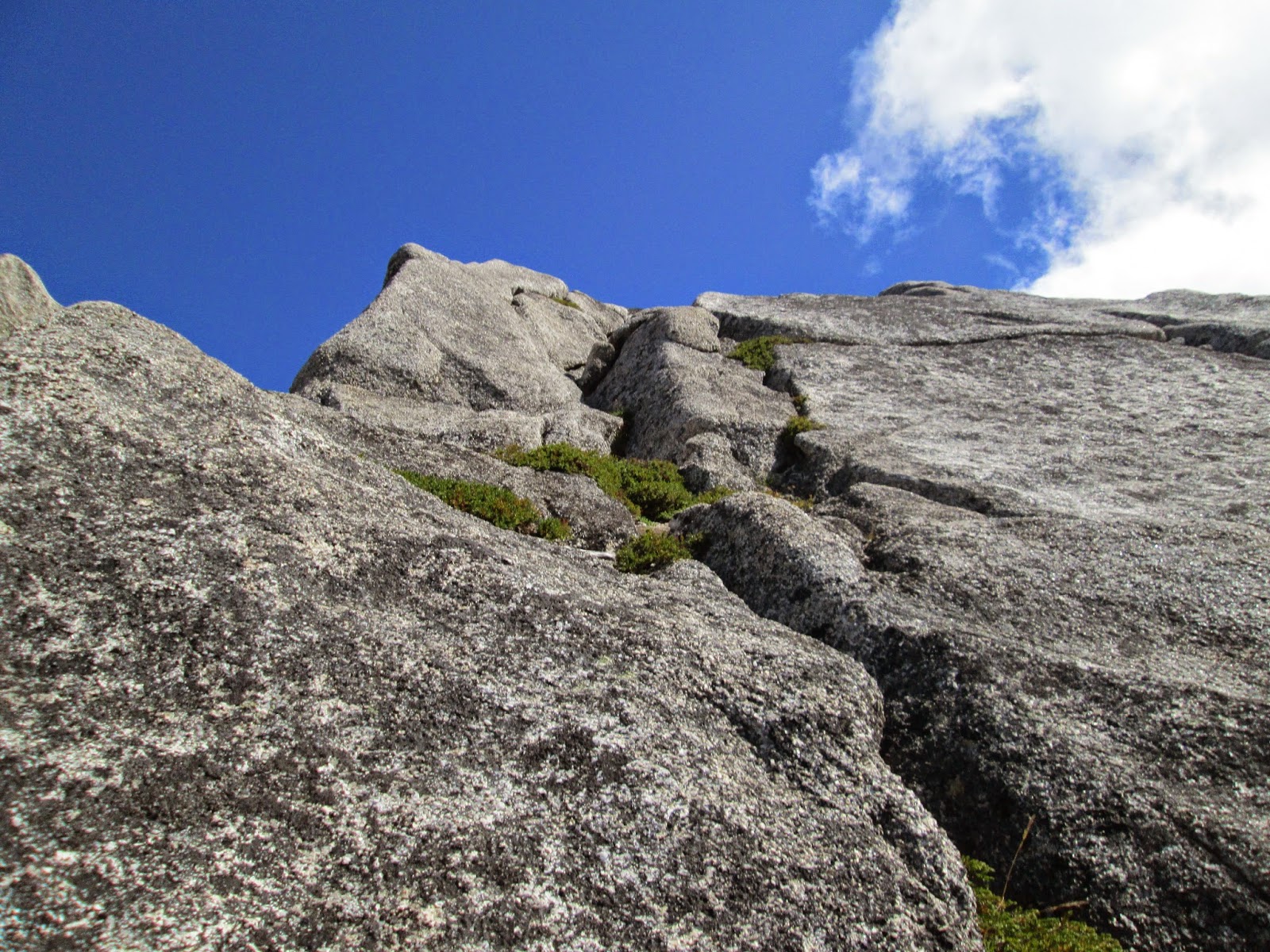 I came pretty close to chickening out at this point.  I was not too sure of the hand and foot holds, and the granite rock suddenly seemed a lot smoother than it had earlier.  I spent a bit of time debating whether or not climbing to the top was worth plunging to my tragic death.  My Dad encouraged me to not go if I didn't feel safe, but I eventually decided to try to make it.  I had come this far, I didn't want to quit now.  I found an easier route that cut out part of the climb, but I wasn't in the clear yet.  I got to another part that I couldn't figure out, so my Dad recommended that I go ahead so that he could give me a boost if I needed it.  Sure enough, as I began climbing, I started to feel myself sliding down.  I don't know what would have happened if my Dad wouldn't have been there, but luckily he was, and he was able to boost me to the top of the climb.  Being manlier than myself, he made it up the climb unassisted.

The rest of the climb was smooth sailing, though I was feeling pretty weak in the knees.  I'm not necessarily acrophobic, but I do have a healthy respect for heights, and this climb seemed perhaps a touch disrespectful.  There were nice views at the top, but I think I was too terrified to properly enjoy them.  I was still worried about the climb down. 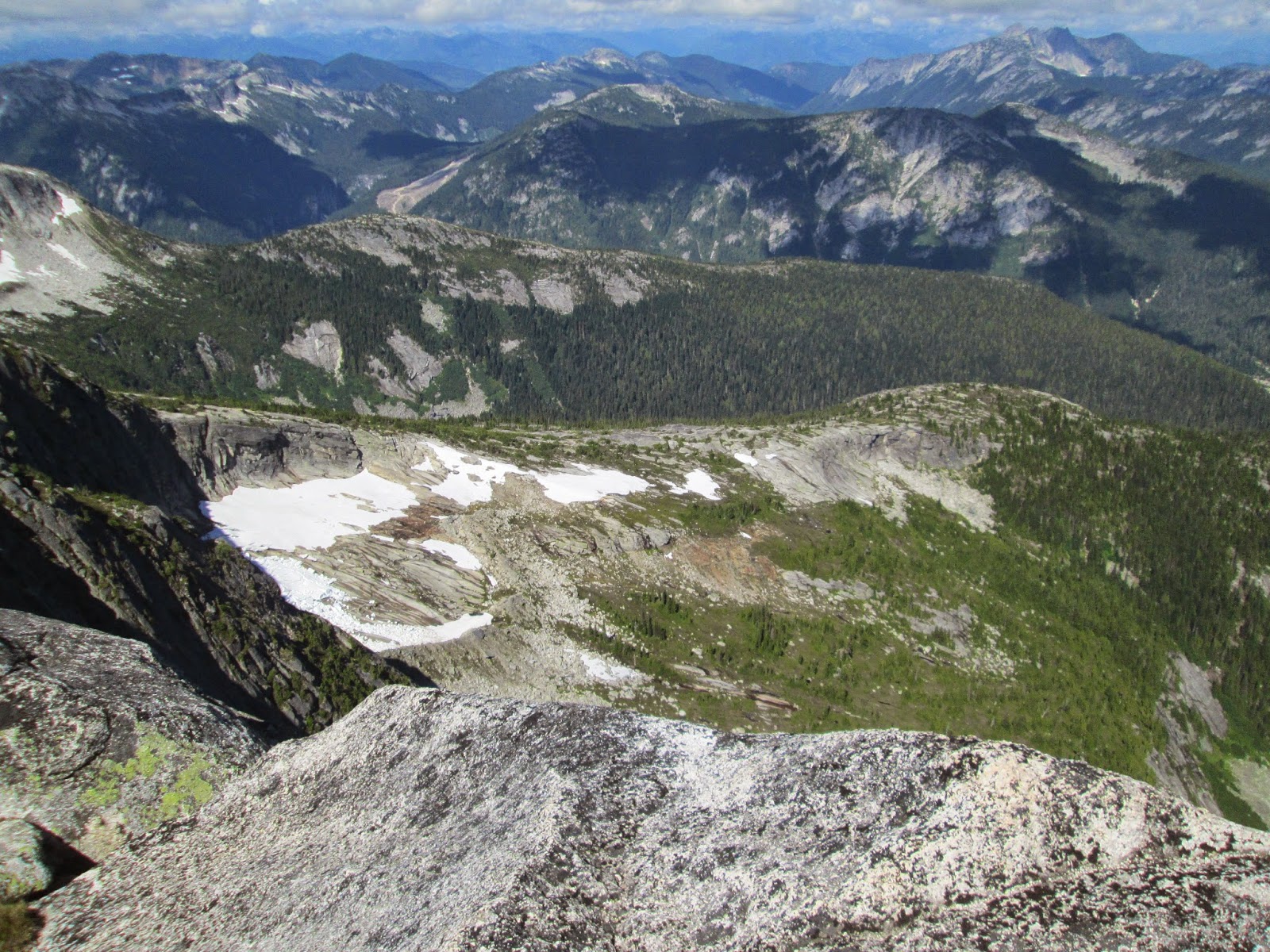 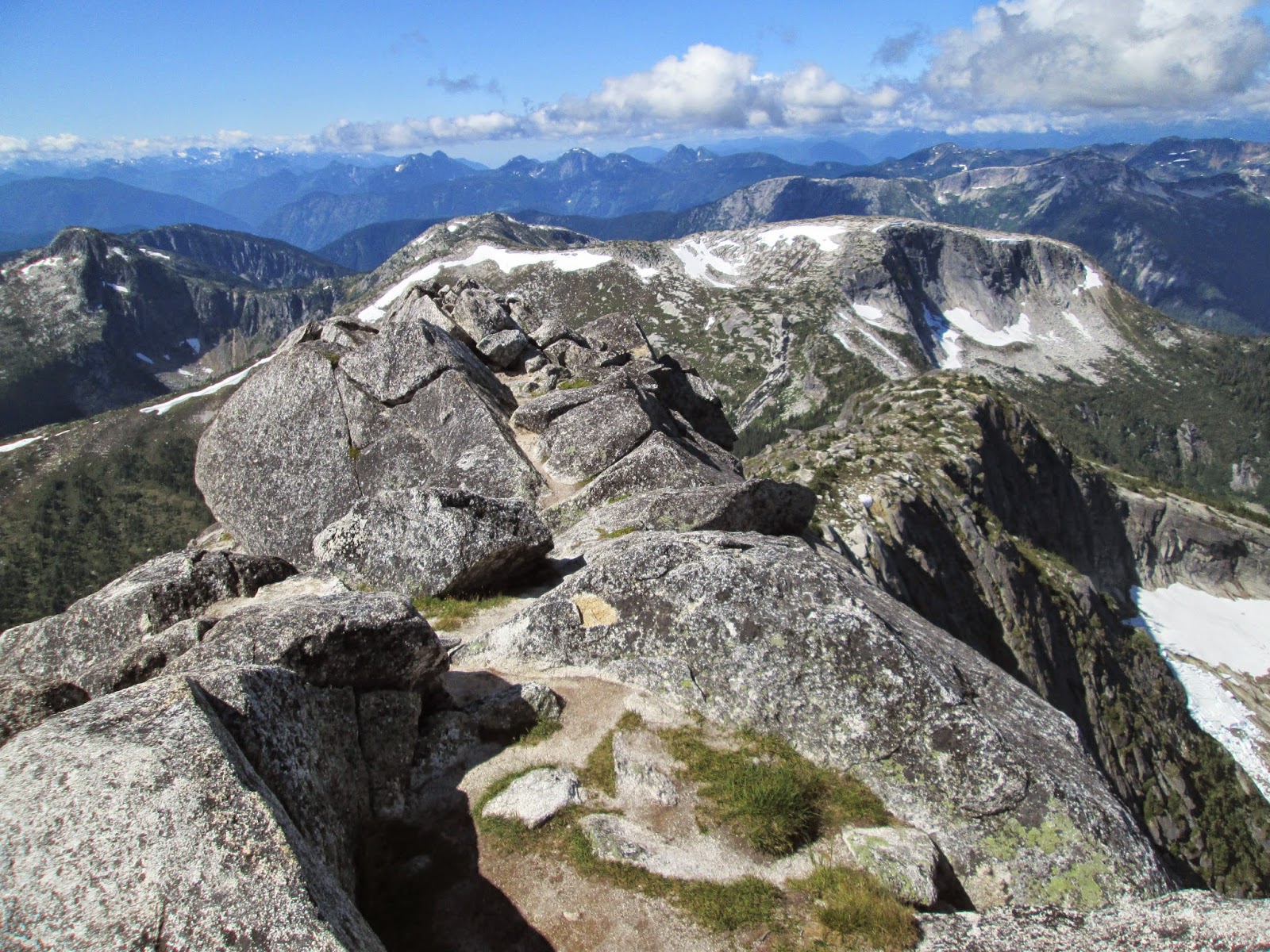 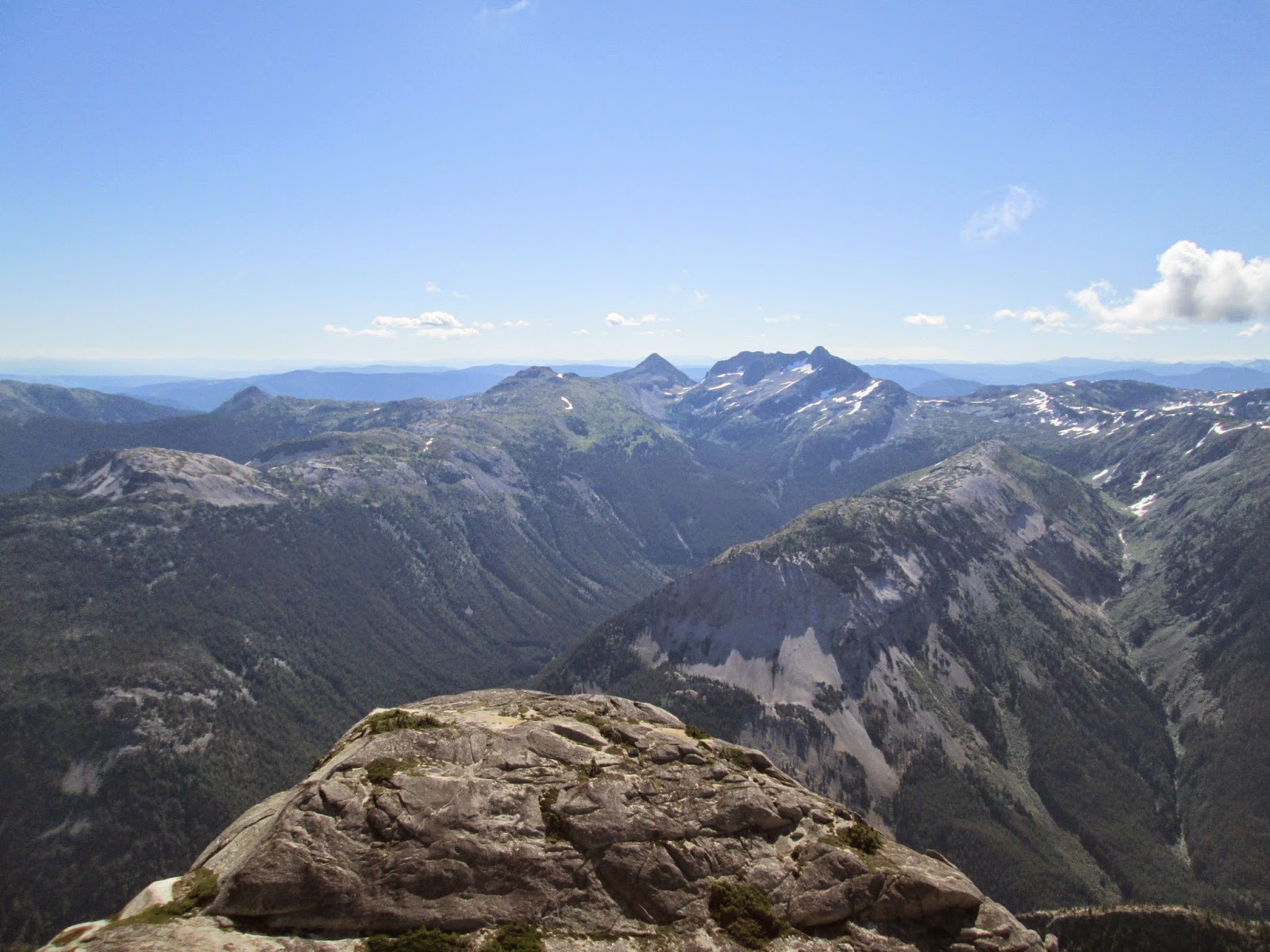 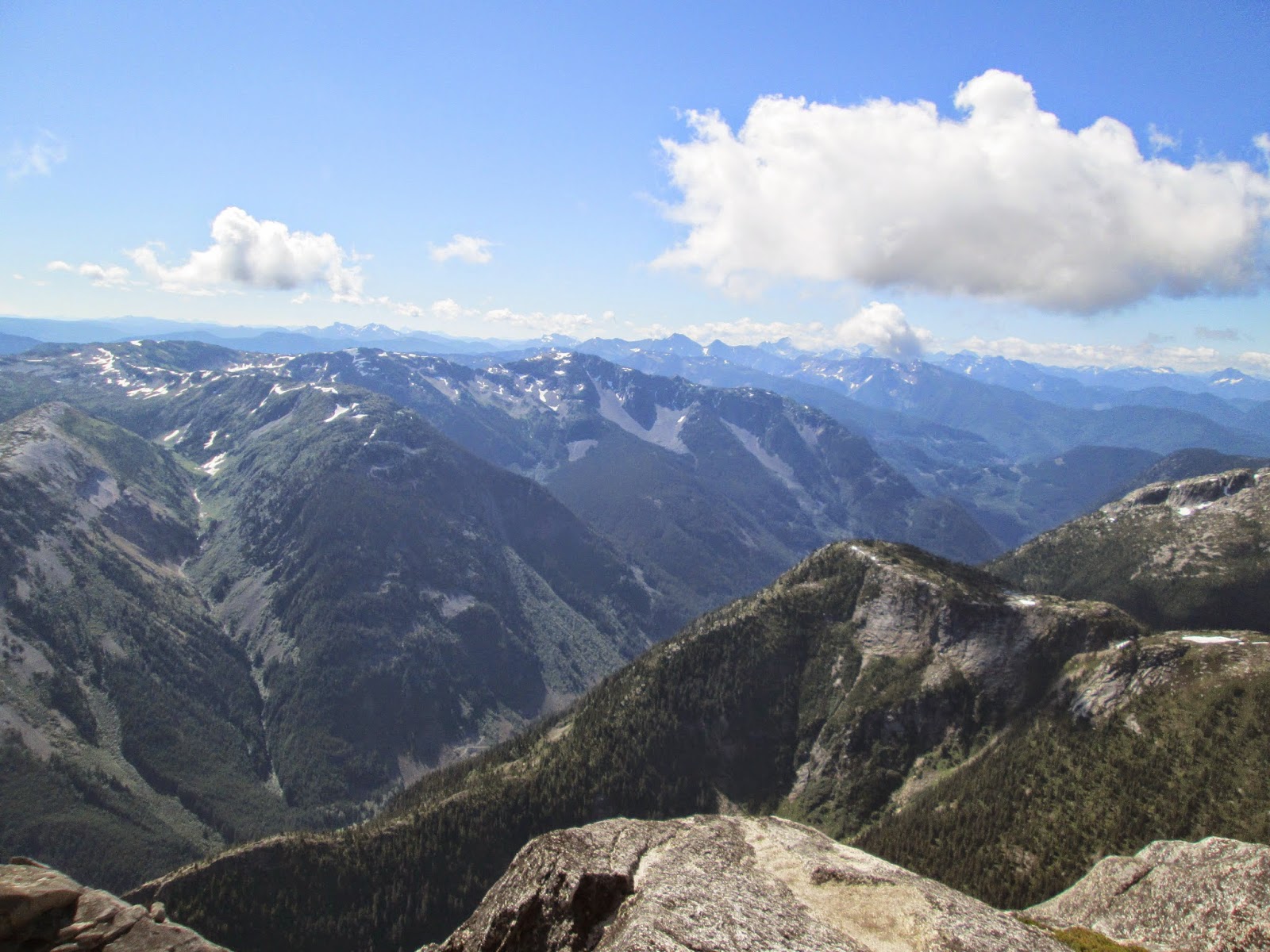 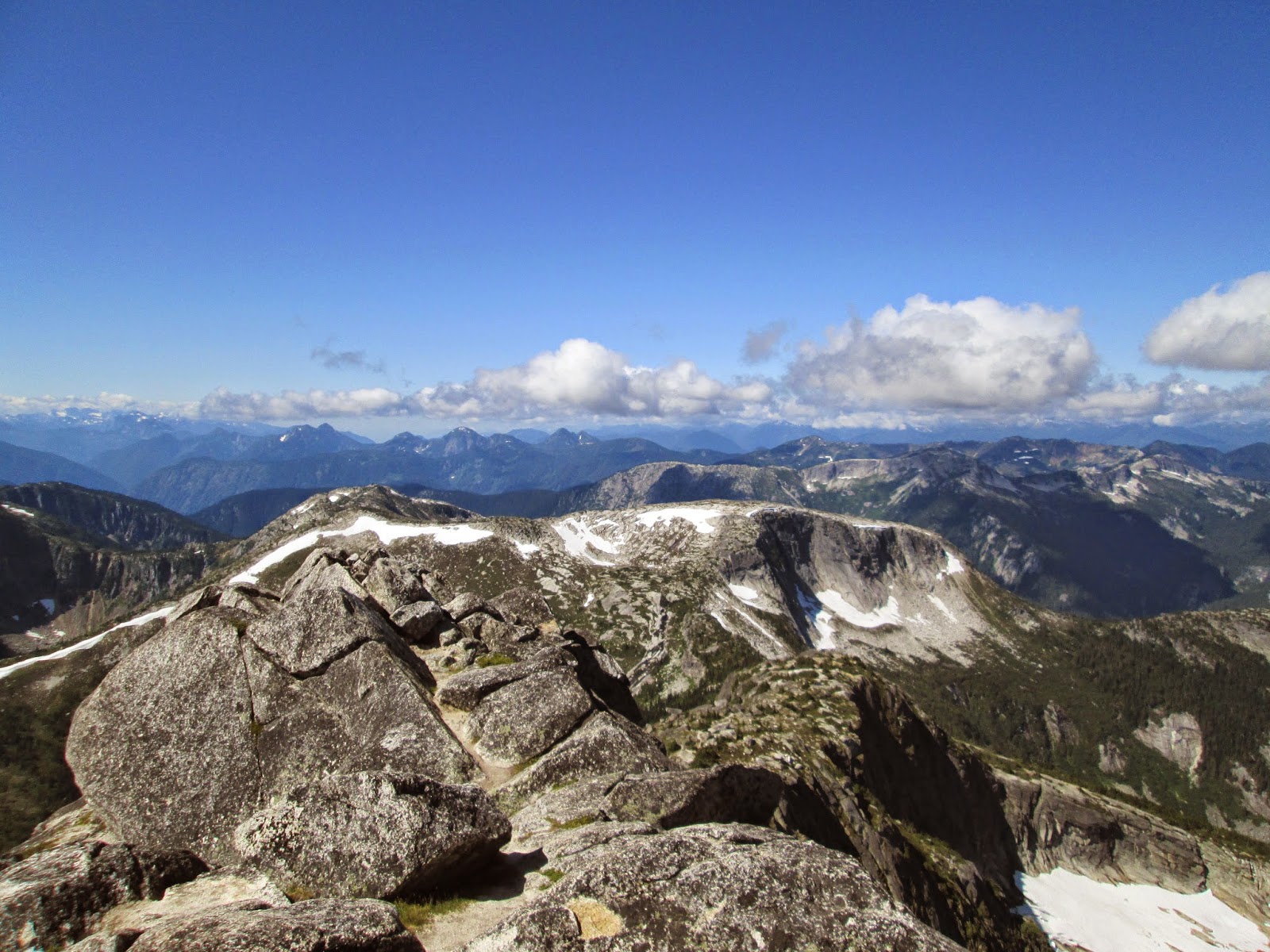 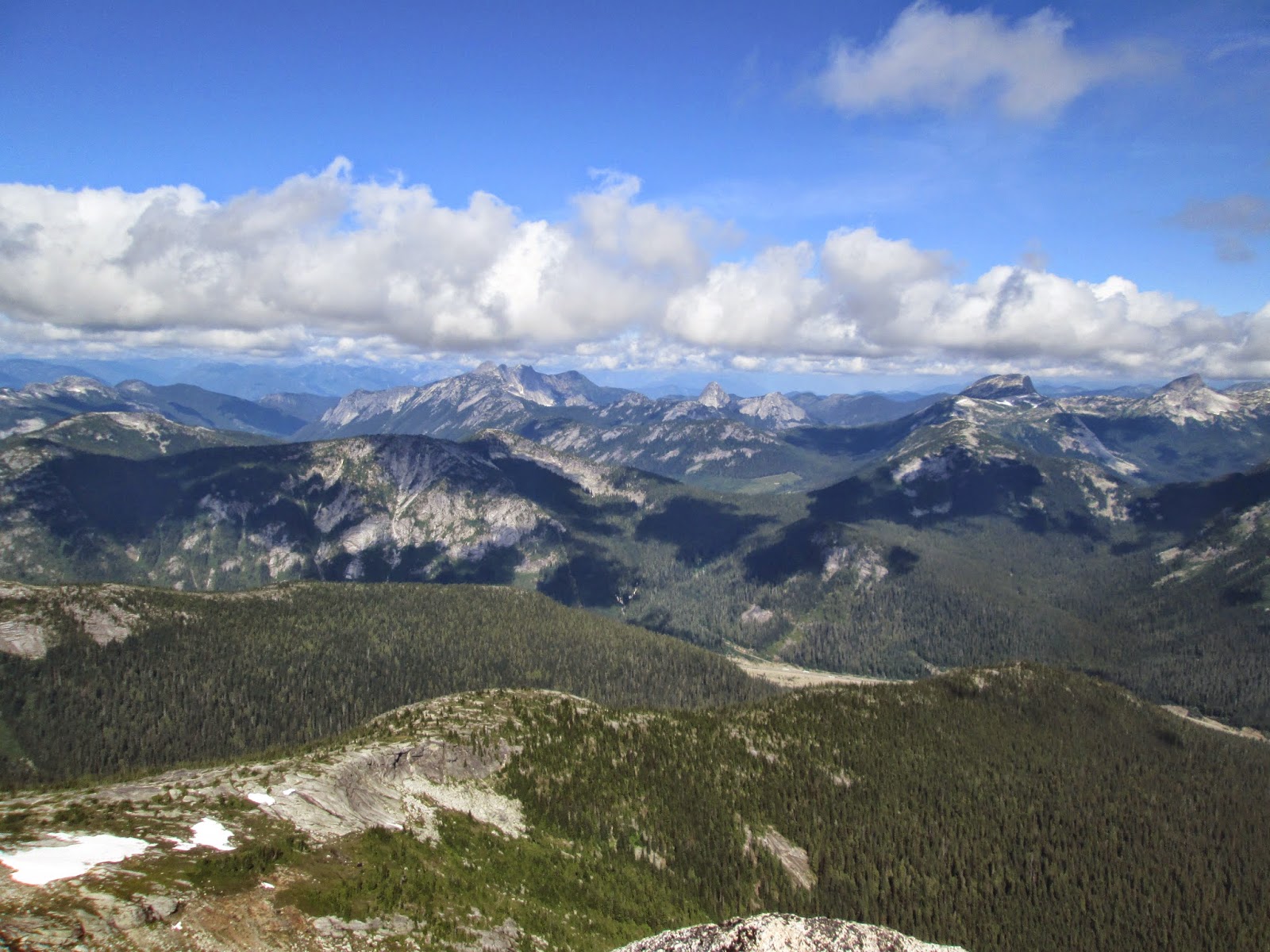 The climb back down wasn't as bad as I had thought it would be.  There was a crevice that we managed to climb down that didn't have the terrifying drop off that the climb up had.  It would have been difficult to climb up this route as there was a pretty big drop from the ledge of the top to the crevice, but going down wasn't too bad.  After this it truly was easy the rest of the way, though I think I had vertigo for the next day and a half.

I enjoyed my first hike in Coquihalla Summit Recreation Area.  It was an exciting experience, and the reward was well worth the scary sections.  It felt good to have challenged myself and not backed down, but I think I may need to buy a new pair of hiking pants.
Posted by Clueless Hiker at 14:21