Me and my Dad did a hike up Silverdaisy Mountain last August, and being the lazy person that I am, I'm only just getting around to typing it up.  Sorry to the legion of nonexistent people waiting anxiously for an update.  Your imaginary suffering pains me.

This hike marked my first time in Skagit Valley Provincial Park, though I was only actually in the park for about 1.5 kilometers.  Silverdaisy Mountain lies in an unprotected region that is surrounded by Skagit Valley and EC Manning Provincial Parks.  As it is not in a park, the trail is not maintained by BC Parks, so it isn't in the same kind of condition as most of the trails in the area.  The conditions reminded me of a more extreme version of the Mount Outram trail.  I don't think this is a very popular hike which would explain why it isn't in super pristine condition.  I wouldn't be surprised if less than ten people attempted the hike in 2013.

The hike takes off from Sumallo Grove, following the Skagit River Trail for the first kilometer and a half.  The area here is fairly pleasant; I don't know that much about this trail, but from what I've seen I would be inclined to return to do more of it sometime.  It strikes me as an area that would make for nice snowshoeing in the winter.

The hike winds through some dense coniferous forest, bumping into the river here and there.  It eventually gets to the Silverdaisy trail head which (unlike Outram) isn't marked by a proper sign designating where the trail goes (there is a little "adopt a trail" marker though).  If you weren't looking for it, you probably wouldn't know it was there.


The early part of the hike climbed through the thick woods.  It didn't have as intense a grade as some of the hikes in the area, but it was still fairly grueling.  My knee wasn't in great shape that day so I was moving about as slow as possible (short of slowing my bodies internal particles to a halt, thereby cooling my body temperature to absolute zero and presumably killing me).  The steep grade was made more difficult by the condition of the trail itself.  There was a lot of growth on the trail that you wouldn't find on any trails in the actual parks.  There were low tree branches jutting out and plenty of windfalls to climb over.  There were a number of times where the growth was so thick that I couldn't actually see where I was planting my feet, and looking down would open me up to a tree branch in the face (this happened many times).  I shouldn't complain too much, because it isn't a high use trail, so I don't know if it would be worth the effort for someone to clear it up. 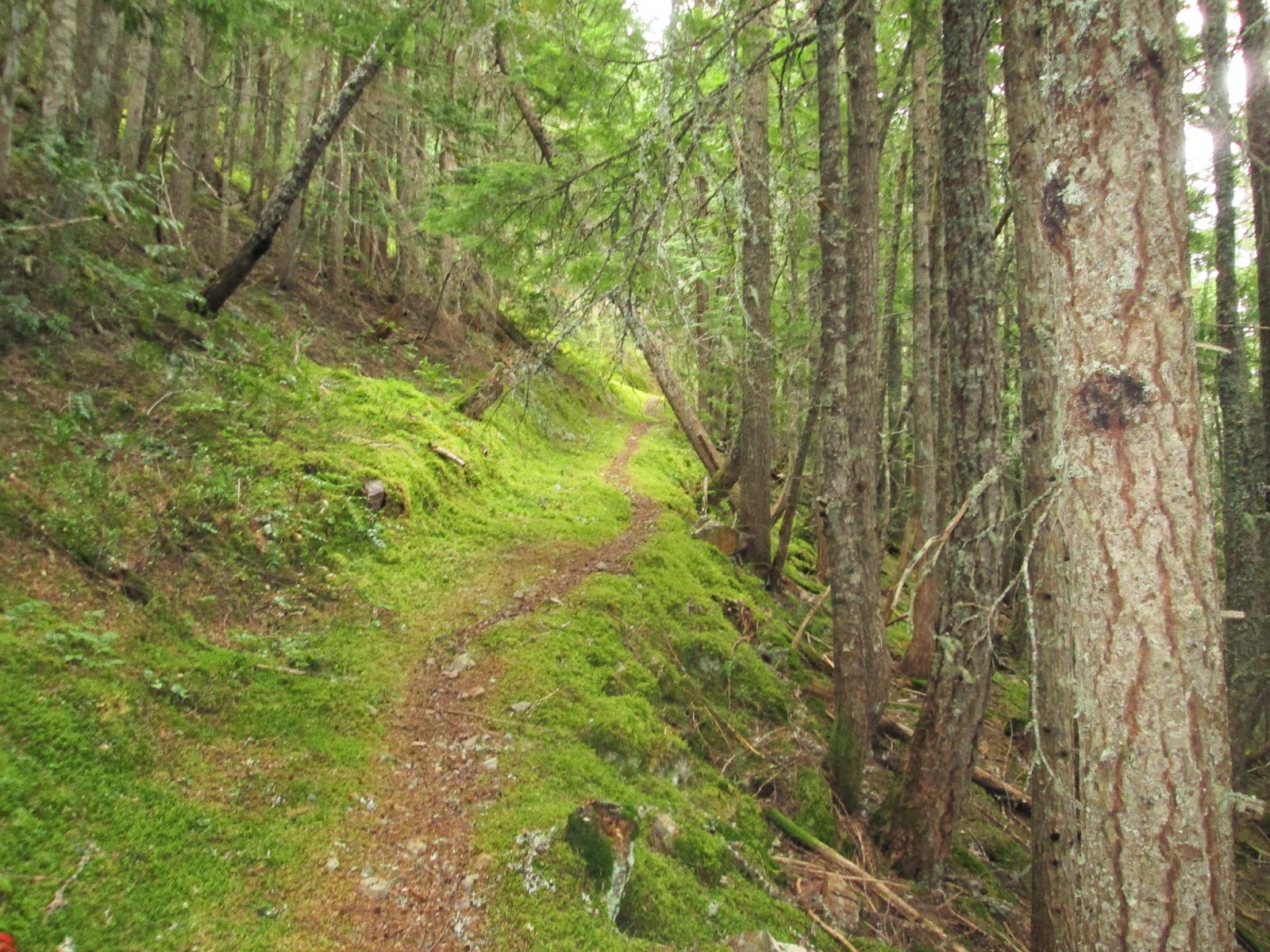 The trail eventually turns onto what seems like and old logging or fire access road of some kind.  The turn off isn't really marked and it would be easy to get lost if you weren't paying attention or didn't know where you were going.  We hit some wet patches as there was a creek running down bits of the old road.  The view eventually opened up a bit as we hiked in the shadow of what I presumed was Hammerhead Mountain.  We got the odd view of the Skagit Valley as well. 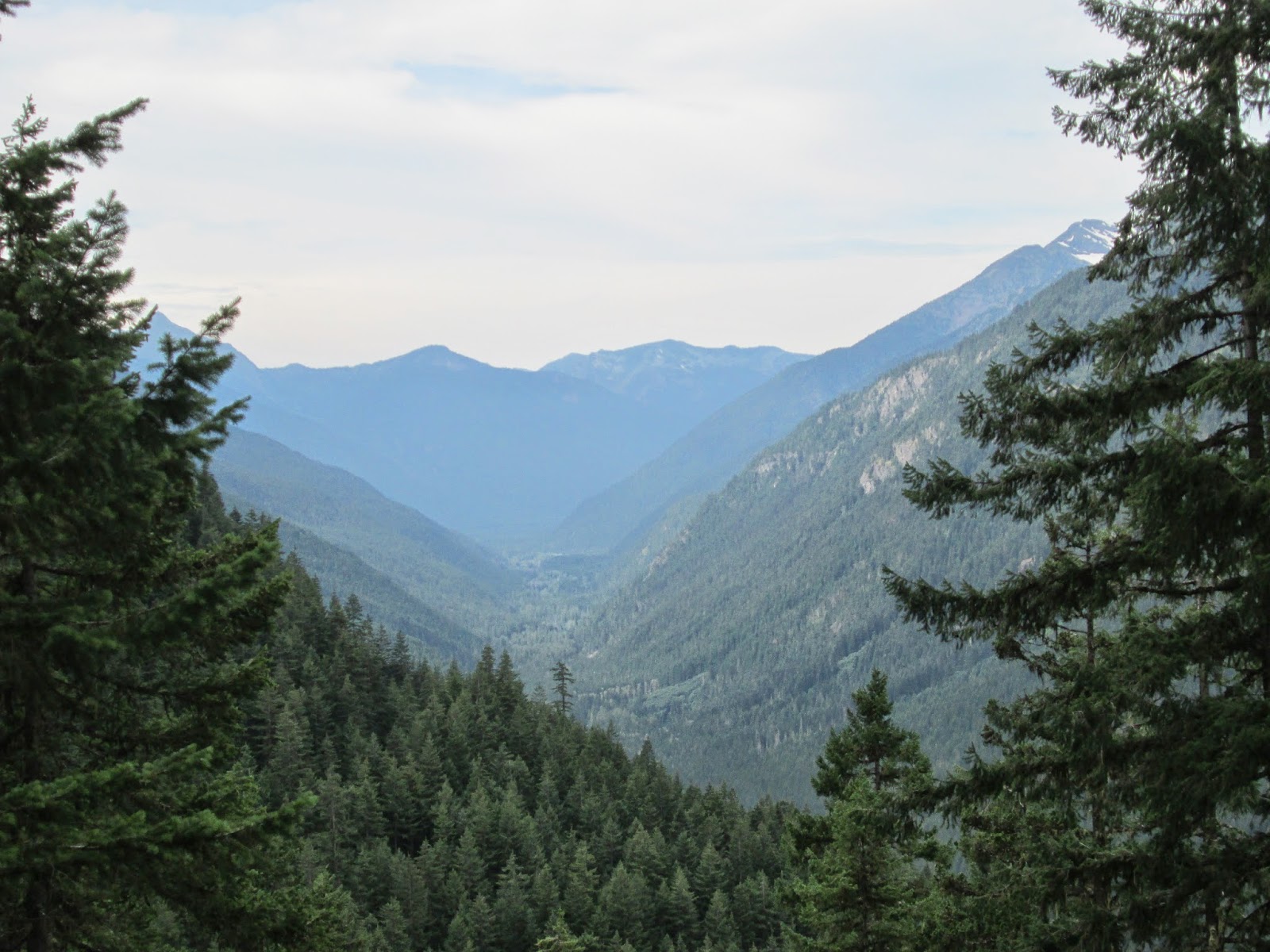 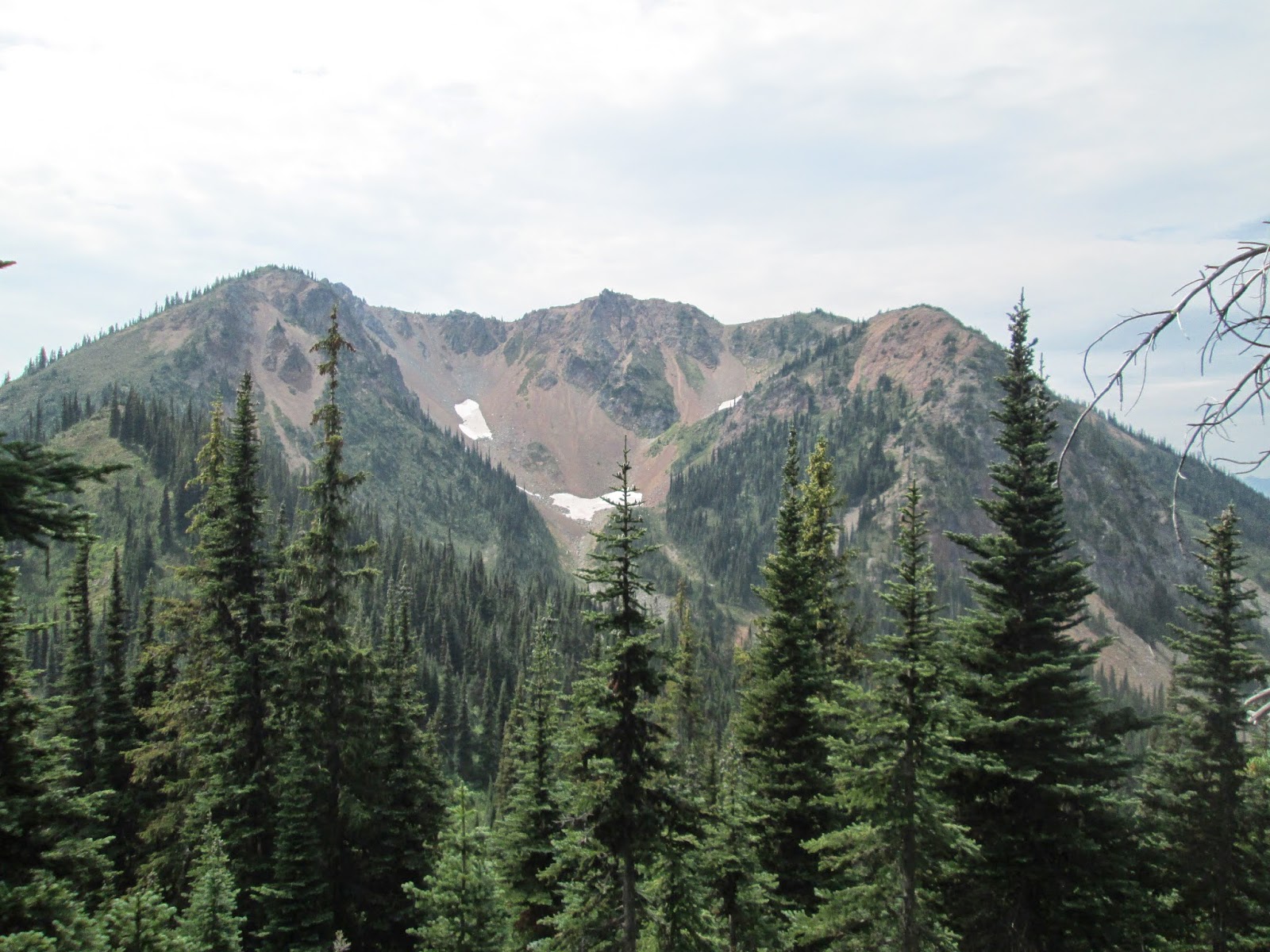 The old road reached the height of wherever it was supposed to go and started down the other side of the mountain.  There was another (unmarked) turnoff here.  We knew about the turnoff, but still ended up off the trail hiking in the wrong direction.  It only took about five or ten minutes before we realized our mistake (I was leading the way, so I guess it was my mistake, but I don't like admitting blame) which was fortunate.  Given the state the trail was in, it was not immediately obvious that we weren't on the trail, so we could have been going the wrong way for a long time.  We got back on track and followed the trail into a more open area with sparser growth.  We got on top of a ridge that had some nice views looking down.  We couldn't actually see the top of the mountain and didn't even know what it looked like anyways, so we had no idea how much time we had to the summit (and our turn-around time was looming).
After a bit more semi-bushwacking, we got to a pleasantly meadowed plateau.  To this point our difficulty following the trail had been minimal.  However, when we got to the meadow, it was not really obvious where to go.  We found what looked like a flagged route and started up it, though we weren't really sure we were going the right way.
The route took us up more meadow.  This was actually pretty nice as there was no trees or bushes to fight with for the most part.  We eventually ended up cutting through the trees onto the ridge of Silverdaisy.  We followed the ridge up for a bit, over a number of always frustrating false-summits.  As our turn-around time passed and as we acknowledged that there was a chance we had taken a wrong turn, we stopped at what seemed like the high point.  I'm pretty sure it wasn't the proper summit of Silverdaisy, actually, I kind of think we were less than five minutes away which is a bit of a tick off.  We didn't want to have another Outram-like experience, coming down thick bush after it had started getting dark, so I don't regret the decision to stop.  The views were pretty nice, though it wasn't as scenic as some areas in the Manning-Skagit region.  I definitely don't regret the hike; it was an ordeal and felt like legitimate bush-whacking in places, and there was some decent scenery.

More information about the trail can be found here. 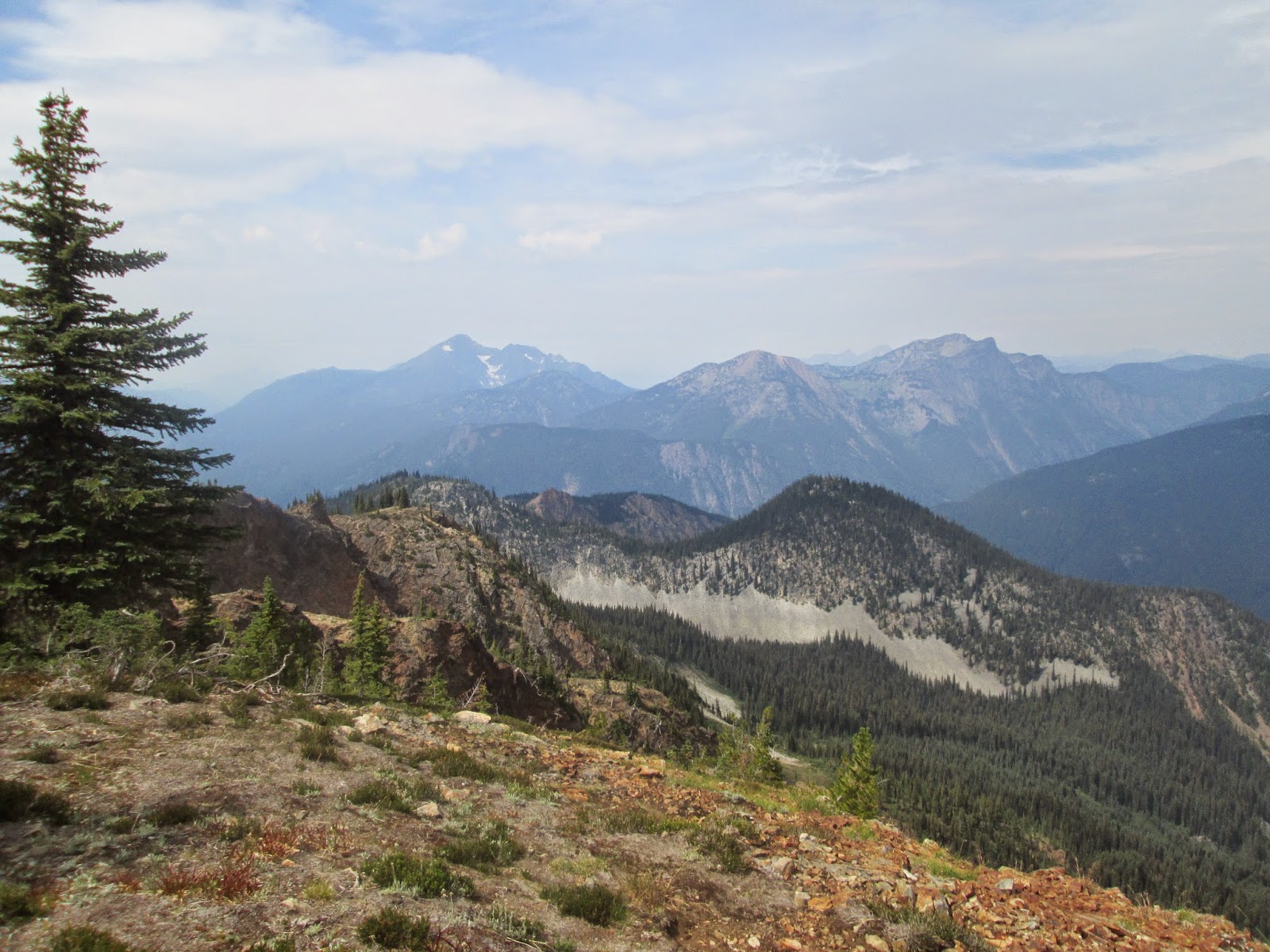 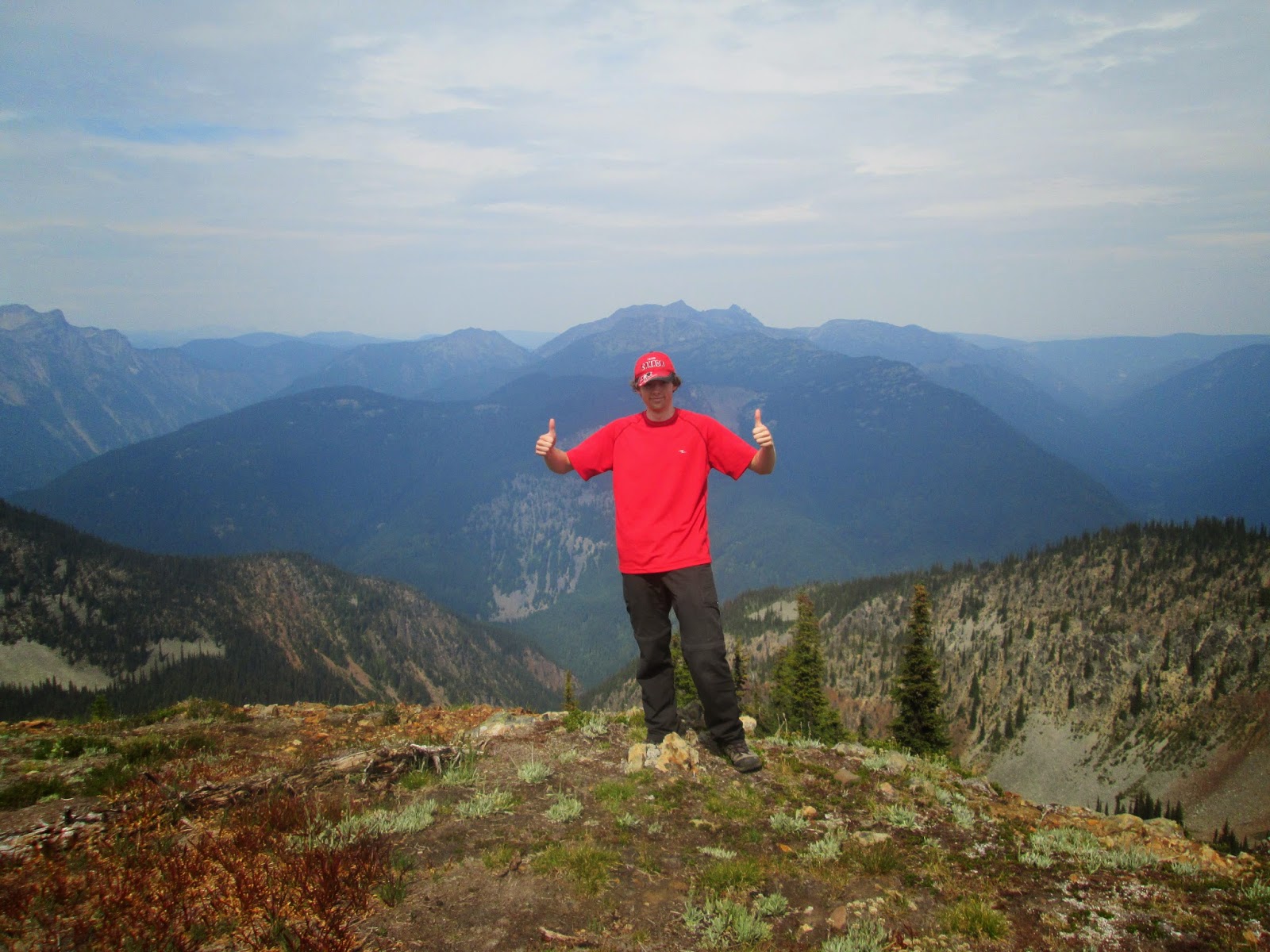 Posted by Clueless Hiker at 23:37 No comments: