When we were at orientation we were told we wouldn't get rained on at all.  This had been a huge relief for me, as I knew that any amount of precipitation could make an already challenging trail miserable.  After two days of great weather and one day of okay weather, we were feeling really spoiled.  Even with the fog and moisture on day 3, the weather had been very manageable.  However, it wouldn't be a true West Coast Trail experience if we didn't get rained on...

It immediately became apparent that the trail would be completely different after Walbran Creek.  Before this point we had to deal with a moderate amount of challenges like mud, roots, ladders, and broken boardwalks.  The trail had been very difficult, but there were easy sections in between the hard parts.  There had been a lot of good boardwalks, the ladders were never too long, and there were always long dry patches of trail.  However, after Walbran Creek it seemed like the trail turned into a total obstacle course.  Every single step seemed to require thought.  The challenges like mud and roots were much more frequent than before, and there were many more places where we had to climb over fallen trees (I felt very fortunate to tall in these places) or under fallen trees (sometimes I hate being tall).  There were long stretches of log walks that would occasionally get high enough to be a little scary, and the trail got a little difficult to follow in some places.  This is where I began to understand why the West Coast Trail has the reputation it has.  I don't really know how to properly describe the experience of hiking from Walbran Creek to Gordon River, but I guess I could say that it's like a miserable sort of fun. 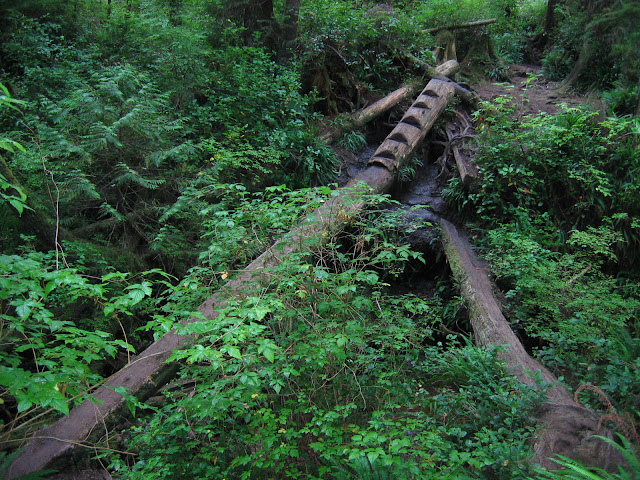 After we had been hiking for about a half hour it began to rain.  At first it was a light drizzle that didn't really impact anything, but it got heavier and heavier as the day wore on.  This rain made everything much harder.  The few sections of the trail we encountered that would have been easy now required much caution and thought.

By the time we got to Logan Creek the rain was heavy enough that we had to put our pack covers on.  This was actually the first time I had used my pack cover, and I was quite impressed with how dry it kept my backpack.  My dad had a lot of things tied to his backpack and was a little worried that his cover wouldn't fit properly, but it ended up working really well (the tarp he had tied to his pack actually helped keep the cover in place).

At Logan Creek we saw the impressive suspension bridge we had heard about.  It was  a little narrow, but I felt incredibly safe when I was crossing it.  The ladders down to the bridge weren't any worse than anything we had encountered, but the ladders going back up to the trail were probably the scariest ladders on the trail.  They went up a cliff, and one of the ladders went up it at an angle.  That ladder was also tilted slightly and was incredibly awkward to climb.  I kind of regret not taking some closer pictures of the ladders, but I really just wanted to get to the top. 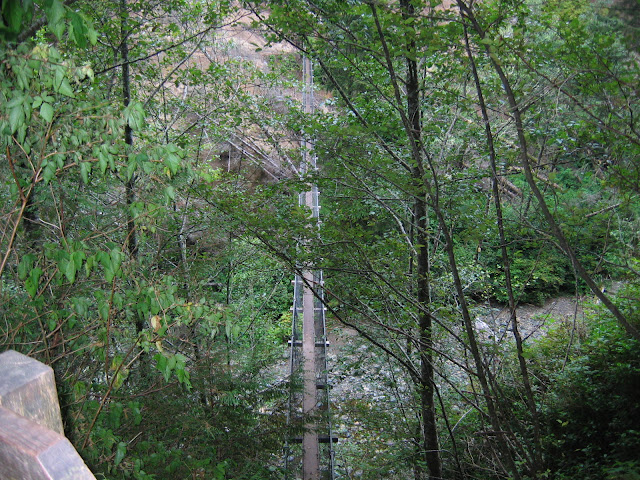 We took a short break and then resumed hiking.  After a few kilometers we reached Cullite Creek where we encountered the biggest ladder set on the trail.  This ladder set was not nearly as big as I had been expecting.  There were only about 7 ladders each way which, despite being a workout, was not as exhausting as I thought it would be.

Shortly after Cullite Creek it really started to pour.  It wasn't the monsoon-like rain I had heard about other hikers encountering, but it was still easily the worst rain I've ever hiked in.  The kilometers seemed to wear on a bit more and I found myself getting incredibly mentally exhausted.  I had never really thought about it, but part of why I love hiking so much is because of the times when you stop thinking and lose track of time and kilometers.  I was susrprised that being mentally drained made hiking harder than being physically drained.  As I mentioned, every step required forethought and decision making, but after a while I stopped thinking and ended up making some really bad decisions.  It is very lucky that I only had one fall that day (actually, it was more like I tipped over; it wasn't really a proper fall).

Our plan had been to camp at Camper Creek, then hike to Thrasher Cove the next day, and then finish the trail.  However, we realized that we wouldn't have a low enough tide to hike around Owen Point on day 5 (one of the highlights of the trail), which would mean hiking one kilometer of the inland trail to get to Thrasher Cove.  Based on how hard every kilometer was on the trail we didn't like the idea of hiking one of them twice.  We were also a little concerned that it would continue raining, so we decided to hike a little further so we could finish the trail the next day.  We were taking a bit of a gamble since our experience with finding unofficial places to camp had been a little frustrating, but we decided to take the chance.

There were two beach accesses on the map.  One was at the 65 km mark (access A) and one was at the 66 km mark (access B).  When we got to the first beach access we saw a perfect area for camping.  The trees really sheltered the ground, so we would be able to set up our tent without getting rained on.  It was also very spacious and offered many areas we could set up.  However, we elected to press on, hoping to make the next day as "easy" as possible.  This gamble did not really pay off.  There were areas to camp at the second beach access, but they were more exposed to the rain.  As a result we had to set our tent up in the rain.  I'm not sure if it was from the rain while we set the tent up, or if it was from our wet clothing and gear, but we ended up with a fairly large puddle in the tent.  For whatever reason this puddle decided to make itself home on my side of the tent.  It was actually bad enough that I decided not to use my down sleeping bag, since there would be no way to avoid having it end up in the puddle.  Instead I bundled up in my driest clothing and my dad's sweat pants (he was awesome enough to let me borrow them).  Oddly enough I actually slept a little bit better than I had on any other night on the trail.
Posted by Clueless Hiker at 02:14