We woke up on day 5 tired and a little sore.  After the exhausting previous day we were planning on taking it a little easier.  We didn't worry too much about when we got away, but we still ended up on the lake fairly early.  Lanezi Lake very quickly turned into a channel that emptied into Sandy Lake.  There was some evidence here of a forest fire from several years ago, though the area appeared to be recovering.

The aptly named Sandy Lake was very different from Lanezi Lake.  The water had an odd colour because of the sand floor, the lake had a round shape instead of a long one, and there were beaches everywhere.  We had spent a lot of time the day before looking for a beach to camp on, and now that we didn't need one, they were everywhere.  We kind of felt like the circuit had a sick sense of humour.
﻿﻿﻿

After Sandy Lake we ended up in the Cariboo River again.  The current was a little weaker than the other part of the river we had been in, so it was a lot easier to enjoy the scenary.  I also enjoyed not really having to put any effort into paddling.  After 4 days of canoeing my shoulders were getting pretty sore (though the fact that I have the upper body of a 12 year old is probably to blame)

We went past Babcock Creek and continued down the river before we turned into Unna Lake.  We had decided to make a side trip to see the Cariboo Falls, which we had heard was one of the highlights of the circuit.  After we got to the trail head we ate a quick lunch and then started the trail.
﻿
The short trail to the falls was pretty easy, though I could tell that it would be a pain if the ground was wet.  There were some pretty steep ups and downs, but these were all fairly short.  The trail went through a recovering forest where there was an abundance of huckleberries (my stomach later indicated to me that I had sampled too many).  Soon we could hear the powerful falls, and shortly after that, we got to the viewing area.  At 24 meters high the Cariboo Falls were very impressive.  We spent a lot of time here admiring the waterwall.  Unfortunately it was very difficult to get a picture that properly captured the beauty of the falls.  It is one of those things you have to see for yourself to truly appreciate.  Even though it is technically a side trip, I think everyone doing Bowron Lakes should take the time to see the falls.  In my opinion, it is the best part of the circuit. 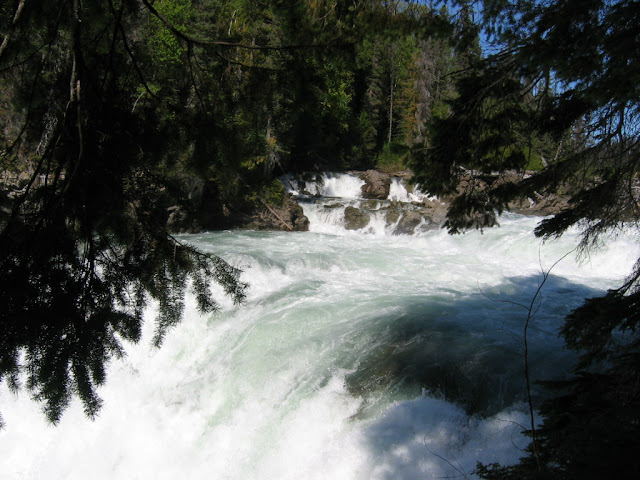 Upon returning to the canoe, we left Unna Lake and headed upstream to Babcock Creek.  We had to canoe in the creek for about half of a kilometer, but the water was very shallow, so we ended up getting out of the canoe and pushing it most of the way.  The 1.2 km portage to Babcock Lake was very easy, and we got to the lake in no time.  It was still fairly early in the afternoon, but we decided to stop at camp 43.  We didn't want to end up in another situation where we couldn't find a campsite, and the site at the start of Babcock Lake was very nice.

That evening we were lucky enough to see a mother bear and her two cubs.  They were down the lake a bit, close enough to see, but far enough away that we weren't concerned.

We stayed up a little later than we had on any of the other nights on the circuit (we actually had energy for once), not really all that worried about when we would get up.  We were planning on taking two days to go up the west side, and were hoping to continue the relaxing pace from this day.
﻿