We got up at 6:00 on day 3 and managed to pack up our things fairly quickly.  We were looking forward to what we were pretty sure would be our only day without any portages.  As we started down the main arm of Isaac Lake it became apparent that most other people were still in their camps.  Considering how large Isaac Lake is and how many camps are on it, it was really nice to feel like we had the lake to ourselves (even if it was only for a couple of hours).

We didn't have to go very far before we could see the main arm of the lake stretching out to what seemed like an infinite distance.  I really appreciated having clear skies here; it was one of the more amazing parts of the trip.
﻿ 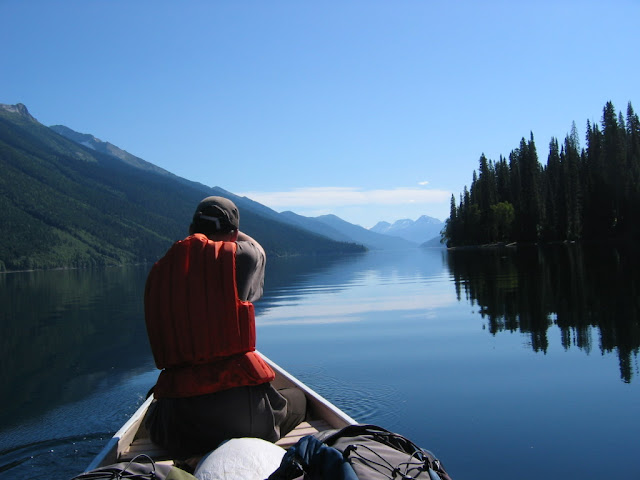 I was also really happy that we didn't have to contend with any wind.  I think we really lucked out here.  I don't find that canoeing in calm waters strains any of my muscles, so my body was able to completely recover from the portages (if you hadn't guessed it already I was really out of shape).

Pretty soon we started seeing some of the nicer mountain peaks.  It was kind of distracting, and at one point we ended up getting our canoe turned around while we were trying to take pictures.
﻿ 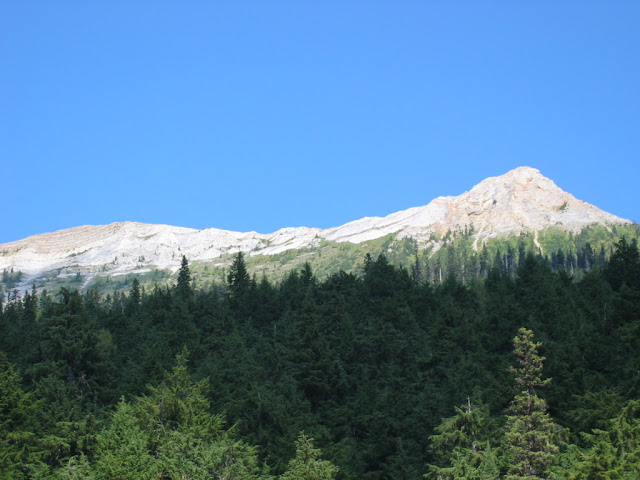 We had been hoping to make it halfway down the main arm, but at lunch we realized we would be able to make it quite a bit closer to the end of the lake.  We stopped at camp 24 which was a cozy campsite we ended up having to ourselves.  We managed to find a lot of firewood littered around the campsite and beach, so we were able to make a fire without having to find a wood lot.  The wood was pretty wet and I wondered if we would actually get a fire going, but somehow Dad managed to start one.  It was a really nice luxary to have, especially since a lot of wilderness camping areas don't permit camp fires.

I was a little sad when I realized we were pretty close to being halfway through the circuit.  So far I had been having a great time, and really didn't want it to end.
Posted by Clueless Hiker at 01:55