Exhausted from the portages the day before, we slept in a bit, though we still managed to get away at a decent time.  I found my energy levels were a lot higher than on day 1 (I had still been recovering from the long drive), and I was looking forward to spending a day canoeing.  Indianpoint Lake was pretty big compared to Kibbee Lake, but it seemed to go by very quickly.  At the end of the lake there was a marked channel leading through the thick marsh.  After the channel was the landing where the portage to Isaac Lake started.  The beach was incredibly muddy and looked like it would be a pain to get through, so we unloaded our bags on an old dock and lifted the canoe up.  Based on what I saw other people going through, I think that is the easiest way to get out of the lake.﻿
﻿﻿

﻿
﻿
The portage to Isaac Lake was much easier than the portages from day 1.  The trail was a lot flatter, and there was considerably less obstacles on the trail.  I found myself enjoying the woods much more on this portage, and it didn't feel like it took very long.  The 1.6 km portage ended at the start of Isaac Lake, which is the largest lake on the circuit.  It has two arms that make almost a 90 degree angle with the west arm being 6.8 m long, and the main one being 31.2 km long.
﻿

﻿
We ate lunch before starting on the lake, which we knew we would be on for several days.  I had been expecting it to be incredibly windy, but it was very calm.  This made for some interesting reflections along the shore of the lake that almost looked like rock walls.
﻿﻿ 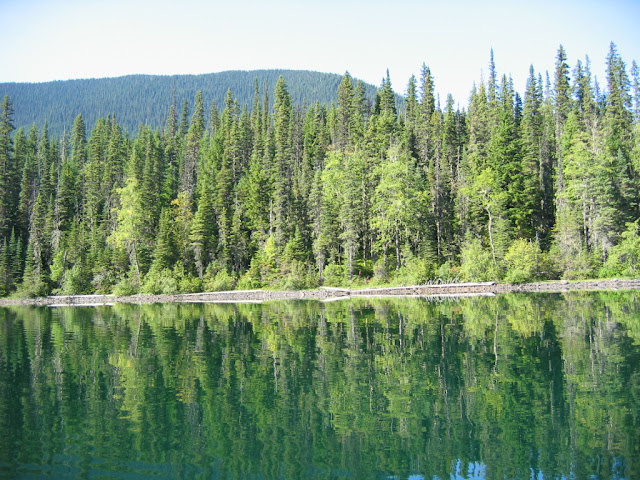 Given that we were doing the circuit at a time of year that wasn't very busy, pretty much every campsite in the area had an opening.  It was really nice knowing that we could camp at whatever site we wanted without worrying about getting there before it it was full.  We decided to stop at camp 15 which has a cook shelter.  It was easily the nicest campsite we stayed at.  I really appreciated having a table to eat supper at, and the tent sites were placed in a way that made them fairly private.

I went to bed pretty early again, looking forward to going down the main arm of Isaac Lake.
﻿