The Mount Outram Trail goes up Mount Outram which is just outside of Manning Park.  It is higher than any mountain in the park, with an elevation of 2461 m.  It gains 1781 m of elevation over the course of 9 km, and is easily the most difficult day hike I have ever done.  I did it this year partly because I knew it would be really scenic, and partly to test my physical ability since I'm planning on doing the West Coast Trail soon.  Right now I consider myself to be in pretty decent shape (I'm in better shape than I've ever been in my life), and I still found this hike to be ridiculously difficult.  I'm glad I did it as the views were amazing, but it required a tremendous amount of effort.

The trail starts at the West Gate parking lot, which marks the western entrance to Manning Park.  The trail briefly follows the Engineer's Road which is in the park, but at the Ghospass/Outram junction it leaves the park.  The trail is not maintained by BC Parks, and while it is still very well marked and maintained, there are more deadfalls then you would find on a trail in the park.

Early on the trail climbs up through the woods which is fairly grueling, though it isn't necessarily any harder than some of the hikes in Manning Park (it's comparable to the Frosty Mountain hike).  Through this portion of the hike I was pretty satisfied with how my body was holding up.  I wasn't in significant pain anywhere, I was able to hike for reasonably long stretches without needing a break, and I was not drinking very much water.  However, the trail eventually crossed a stream and began to leave the woods.  It climbed into a bit of a meadow where I was no longer protected from the sun, and where the air seemed a little thinner.  I started running out of breath pretty fast, and ended up taking a break every few steps.  On the plus side there were finally some views of the mountains. 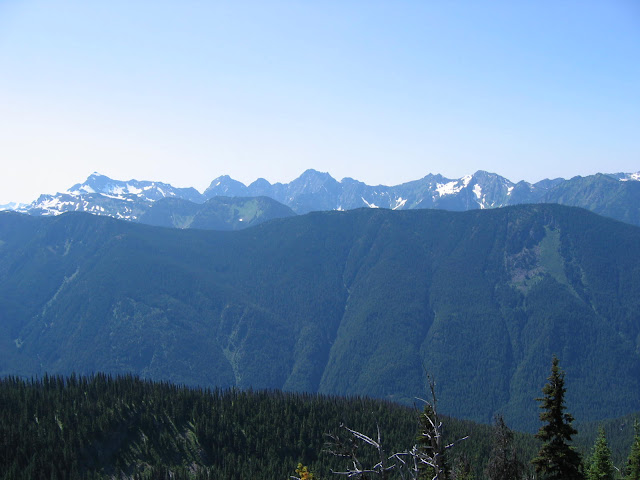 I knew I needed to take a bit of a break to recharge for the push up the summit, so I stopped in the meadows, by a nice little pond. 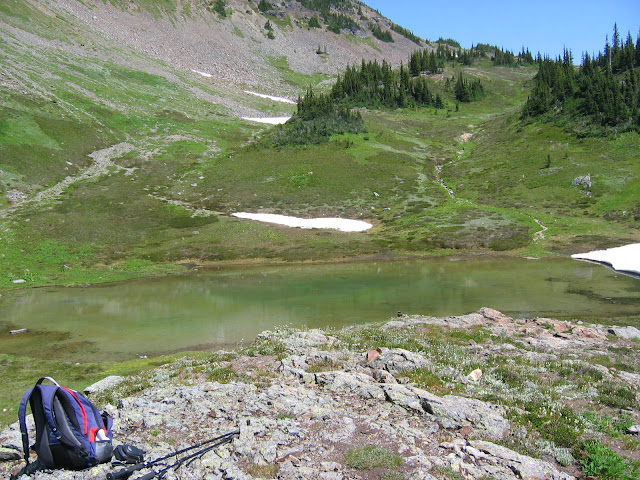 The climb ahead looked very strenuous, and I knew based on what I had read about the trail the the summit would not be visible for most of the trail.  Feeling slightly refreshed from my break I began up the mountain, but found myself exhausted fairly quickly. 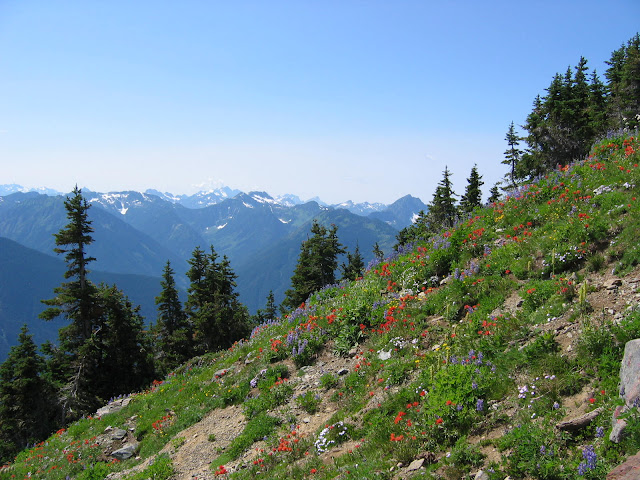 Towards what appeared to be the top the trail veered off to the side, and I saw what I would be fighting with for the rest of the hike. 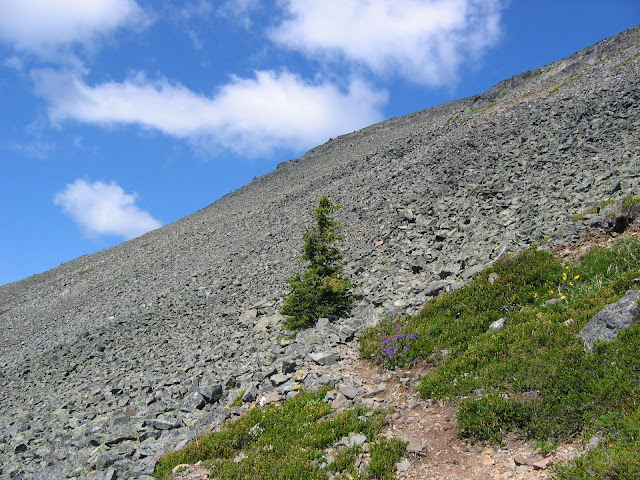 The trail went onto the scree slope, and pretty much stopped being a trail.  From this point the route was marked with red paint on the rocks, though at times it was very hard to find these markers.  The "trail" went up pretty steep at times, and these rocks were extremely hot.  Every time I thought I was at the top, I saw another long climb on these rocks ahead of me.  It seemed like it would never end.  Eventually I reached the top of the mountain in considerable pain.

The views from the top did justify the pain it took to get there, though it took me a few minutes before I had the energy to appreciate them. 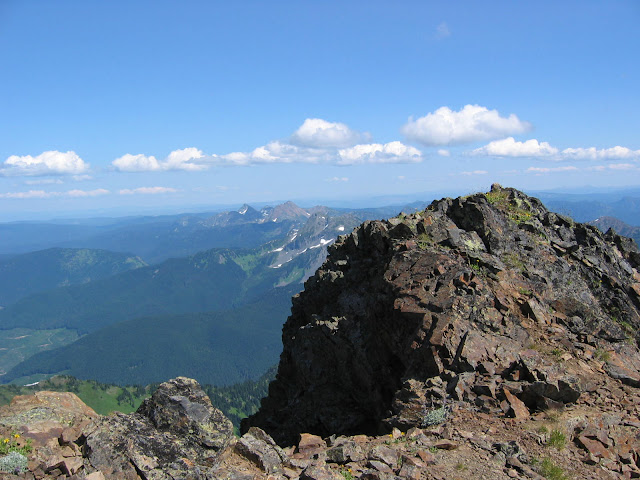 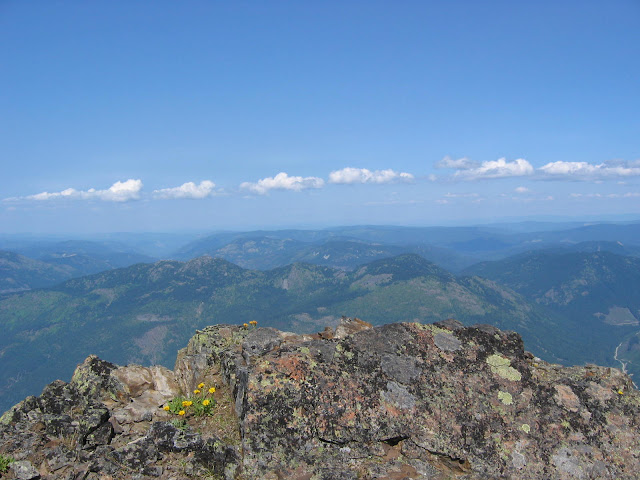 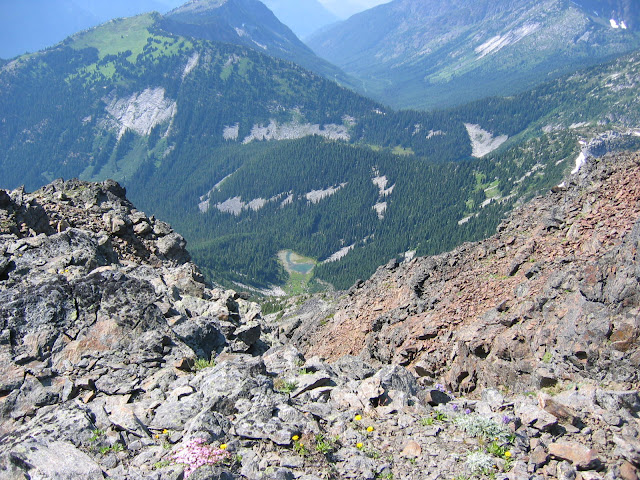 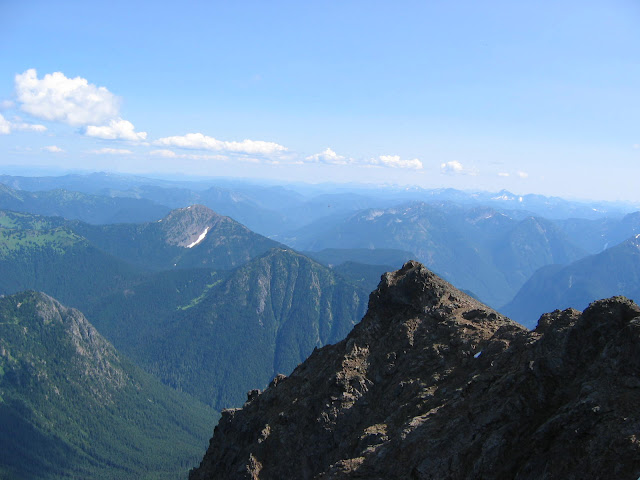 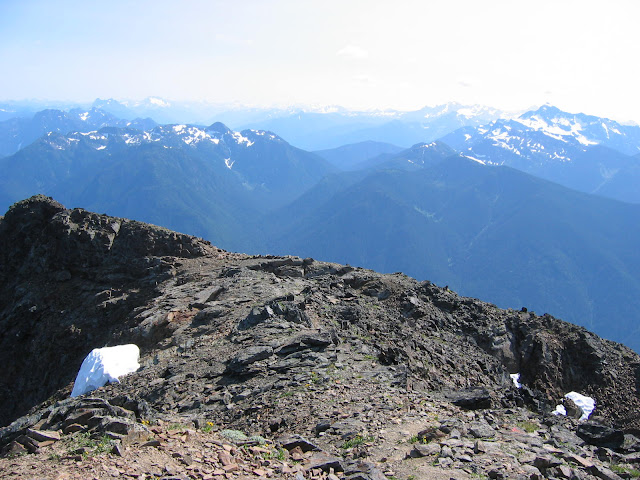 I was pretty satisfied, until I looked down and realized I still had to descend the talus.  I can safely say that going down was much, much more difficult than going up.  The footing was incredibly difficult at times, and the rocks felt even hotter.

From the meadow back to the parking lot wasn't really difficult, but I was pretty sore for the last little bit.  The hike is only 9 km each way, but it feels like a lot more.  I'm glad I did it, but it did take me quite a while before I stopped feeling the affects of it.  I can safely say that it made my feet hurt. 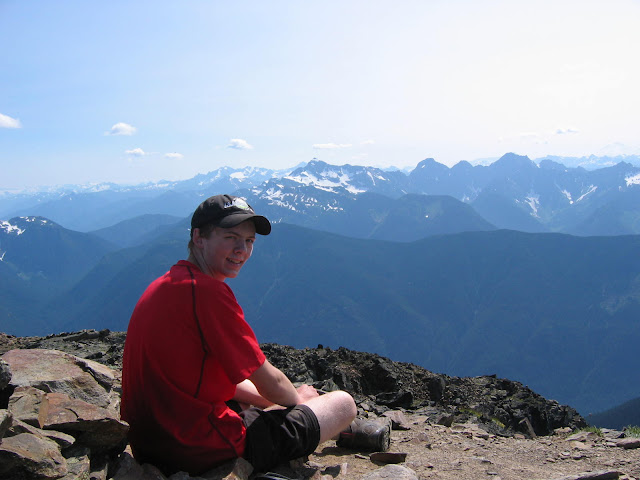