Manning Park is probably where I have done the most hiking, so I will be making a few posts on some of the hikes I've completed there.  One hike that is quite nice is the Lightning Lake Chain Trail.  It follows a chain of lakes: Lightning, Flash, Strike, and Thunder.  It is about 10 km from Spruce Bay to Thunder Lake, and about 12 km from the day use area to Thunder Lake.  The trail has very minimal elevation change, and is very well maintained.

A few minutes from Lightning Lake there is another junction, letting you choose which side of Flash Lake to hike down.  The north side of the lake is a little rockier, and has some plants that crowd the trail.  The south side is basically like the rest of the trail, and I find is a little better maintained.  Personally, I like to go down one side and come back on the other side, since each gives you a different perspective of the lake.  The first part of the lake is a little marshy and not overly scenic, but once the lake opens up, it is very nice.

Between Flash and Strike Lake is one of my favourite parts of the trail.  It follows the stream that runs between the two lakes, which is quite scenic.  The area has really lush vegetation, and overall is very peaceful.

Strike Lake is sort of shaped like a lightning bolt, though there aren't really any clear views of the lake.  Just past the end of the lake is the wilderness campsite.  I've never camped there, but it seems like a fairly nice campsite.  There is an outhouse, and some benches around a few fire pits.  Depending on the time of year, bugs can be really bad here.  I learned a really important lesson at this campsite when I was much younger (and stupider), when I tried to put bug spray on while swatting the flies, and ended up spraying it in my face (my eyes burned for a while).  It kind of sucked back then, but looking back, I think it's kind of funny.

After Strike Lake, the trail goes into the woods, briefly separating from the stream.  This area has some really dense vegetation, and is one of the last parts of the trail to be free of snow (I've encountered snow in late June here).  If there is snow at this part, you will likely encounter some avalanche debris up ahead.

The trail eventually leaves the forest and comes into an open meadow next to the stream.  This area is very beautiful when all of the plants are blooming, though the plants do make it hard to see the trail sometimes (and your legs might get scratched up if you're wearing shorts).  Also, the trail gets very rocky, so it is very easy to stub a toe or trip.  This part of the trail is much hotter than the rest of the trail, which for the most part, is in the shade.

When I hiked this trail in late June one year, I encountered a lot of avalanche debris, though it didn't stop me.  At times, the scree slopes were littered with fallen trees and pine needles.  There was also an area where snow had plugged up the stream, forcing it to tunnel through.

I find that I'm usually slowed down quite a bit on the scree part of the trail, but it still doesn't take too long to get to Thunder Lake.  Thunder Lake is much different from the other lakes on the trail.  It is very open, sort of round, and is a bright blue colour.

The trail continues part way down the lake before it ends.  This isn't one of the most spectacular hikes in Manning Park, but it is still a very enjoyable hike.  There is lots of interesting wildlife and vegetation, and the whole hike is sort of relaxing.  I've done this hike several times, and have enjoyed every single time.

You can find information about the hike here. 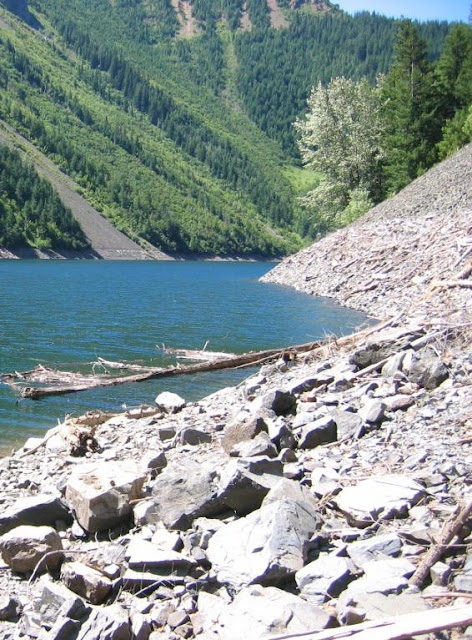