Why I Should Not Be Allowed to Take Shortcuts 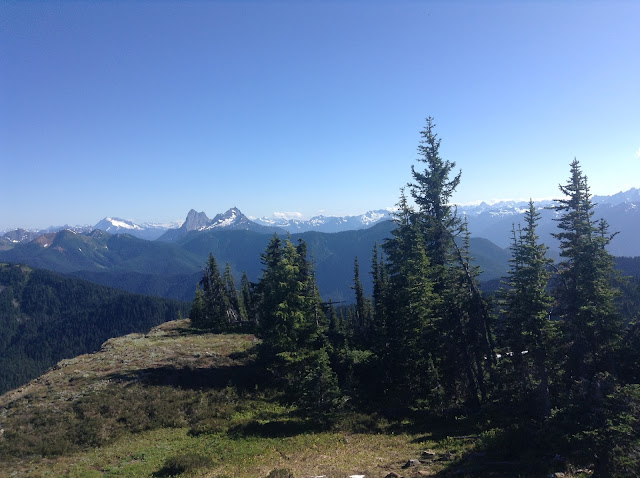 I’m not quite sure what possessed me to climb Porcupine Peak this past July.  I knew nothing about the peak other than that it was a point on a map of Manning Park.  Sitting on the western border of Manning Park, with an enclave of crown land and old mining claims to the east, it is an area that is seldom explored.  There are no trails leading to the summit.  There are almost no proper trails in the area at all actually.

Looking at a topographic map, I saw a ridge running south of the highway all the way to the summit.  It seemed like a pretty manageable route.  Despite not knowing if I’d get any kind of view at the top, or if there were any technical scrambles, I decided to give the climb a shot.  I left around 11 am, which was about as late in the day as I could get away with.


After parking at the nondescript pullout at Daynor Creek I was faced with my first challenge: not having any idea where to go to start the hike.  I knew I had to cross the highway and start going up somewhere, but I couldn’t see a logical spot to start.  It looked like a solid wall of bush along the south side of the highway.  I made my way down to Daynor Creek and started wandering up it, noticing that the ridge I was meant to be ascending was consistently packed with trees and bushes.  I realized there would be no easy thoroughfare up.  I was going to be bushwhacking for a few hours in the heat of the day.  What good fun.

After what felt like a few months of getting intimately acquainted with a variety of prickly and pokey plants, I came to a viewpoint of the highway and saw I had made almost no progress.  Checking my GPS, it seemed I had moved perhaps a millimeter or two on the screen. 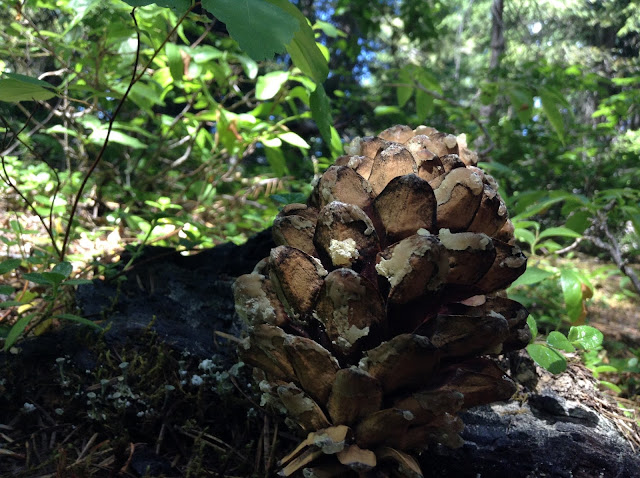 I continued onward and upward.  It took a lot of sweating and cursing, but eventually the bush thinned out a bit and I ended up on top of the ridge line.  I still had to follow it for several kilometres to make the summit, but it seemed like the hardest part of the day was over.  In excellent spirits, I celebrated with a cliff bar and juice box.  Normally I try to avoid extravagance, but I felt like I’d earned a proper feast. 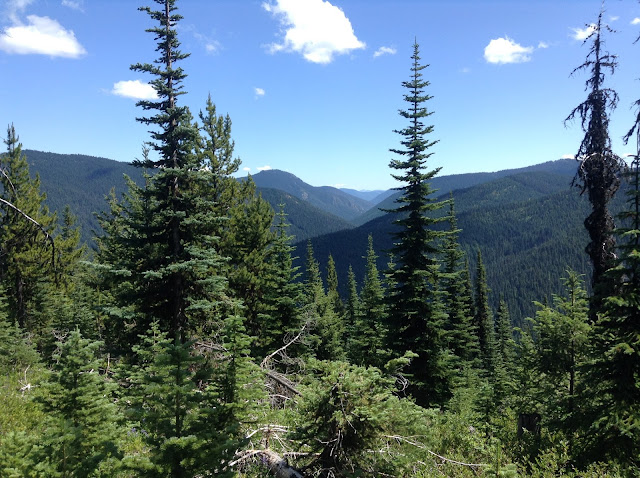 As I continued on, the vegetation got less and less dense, and I entered a sub alpine area with colourful flowers and scenic views in all directions.  I recognized a few familiar peaks, but a lot of what I was seeing felt new.  Even the familiar peaks were a bit tricky to recognize since I was seeing everything at a different angle than I was used to. 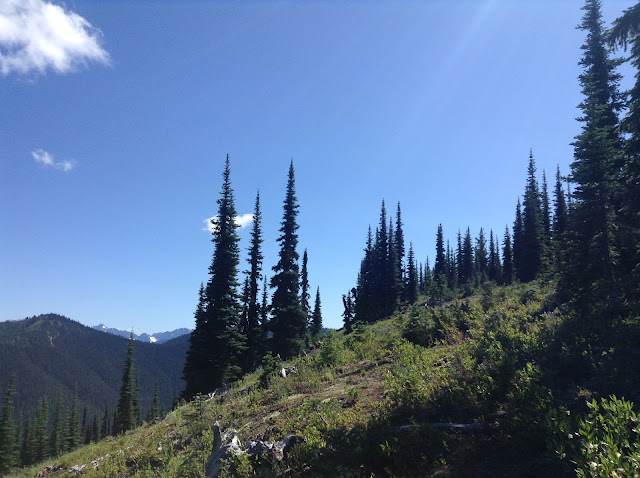 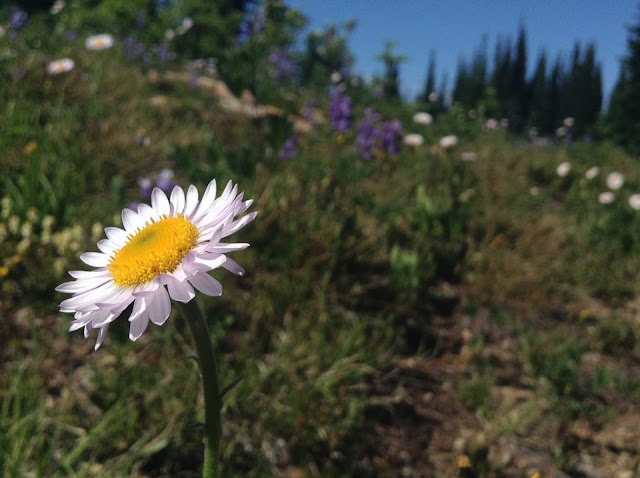 The heat was starting to wear on me a bit and I was going through more and more water.  I had brought two litres, with the plan being to drink one and a half on the way up and half a litre on the way down.  I wasn’t even a quarter of the way to the summit and I had finished the first litre.  I didn’t know if I would be able to fill up at all before I got back to my vehicle.  This made me a bit uneasy, so I resolved to try to be more conservative.

After some easy meadow hiking, the ridge dropped down to a gap and then went up a fairly steep ascent.  The rise up from the gap was covered in lots of little bushes and shrubs that made footing quite tricky.  This tough climb quickly destroyed my resolve to be more conservative with my water.  I would run out before the summit if there wasn’t a tarn or creek along the way.  I decided to take a chance that things would work out. 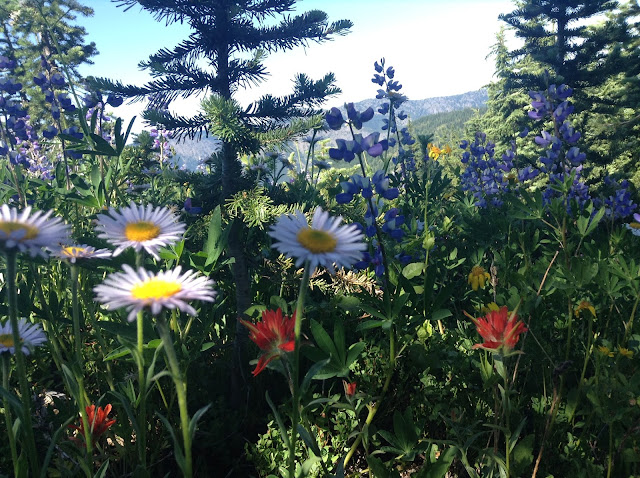 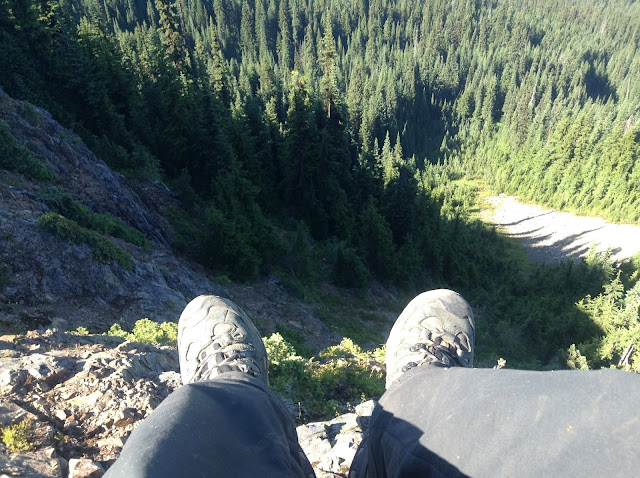 I pushed on and came to a few rocky outcrops that required a bit of scrambling to get over.  There wasn’t any serious exposure, but there was enough of a drop off on one to trigger the vertigo and adrenaline I love so dearly. 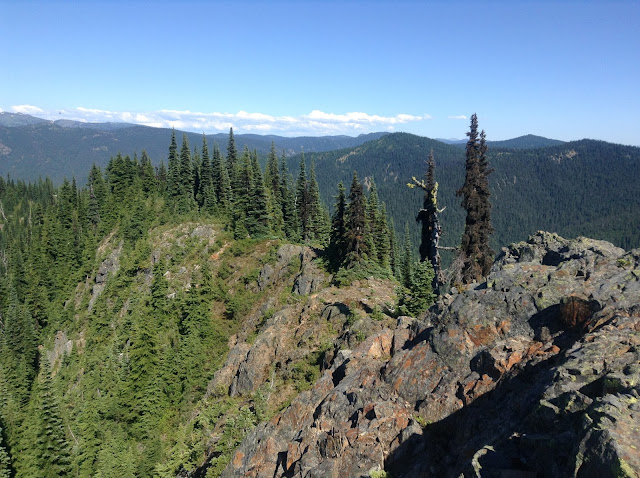 I kept coming to spots that looked like the final push to the summit.  My GPS consistently told me otherwise, but each time I assumed the GPS was malfunctioning and that I was almost there.  Each time, I’d get on top of the false summit and realize that it had been obscuring the rest of the ridge.  I’d look as far as I could see and assume the highest point was the peak, and then experience the let down again.  I don’t know why I kept falling for this.  Maybe it was the exhaustion and heat; maybe I’m just not that bright. 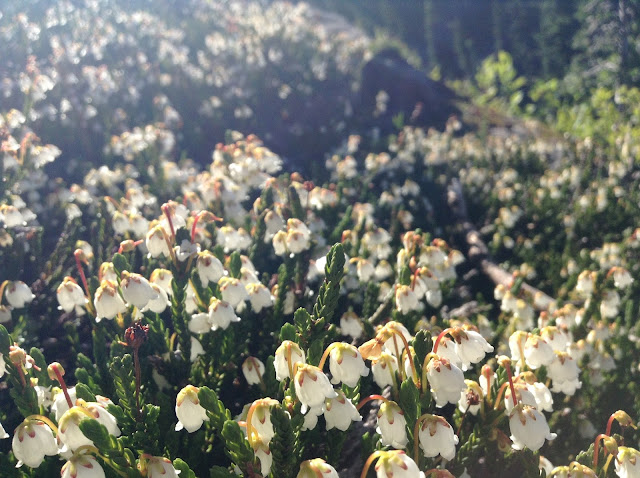 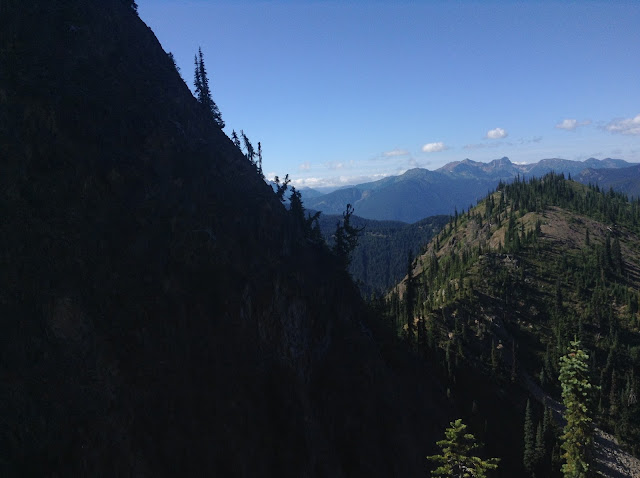 After following the rocky ridge line for a while, things opened up into a sub alpine meadow once more.  It was less strenuous hiking, but my energy levels were low, I was struggling to not chug all of my water in one go, the intense heat felt like a crushing weight, and I was beginning to wonder if Porcupine Peak actually existed.  I was getting very tempted to turn around. 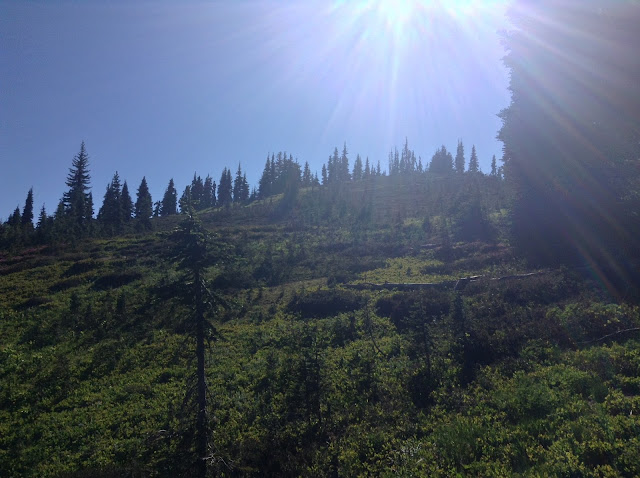 Then, I saw a bump in the distance that I confirmed on my GPS was definitely the peak.  It didn’t look impressive enough to be the summit, but I was learning to not question my GPS.  I saw a tarn feeding a fast flowing stream just below the final push.  That was a life saver, and I mean that quite literally.  I drank several bottles of water, took a joy-fueled nap, and then pushed on.


The view from the summit was worth it in every way possible.  Rugged mountains and green ridges could be found in every direction.  I could see almost nothing that showed any signs of human development or technology.  The highway was completely obscured.  I couldn’t see one man-made structure anywhere.  Most of the peaks I could see didn’t even have proper trails up them.  For three hundred and sixty degrees, I had what may well have been the same view people had a hundred years ago (minus a patch of burnt trees here and there, and one small topographical survey marker).  It felt like a truly timeless place. 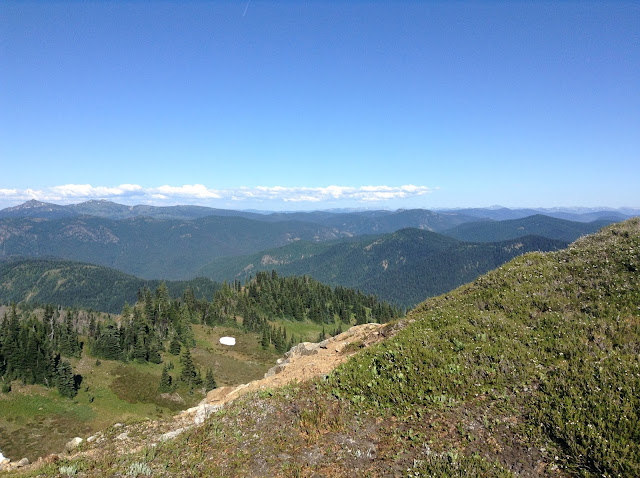 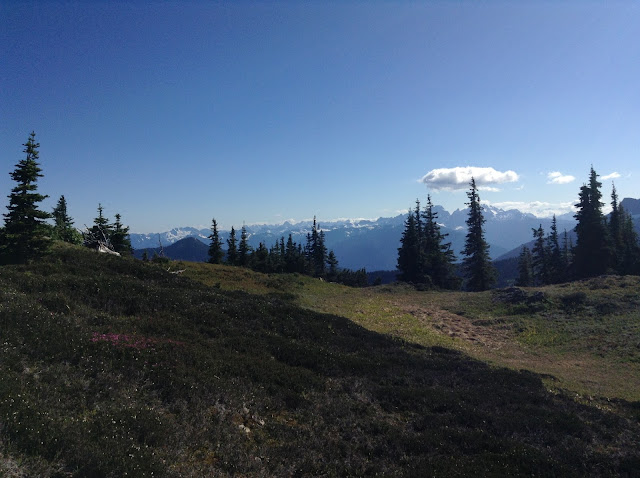 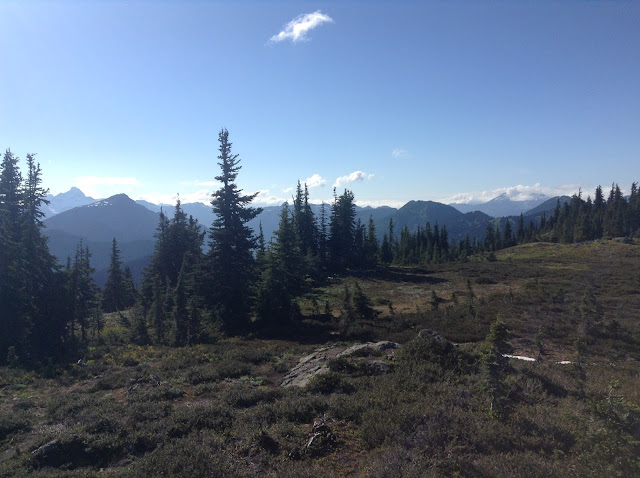 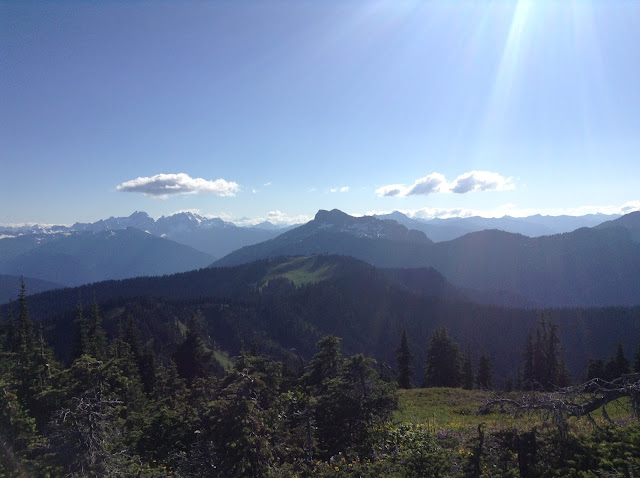 I drank in as much of the view as possible, and then looked at the clock on my iPod and promptly said “oh shit”.  It was much later than I had thought, and it was going to take a real push to get back to my vehicle before dark.

I stopped at the tarn to fill up my water bottles completely, and then started running down the ridge.  The thing about running is, aside from being a completely masochistic thing to put one’s self through, it makes navigating quite difficult.  As a result, I ended up turning off onto a sub ridge, and going about half a kilometre in the wrong direction.  I caught my error before I ended up getting properly lost, but it meant backtracking uphill for half a kilometre.  My attempt to save time had done the complete opposite.  I swore I would not repeat this mistake.

Checking the time when I was back on track, I realized it would be even tougher to be back before dark.  I wondered if I could save time by going around a spot where the ridge had a few rises and gaps.  I veered away from the top of the ridge, dropped down well below it, made excellent time bypassing all of the pesky ups and downs, and then promptly ran into a dead end of cliffs.  I frantically looked everywhere for a way around, but there was nothing.  I would have to turn around, backtrack, and climb back up to the top of the ridge.  Once again I had tried to save time, and ended up setting myself back significantly.  I swore I would not repeat this mistake. 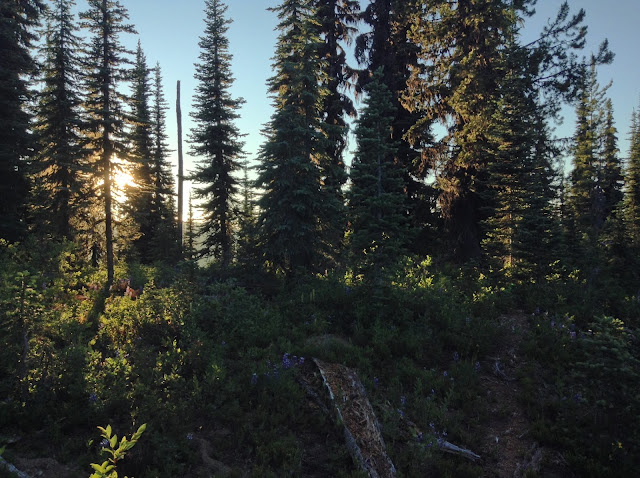 I got to the end of the ridge just as it was getting dark.  I put on my headlamp and got ready for the bushwhack down to the highway.  I had a GPS track of my route up, and it seemed like it would be dead simple to just follow that.  It would have been.  But I decided I could save time by just going straight down the bank.

After inadvertently going down the wrong bank and dead ending on a cliff, I backtracked and swore not to make that mistake again.  I dejectedly pulled out the GPS and tried to follow my track.

The thing about my GPS is, while it is great most of the time, it is not very good in thick forest.  Consequently, it kept reorienting the map as it tried to get a satellite connection and doing other fun, but not particularly helpful things.  At one point, I walked in a straight line for about ten metres and it showed that I had walked in a circle.  I backtracked, following my foot prints, and the GPS showed me veering off to the east.  It was basically useless at this point.  I put it in my pocket and tried to figure out how to get down without it.

Looking at my topographic map, it didn’t seem like it would be difficult to navigate the last kilometre or so down to the highway.  However, in the dark, surrounded by trees, with a dying headlamp, and with panic kicking in, it felt impossible.

I took a moment to think about all of my failed attempts to save time.  If I hadn’t wasted so much time, I would have had sunlight for the entire hike.  Getting to the highway would have been as easy as eating twelve chocolate bars (which was something I really wanted to do at that point).  I could faintly hear traffic on the highway, so I tried to orient myself off of that.  There was occasionally a gap in the trees where I could see the lights of cars zipping by on the highway below.  It wasn’t much, but it was enough to eventually come out to the highway (not before dead ending on one more cliff).  I drove home, lamented the fact that nothing was open that would sell food, and then slept for about 16 hours.

Despite some of the difficulties I had on the hike, it was probably one of my favourite hikes from this past summer.  It might have been nicer if things went a bit more smoothly, but then it wouldn’t have felt like an adventure, and I wouldn’t have properly appreciated the twelve chocolate bars that I ate the next day. 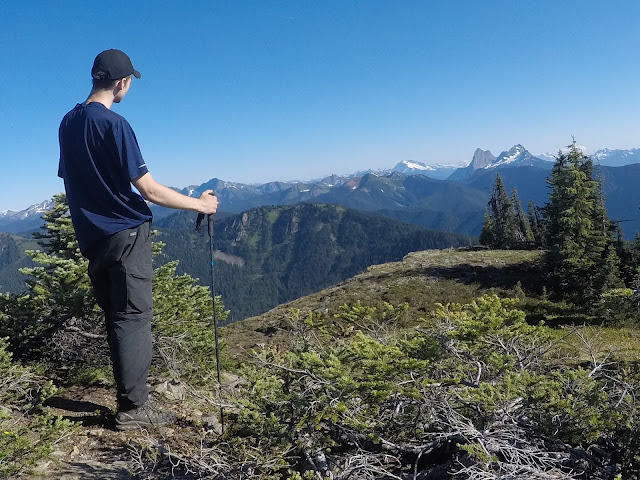 Posted by Clueless Hiker at 15:49 No comments: