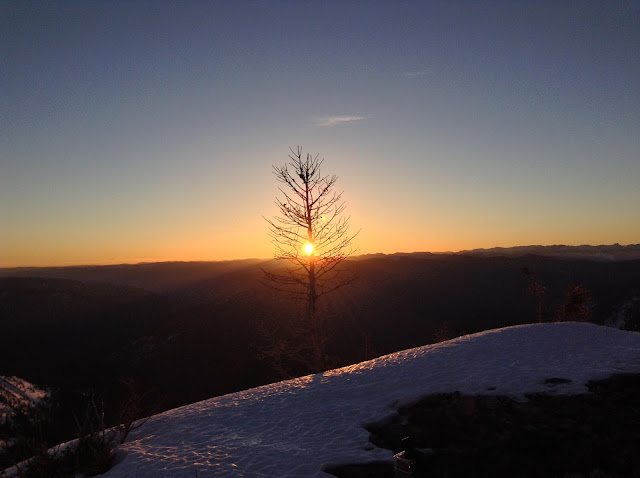 It’s amazing how quiet the woods are at night.  A light breeze can sound like a deafening gale.  Gentle rain sounds like a furious bombardment from above.  Hiking up the trail to Frosty Mountain in the middle of the night, all I could hear was the rhythmic crunch of my snowshoes breaking trail.

It was around 10:00 PM or so when I got on the trail.  With my headlamp, I could clearly make out my immediate surroundings, but not much else.  Lightning Lake, where the trail began, was nothing more than a dark, featureless shadow.

For the first couple of hours, it was fairly easy to follow the trail.  Someone had been up recently, and I could mostly keep myself in their tracks.  As I got higher and higher, into areas that had seen fresh snow recently, I began to lose the tracks. 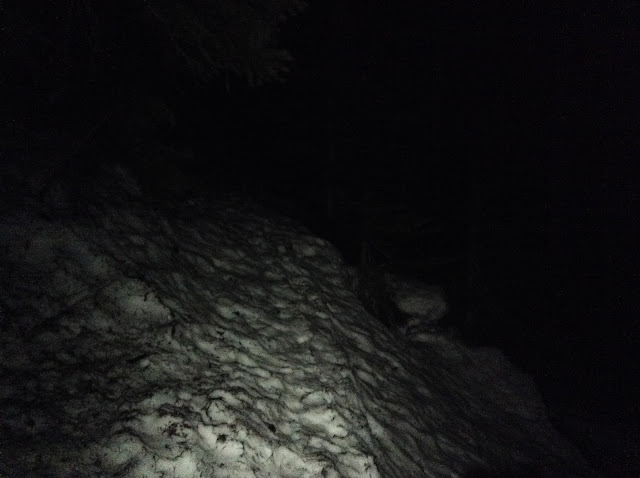 After a few hours of climbing, I completely lost the trail and could not pick it up again.  I realized that my two options were to either turn around, or to blindly trudge uphill in the optimistic hope that I would somehow end up at the Frosty Mountain Camp.

I took out my GPS, which got a fairly strong signal.  Unfortunately, I had neglected to put a map of Manning Park on it.  Actually, the last map I had put on it was of New Zealand, from a trip a year and a half ago.

I put the GPS away and continued walking up.  Not knowing where I was, time seemed to stand still.  I would hike for what felt like hours, then check my clock and see five minutes had gone by.  I had no idea how close I was to the campsite.  For all I knew, I was veering in the wrong direction.

On two occasions, I sat down in the snow and thought about turning around.  Both times, I got up and continued, certain that I was foolishly walking into some kind of disaster.

Eventually, I got on top of a ridge, and was able to find clear tracks.  The trail meandered through the woods to the campsite.  Even in the dark, it was a sight for sore eyes.  From the campsite, I was confident I knew how to get to the summit of Frosty, whether there were tracks or not.

After a short break, I continued climbing.  Before long, I was in a grove of ancient alpine Larch trees.  I had walked through this grove many times before, but never quite like this.  Seeing the silhouettes of mountain peaks around me, with the grove and trees illuminated by the full moon, was like something out of a dream.  I no longer needed my headlamp, so I turned it off and navigated by the moonlight.

As I got closer and closer to the summit of Frosty, it began looking less like a silhouette and more like an imposing tower looming ahead of me.

Then the wind picked up, cutting through every layer I had and chilling me to the bone.  Distracted by the bite of the wind, and in awe of the landscape around me, I nearly went over a steep drop off.  After that, I made a point of stopping every few steps to make sure I wasn’t unknowingly standing on a cliff.

As I began the ascent to the top of Frosty, the moon moved directly behind the summit, giving the mountain an eerie glow.  The edges of the mountain were illuminated, their features clear.  The middle of the peak was still basked in darkness.

I got most of the way up the final scramble when I began to have serious doubts about my ability to get to the top.  I could see the wooden post signifying the junction where the trail up the other side of the mountain met this one.  I was likely less than five minutes away from that point.  But the combination of snow and rock was beginning to become quite dangerous.  The patches of rock were not passable wearing snowshoes, and the patches of snow were not passable with snowshoes.  In the dark, it was too dangerous for my liking.  I stopped my progress and moved across to what looked like a nice viewpoint, just below the top of the mountain.

When the sun did sneak out over the horizon, it was unlike anything I had ever seen.  Every doubt I might have had was immediately squashed the second I saw the orange glow in the distance. 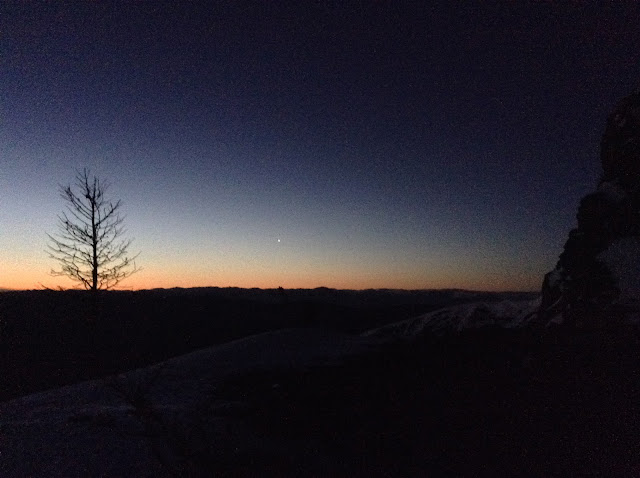 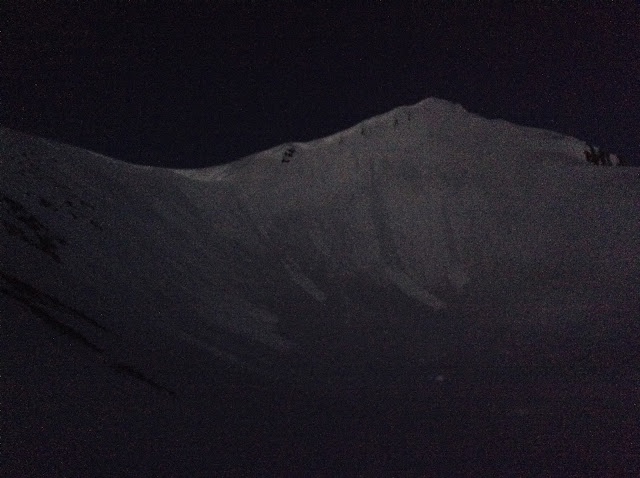 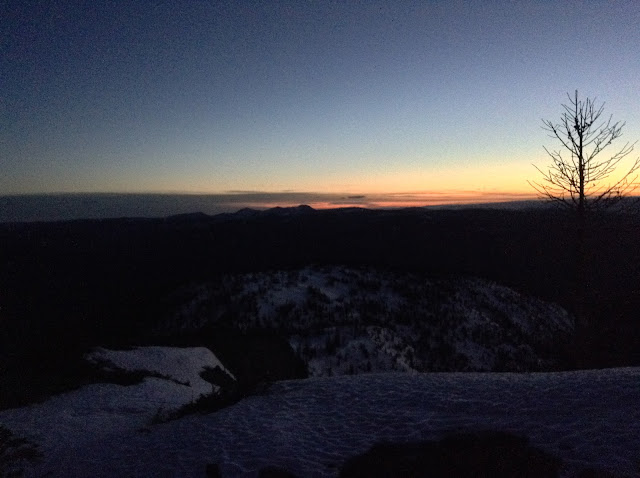 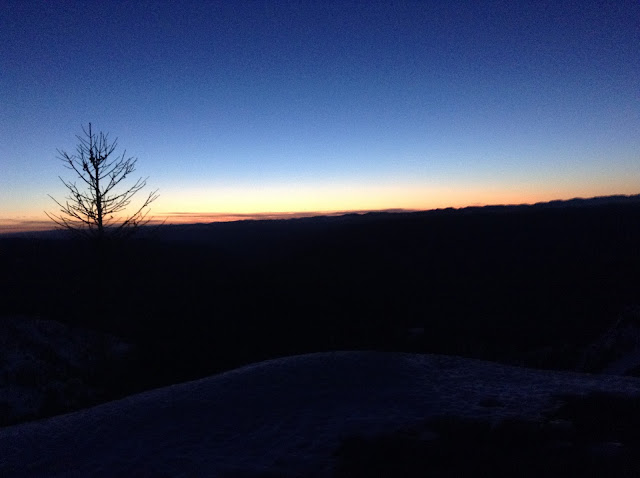 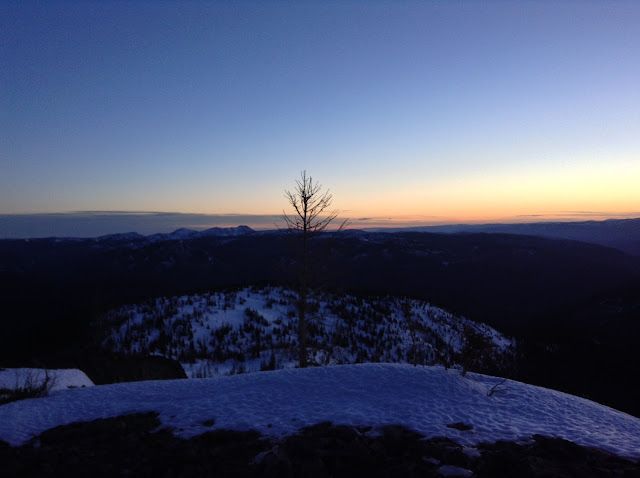 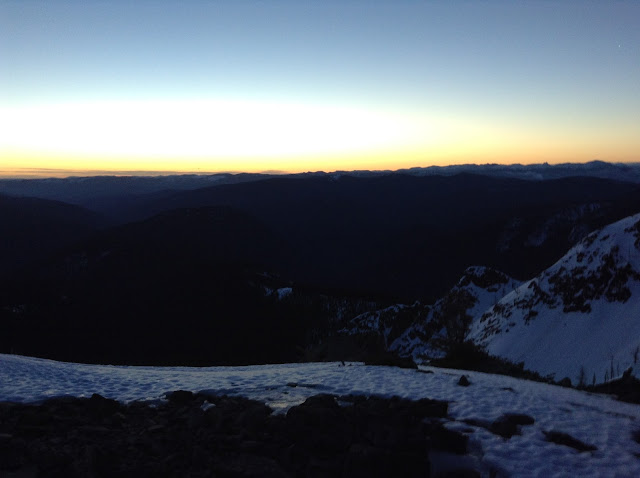 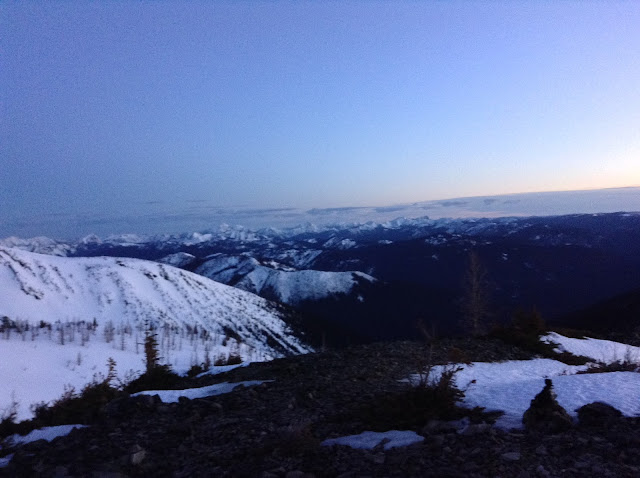 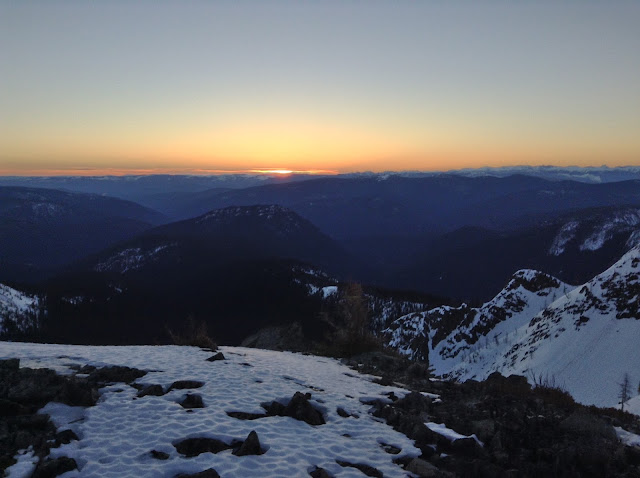 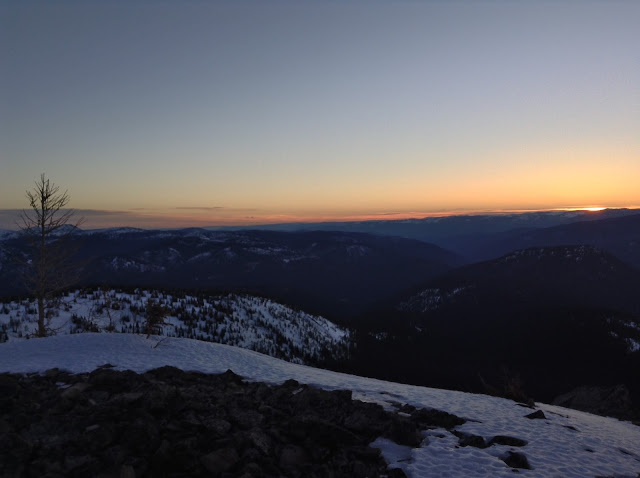 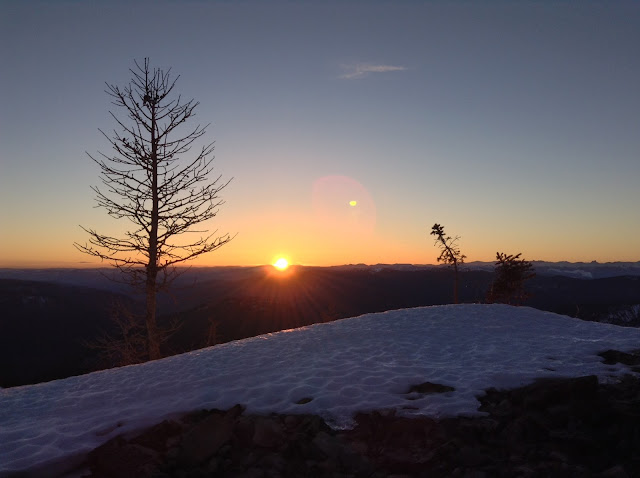 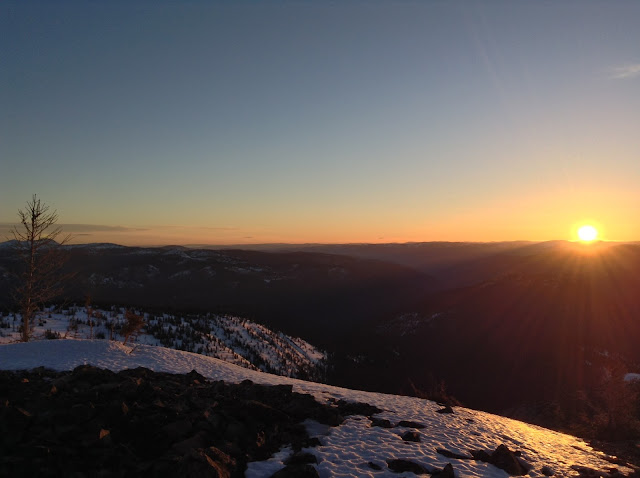 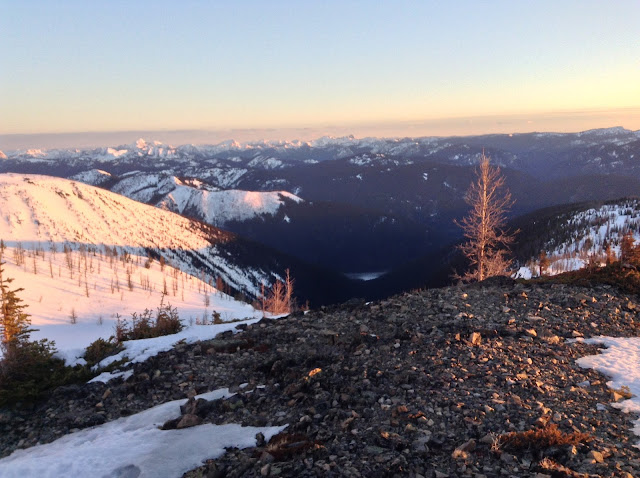 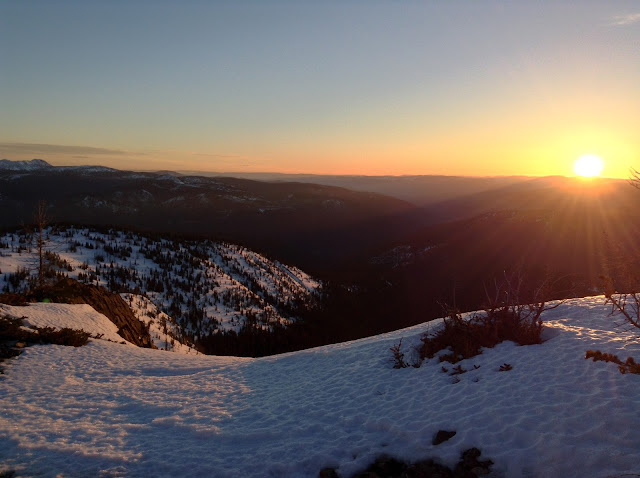 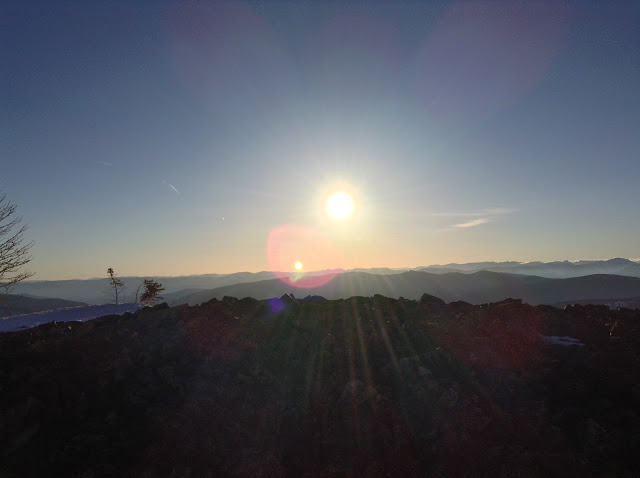 When the show was over, I turned around and began following my tracks down the mountain. 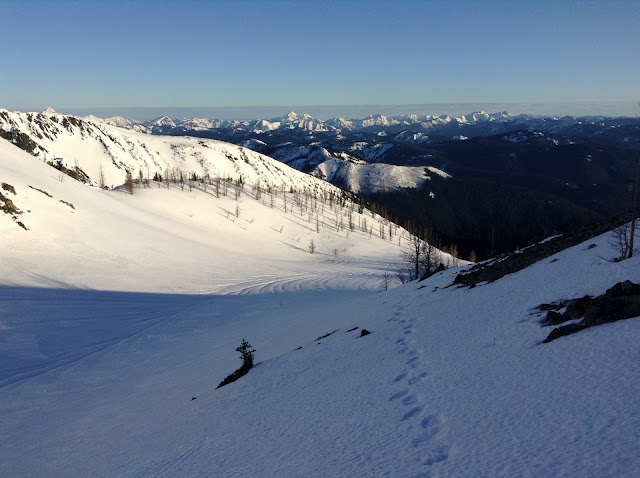 The larch grove was spectacular in the early morning sun.  Despite the amazing sight I had seen from the (almost) top of the mountain, I still found myself taking pictures constantly. 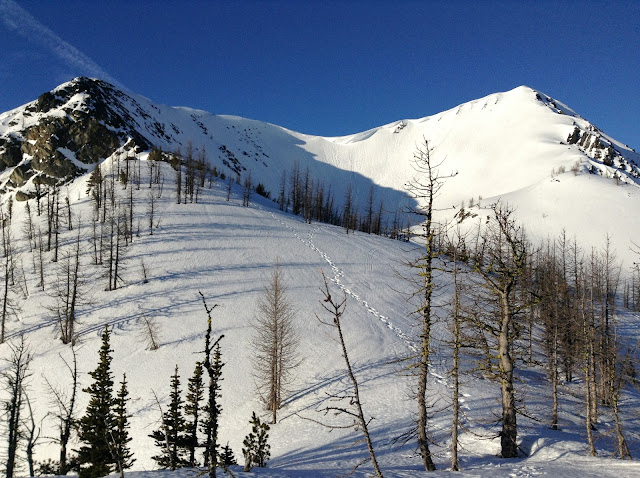 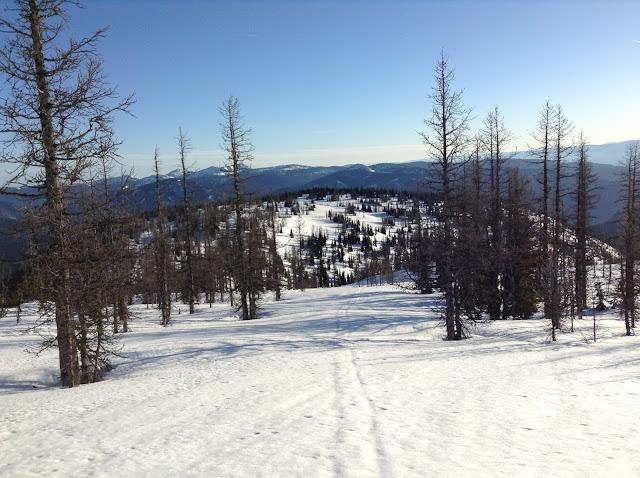 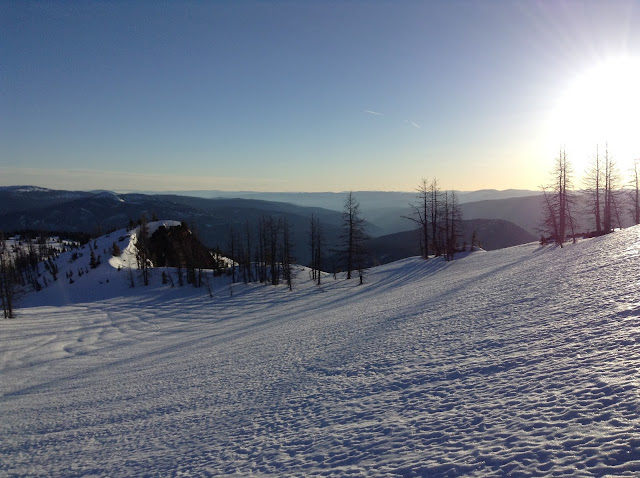 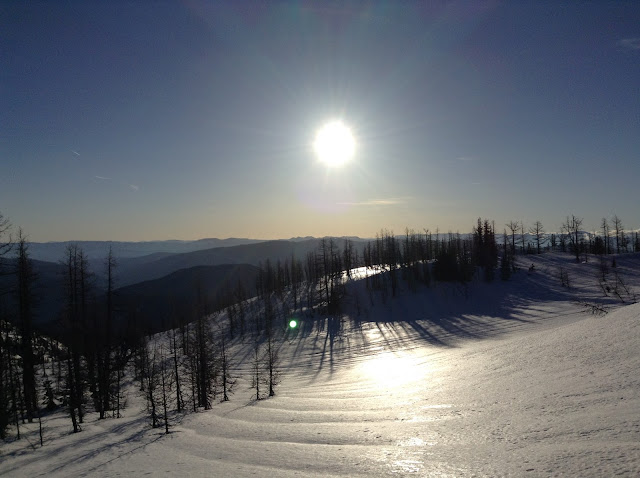 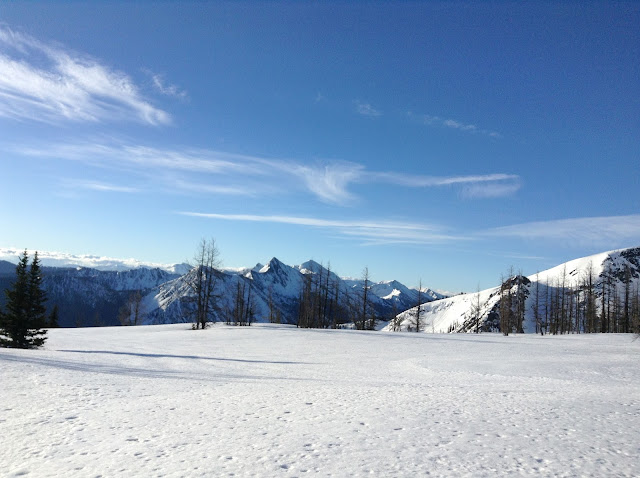 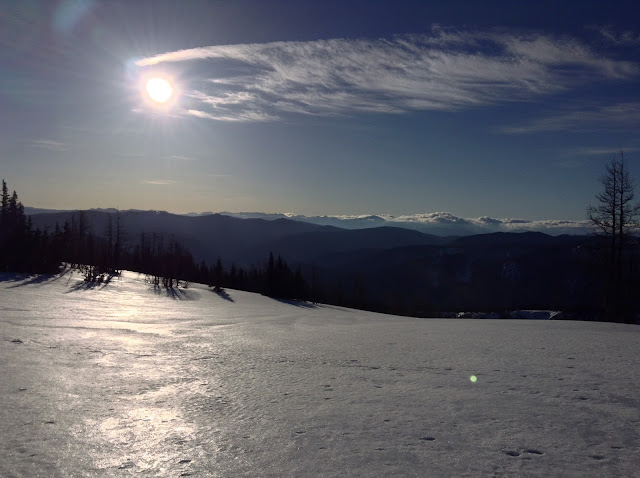 It took less than an hour to get to the campsite, the good time courtesy of an unintentional shortcut or two.  I had another quick break, noting that my legs were beginning to cramp up. 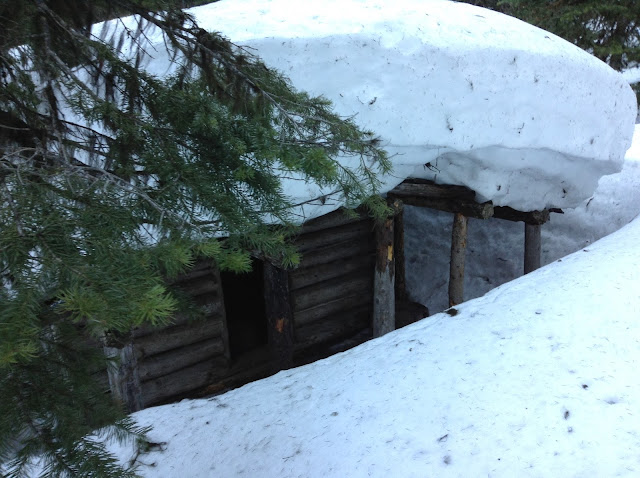 From the campsite, I followed the trail to the point where I had joined it on the top of the ridge.  I could either try to follow the trail, which had been quite difficult at night, or I could try to follow my own tracks.  I elected to follow my tracks.

I lost my tracks after about five minutes.  In my exhausted state, I decided to just keep hiking down, rather than turn around.  This proved to be terrible decision making.  I kept coming to steep drops, forcing me to move laterally until the terrain became gentler.

I eventually found the trail again, and vowed to not let it leave my sight until I was at the parking lot.  Then I decided to take another shortcut.  The cliff that I came out to at least had a scenic view. 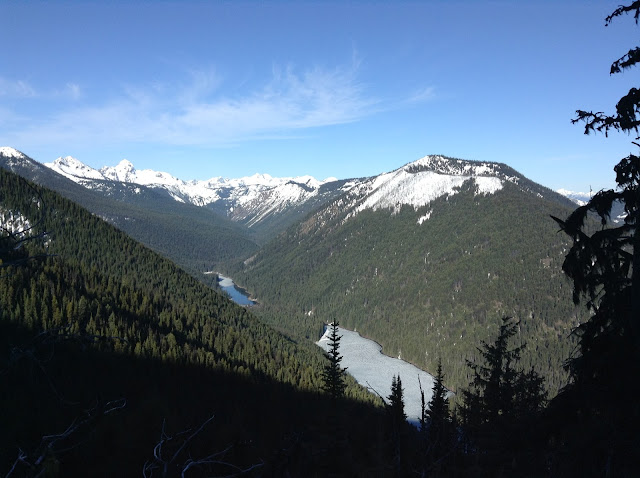 I backtracked to the trail, effectively rendering my “shortcut” pointless.  I got back to the parking lot in one piece, which, at times on the hike, had seemed like a very unrealistic fantasy.

Somehow, I had overcome the elements, fatigue, and my greatest enemy: my decision making on no sleep and no coffee.

Time Lapse of the Sunrise

Email ThisBlogThis!Share to TwitterShare to FacebookShare to Pinterest
Labels: bc, canada, manning park