In early August of this year, my Dad and I did a three-day backpacking trip in Garibaldi Provincial Park.  My Dad had climbed Black Tusk and Panorama Ridge 45 years ago, and what he told me about that hike really piqued my interest in visiting the area.  I looked up pictures of the park online, and was immediately heartset on hiking there.  We had planned to do the hike last year, but the weather didn’t work out on the days I had taken off work, so we ended up delaying the trip by a year.  Fortunately, we got perfect weather this year.

Given that I had limited time off, we decided to get up early and drive to the trailhead, and then hike into the campground all in one day.  This meant doing 8 kilometres of very strenuous hiking after a long drive.

When we got to the parking lot, there was a sign saying that the Taylor Meadows and Garibaldi Lake campgrounds were full, and to camp elsewhere.  This was very frustrating, as these were the only two places we could camp and still have access to the two hikes we wanted to do.  The parking lot was overflowing onto the road, so it wasn’t that unbelievable that there would be no campsites.  We debated getting a hotel in Squamish and trying our luck the next day, but we eventually decided to hike in and try to find a spot in the overflow camping at Taylor Meadows.  I just didn’t have enough time off work for us to not hike that day.  It was partially bad planning on my part that caused this conundrum, as I had requested time off in the middle of a long weekend.


We started on the trail, which shot seemingly straight up.  The trail was relentless, staying quite steep the whole time.  Many people were hiking the trail in both directions, though the trail was fairly wide, which made getting by people easy.  The crowds did get me nervous that there would not be room for us in the overflow camping. 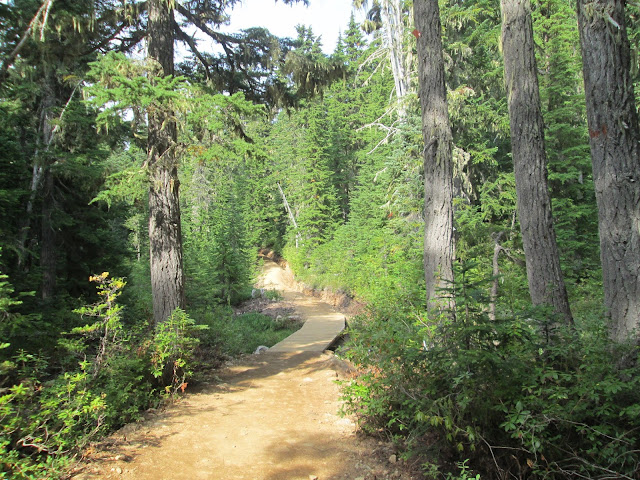 For the first bit of the hike, we seemed to be able to make it about three-quarters of an hour without needing a break.  As we hiked farther and farther, the time between breaks shortened more and more, until we were stopping to catch our breath every ten to fifteen minutes.  I felt my legs getting sore and I was a little worried that I would have difficulty on the hikes that we were going to be doing in the core area of the park.

After much tough slogging, we got to the junction of the Taylor Meadows trail and the Garibaldi Lake trail.  We turned onto the Taylor Meadows trail, thinking it would level out and become less strenuous, but it kept chugging up at the same rate as before.  This was very disappointing, but we knew we were close.  I was very stressed out at the prospect of not having a place to camp after all the effort we had put out on this hike.  My Dad did his best to calm me down, but I knew I wouldn’t be relaxed until we had somewhere to camp.

After what felt like a journey to Mordor and back, we were at the Taylor Meadows campground.  We headed towards the overflow camping, and as we had expected, every campsite we passed was occupied.  Then, to our surprise, we came to two vacant sites.  This was very fortunate, as we had two tents, so even one open spot wouldn’t have worked (the campsites were tent platforms that were two small to fit both our tents on).  I immediately started getting my tent out, not wanting someone else to come by and steal this spot.  My Dad explored around a bit to see if there were any better options, but in the end we settled on the first two spots we saw.

My Dad’s tent platform was a little dilapidated and required a bit of work before it was usable, but otherwise our sites were perfect.  I explored the Taylor Meadows area a bit and was quite excited to see a glimpse of Black Tusk.  I was really looking forward to climbing it the next day.

The next morning, I woke up freezing cold.  According to my thermometer, it was almost at freezing.  I was surprised that it got this cold in the middle of the summer, but we were at a fairly high elevation, so I guess I should have expected it.

We groggily got up and after a quick breakfast, we started on the trail up Black Tusk, the remnant of an extinct andesitic stratovolcano. 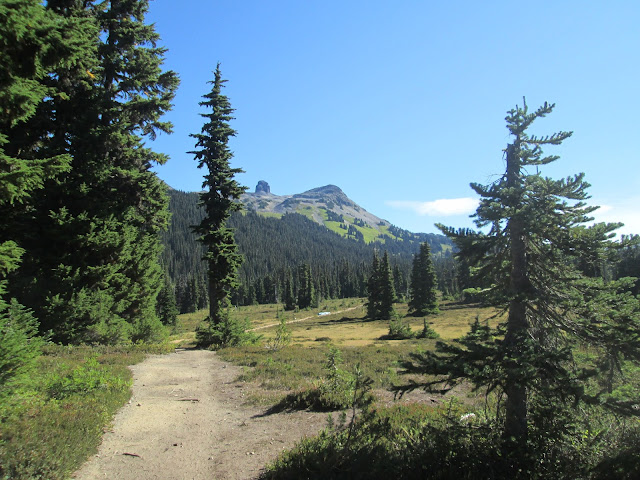 The first bit of trail was reasonably level and easy.  The work didn’t truly begin until we reached the junction where the Panorama Ridge trail took off.  I don’t know if the trail got as steep as the trail into the park, but it sure felt like it.  It was a little more relenting though, as there were some short sections that were a little less steep.

Much of the hike was out of the trees and very exposed.  It was still fairly early in the morning, but we knew that it would be very taxing to be hiking here once it started to warm up. 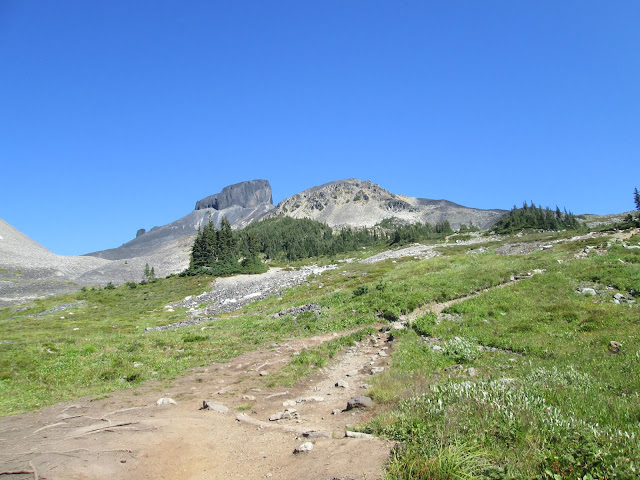 We came to the area where the official Black Tusk trail ended.  An unofficial, but well-trodden route continued to the top.  We followed along this route, and soon we were contending with a frustrating amount of loose rock.  It started to take three times as much effort as before to take a single footstep.  This was easily the toughest part of our whole trip.  We slowed to a snail’s pace as we crawled up the mountain, and even though it had warmed up, I was forced into wearing all my layers as a result of the fierce wind.

We got to the base of the peak and took a break.  A spectacular view opened up all around us.  We could see the snowy and jagged peaks of the Garibaldi Mountains, the surreal turquoise waters of Garibaldi Lake, and of course, the distinct looking pinnacle of Black Tusk.

A dodgy route continued around the base of the peak to a “chimney”, where supposedly it was possible to get on the very top of Black Tusk.  Both of us started on the route, but I turned around after feeling the route was a little unsafe.  My Dad continued to the chimney, but elected not to go up it due to the volume of people climbing it (only one person can go up or down it at a time, so a person could wait a while for their turn).  He did go up it, however, when he was in the park 45 years ago, so it has already been crossed off his bucket list.  I still have to get the gumption to do it at some point in my lifetime. 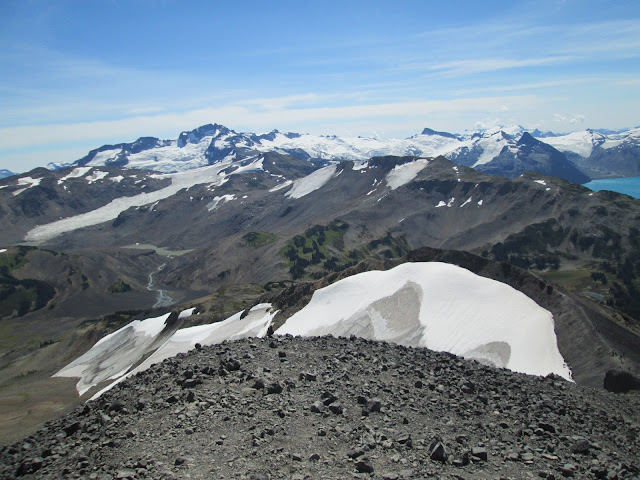 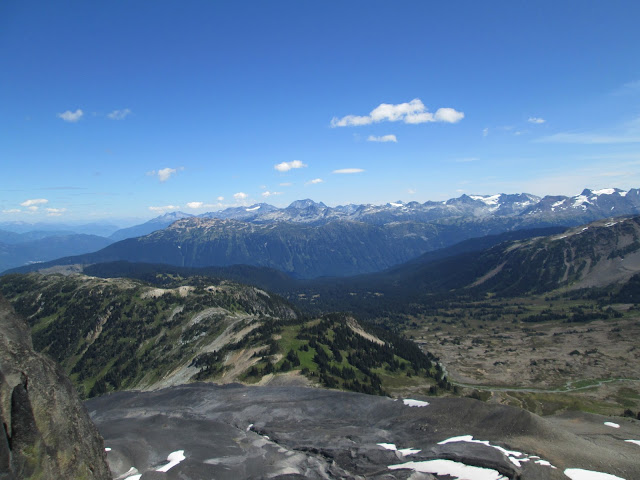 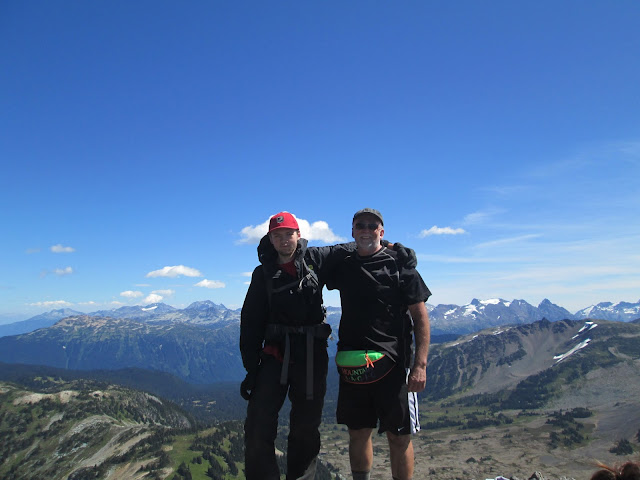 We soon were going down the trail.  It got pretty hot, but not as hot as I had expected.  The hike down was pretty easy, and soon we were at the junction where the trail to Garibaldi Lake split off.  We decided to hike to Garibaldi Lake before returning to our campsite, as we had a lot of time left, and we wanted to see the lake up close. 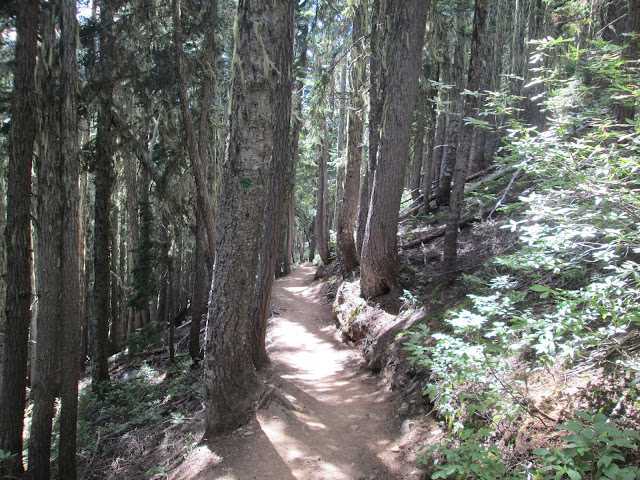 The trail to Garibaldi Lake was fairly easy, venturing back into a densely wooded area.  We started seeing more and more people, until we were at the lake, which felt like a mall on Black Friday.  There were so many people that my mind was kind of blown.  Part of it was likely because it was the Monday of a long weekend, but it was still way more people than I expected to see.

The lake was pretty neat to see up close, but it wasn’t a very pleasant place to spend a lot of time just due to the crowds.  I would love to return and spend more time at the lake in the shoulder season.  It would definitely be a nicer place to camp than Taylor Meadows.


We returned to our campsite at Taylor Meadows and started planning our next couple of days.  We had originally planned to hike Panorama Ridge the next day, and then hike out the day after that, but seeing how little there was to do with so much time left in the day (given how short the hike was), we decided to combine our final two days of hiking into one day.  This would mean getting up ridiculously early, hiking up Panorama Ridge, hiking back to our campsite, packing up our tents, and then hiking to the parking lot.  This promised to be a full day, but we decided to do it.  Because of this, I went to bed very early, wanting to be well rested for our last day in the park.

You can read about our last day in the park here.
Posted by Clueless Hiker at 21:33