Our focus for the next couple of days shifted to the northern part of Cortes Island.  On our sixth day on the islands, Dave and I ventured into Ha’thayim (Von Donop) Marine Provincial Park, while my dad had decided to take the day off.  Ha’thayim is a very rugged and undeveloped park.  It features some stunning old-growth trees, as well as access to inlets, lagoons, and bays.

Our goal for the day was to climb up Cliff Peak, the highest mountain on Cortes Island.

We began on the trail to Von Donop Inlet.  The trail to the inlet was very well maintained and easy to navigate.

We soon arrived at the inlet and took a little break.  It was a very pleasant location.  We spotted a number of boats in the water while we were stopped.  I’d imagine it is a popular location for kayaking. 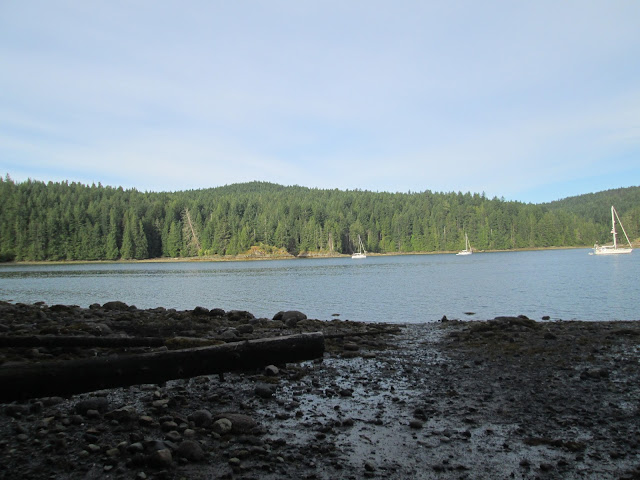 We continued hiking north, coming to a spur trail to a lagoon.  Not being particularly pressed for time, we took this trail.  The lagoon made for a nice rest spot, and offered us a view of Cliff Peak.

After stopping for a while, we headed back to the main trail and kept heading north.  We began encountering more deadfall across the trail, but the trail was still pretty hikeable.  We encountered a number of dried-up creeks, another sign of the dry year we had been having.

As we continued, we saw wolf tracks in mud, as well as some wolf scat.  We knew this area contained a number of wolves and it was a bit of a concern for us.

The trail began to get more and more overgrown, until it our progress slowed to what had to be less than 1 km/h.  We fought through tightly packed trees, and I know I took many branches to the face along the way.  The trail became more of a concept than a concrete thing, and we soon began talking about turning around.

After reaching one particularly bad section, we both agreed to turn around.  We figured that a chainsaw would be necessary to hike Cliff Peak.

On our way back, we took another spur trail to Mud Bay.  I saw a few places here that looked ideal for camping.  When I eventually return to Cortes Island, I fully intend to camp somewhere in this park.

We continued heading back on the main trail and decided to take one more spur trail.  We thought it went to the village at Squirrel Cove, but it ended up just going to a fishing cabin on the shoreline of the cove, cut off from the village by a headland.

We continued back to the parking lot and then drove back to Gorge Harbour.  I used the pool and hot tub, which felt great after all of the hiking.  Later that evening, we ate at the Gorge Harbour Marina’s Floathouse Restaurant, which was excellent.

The next day, we headed to the Children’s Forest, which is a project to buy a large chunk of land from Island Timberlands for the benefit of the children of Cortes Island. 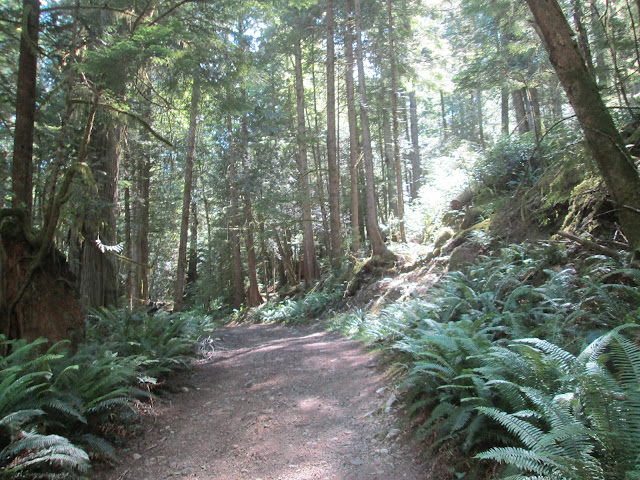 Not long after starting the hike in, we came across a dilapidated old car.  Interestingly, this would be the theme of the day, as we would run into another two similarly worn-down cars.

We turned onto the Rave-on Trail (named after the annual rave held at Carrington Lagoon) and followed it to Grandmother Grove.  After a bit of hiking, we came to a picturesque little field.  Not long after that, we were at Blue Jay Lake.

We started heading back, taking a side trail along the way.  The trail went outside of the mapped area of the forest, and ended up climbing up to an area that had clearly been logged. 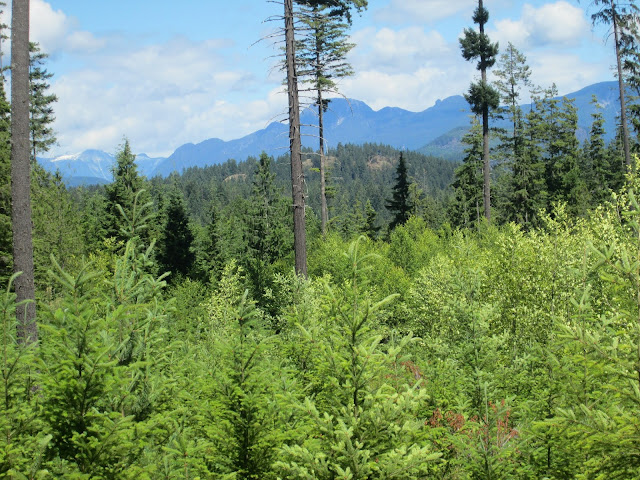 We headed back and returned to the parking lot, where we grabbed our camping gear.  We were going to be hiking into Carrington Lagoon and spending the night, and hadn’t wanted to carry our camping gear with us all day.

After loading up, we headed back into the forest. 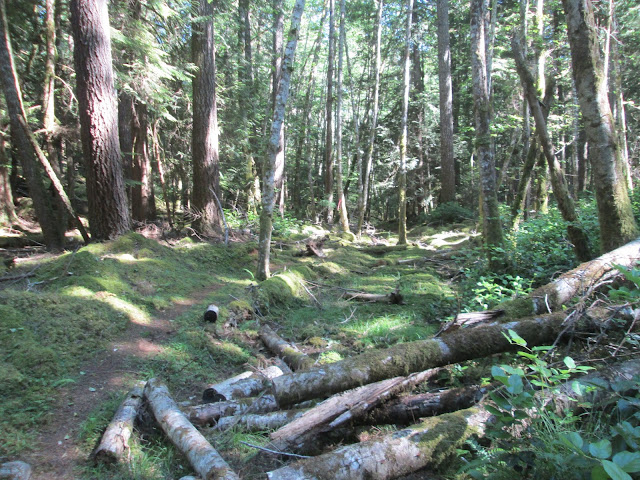 We soon came out to Carrington Lagoon.  It was easily my favourite spot on Cortes Island.  Being in this place felt like walking around inside a post card.

We picked our camping spots and began setting up.  I was on an exposed ridge and there was a fierce wind blowing.  Setting up my tent was extremely difficult, but fortunately, Dave and my Dad were willing to help me.

I would go as far as to say that the camp-site I had that night was my favourite camp site that I have ever had.

The next day we got up and packed up, ready to hike out of the forest.  To finish our goal of hiking all of the trails in the forest, we turned onto the James Creek Trail.  We followed it for a while before crossing an old logging road.  All three of us missed the fact that this road was the trail we were supposed to turn onto to go to the parking lot.  We ended up staying on the trail we were on.  We kept going for what felt like ages, slowly coming to the realization that we had missed our trail.  We came out at a residence, confirming that we had messed up.  Refusing to backtrack, we stayed on the trail, even as it turned into a road.  Eventually we came out into an area we recognized, realizing that we were a few kilometres from the parking lot.

We ended up missing the ferry to Quadra Island that we had intended to take, but we did make the next one.  It was certainly an interesting way to cap off our time on Cortes Island.  I don’t think any vacation is complete without getting lost at least once.
Posted by Clueless Hiker at 15:49