In early June, I took a 10-day trip to Quadra and Cortes Islands with my Dad and my friend Dave.  It was my Dad’s and my first time on both islands.  Dave had been to both islands numerous times, and he was the one who really encouraged me to go there.  Being such an expert on the islands, Dave planned out pretty much everything for the trip, ensuring that we were able to take in the best that the islands had to offer.

A recurring theme throughout the trip was the occurrence of unusually dry conditions for this time of year, due to two winters of low precipitation and the beginning of a second summer of unusually high temperatures.  Dave frequently pointed to ponds that had evaporated or were evaporating ahead of schedule, as well as vernal streams that had already run dry and year-round creeks with low water levels.  He noted that this did not bode well for the coming wildfire season in British Columbia, which was already far ahead of the usual schedule.

The first day of our trip involved driving from Princeton to Victoria.  We managed to get an earlier ferry than anticipated, and so we had more time than expected to spend with my sister and her family in Victoria.

The next day, my Dad and I picked up Dave and began the drive to Campbell River.  After stopping to grab a bite to eat in Campbell River, we got on the short ferry to Quadra Island.

I had never been on a ferry this small before.  It had only one vehicle deck and was finished loading in a few minutes.

I checked out the outside passenger deck of the ferry.  It was pretty windy, so after a minute or two, I went back inside.


In what felt like no time at all, we arrived at Quathiaski Cove on Quadra Island.  We got off the ferry and headed for the Quadra Farmers Market.  It was an interesting market.  The highlight for me was the stand with the Salmonberry Butter.  After sampling some, I knew I had no choice but to buy some.  It was quite delicious.

After the market, we went to the Kay Dubois Trail.  Named after a local resident, the trail is near the southern end of Quadra Island, along the east side.


The trail was a reasonably easy meander through the woods, just tucked away from the shoreline.  The trail had numerous beach accesses.  We stopped at one and took a short break, enjoying the scenery.

Early on the trail, there was a bizarre and surreal Sitka Spruce.  The way the branches of the tree jutted out gave it an almost spider-like appearance.  There was something eerie and magical about this tree.  I’m inclined to think that it may be related to the Whomping Willow from Harry Potter.

The trail took us only a couple of hours to do, and soon we were back at the jeep, heading towards Rebecca Spit.  We were going to be camping at the We Wai Kai Campsite, which is located near the spit.

After getting our tents set up, we headed to Rebecca Spit to do the trail around it.  A grassy area on the spit was the site of a battle between two Aboriginal peoples, during which it changed hands from the Coast Salish to the Kwakwaka’wakw.  There were visible mounds on the sides of the area that the Natives built for defensive purposes.  I found it kind of interesting that such a peaceful and pleasant place was the location of such violence.

The trail around the spit went through a forest of almost exclusively Douglas firs.  One section had experienced a fire about ten years ago, but was in the process of recovering.

After finishing our hike on Rebecca Spit, we went to the Heriot Bay Inn Pub, where there was some live music.  It was pretty good entertainment.  At one point, two guys got on stage, with one playing blues music and the other doing freestyle rap over it.  I’m not a huge fan of either music style, but hearing the two together was actually really quite enjoyable.  Perhaps they’ve stumbled onto a new sub-genre of music.

The next day we headed to Granite Bay, on the northern end of the island, to do the hike to Newton Lake, Small Inlet, and Waiatt Bay.  The trail was originally a logging road, but the forest has since taken it back to the point that it seems like a normal trail now.

The first section of trail was pretty easy, going through the woods and by a few small lakes.  We were soon at Newton Lake.  We took a short break on a swimming rock before continuing on.

The trail to Small Inlet was quite a bit more strenuous, descending very steeply.  I was not looking forward to coming back up it, especially given the hot weather.  The last several hundred meters of the trail to Small Inlet are in a low-lying, marshy area that crosses the creek that drains Newton Lake and flows into Small Inlet; however, the dry conditions of this year meant that the usually wet and muddy trail was dry and easy to hike.

After Small Inlet, we continued on to Waiatt Bay, which was the site of an Aboriginal village.  The Aboriginals of Waiatt Bay cleared and tended clam beds.  Evidence of this is still visible today, in the form of a midden.
We took a lunch break at Waiatt Bay.  My lunch was one of those flavoured cans of tuna (basically cat food) and crackers.  As I was eating, I was harassed by some very aggressive wasps.  One even flew into my can of tuna and appeared to die.  Then again, maybe it was taking a nap.  I don’t know.  All I know is that I didn’t really want to eat any more of my tuna after that.

After lunch we started heading back to Granite Bay.  As I had anticipated, the climb from Small Inlet to Newton Lake was horrible in the intense heat.  Once we got back to the swimming rock at Newton Lake I felt I had no choice but to jump in the lake.  It was quite chilly, but it felt nice after working up such a sweat.

After returning to the jeep, we headed to the parking lot for the hike up Chinese Mountain.  We were going to be climbing the south peak, which seemed kind of daunting after already having done a fairly lengthy hike.

Chinese Mountain, with its granite basalt cliffs, is quite popular for rock climbing.  Rock climbing disagrees with my acrophobia, so I was more than happy just to be hiking.

The climb was short, but extremely intense.  There were one or two places where the footing was a little tricky, and I had to use my poles to save myself from falling on my face on one occasion.


I was pretty drained by the time we got to the top, but the view was worth the effort.  We were rewarded with a view of Campbell River, Rebecca Spit, and the mountains of Vancouver Island and the mainland.  I took many pictures and vowed to return to this place next time I visit Quadra Island. 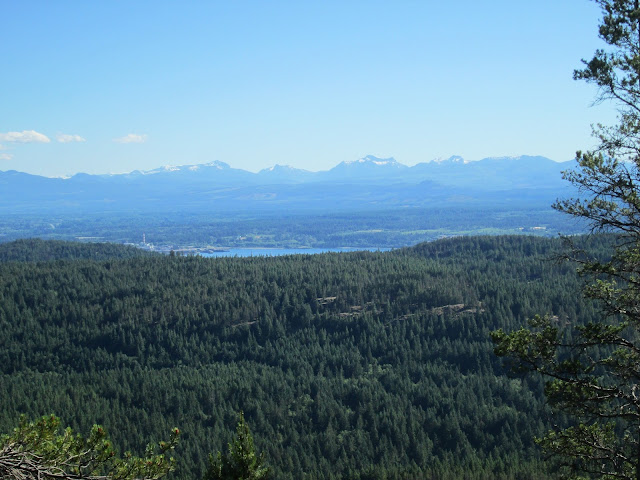 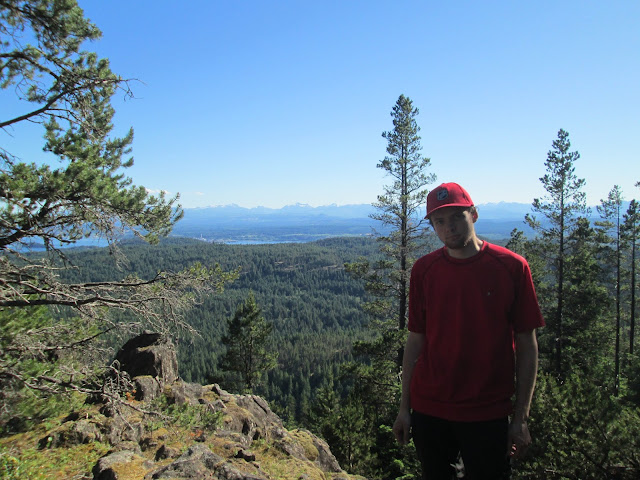 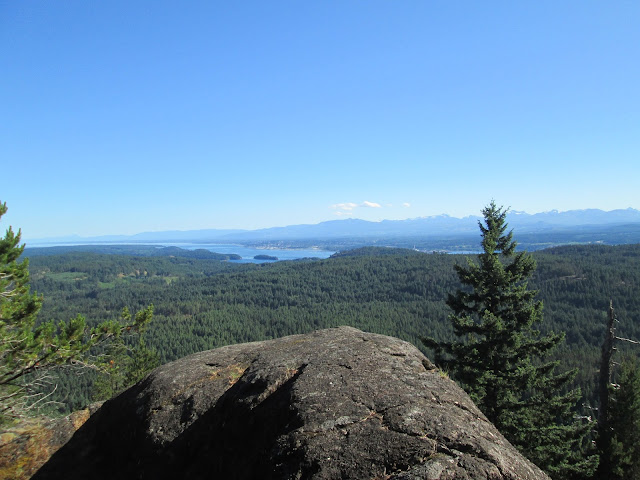 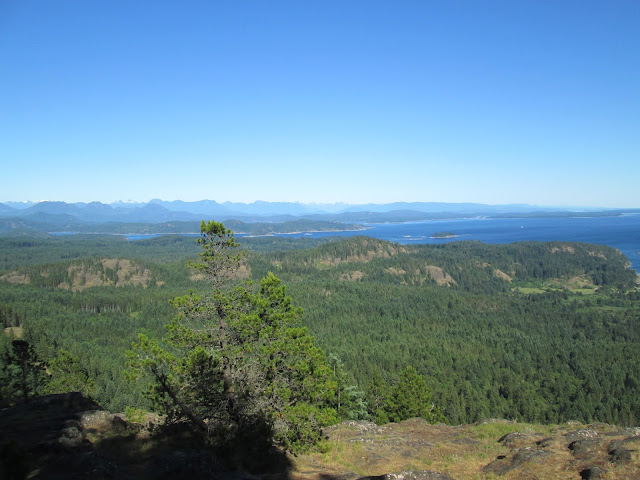 The next day, we were due to leave for Cortes Island, but we still had time for a short hike up Heriot Ridge.

The Heriot Ridge trails are located near Heriot Bay, so they were only a short drive from our campsite.

We got on the Hope Spring Trail, and soon we were on Heriot Ridge.  The views were quite nice and once again, I took quite a few pictures. 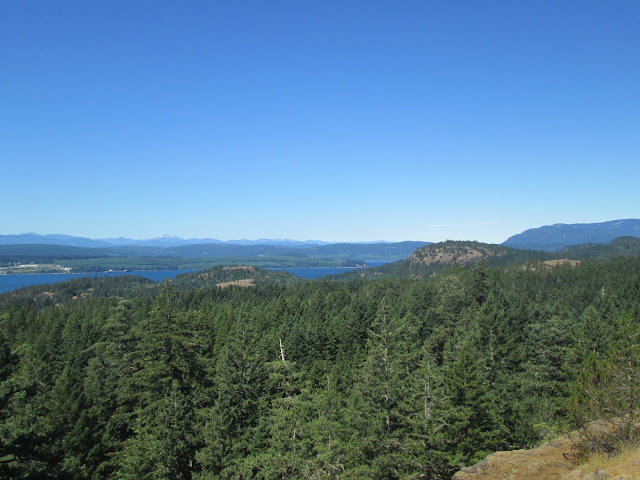 After descending Heriot Ridge, we proceeded to the Gowlland Harbour Trail and entered an area with some Douglas fir trees that were approximately 500 years old.  This trail is in a relatively flat, low-lying area and is typically very wet and muddy in early June, but once again, it was relatively dry due to this year’s unusual weather conditions.  After stopping to admire the trees, we turned around and headed back to the jeep, not wanting to miss our ferry.


We were soon departing the Heriot Bay ferry terminal and heading for Cortes Island and the next chapter of our adventure.  While our first stint on Quadra Island had been short, I enjoyed it immensely.  While I looked forward to Cortes, I was also looking forward to returning to Quadra Island.  It was truly a special place.
Posted by Clueless Hiker at 22:07