Waking up on Day 3, I was faced with the biggest decision of my hike: should I put on my only backup pair of socks?  My ill-advised river crossing on Day 2 had completely soaked my socks and a part of me died at the thought of putting them back on.  The stench was truly repugnant and they were so, so cold.  After much difficult deliberation, I decided the small measure of comfort I would gain by using my back up socks would be well worth it.  My original socks went in a bread bag which I buried as deep in my backpack as I could.

After packing up my tent, I started down Shuttleworth Bight.  It was amazing to hike on at low tide.  The sand was tightly packed enough to hold my weight without me sinking in. 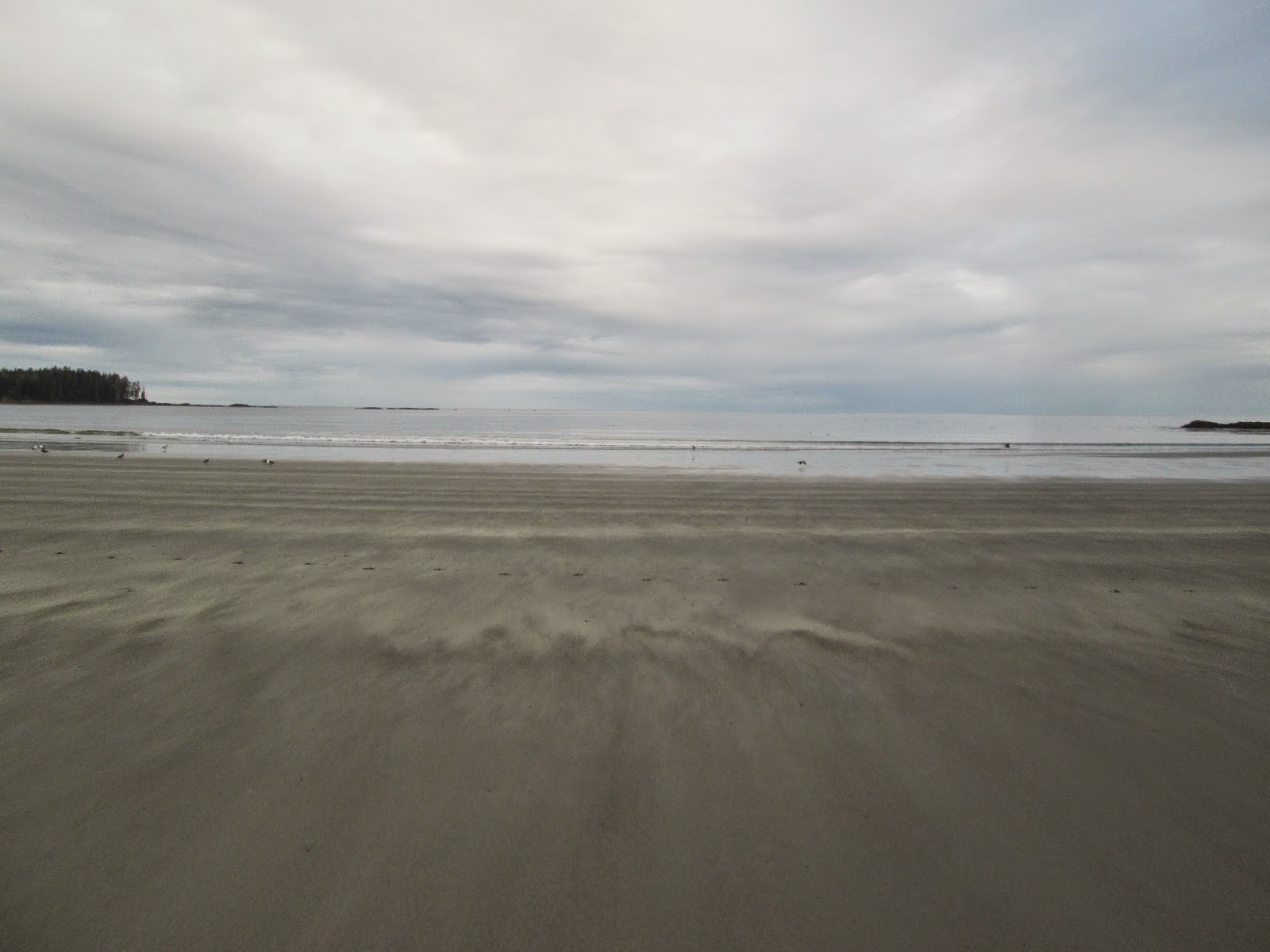 The trail soon headed inland again.  This inland trail was markedly easier than what I had hiked on the two previous days, but being that it was extremely wet, it felt just as hard.  There were a few muddy patches which I more or less avoided.  There was one spot however, that caught me off guard.  I stepped in and sank in up to my knees, effectively soaking my backup pair of socks already.

I soon came to the cable car over the Stranby River.  Without stopping, I climbed onto the cable car platform, hopped in, and pulled myself across.  I wasn't even going to entertain the idea of doing anything else.

I was pleasantly surprised at how easy the cable car was to use.  I can say with quite a bit of certainty that they are much easier with just one person in them, rather than two.  It took maybe two minutes to get across the river.  It made my Nahwitti crossing look even stupider. 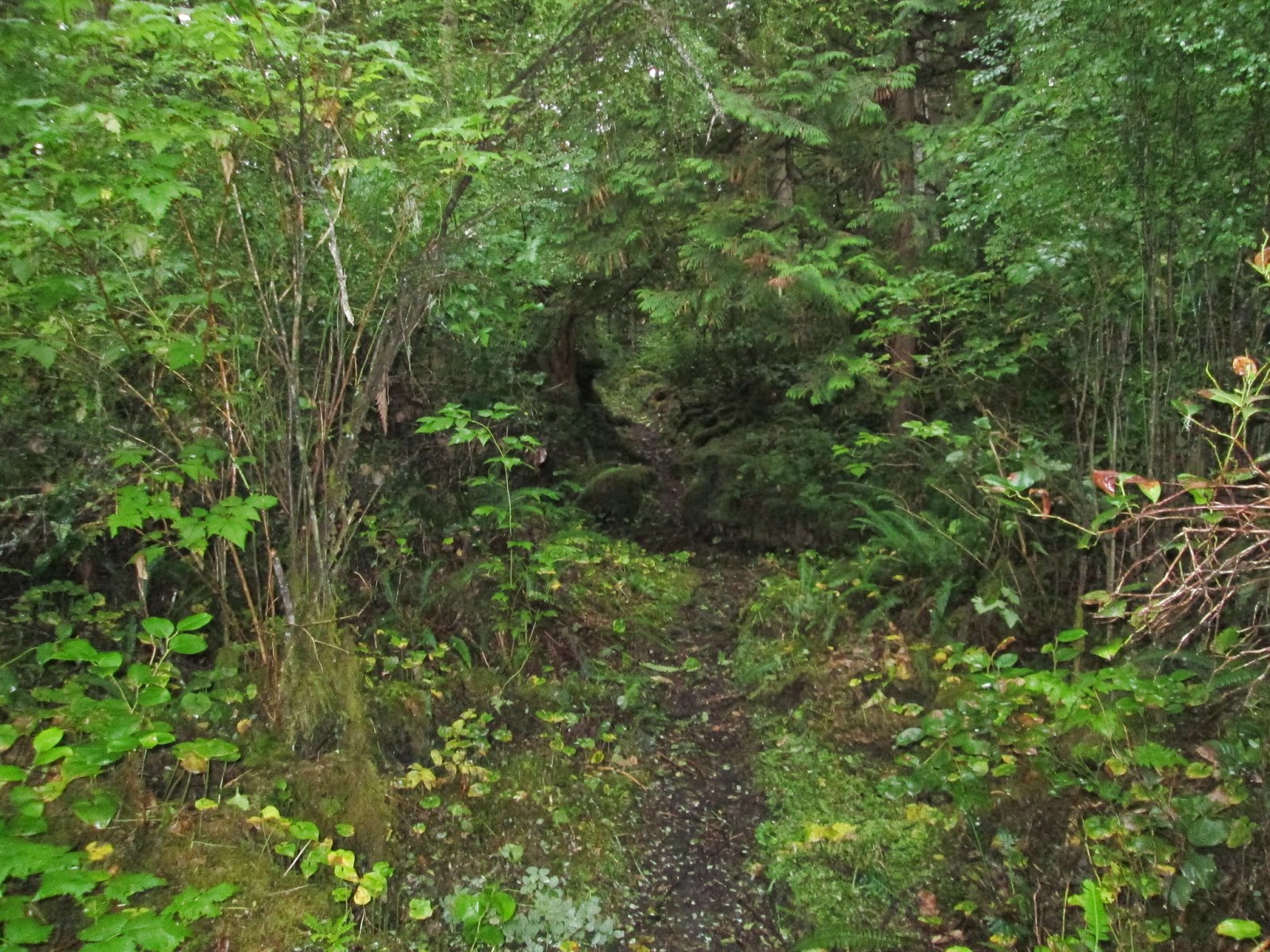 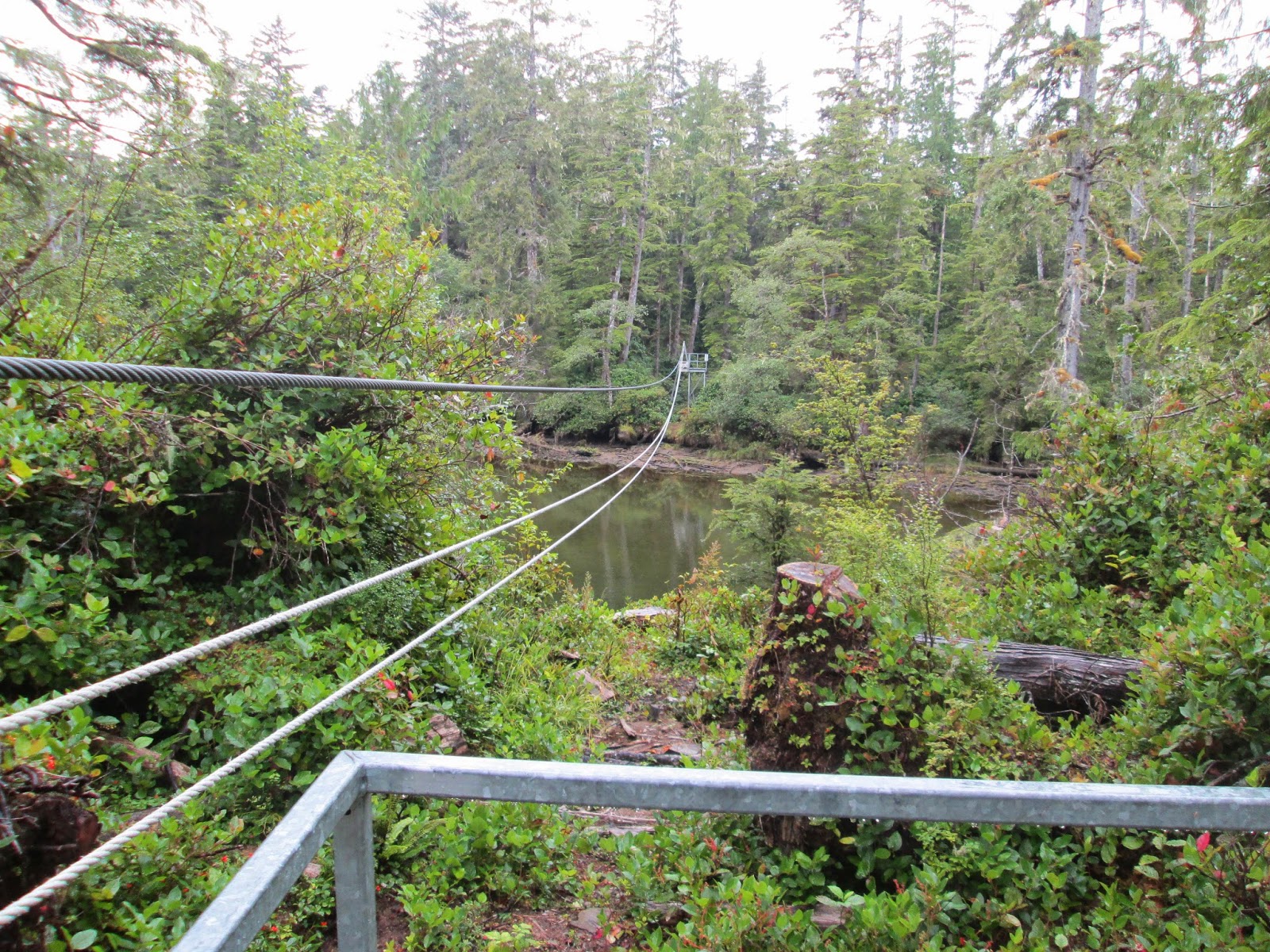 After another short section of inland trail, I came out to the coast again.  This section is called the Christensen Coast and it is the longest section of beach hiking on the NCT. 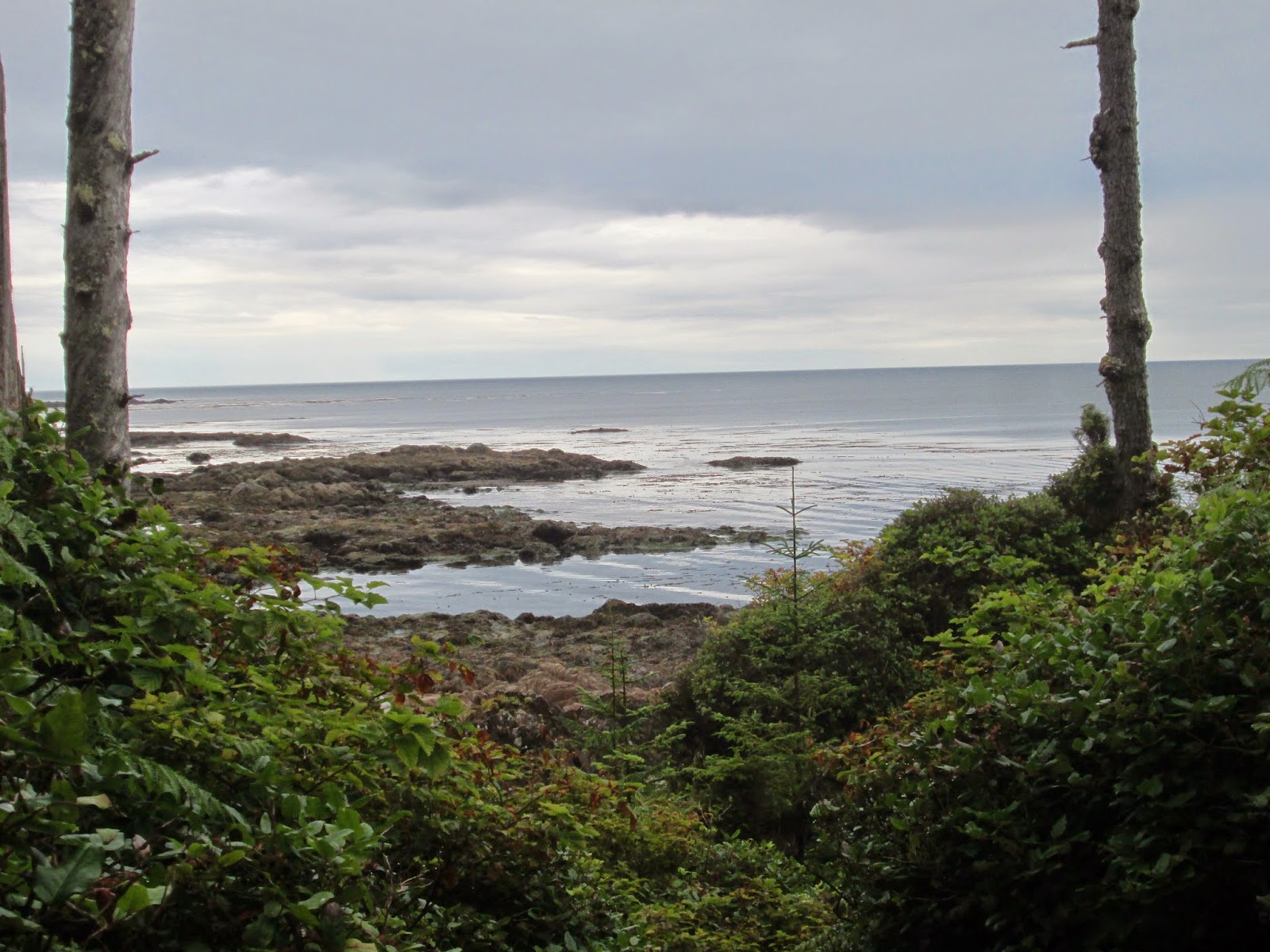 I encountered a mixture of sand beaches, cobble beaches, gravel beaches, and beaches with tidal pools and exposed rock shelves.  I found that the easiest beaches to hike on were the ones with the rocky terrain, though the rain did make it a little slippery.  The cobbles were probably the worst to hike on.  They were also very likely among the most dangerous things on the trail to, as you don't really keep your guard up when you are hiking on them, so twisting an ankle is a very real possibility. 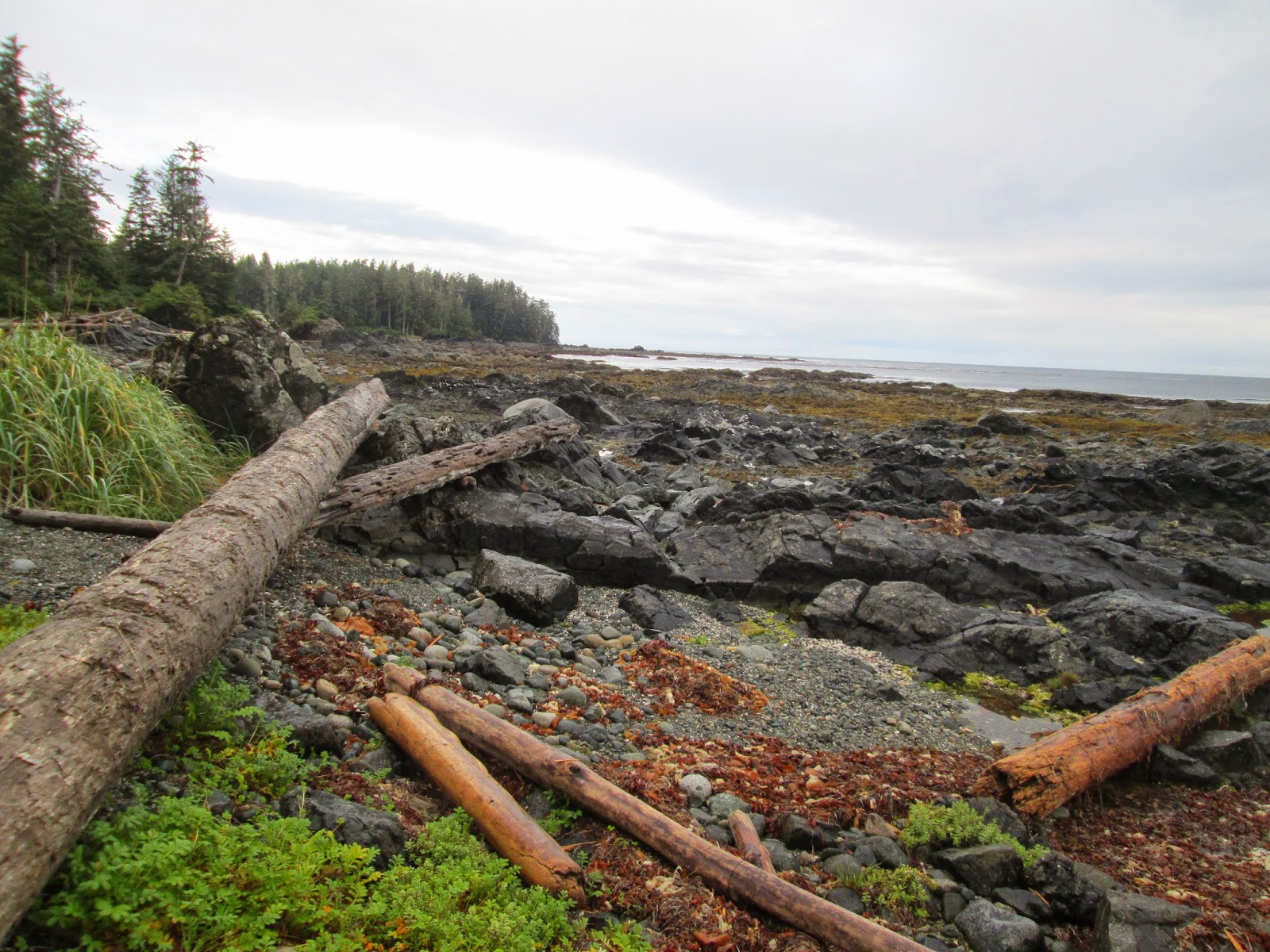 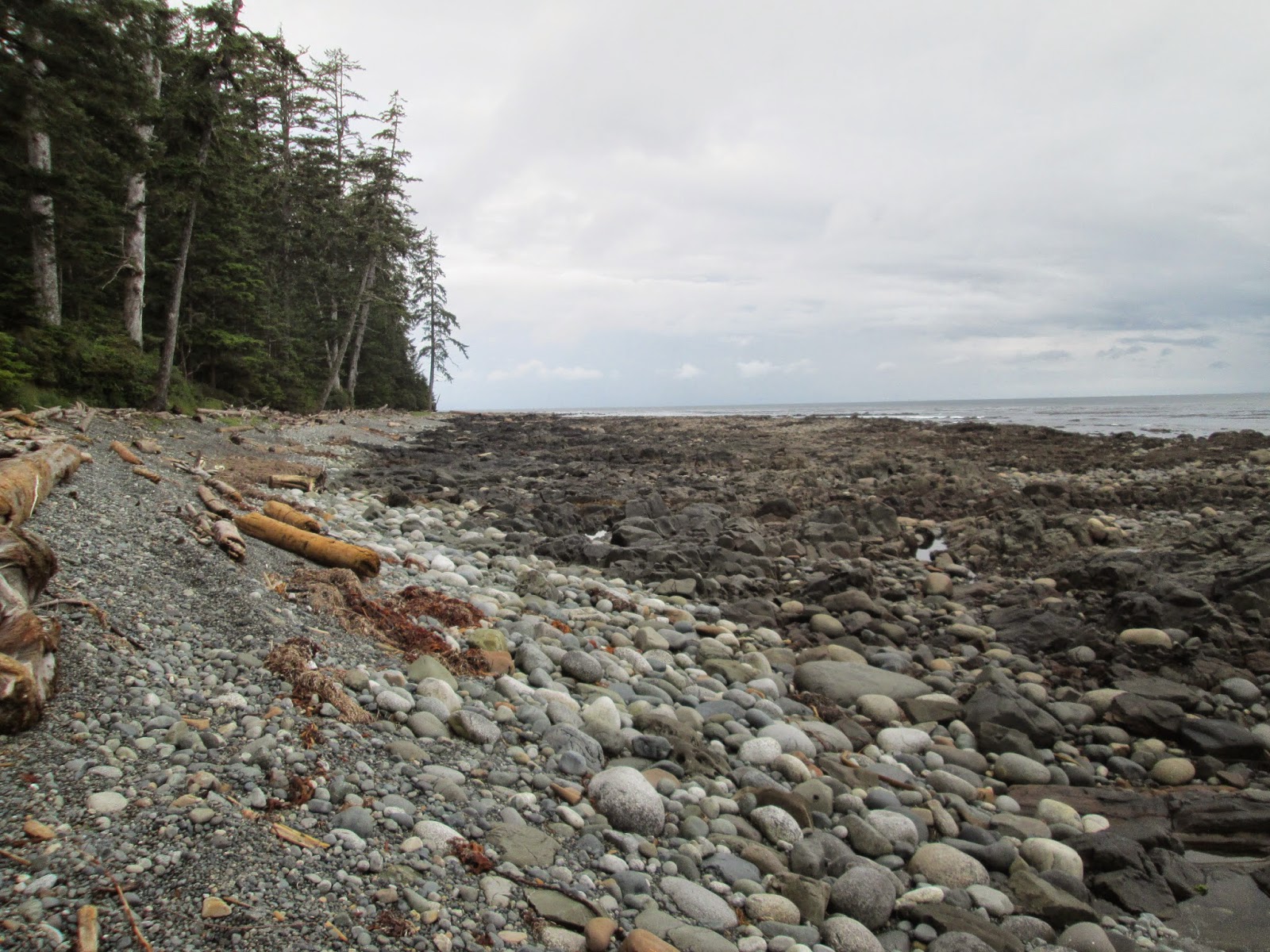 One thing that was really nice was that I never had to worry about tides on this section.  Even the areas that I hiked at high tide didn't present any real concerns.  Maybe at an abnormally high tide one or two places would be tricky, but even then, I can't imagine ever being stuck for too long on this section of trail.

As I approached Laura Creek, the weather cleared up a bit, so I decided to take my lunch break.  I removed my trusty pack cover and got my lunch out.  The beach was pretty windy, so I got what I assumed was a brilliant idea.  I thought that I could take out the various components of my tent and tie them onto a tree branch so that they could dry out.  My tent was pretty soaked from the night of rain, and I hadn't been looking forward to setting up a wet tent.

I got my tent stuff out and found a tree with a long branch to tie it all to.  It was windy enough that I was a little concerned that it might blow away, so I tied the various parts together.  My footprint was tied to my tent, which was tied to my tent fly.  After I finished my convoluted set up, I stepped back and marveled at what I had created.

"I tied that perfectly!" I remarked.  "It's not going anywhere.  It'll probably take me like ten minutes to get it down, that's how well it's tied!"

Then, right on cue, the blue skies that had come in were replaced with ominous dark clouds that immediately sent down a healthy pouring of rain.  After a moment of shock I scrambled to get my tent down.  It was tied quite well, as it almost took me the ten minutes I had said to get it down.  As I put it back in my pack, I realized that it was actually wetter than it had been.  I began screaming nonsensical obscenities at the sky.  I think at one point I may have even told the sky that "me and you are finished!" 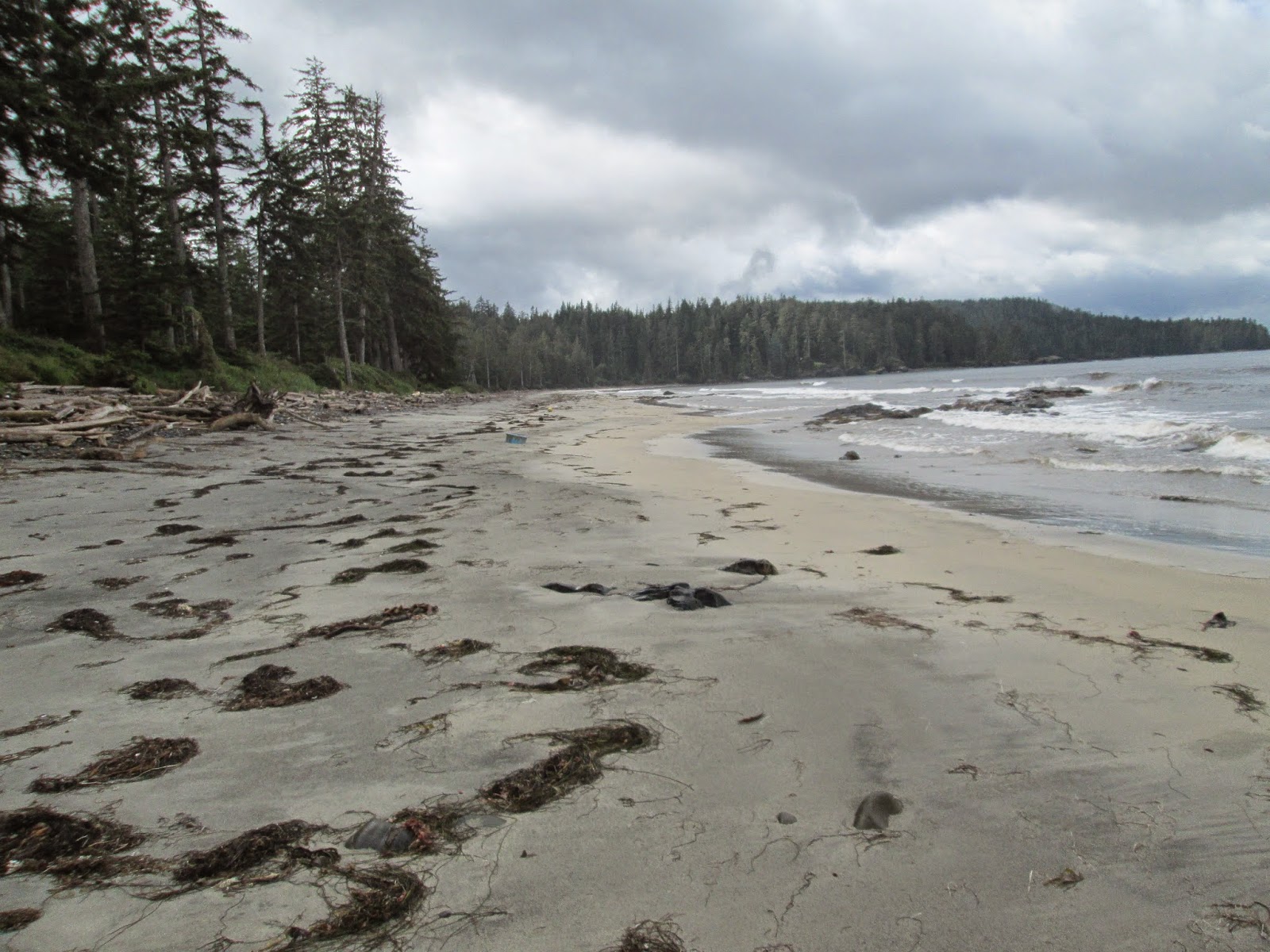 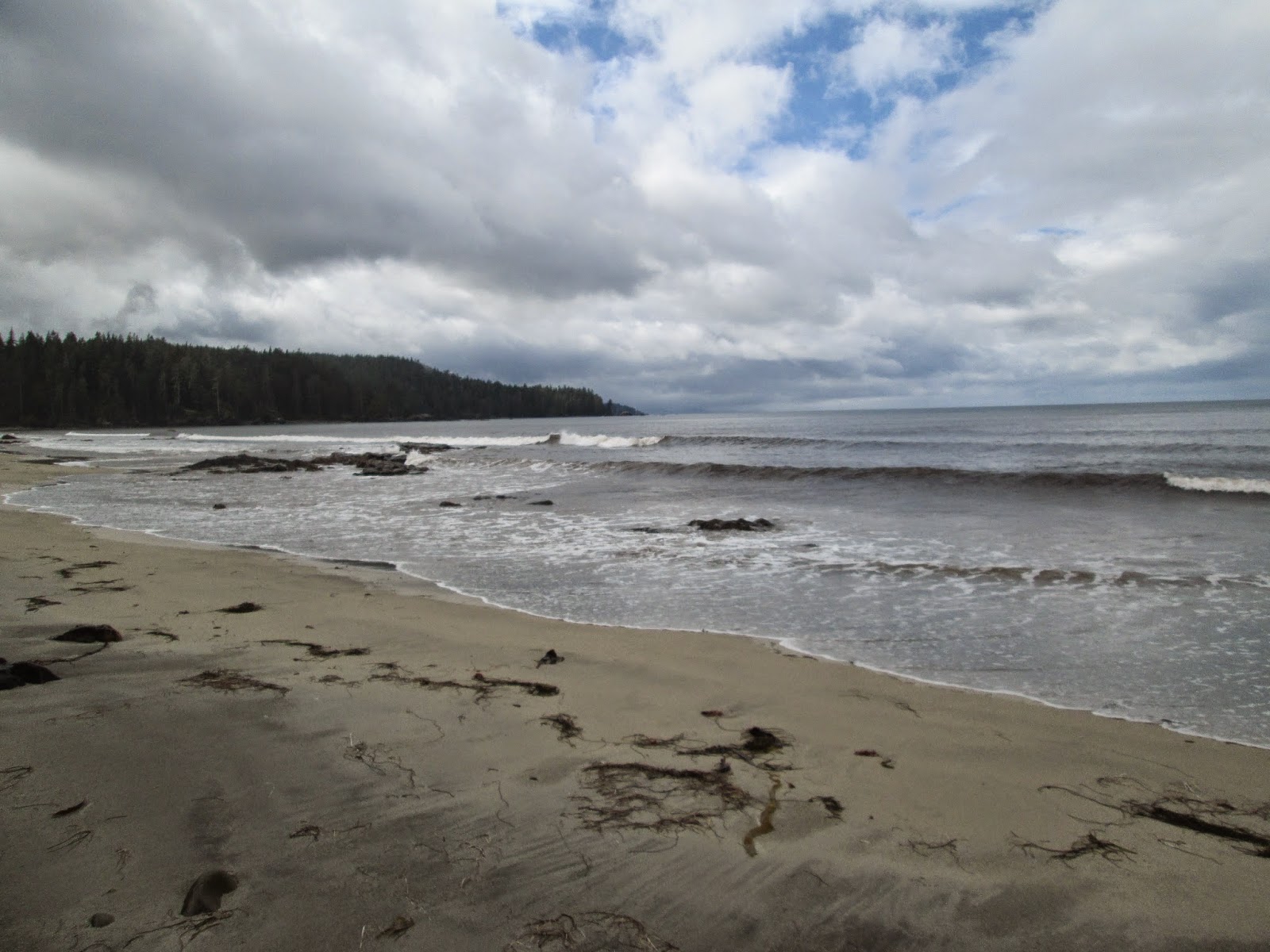 I finished my lunch and headed out again.  After a short beach hike I was headed back inland to hike around the Nahwitti Cone.  I was looking forward to a break from the beach hiking.  It was difficult to always be watching my footing, but I had to, especially with everything being so slippery.  I was also really looking forward to not having to climb over piles of driftwood and over awkwardly angled rock shelves.

Then I took a good look at the inland trail and remembered that I was hiking the NCT, so naturally, there was going to be no such thing as an easy hike. 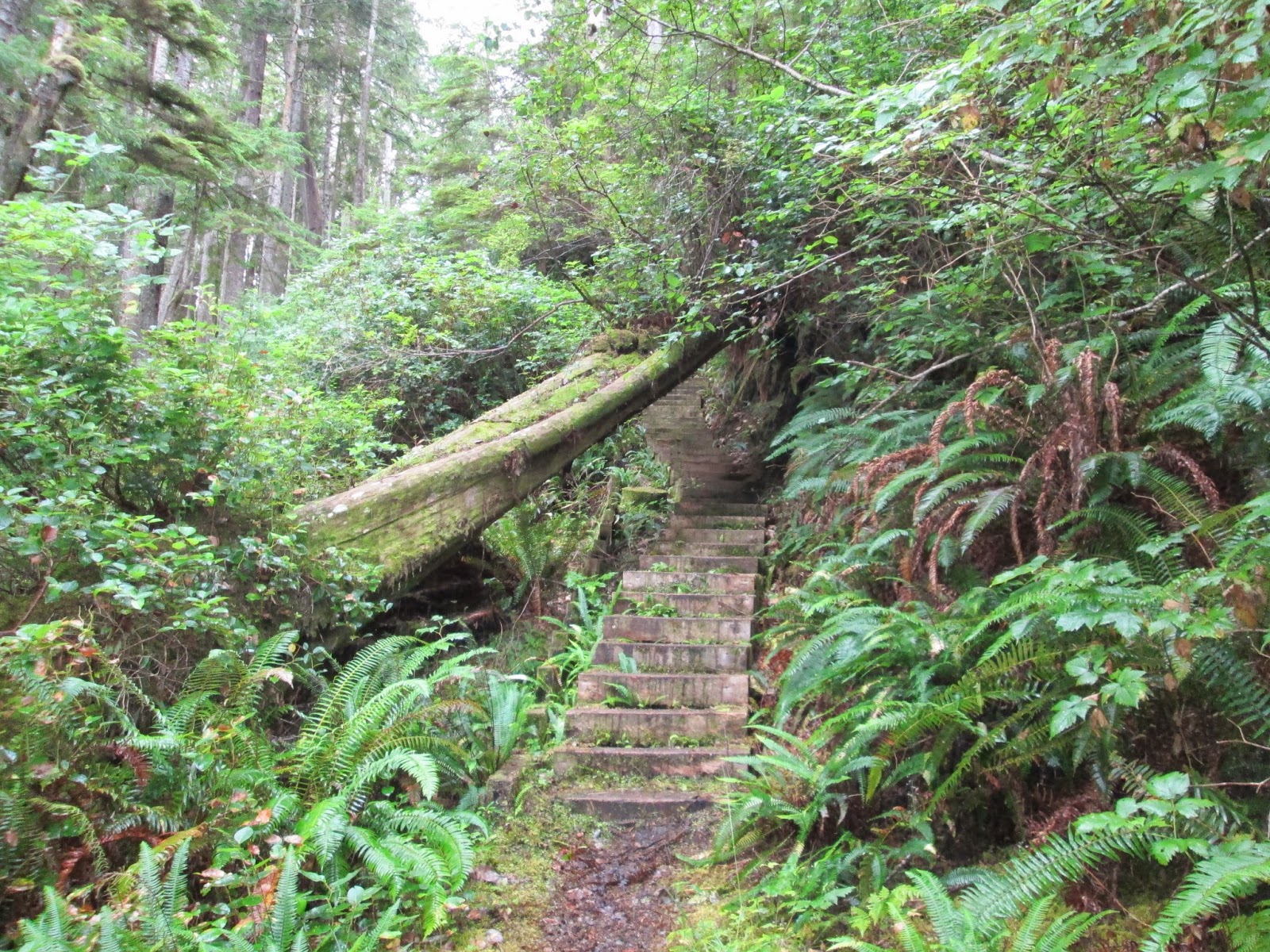 To be fair, this section of hiking wasn't too bad, but the rain was starting to really wear me down, so it seemed a lot worse than it actually was.  It had a pretty good system of boardwalks, though there were some pretty muddy sections on some of the steeper climbs.

There were a few creek crossings on this section.  Two of them had the NCT's idea of bridges: logs with a single hand rail.  Somehow this seemed like a microcosm of the trail: you get no more help than what you absolutely need (though I guess the handrail is a bit of luxury). 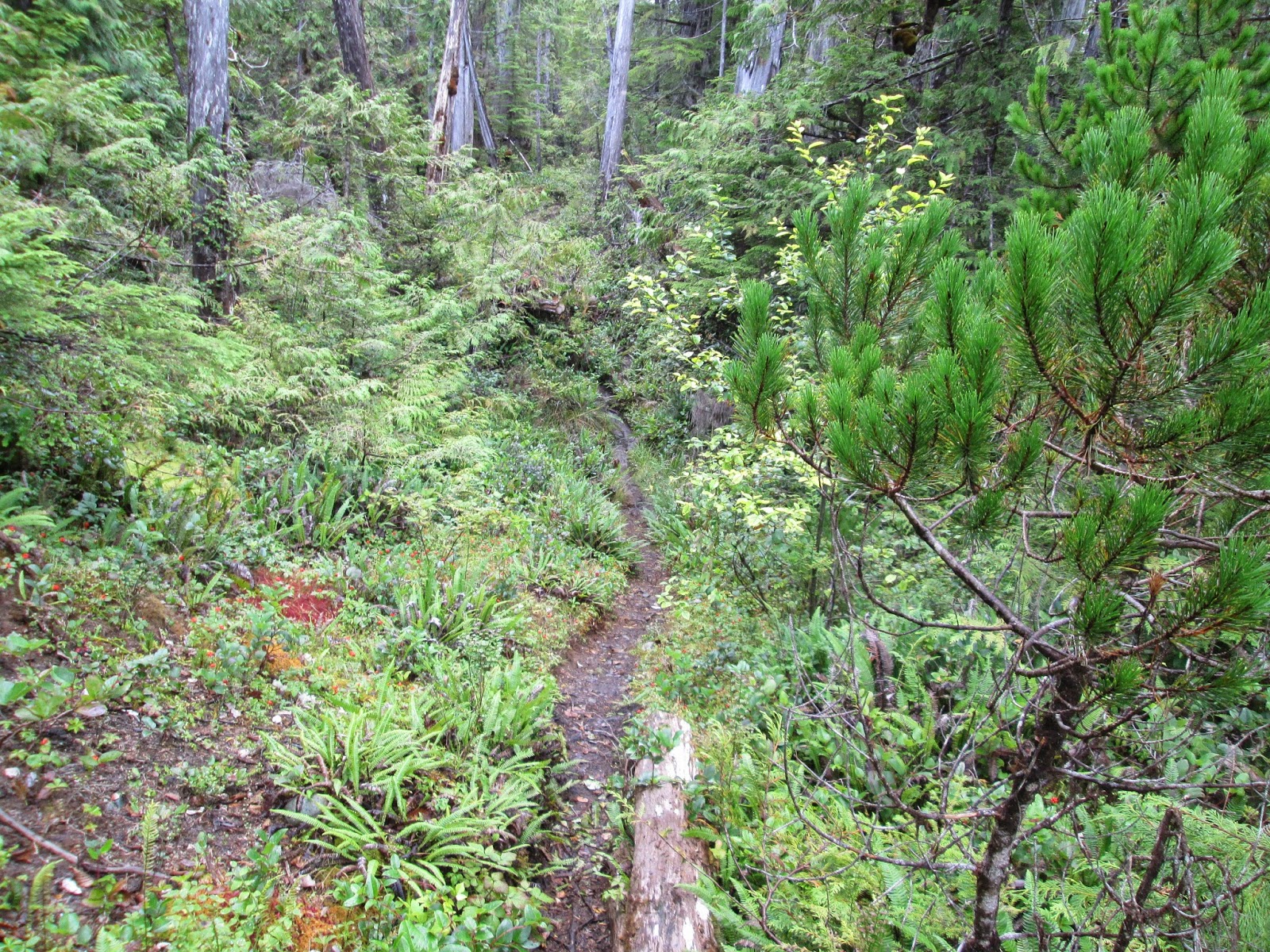 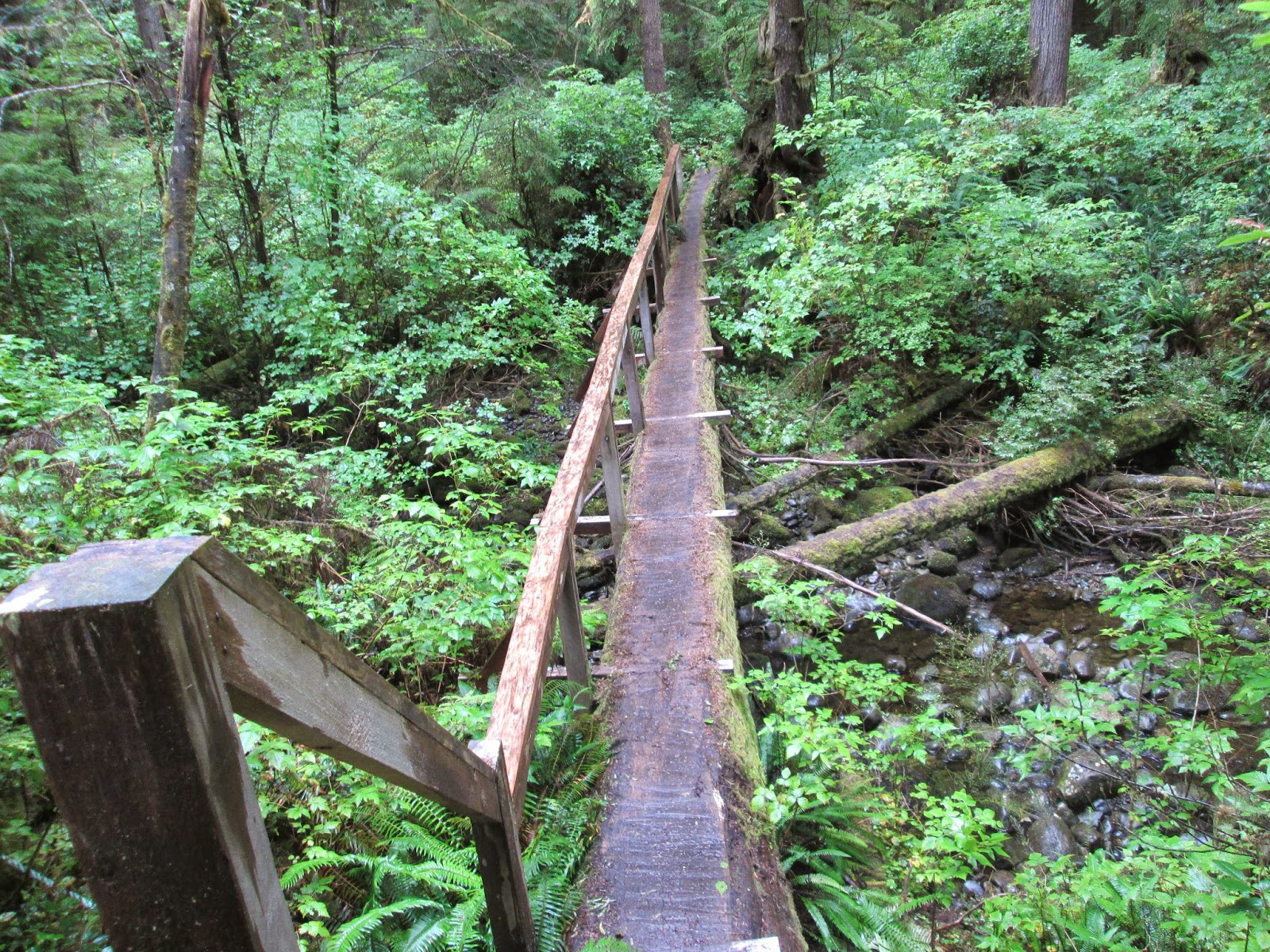 I soon came to Laughing Loon Lake, the only lake on the NCT.  I didn't stop for too long because of the rain, but it seemed like a nice enough lake, dotted with tons of lily pads.  I would say that the hike along the side of the lake was one of the highlights of the whole NCT for me. 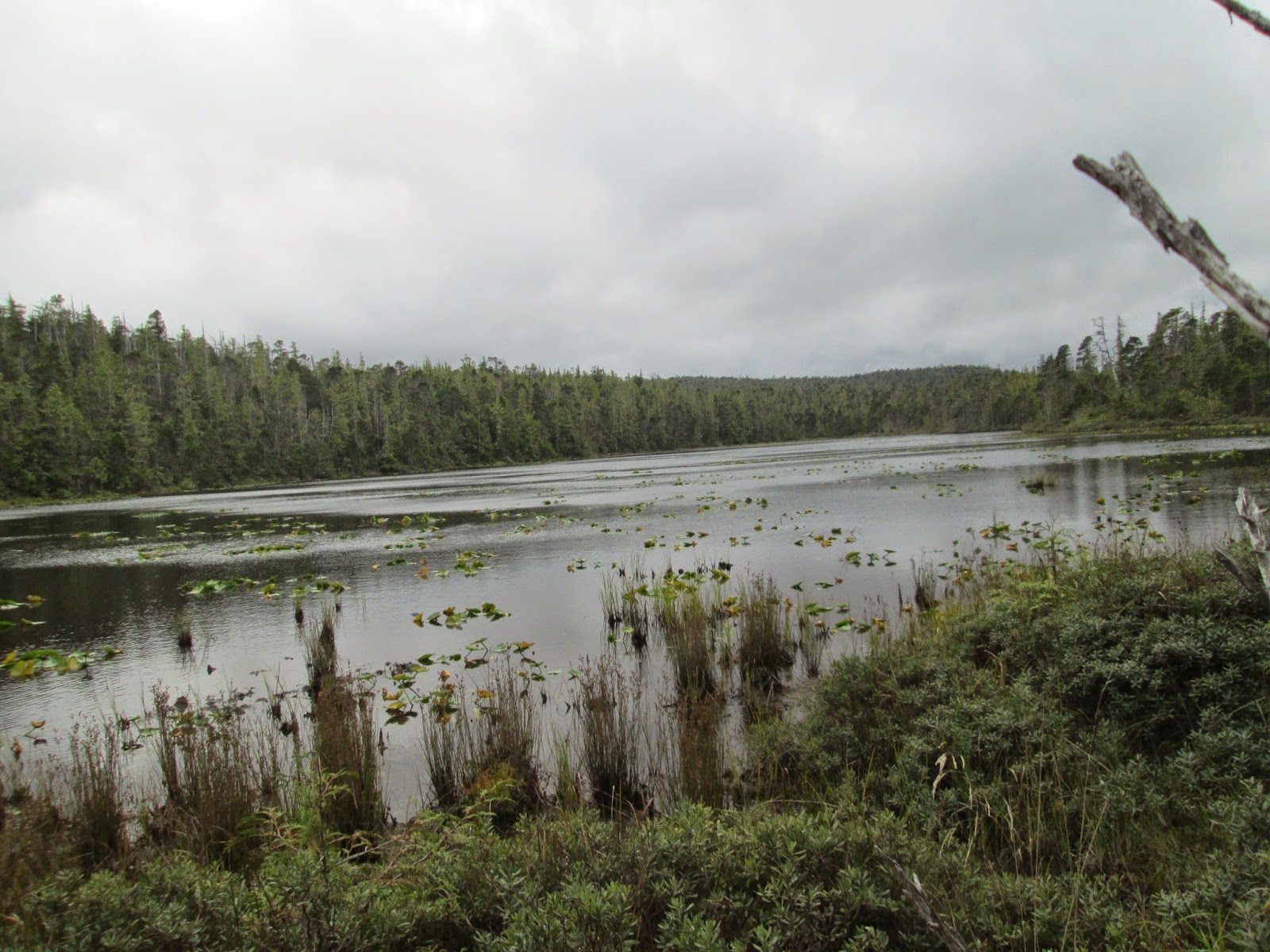 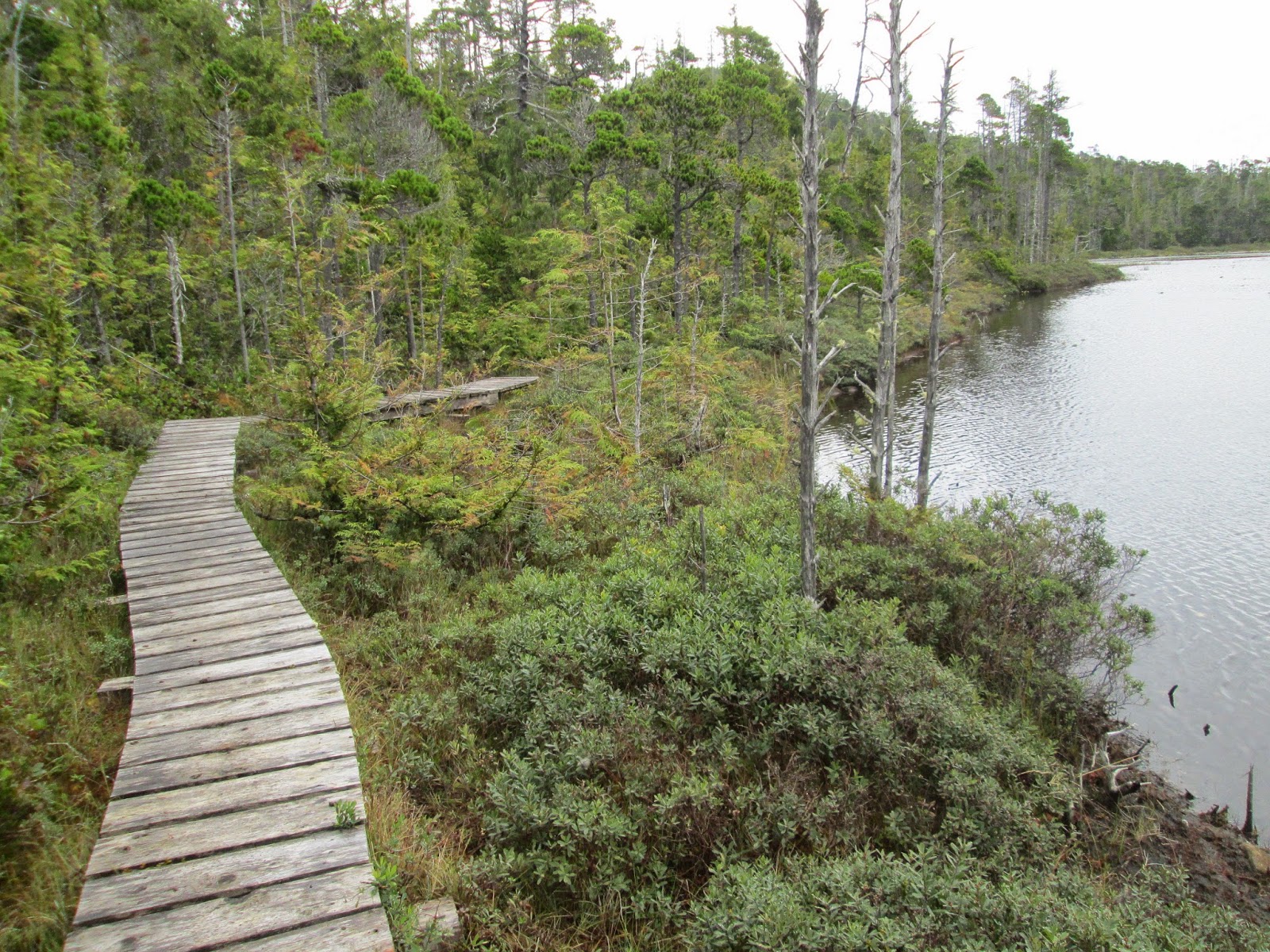 Blue skies returned as I approached Nissen Bight, though I had learned not to trust them.  I think the most common area to camp on Nissen Bight is on the western side of the beach, closer to the outhouse, but I camped on the eastern side, close to the water source.  I found a pretty nice camp site up from the beach that had a little lean-to that I used to dry my tent out (again).

I was beginning to experience pretty severe paranoia about the weather, so while I had my tent things out, I was completely unwilling to leave them out of my sight for even a minute.  I was positive that it could start pouring rain any second.  Eventually, some darkish clouds started to come into sight.  I had no idea if they were headed towards me or away from me, but I immediately started setting up my tent.  I had this strange feeling like I was being stalked by rain clouds.  They always seemed to find me.

After everything was set up I soaked my feet in the ocean which was another huge mistake, as I had sand in the crevices of my feet for the rest of the hike.

It began raining again not long after I went to bed, but I didn't really care.  I was planning on taking Day 4 off to relax, so for the first time in a few days, the weather really was a non-factor for me. 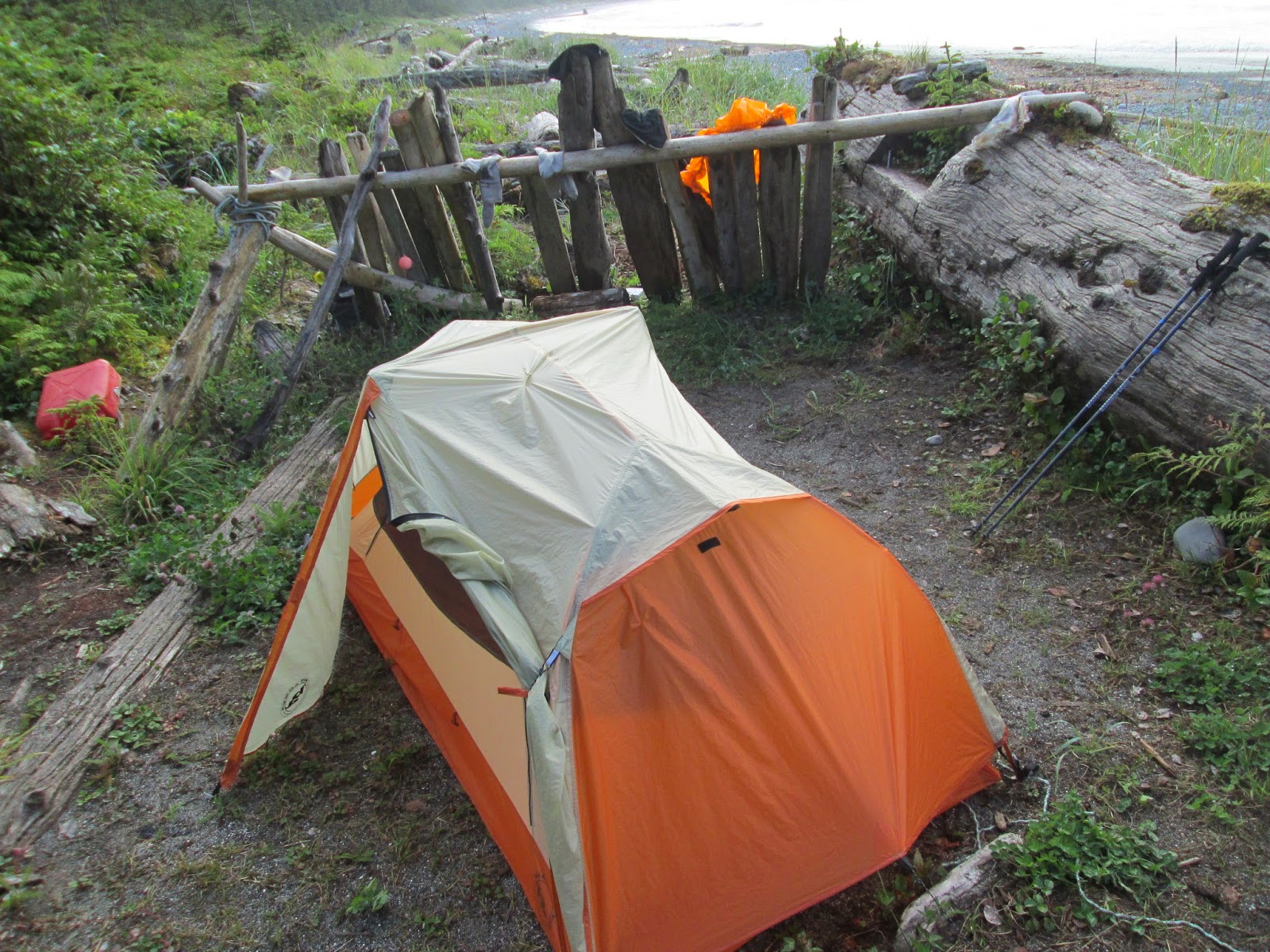