When I got up in the morning I was amazed at how dry my tent was, given the area's reputation for heavy fog.  I hadn't bothered staking out my tent (as it was on a tent pad and I couldn't figure out how) and yet there was no moisture from condensation inside.  I thought maybe this bit of good fortune was a sign of more good things to come.

I packed up my campsite and headed down the short inland trail to the first cable car crossing.  I got to the cable car, but decided to fill up my water in the river before crossing.  I wasn't sure if there would be any access to the river on the other side, and I knew there would be no water until at least Cape Sutil (5 km away).  While I was filling up, I noticed just how much higher the cable car went than I had originally thought.  I remembered finding the cable car I used on the West Coast Trail quite difficult, and suddenly I had visions in my head of making it half way across the Nahwitti River and getting stuck.  I knew there were people behind me on the trail, but how long it would be before they found me?  My vivid imagination gave me this funny little image of a cougar and some wolves working together to pull me across the river to their side where I would become the main course in a spectacular feast.

After I finished filling up my water bottles, I tried to gauge how deep the river was.  Where I was standing it didn't go past my ankles.  It didn't look like it got much deeper anywhere else.  I thought I could try walking across, and if it got too deep, I would just turn back.  I took a couple of steps and it was still ankle deep.  I took another few steps and it was still pretty shallow.  Then, out of nowhere, I sank in to my knees.  I probably should have turned around here, but for some reason I kept going.  Soon the water was up to my thighs, getting very close to my hips.  At this point I figured I was soaked anyways, so I might as well trudge across the rest of the river.  I made it across, completely soaked from my waist down.  My Gore-Tex hiking boots are incredibly water proof, but unfortunately they have no protection to water coming in through the top, so I ended up filling my boots as the Irish would say.

You would think that I would be in the clear now that I was across the water, but this ordeal was just getting started.  Without going into the river again and going up or down stream, there was no easy access back up to the trail.  The other cable car platform was a good ways up from the river, and unlike on the other side, there were no trails to give access to the river.  My only options were turning around (which would have been the smart thing to do) or trying to pull myself up an extremely steep bank.  I thought to myself that I had already come this far and I didn't want to have gotten soaked for nothing, so I elected to try to pull myself up the bank.  After a bit of struggling I managed to get up the bank, where I was positive that I would be finished with the unpleasant situation I had put myself in.

Unfortunately, I was wrong once again.  The other cable car platform was maybe 20 feet away, but sadly that was 20 feet through really thick vegetation, over many fallen trees, and across really uneven ground that was obscured with tree branches and bushes.  It was impossible to tell what was solid ground and what was something I would go right through, and all of the bushes in the area were growing so tight together that going through them was almost like trying to go through a brick wall.  I ended up crossing over a series of fallen trees with no solid ground between them, so I had to pull myself from one tree to the next very carefully.  After about five minutes of this, I reached a dead end where the only place to go was back down the bank, so I had no choice but to go back and try to find another way through.  I abandoned the tree idea and tried to fight through the vegetation, which was even harder.  I got pretty scratched up from this, and based on some of the rashes I developed later, I'm sure some of these plants weren't meant to be touched.  Eventually I burst out of the bushes back onto the trail.  I threw down my hiking poles, raised my arms up, and loudly declared "I win, what now trail?"  Then I took a good look at myself and saw all of the dirt, mud, and blood, and decided to retract my declaration of victory.  This was a stalemate at best. 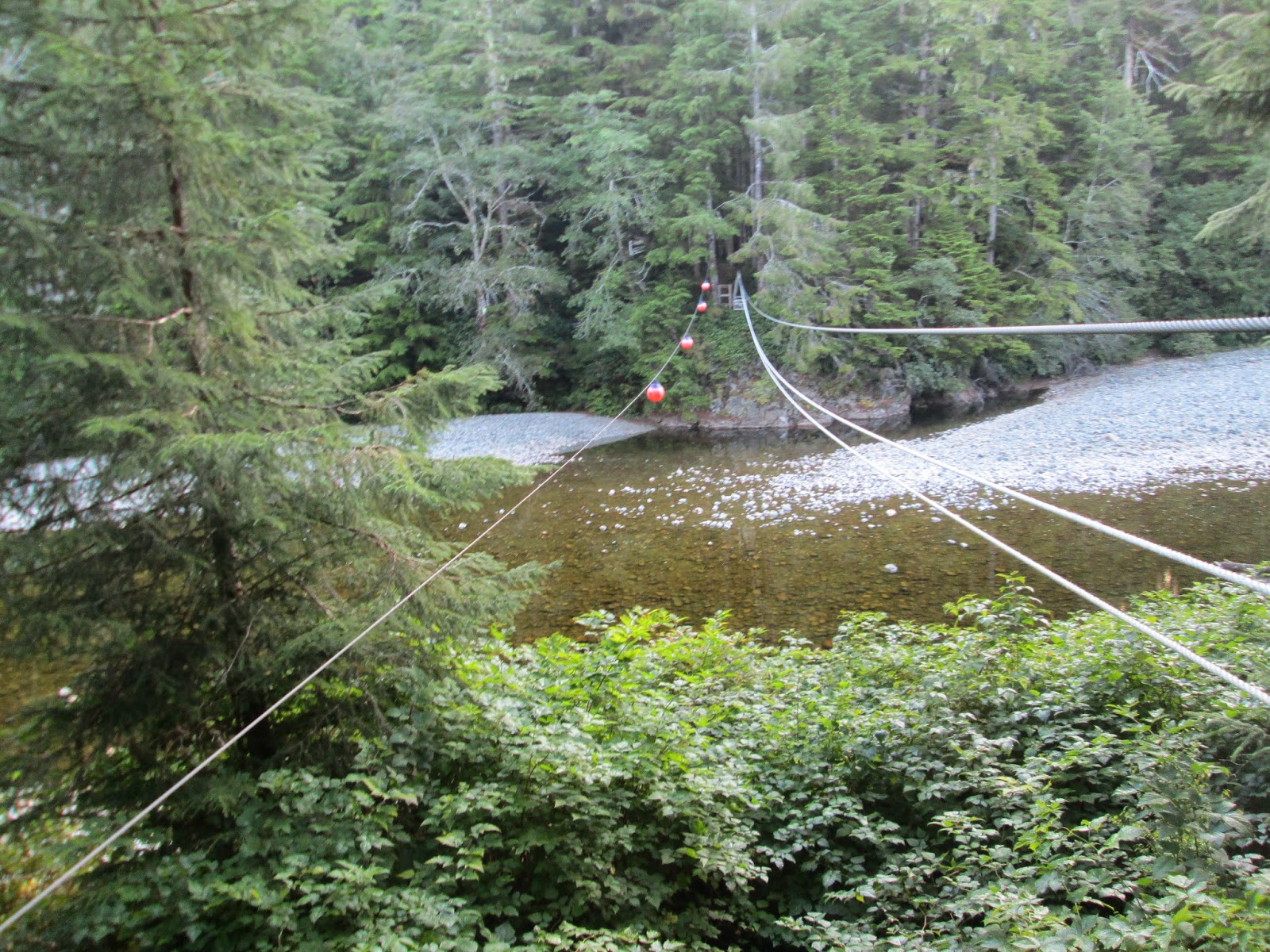 Just to really rub some salt in my wounds, a couple of minutes later I came to a stretch of trail that was almost as low down as the river.  I wondered if the trail had deliberately altered its route just to make me feel even stupider.  It was beginning to feel like a sentient being.


The next section of trail went through a pretty dense forest, and I managed to lose the trail a couple of times.  At one point I turned onto what I think was an animal track or maybe an old trail.  I got back on the trail and began wondering if I would do anything right ever again.

I climbed over "Long Leg Hill" which was pretty strenuous.  There was a bit of rope work on this climb, and I had quite a few close calls on some slippery roots.  After I reached the top, I descended the longest set of stairs on the trail.  It wasn't too difficult, but I can imagine in heavy rain it would be really slow, and fairly dangerous. 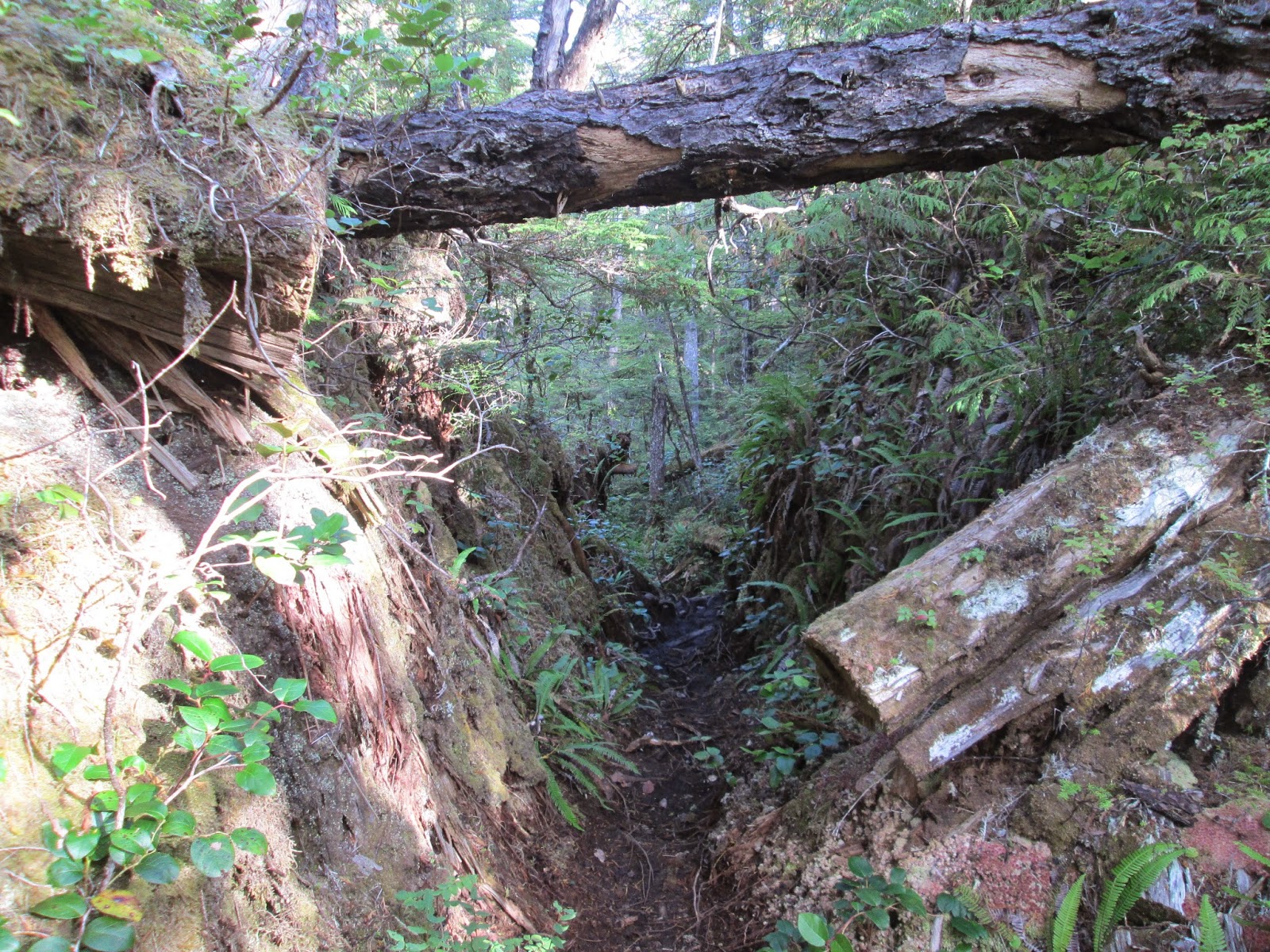 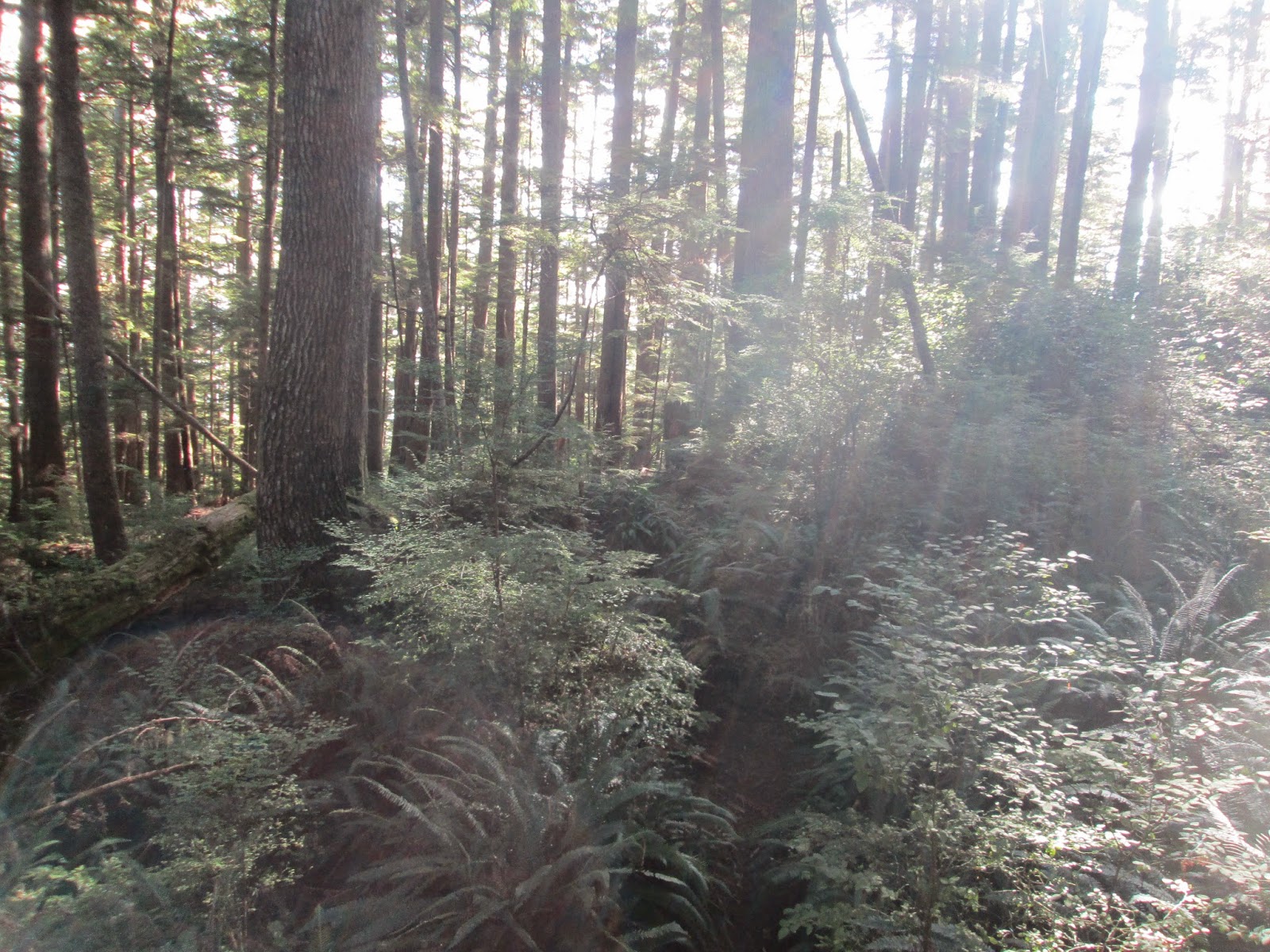 After the Nahwitti Stairs I was on the beach again.  I managed to find a good water source here which made me quite happy, as I had heard not to count on water until Irony Creek.  There were a few short sections on the beach broken up by short inland trails.  After a bit of hiking I came out to a long section of beach that led towards Cape Sutil, the northernmost point on Vancouver Island. 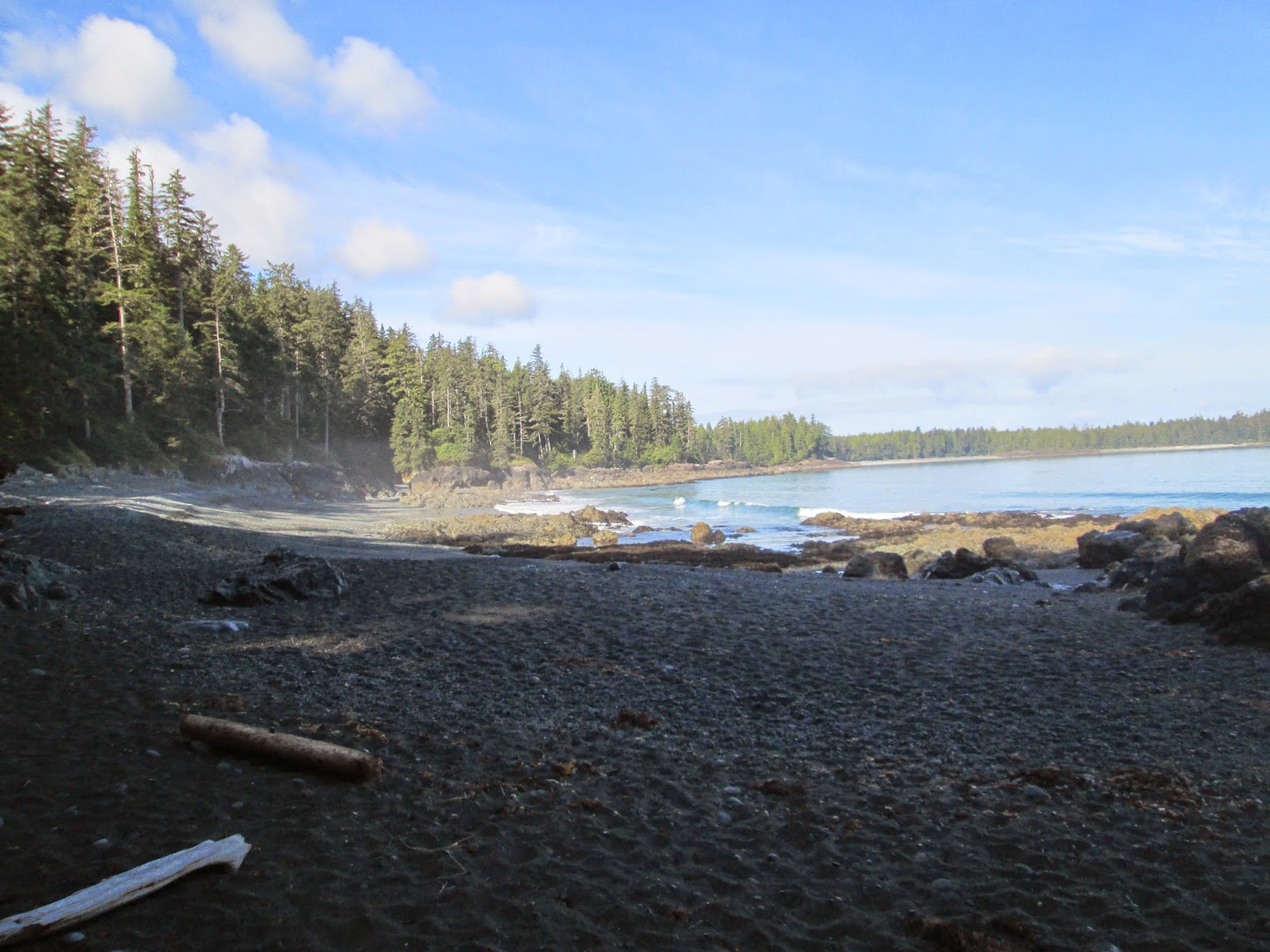 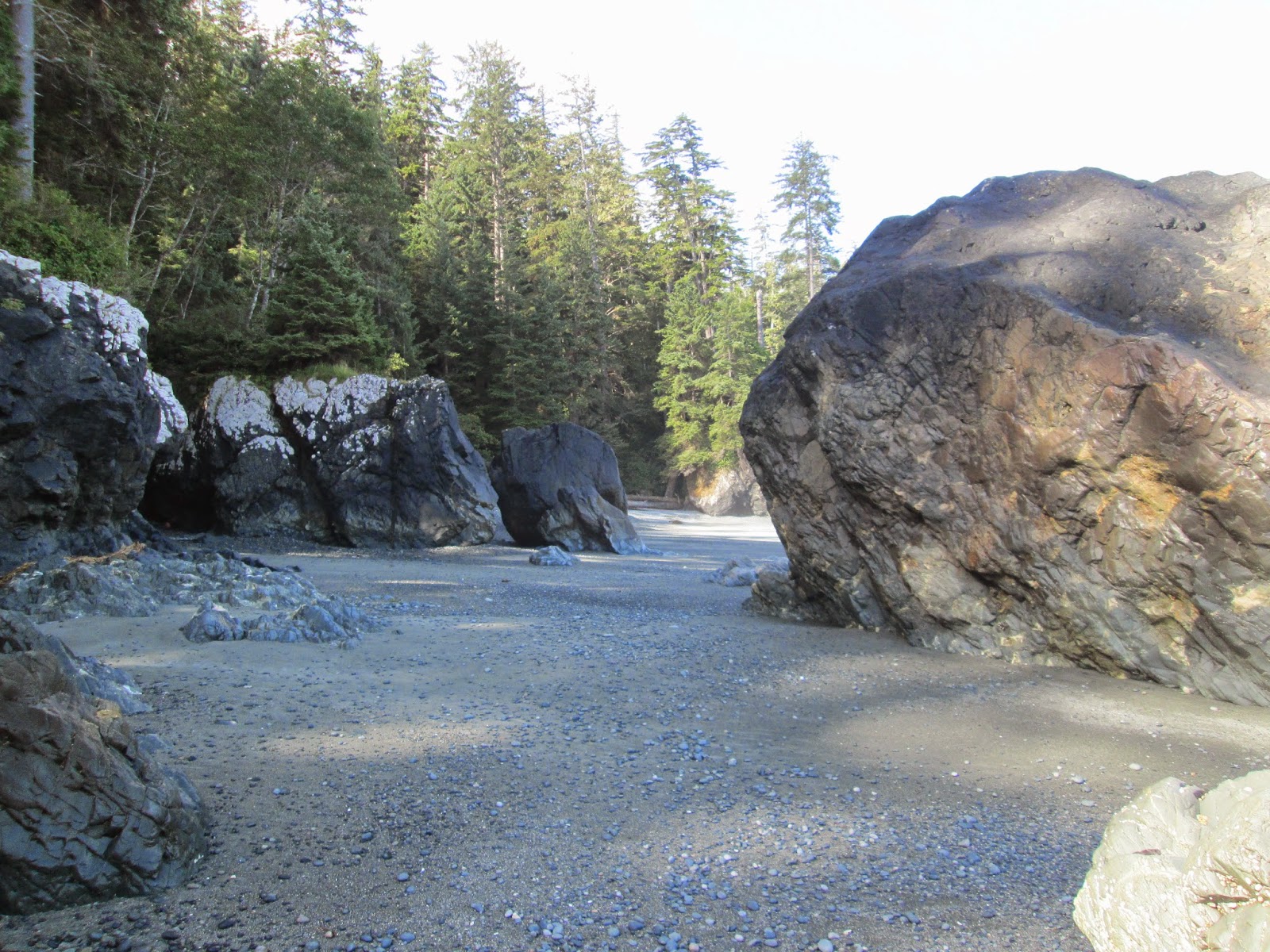 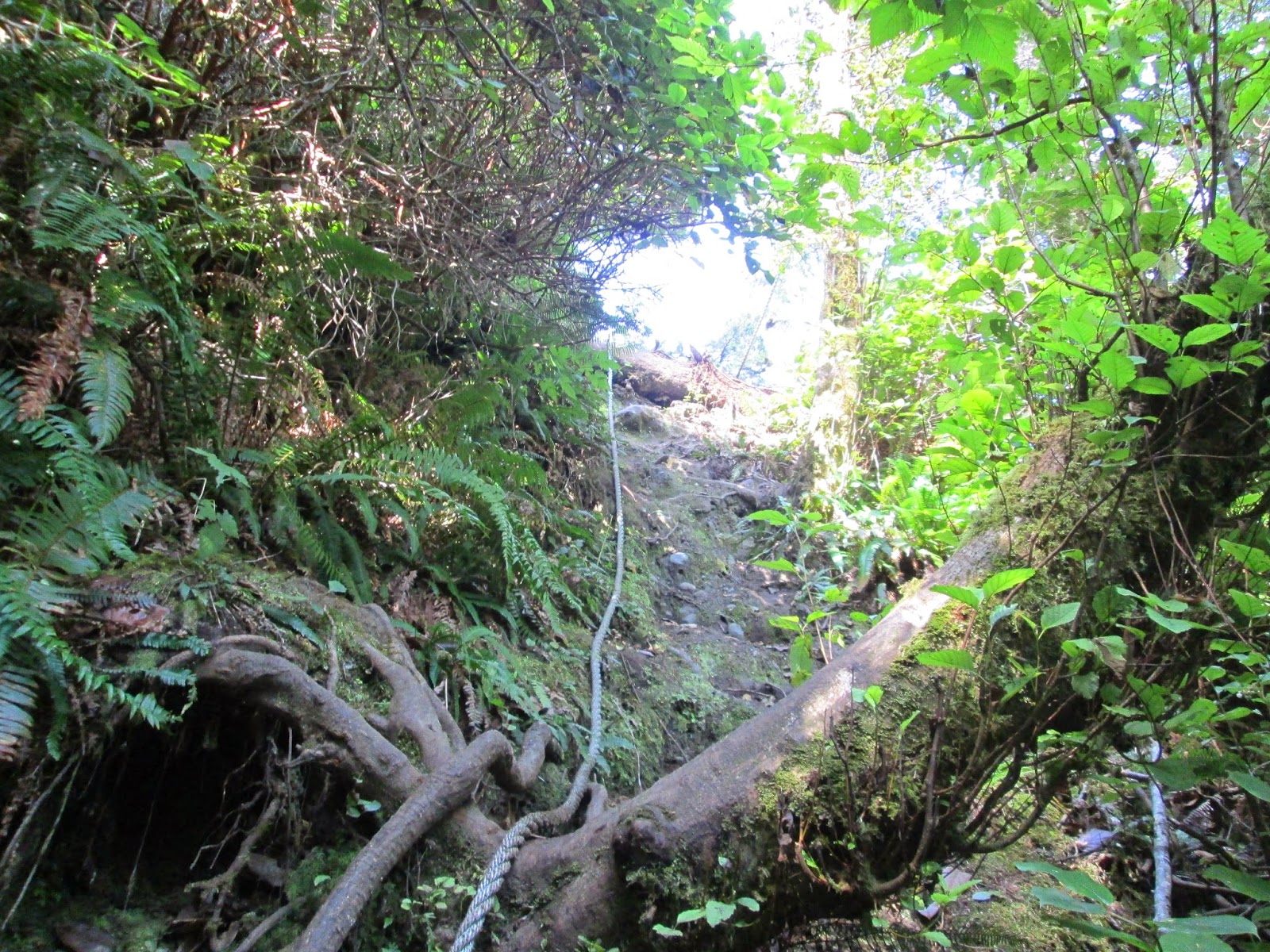 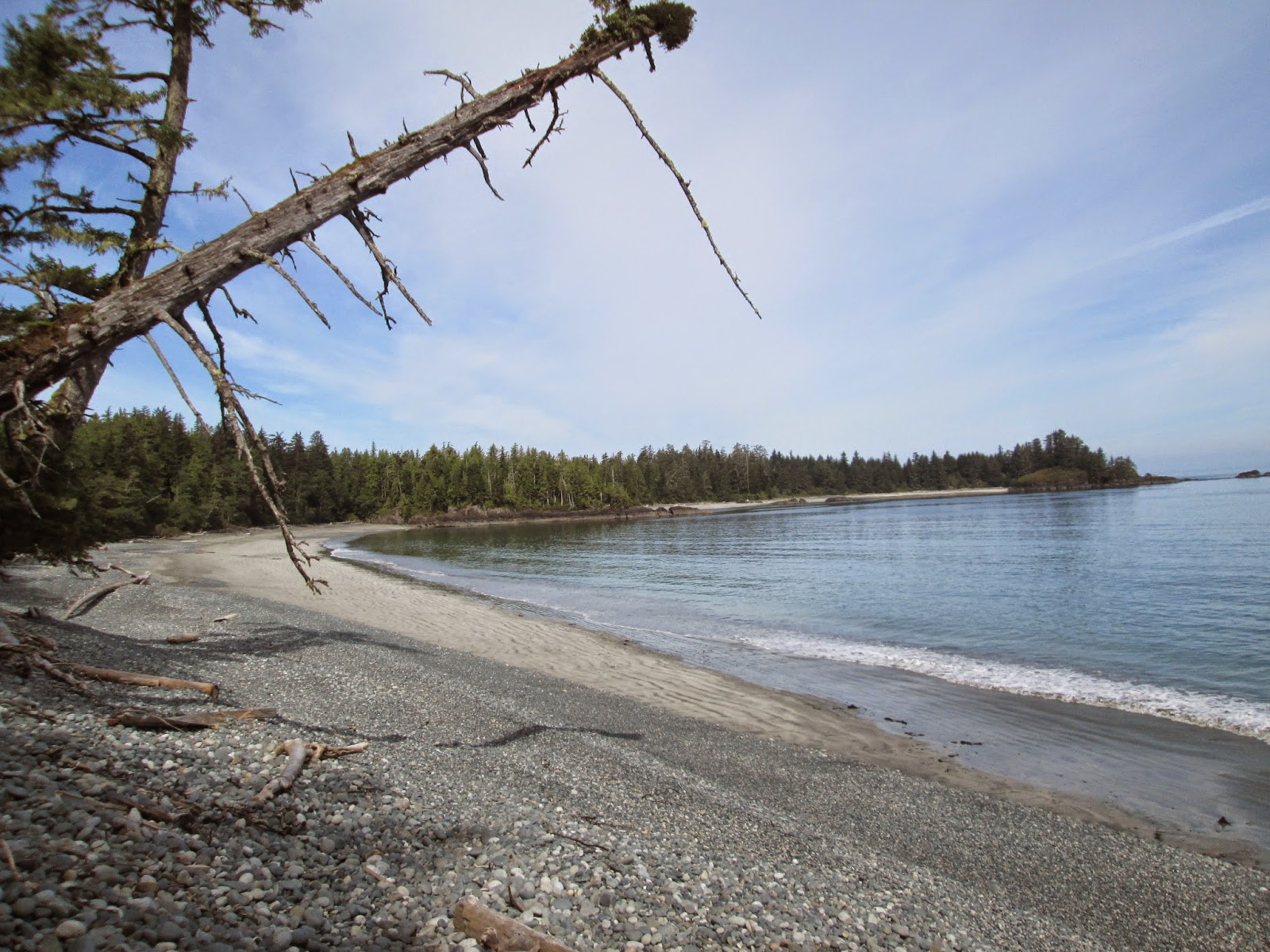 I had lunch at Cape Sutil before continuing on.  The trail bypasses the actual Cape since it is on a Native reserve (it was the site of the historic Nahwitti village), so I ended up doing an overland section and ending up on the other side of the cape.

After Cape Sutil the trail got a lot easier, with quite a bit of beach hiking.  At this point I had seen the majority of ropes on the trail, and while I might have run into one or two more, that part was basically over.

At most of the beach accesses I had to go over large clusters of drift wood, and some of the beach sections involved hiking over slippery rocks, but otherwise the rest of the day wasn't too strenuous. 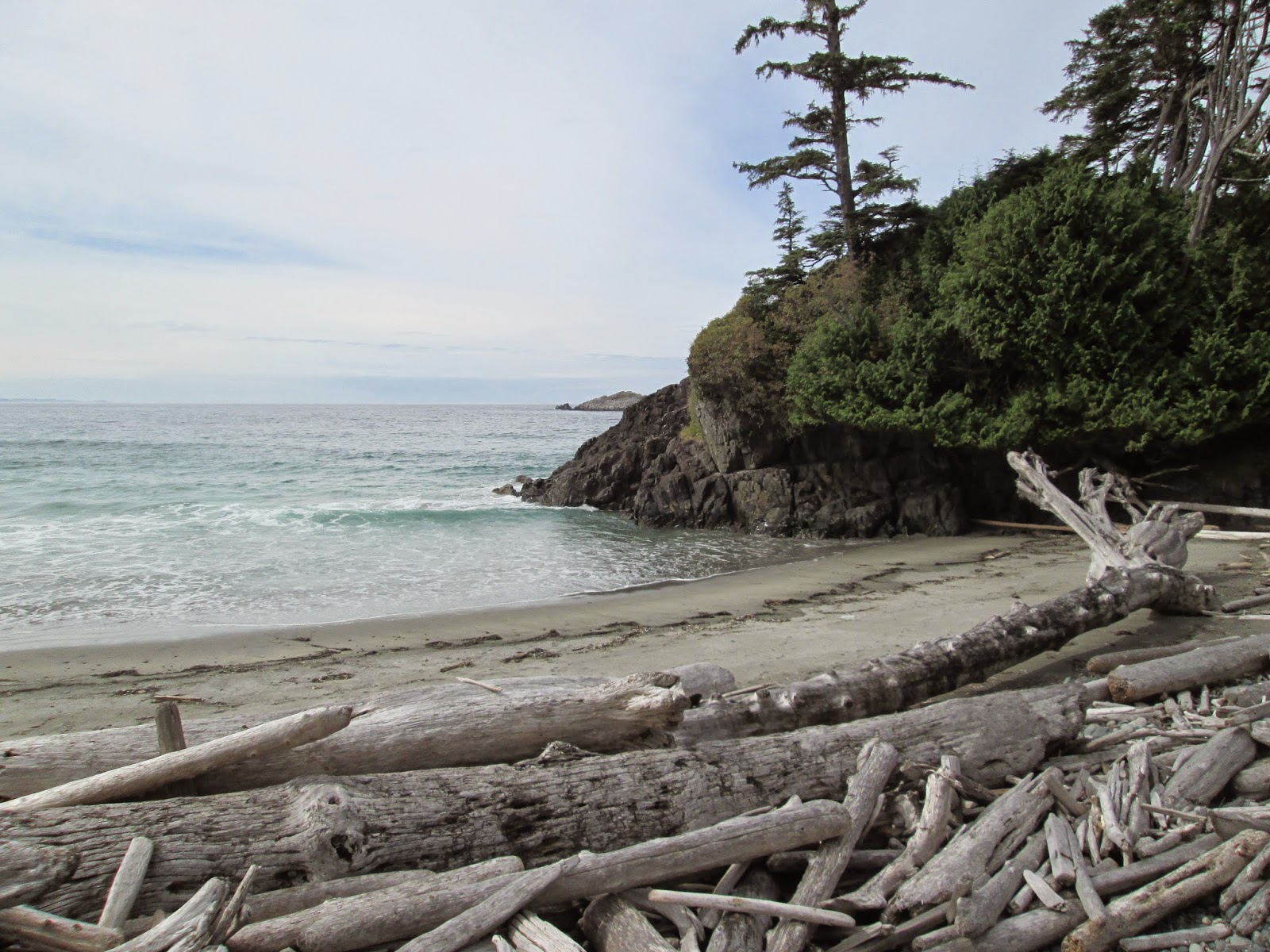 I got to Shuttleworth Bight where the Irony Creek campsite was.  I stopped here, setting up with the luxury of a tent pad again.  As some pretty dark clouds had blown in, I didn't spend too much time on the beach, going to bed pretty early.  I took my socks off and immediately told myself not to think of the state of my feet.  Being the bright fellow that I am, I never really dumped my boots out after the river crossing, or tried to dry my socks, so I was hiking in wet boots all day (that whole waterproof thing works both ways apparently).

Some light rain came in later on, quickly turning to heavy rain.  This was the first good storm I had set my Big Agnes tent up in, and it held up remarkably well, despite once again not being properly staked.

I fell asleep knowing that the next day, in which I would attempt to hike all the way to the end of the trail at Nissen Bight, would be my longest day on the trail.  I hoped my body, which was quickly getting very beaten up, would hold out. 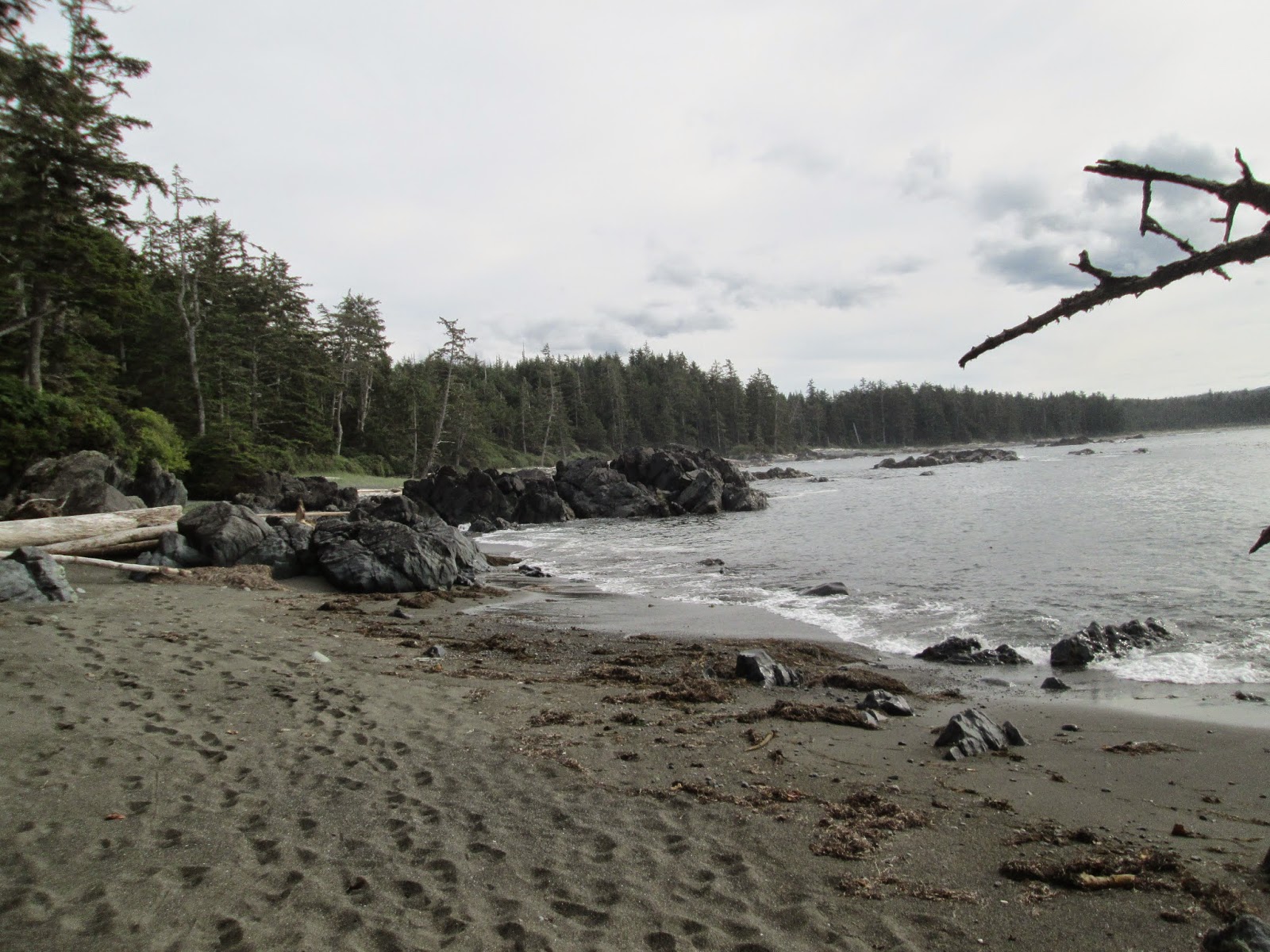 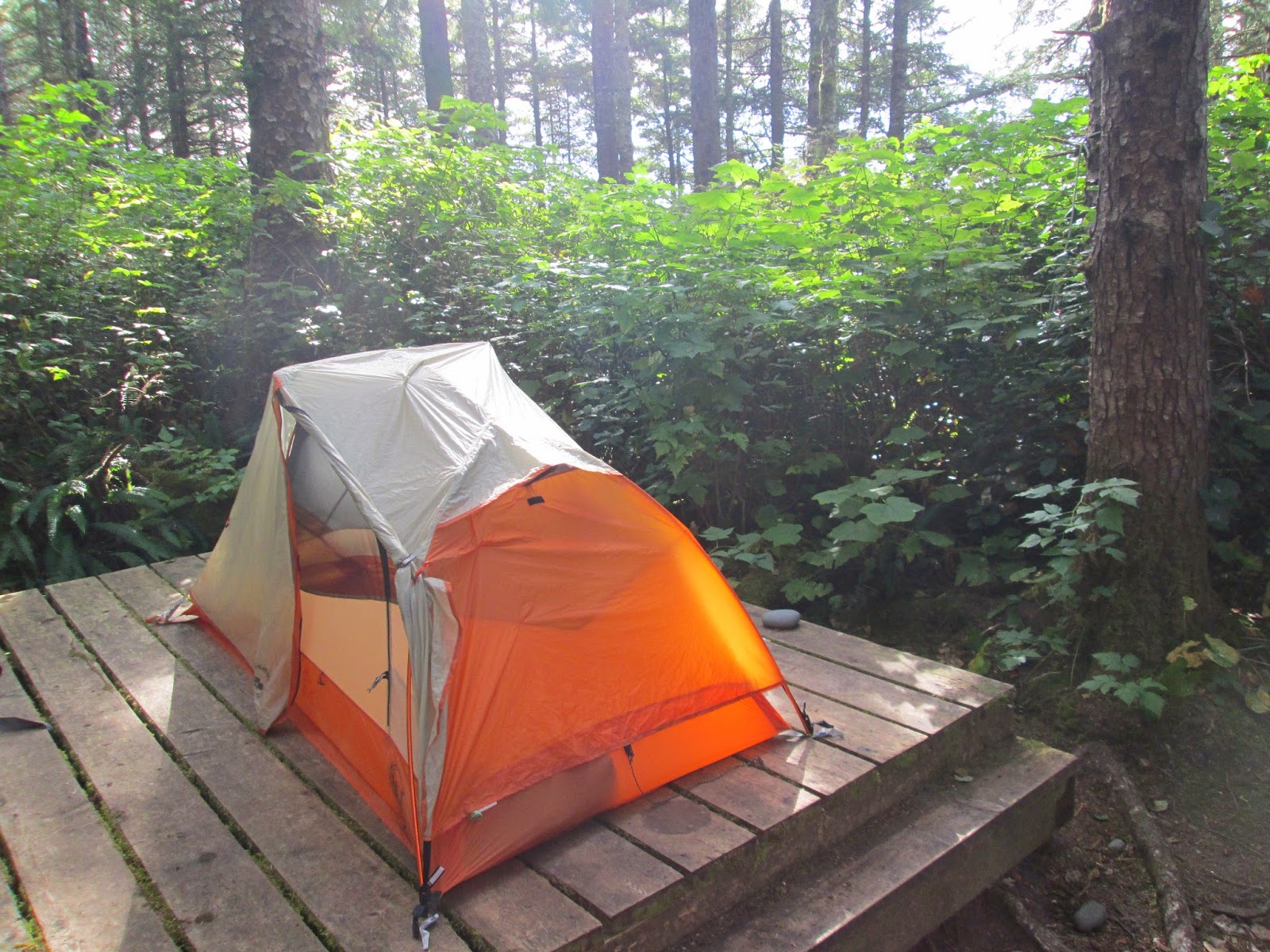