I woke up to to find one of the most frightening things I have ever seen: a fresh pile of cougar scat, right next to my tent.  For once, the rustling I heard at night was not just a squirrel!  I knew immediately that I would never be able to comfortably sleep in a tent again.

I took my tent down one last time, taking care not to get the scat on the tent.  I was a touch conflicted since I wanted to get a late start, as my shuttle was leaving Port Renfrew at 5:00 PM and I didn't want to be waiting in town for too long, but I didn't want to linger in the woods, knowing there was potentially a cougar on the prowl. 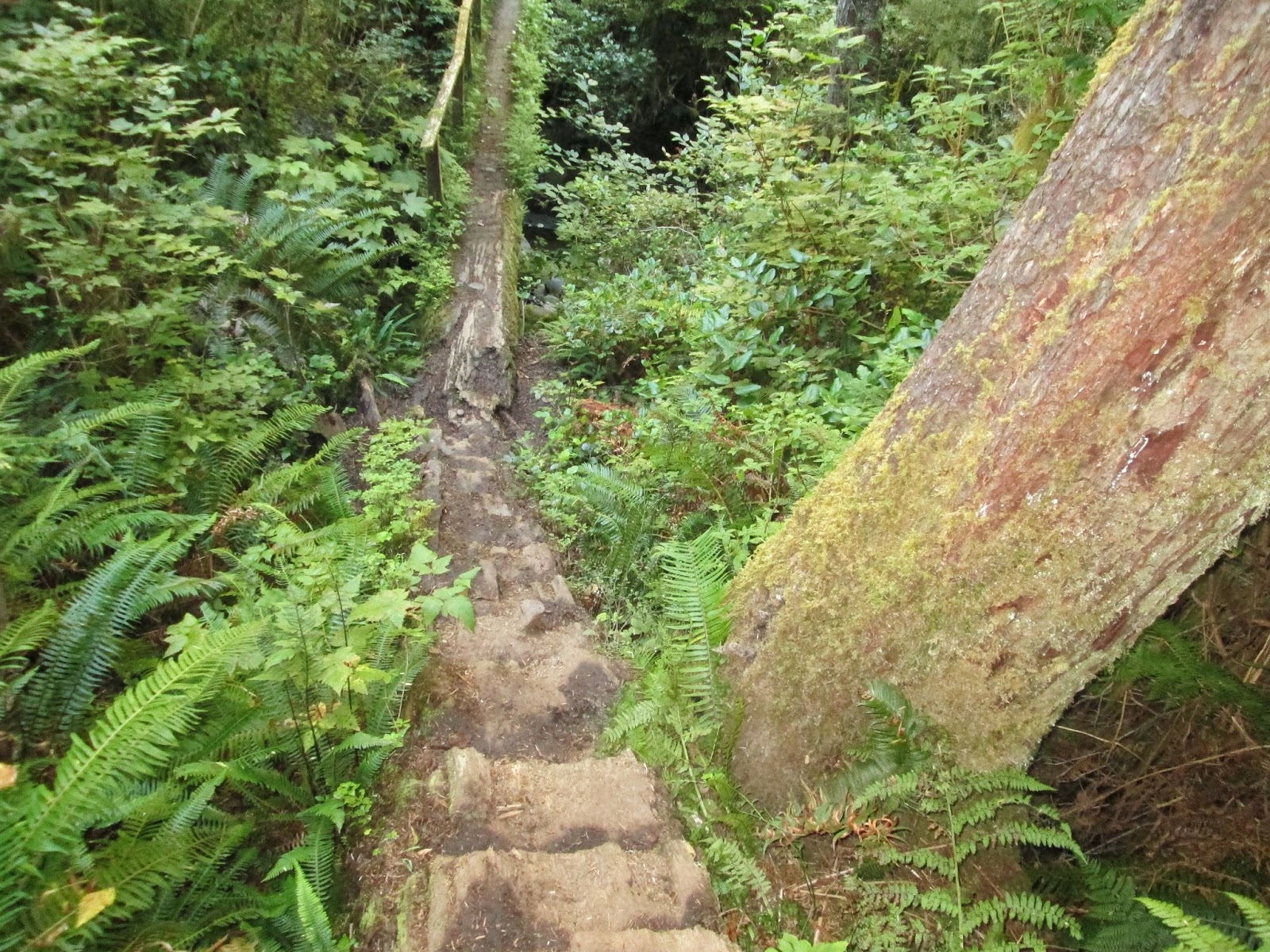 I left around 10:30 PM and started on the last 7 km of the Juan de Fuca Marine Trail.  I came to a junction where a trail to "Providence Cove" split off.  I was already well ahead of schedule, so I took this side trail.  The trail itself was very overgrown and bushy, but it was well worth the little trek.  Providence Cove was a really nice location, probably one of the highlights of the trail in my opinion.

Back on the main trail, I began to make the same realization I had made on the North Coast Trail: I was extremely close to completing the Juan de Fuca Trail without having a single fall!  This seemed very impressive, especially for a guy who calls himself "Clueless Hiker".  Naturally, right around the time I started thinking this, I got my foot caught in a tree root and had a spectacular fall, nearly going off the trail into some very pokey looking bushes.  This fall was definitely hard enough to make up for my lack of falling from the previous couple of weeks. 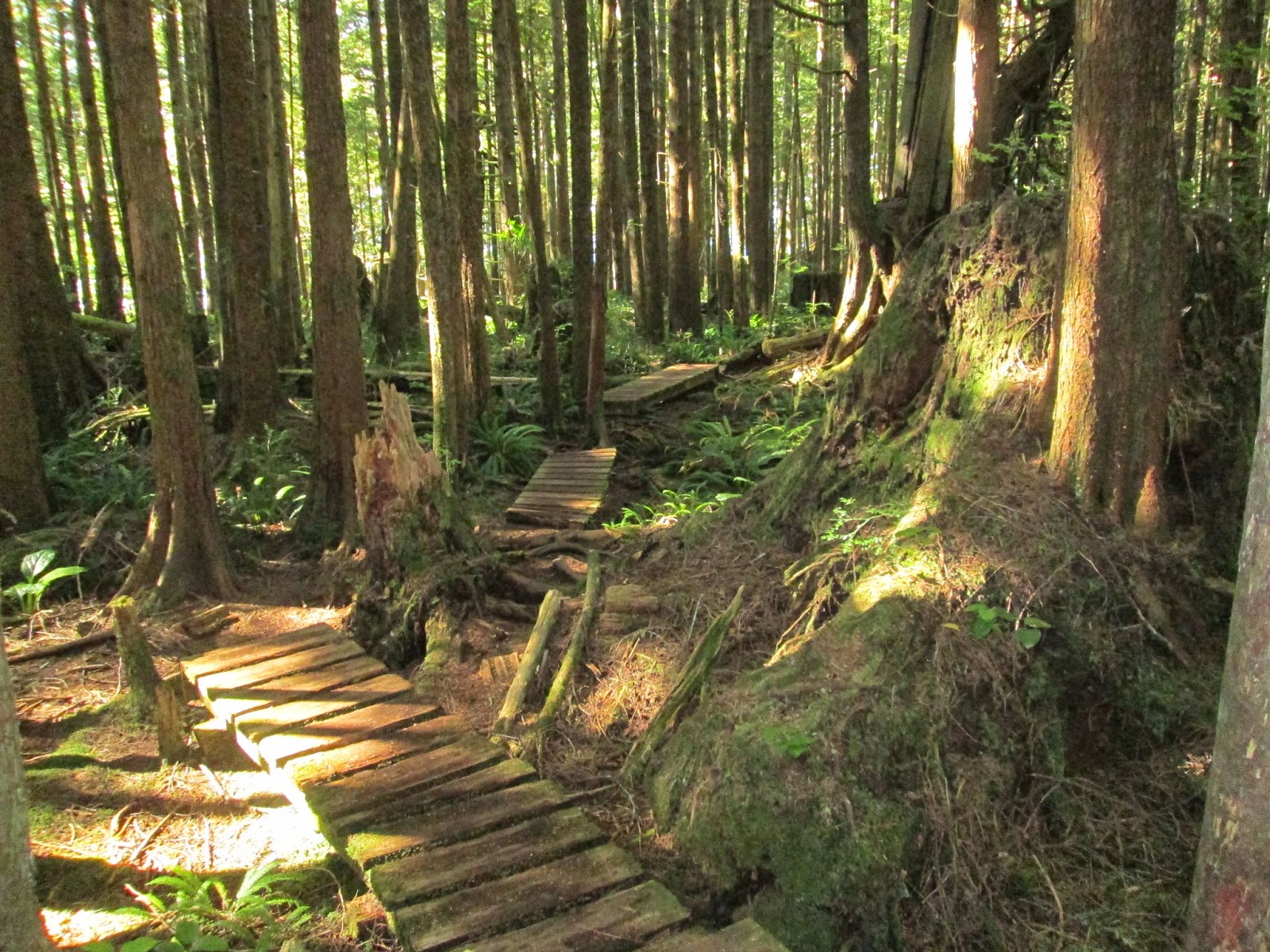 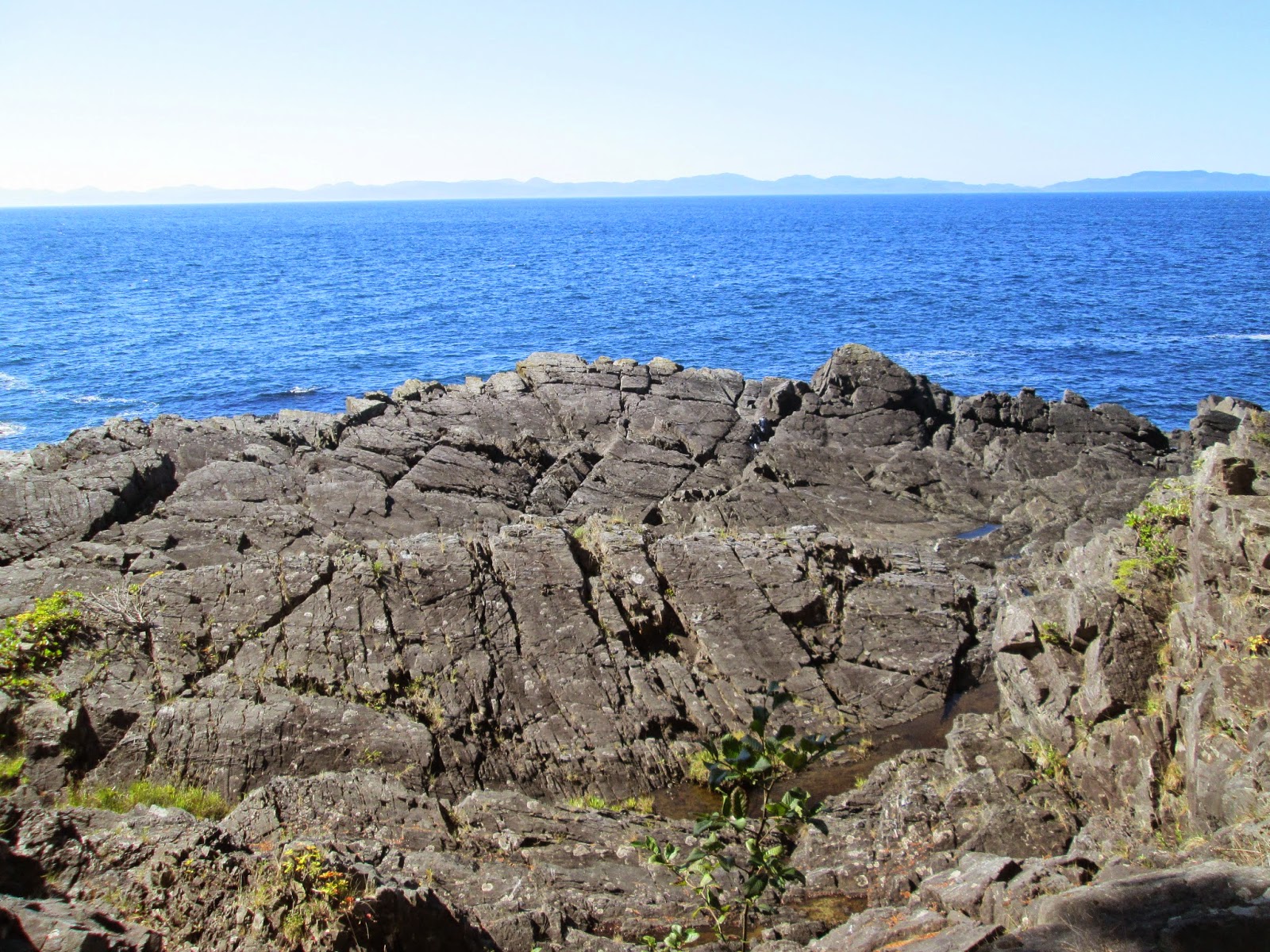 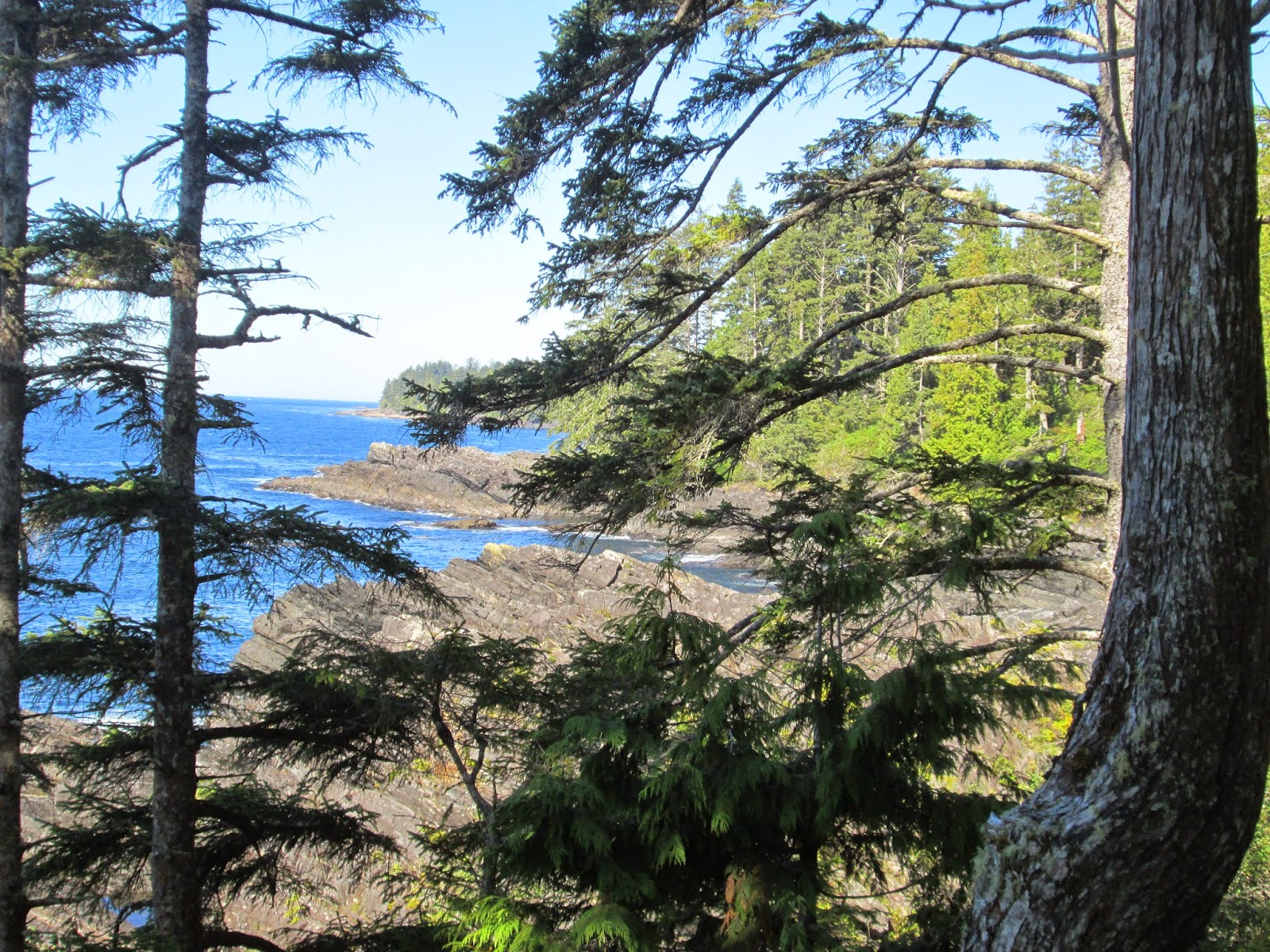 The rest of my hike was fairly uneventful.  I could soon see Botanical Beach coming into view, and I knew my hike was almost over.  The trail stayed pretty easy, with lots of sections covered with boardwalk.  I nearly had another fall on a boardwalk which would have been really embarrassing. 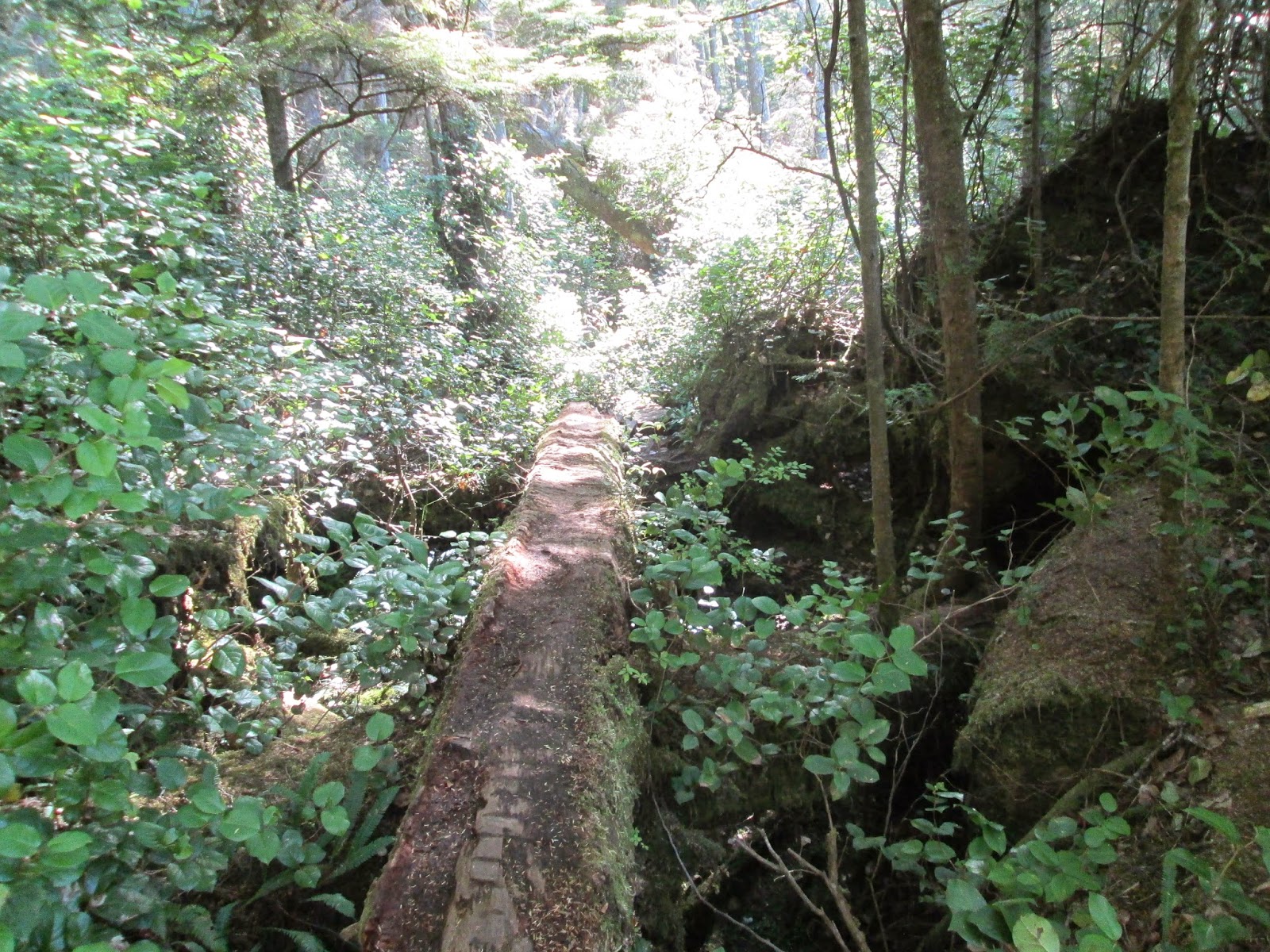 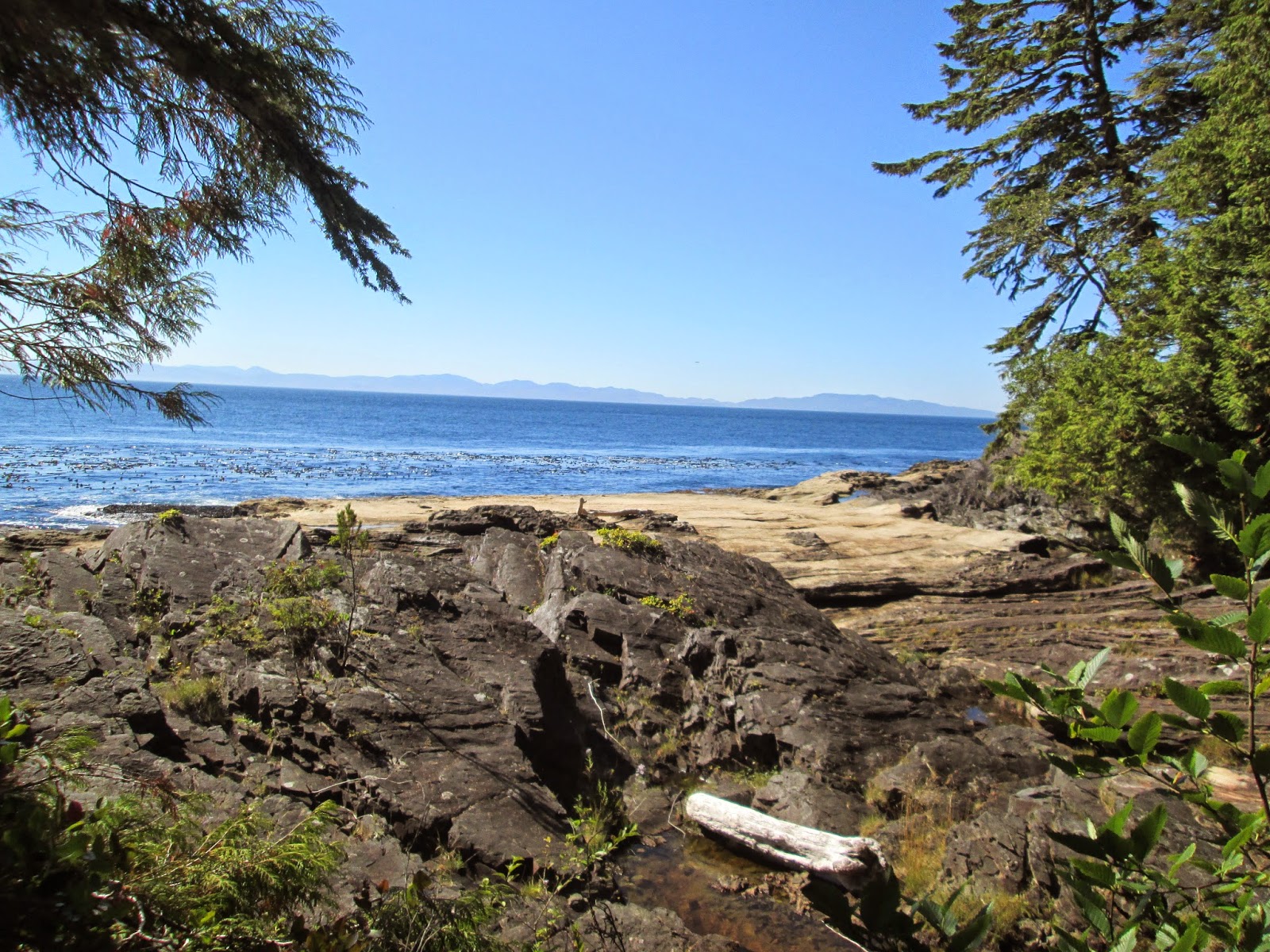 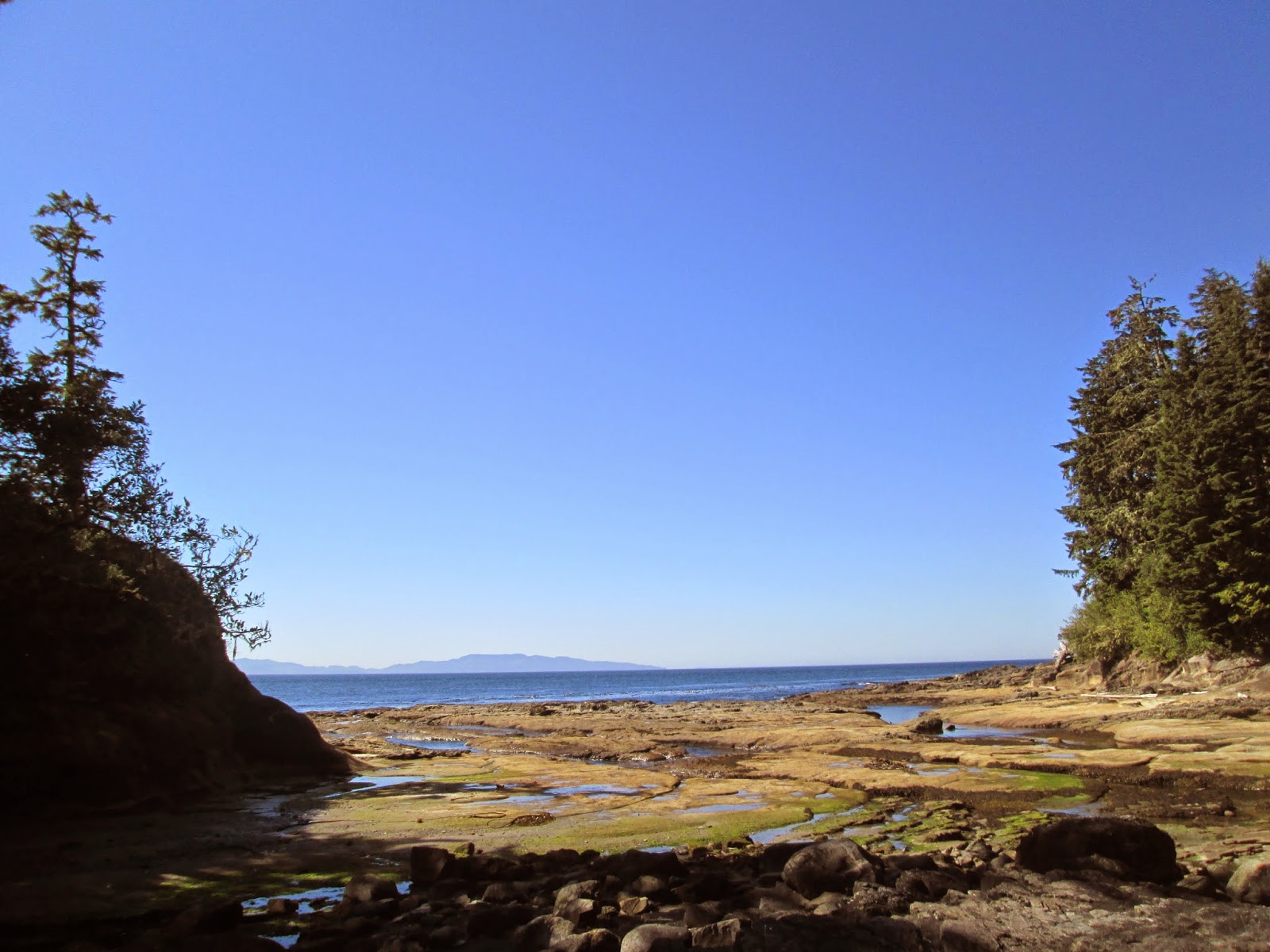 I came to the last kilometer of the trail, where the Botany Bay Loop split off.  I hiked down to Botanical Beach, and then hiked the long way to the parking lot, passing by Botany Bay.  In my opinion, this area was the single nicest and most scenic area on the entire Juan de Fuca Trail.  The area had some very vivid colours and fascinating rock formations. 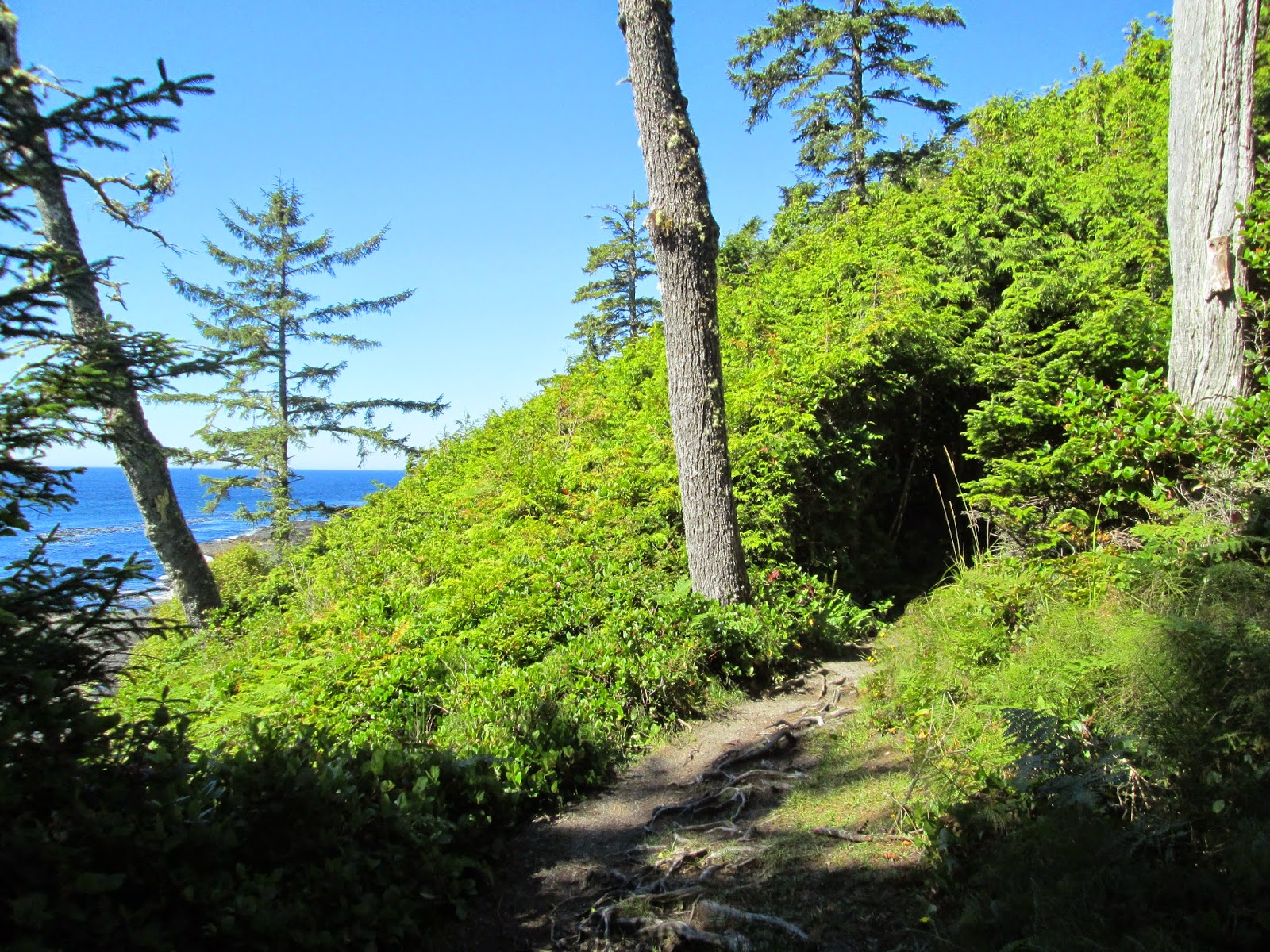 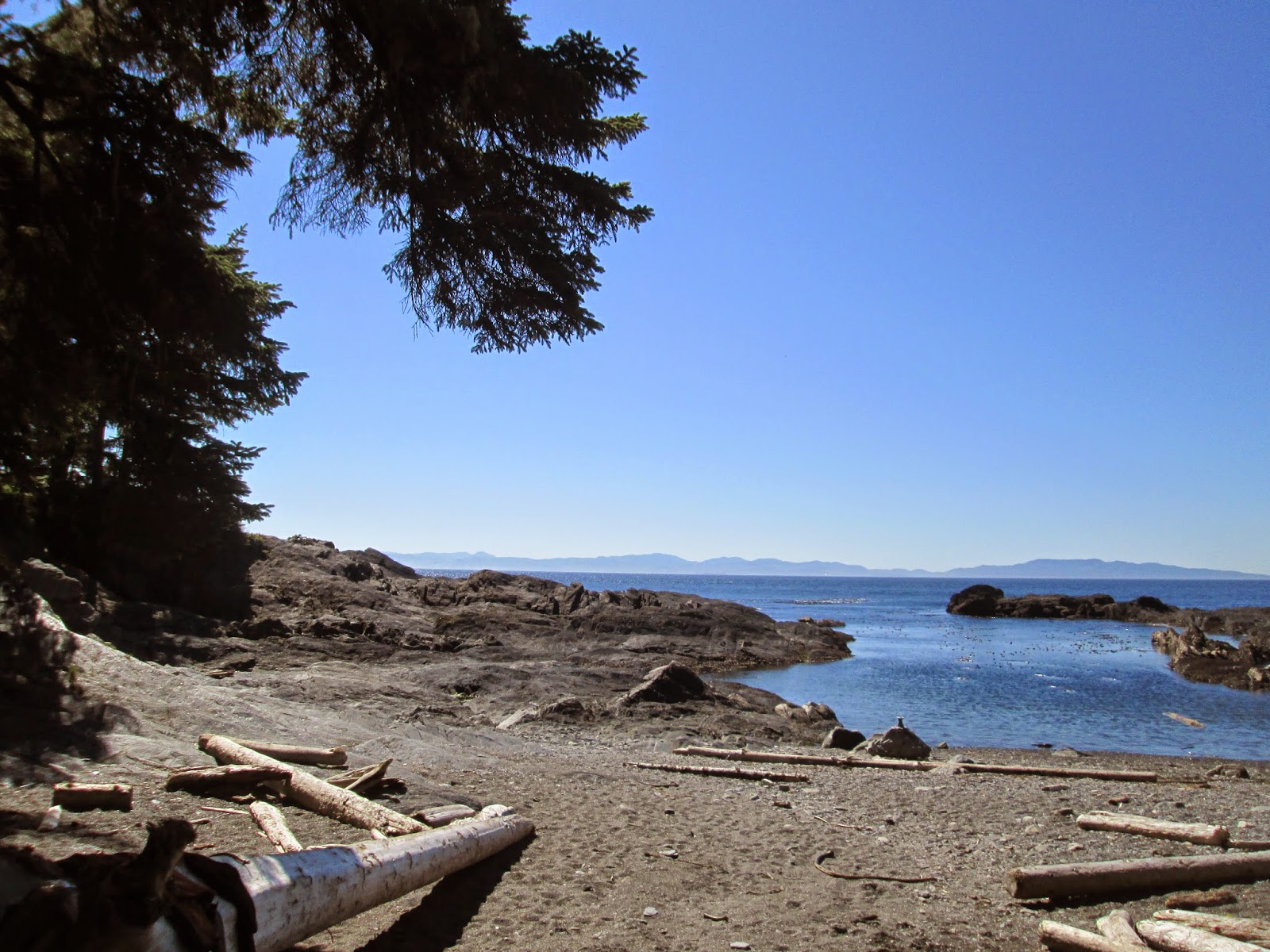 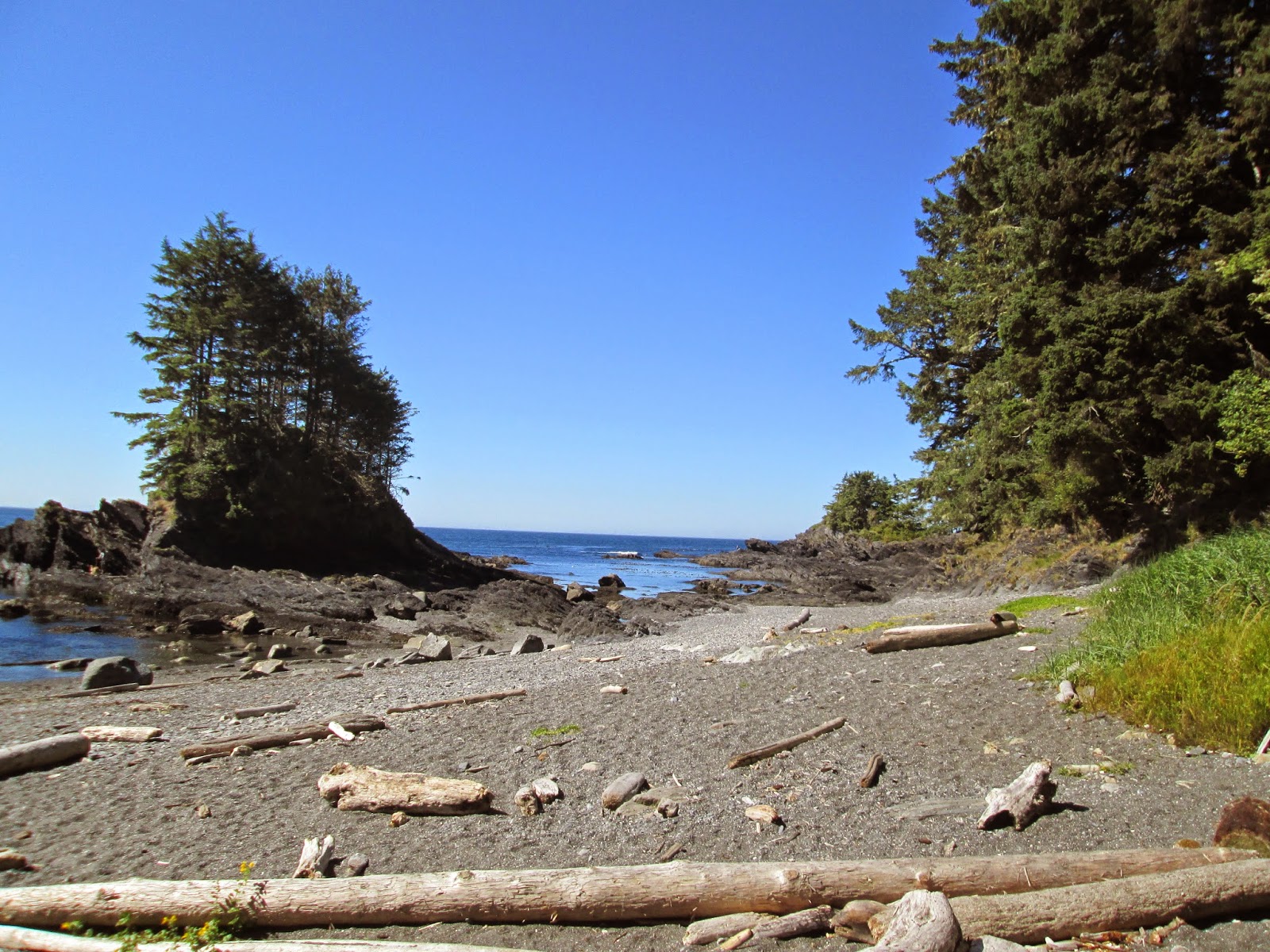 After passing Botany Bay, the trail widened out and began a gentle climb to the parking lot.  Looking at my clock, I was even further ahead of schedule than I had anticipated, so I knew I was going to have a very long wait in Port Renfrew.  At least I could look forward to a hot and filling meal. 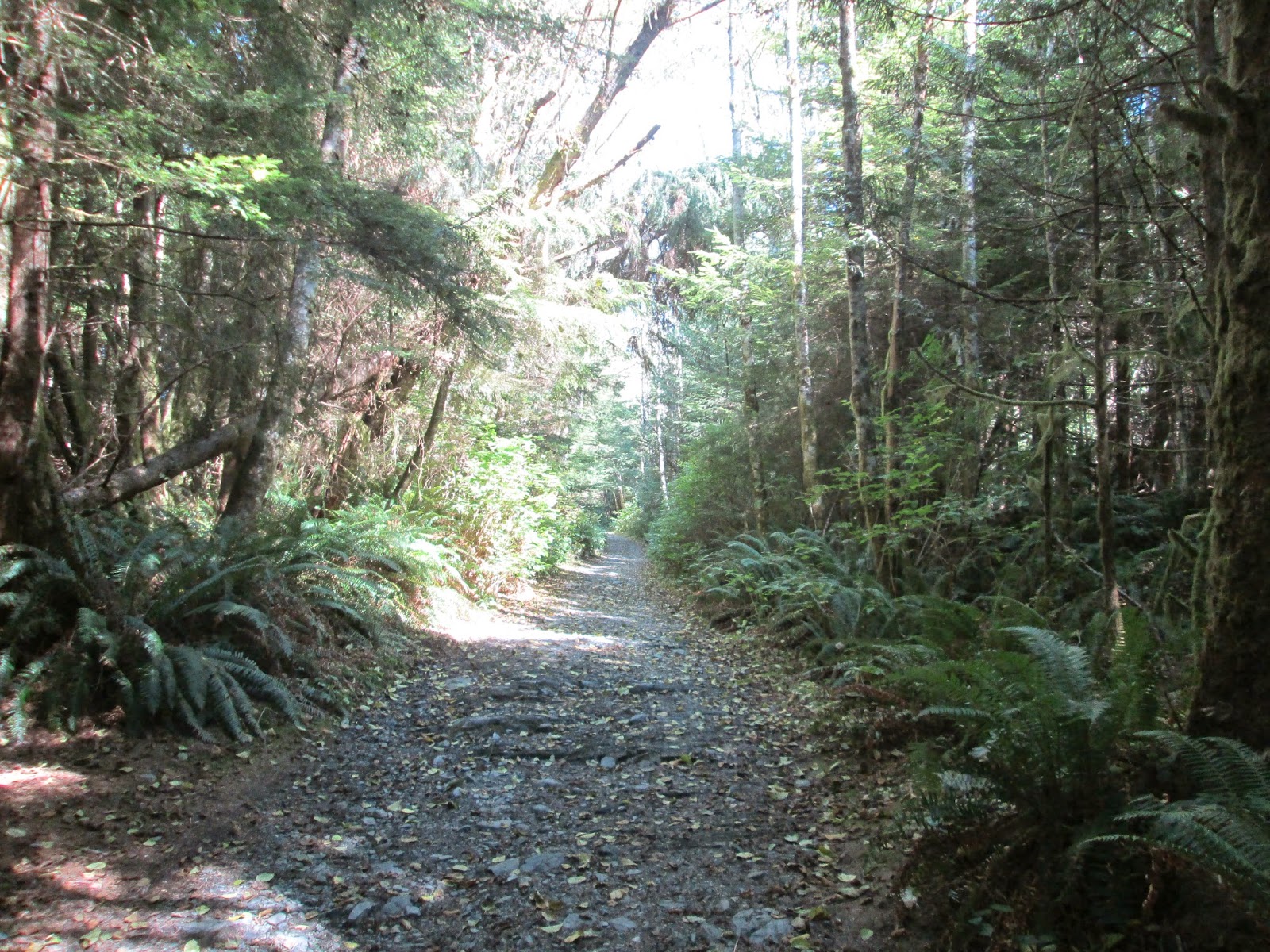 I finally reached the end of the trail, completing my North Coast Trail/Juan de Fuca Trail double hike.  I was exhausted, but I definitely was glad I took on this challenge.  It was extremely fulfilling and rewarding, and gave me chance to see parts of the province I hadn't seen before.

I wasn't technically done yet, as I had a couple of kilometers to walk on the road into Port Renfrew.  Somehow, this ended up being the hardest kilometers of the entire trip.  The hard pavement did more damage to my feet than over one hundred kilometers of rugged coastal hiking.  This is why I could never pull a Forrest Gump and go across the continent.

In Port Renfrew I went to the Coastal Kitchen Cafe, the same restaurant me and my Dad went to when we finished the West Coast Trail.  The food was just as good as I had remembered.  After eating, I went to wait for the shuttle bus.  A local told me the bus was going to be a couple of hours late, so I went for a bit of a walk around Port Renfrew, going to the West Coast Trail registration office and back.  It sucked having to wait, but there was a multitude of blackberries that were just waiting to be picked, so that made the time fly.

The bus eventually showed up and drove me back to Victoria.  The next day I departed for Princeton, having to take three buses, two skytrains, and a ferry.  It was easily the most stressful day of my trip.  I felt like something was destined to go wrong, but everything went smoothly (though I did get a good scare when I saw that the normal trains were not stopping at the Main Street station in Vancouver).

The whole trip was one of the best experiences of my life, and I am definitely glad I did it.  I have a special appreciation for Vancouver Island now, and want to return in the future to hike more of it (perhaps the Nootka Trail, or the Spine Trail when it is finished).