Just 2 days after finishing the North Coast Trail (NCT), I was on the West Coast Trail Express traveling from Victoria to China Beach.  I had wanted to do the Juan de Fuca Marine Trail (JDFT) for some time, but I had not really had a good opportunity until now.  Already making my hiking plans for 2015 and 2016, I knew that I probably wouldn't have another opportunity to do a big hike on Vancouver Island for a while, so I made the decision to do the NCT and JDFT back to back.

The JDFT is a 47 km long trail on the west coast of Vancouver Island.  It follows the Juan de Fuca straight, affording many great views of the Olympic Peninsula.  The southern terminus of the trail is at China Beach, while the northern end is at Botanical Beach, just outside of Port Renfrew.

The benefit to doing the JDFT after a pretty strenuous hike was that I was in peak physical condition, so I was able to cover a fair amount of ground.  Due to time constraints, I was only going to have 3 days to finish the trail, so being able to make big(ish) kilometers was going to be key.

I got dropped off on the highway at the turnoff to China Beach and hiked down to the parking lot.  I paid my camping fees and started down the trail.  I was a little sleepy, so I didn't realize that the trail wasn't going to actually go to China Beach, so I ended up missing out on it.  I've heard it is a really nice beach, so I guess it gives me something to return to the area for.

It became apparent fairly quickly that this was going to be a very different experience from the NCT.  The trail meandered through fairly flat terrain in what seemed like a secondary forest.  The trees were not packed together all that tightly, and there was not the same abundance of shade-loving plants like ferns that I had seen in other parts of Vancouver Island.

The one thing that made it very, very clear that this was not exactly a true wilderness experience was the sounds of the highway in the background.  It got quieter as I progressed along the trail, but I could faintly hear it most of the way to Mystic Beach.

A bit of hiking brought me to the first of four suspension bridges on the trail.  I was impressed by the bridge; it seemed very sturdy and well put-together.  I was fairly certain however, that it would be awful to try to cross in the rain.  It struck me that it could get very, very slippery.  Fortunately I was surrounded by bright blue, cloudless skies, so that wasn't even a remote concern for me. 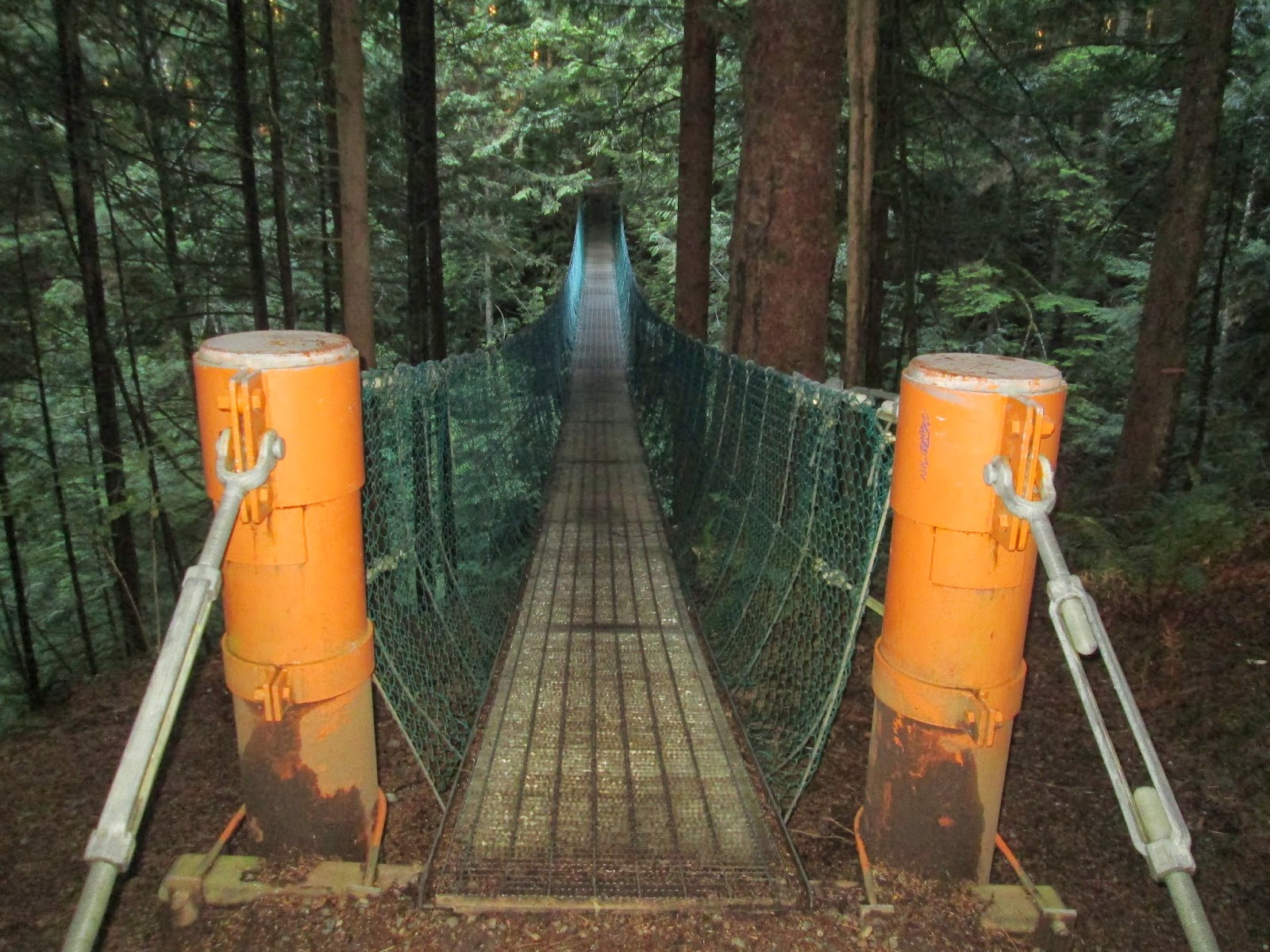 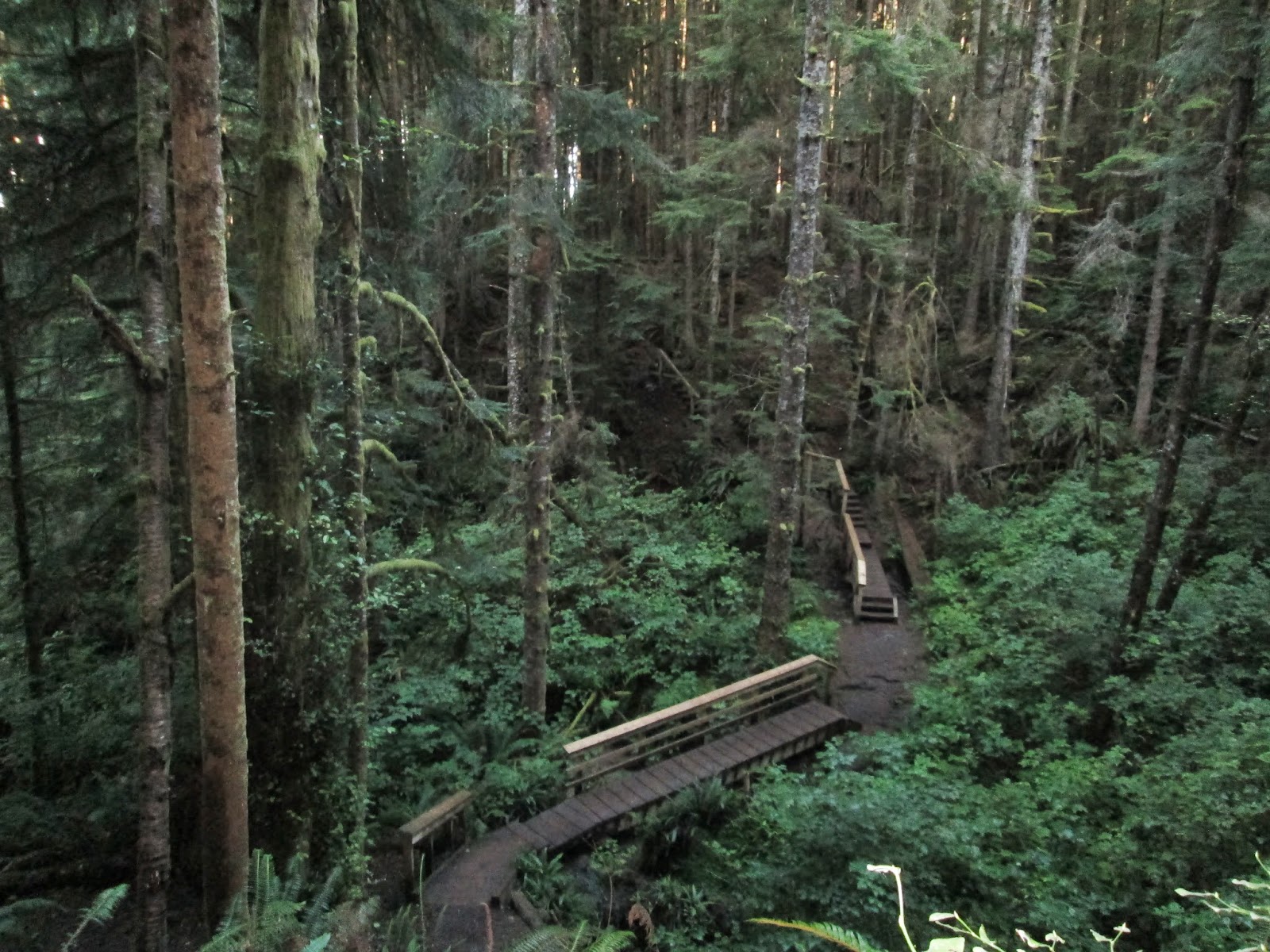 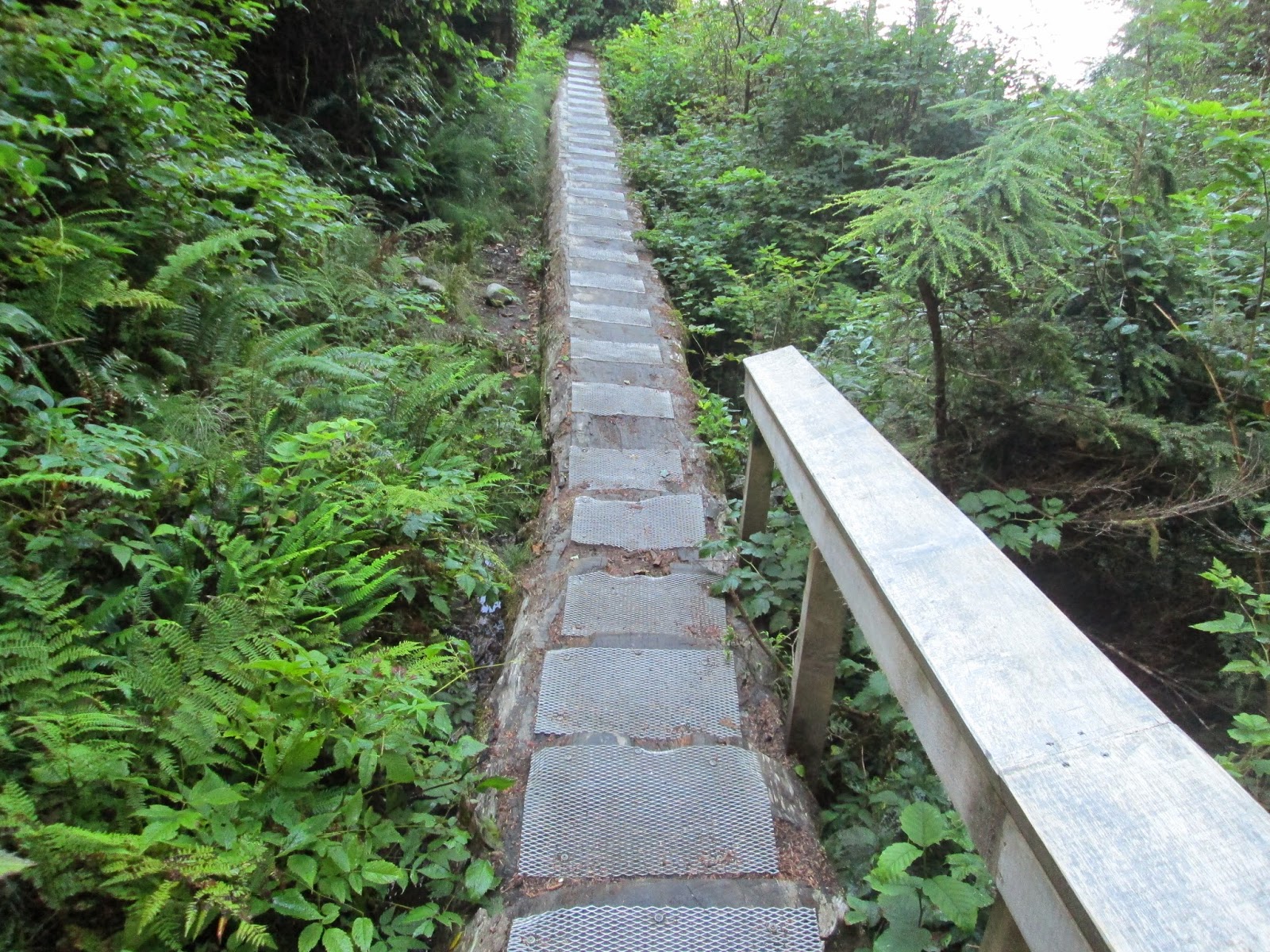 In what seemed like no time, I was at Mystic Beach, 2 km into the trail.  The early morning mist was still lifting, so it gave the beach a very eery appearance.  I spent some time exploring the beach, fascinated particularly with the cliffs that lined it. 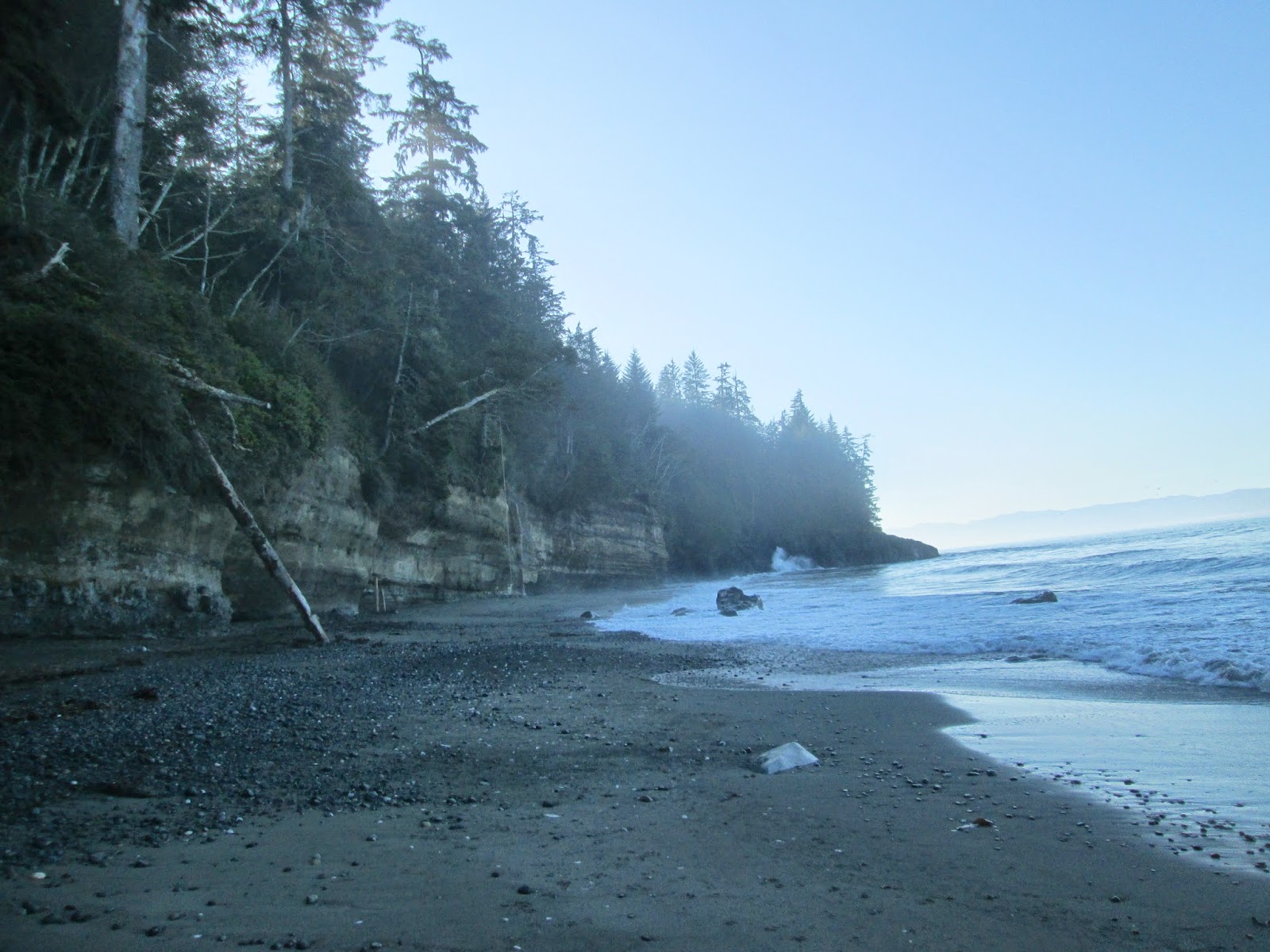 I hiked along the beach, eventually getting on an inland trail again.  The trail remained fairly easy as I worked my way towards Bear Beach.  While the section of the hike leading to Mystic Beach had been in the woods with little in the name of views of the ocean, this section never strayed too far from the coast, so I had many glimpses of the ocean and Olympic Mountains. 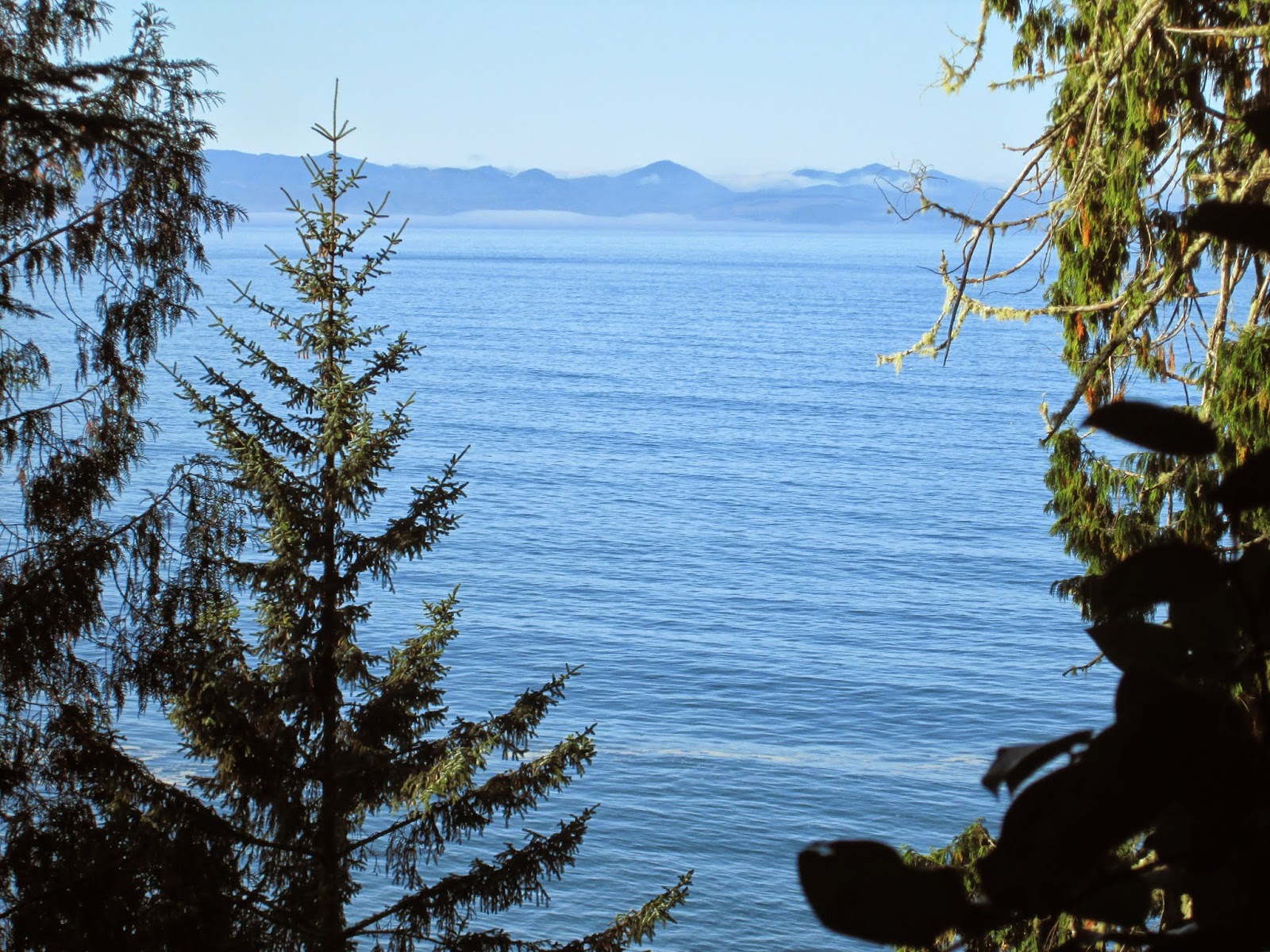 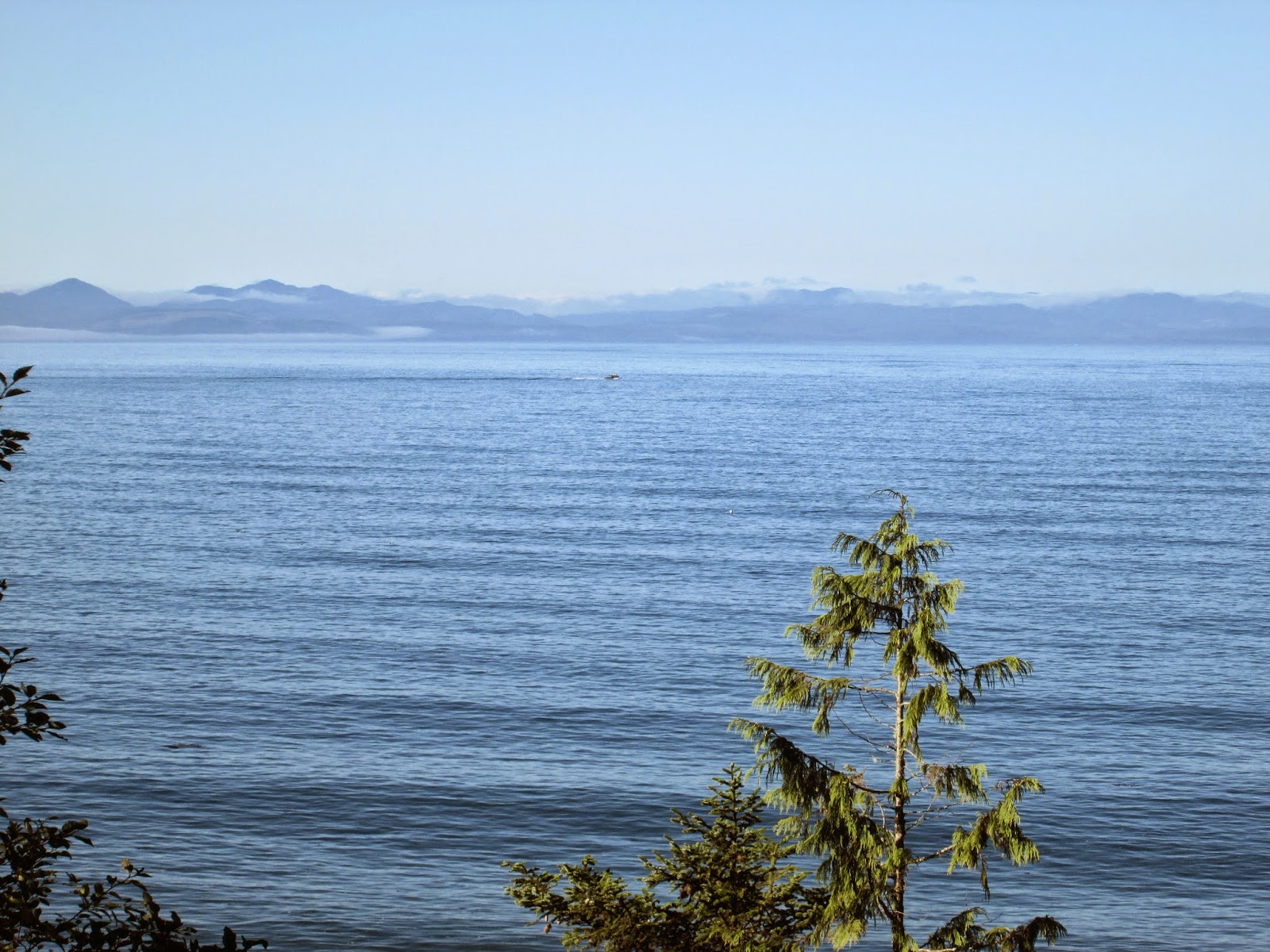 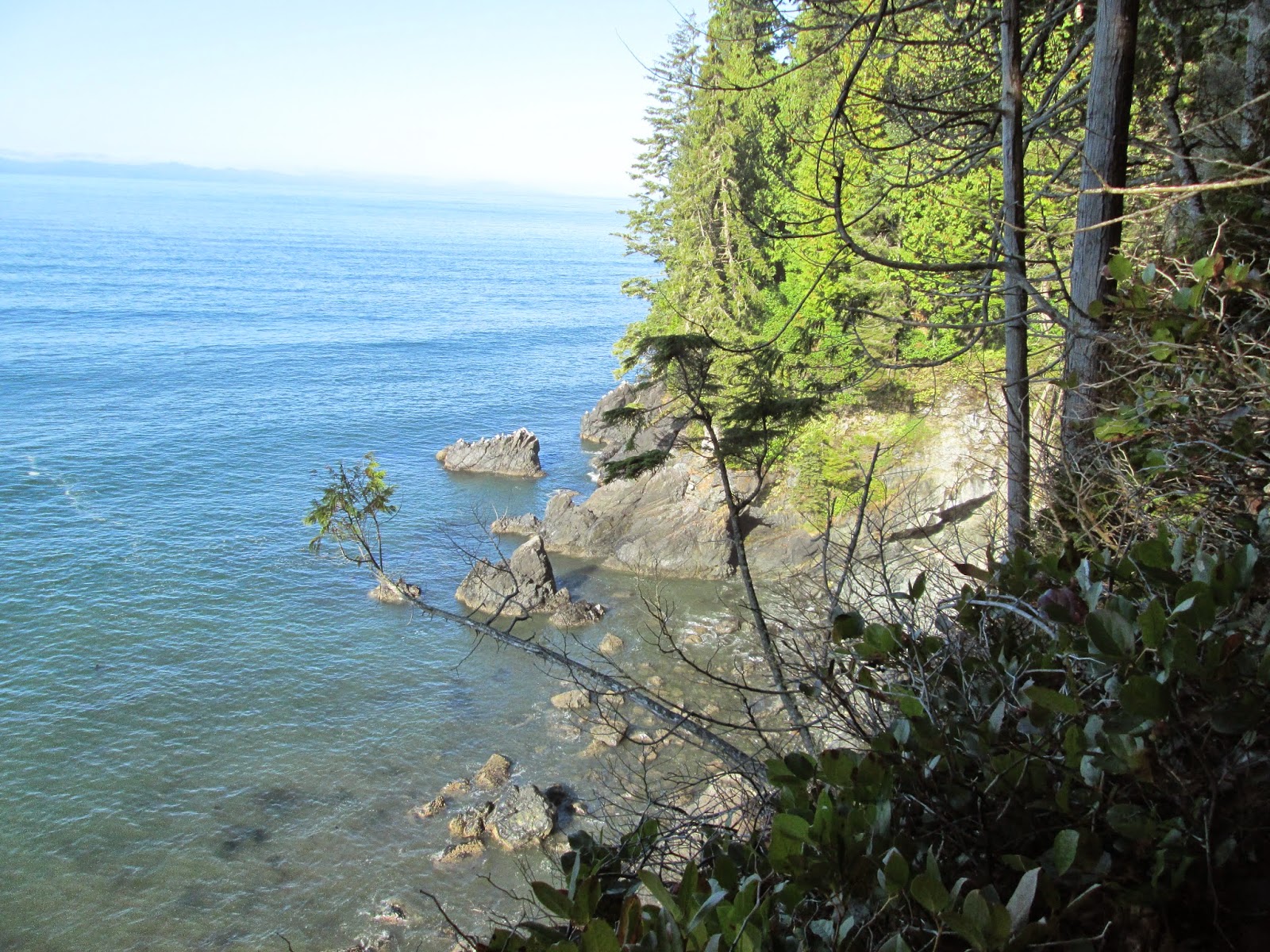 I encountered my first very small section of mud, but otherwise the trail to Bear Beach was pleasant and went by quickly.  My goal for the day was to make it to Chin Beach, 21 km in.  So far I was on pace to be there around 3:00 pm or so.  Given how easy the trail was, I knew I wouldn't have any difficulty getting there. 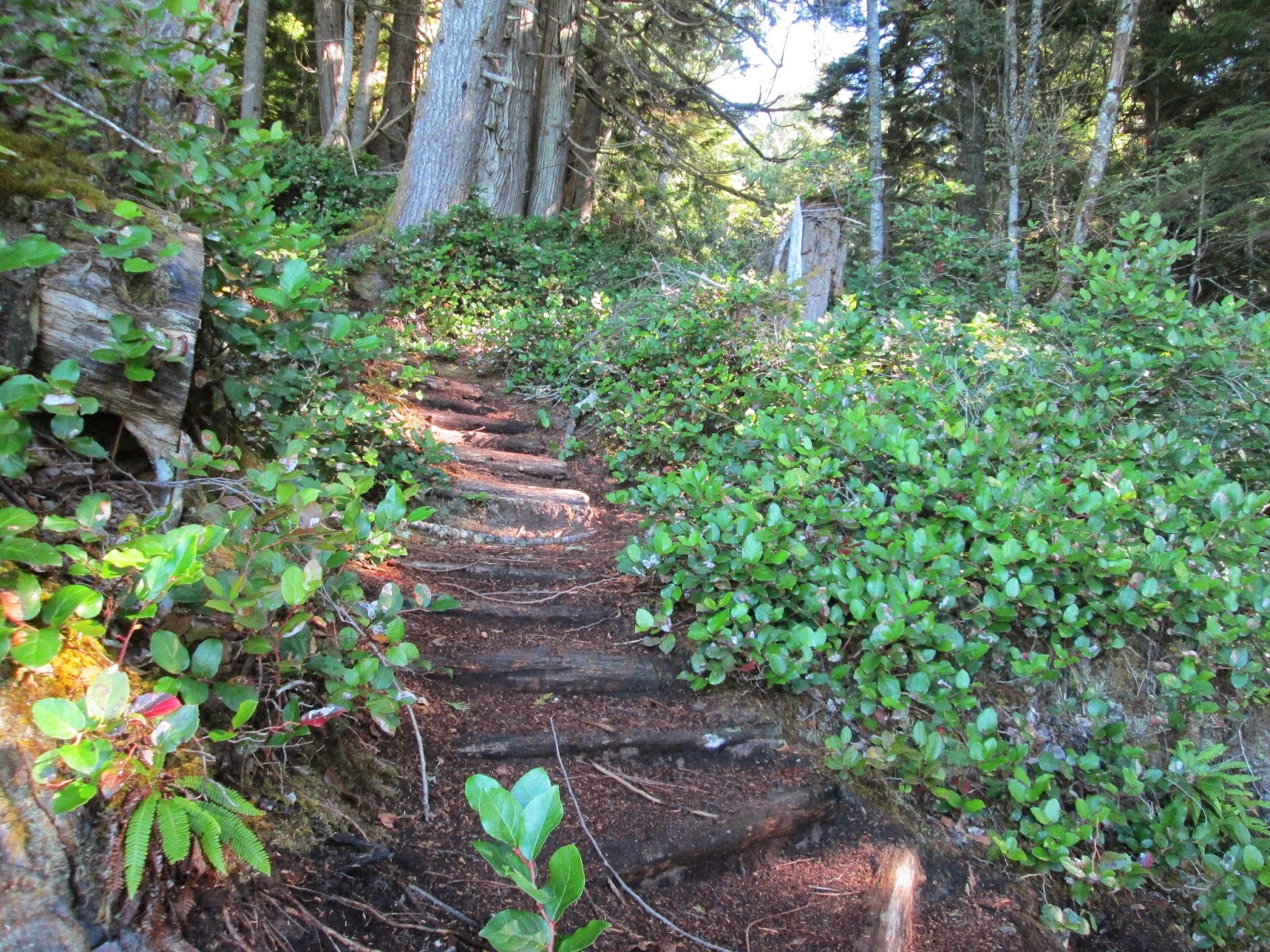 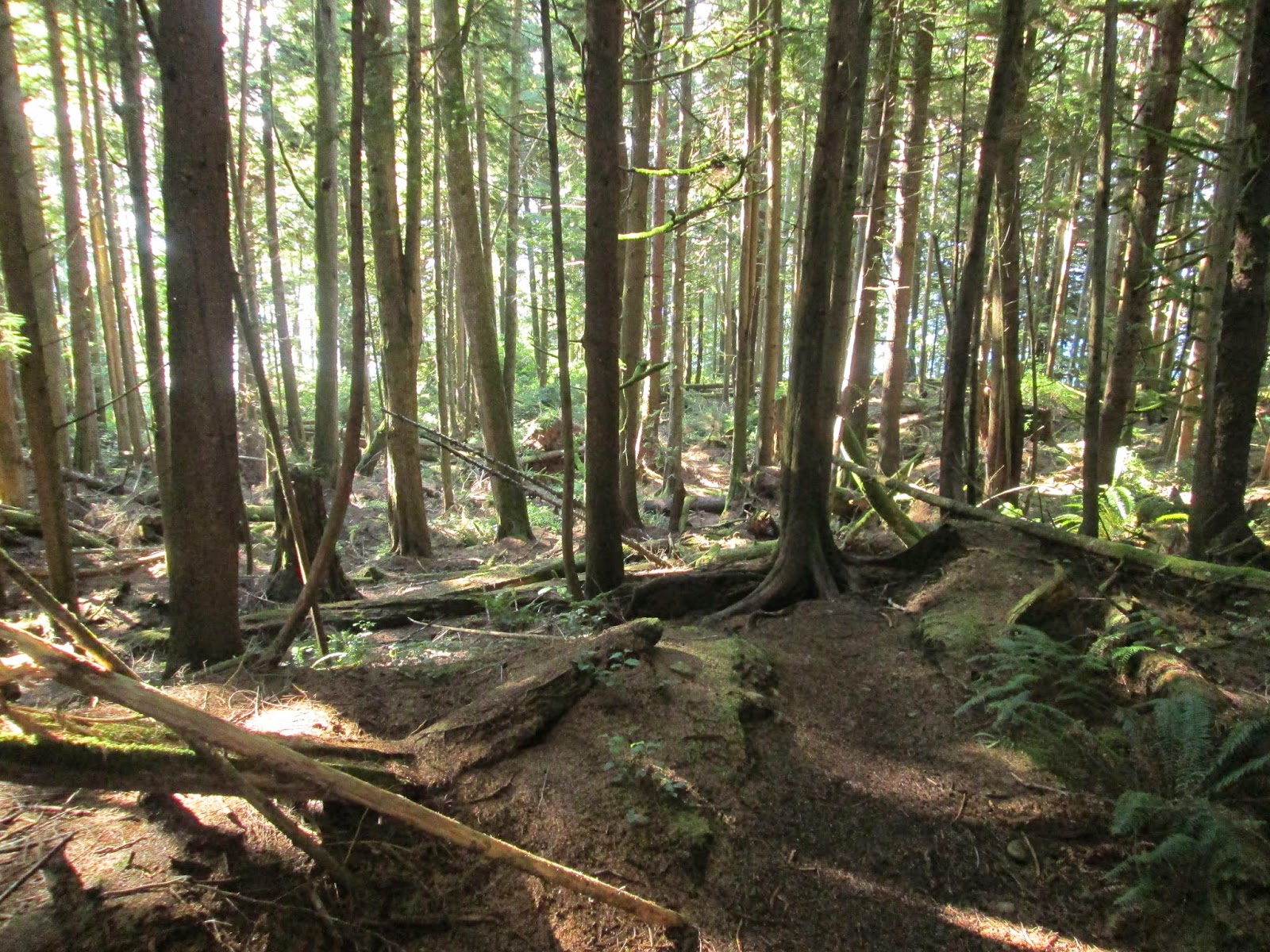 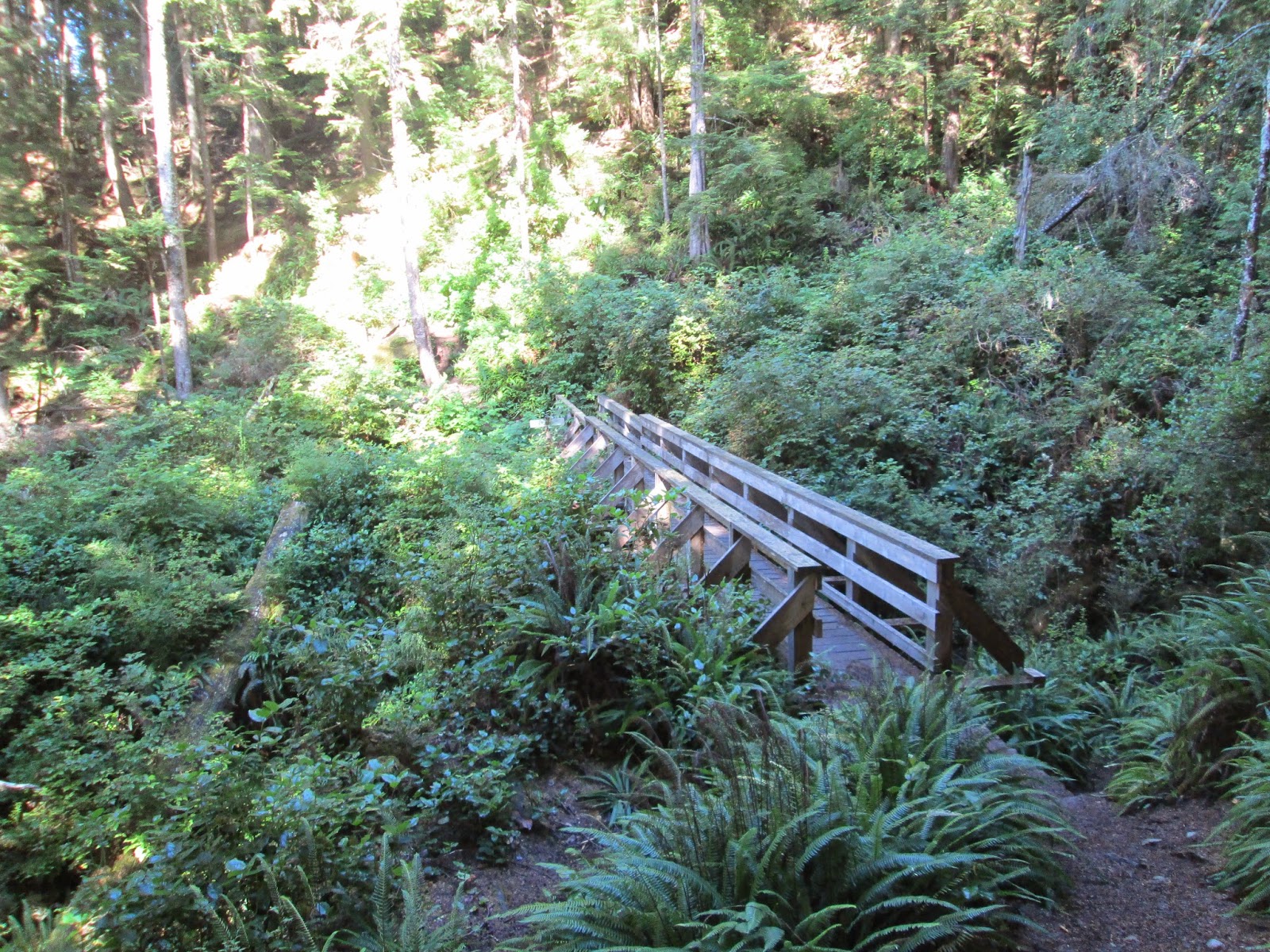 I emerged at Bear Beach and had lunch.  I still had my same tub of hummus from the NCT, and at this point, it had definitely started to go a bit funny.  I was too cheap to buy a new tub, so I made do with my expiring hummus.

After lunch, I hiked down Bear Beach, back to the inland trail.  I was a little surprised at how long the beach was.  At one point I thought I might have missed the cut-off because I was still in NCT mentality and was expecting something not necessarily well marked.  Fortunately, the JDFT cut-offs are really, really obvious, so I managed to find the trail pretty easily. 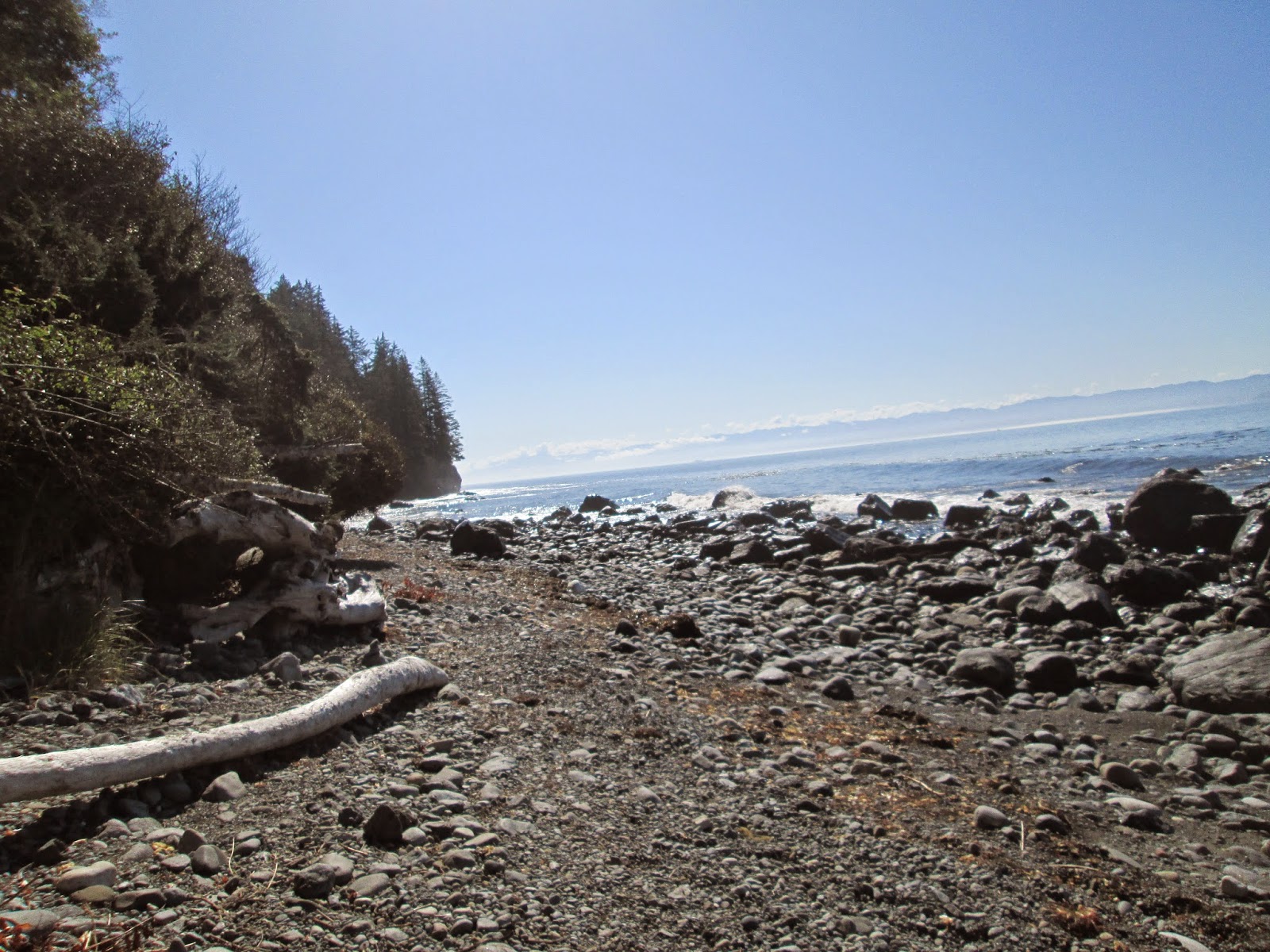 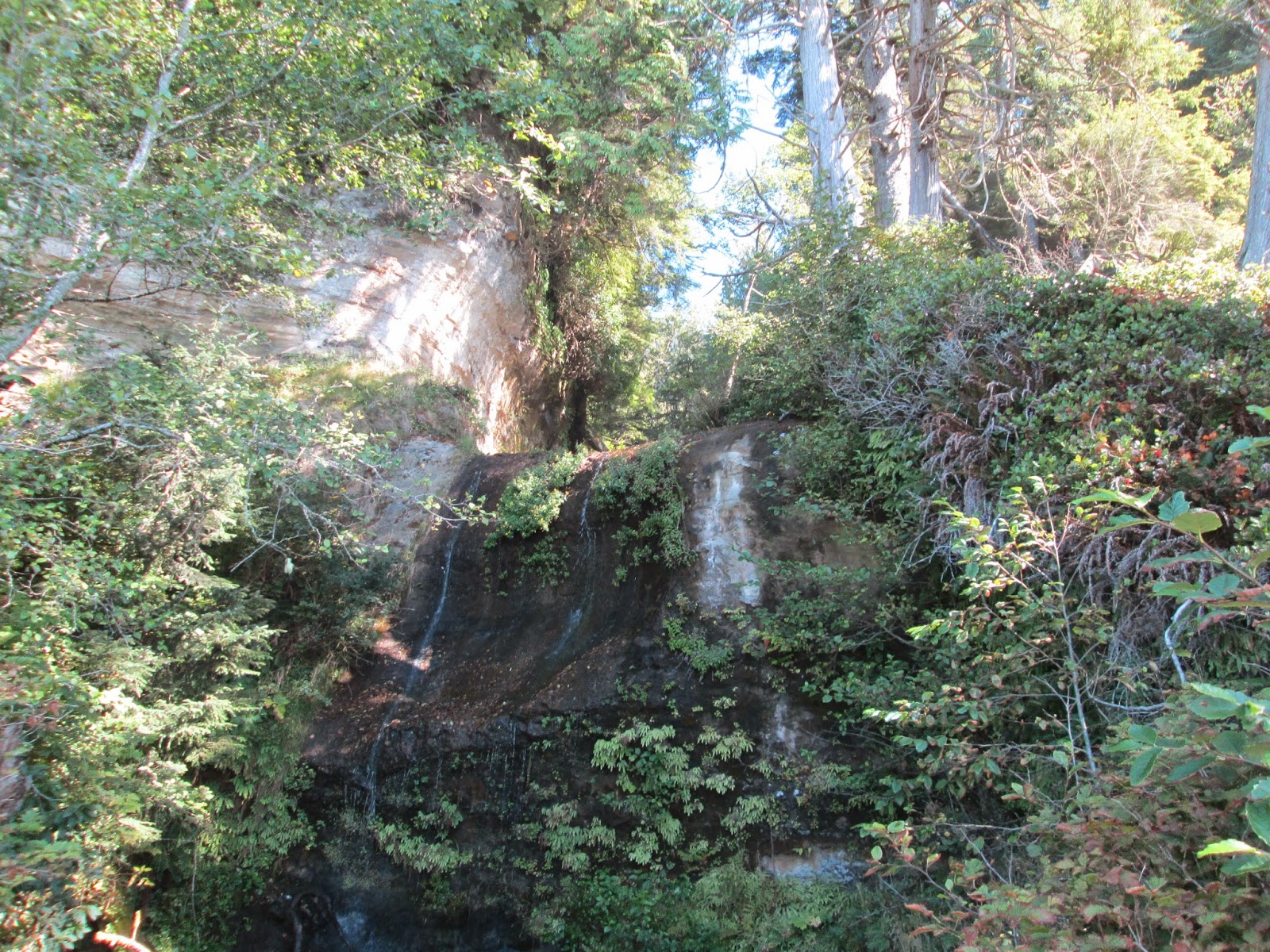 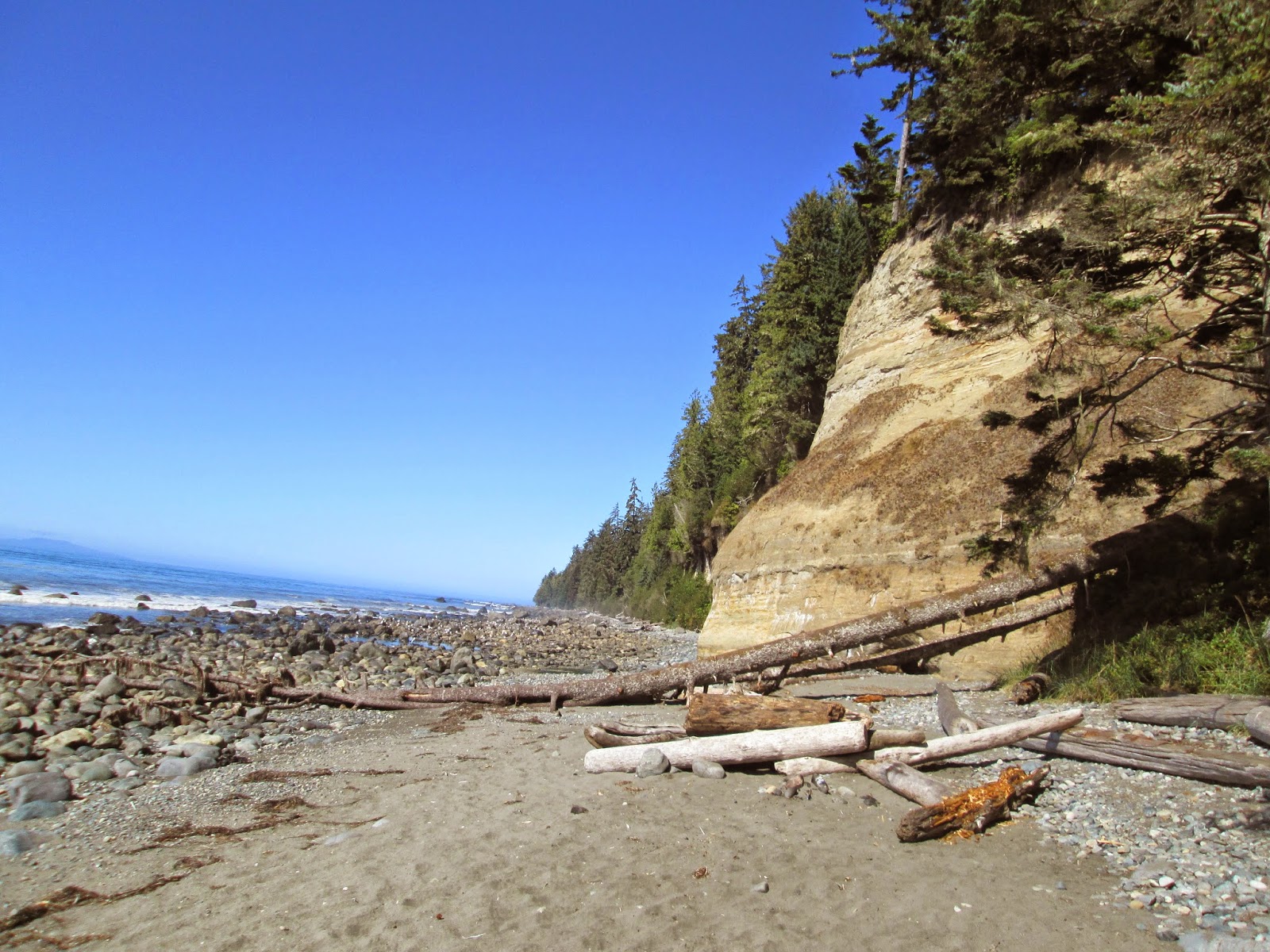 Back on the inland trail I looked at my map of the JDFT.  The section from here to Sombrio Beach was marked as "difficult", whereas the section I had completed was marked as "moderate".  I couldn't imagine the trail being all that difficult, so I trudged on with a touch of overconfidence.

In no time at all, any thoughts I had about being in peak physical condition were gone as the trail made long and steep ascents and descents, over and over again, kilometer after kilometer.  I was running out of breath faster and faster as I realized that this terrain was almost definitely steeper than anything on the NCT, and maybe even the West Coast Trail.  The trail itself was well constructed, so there weren't the same roots and fallen trees to climb over, but it still felt as challenging as some parts of the other two trails. 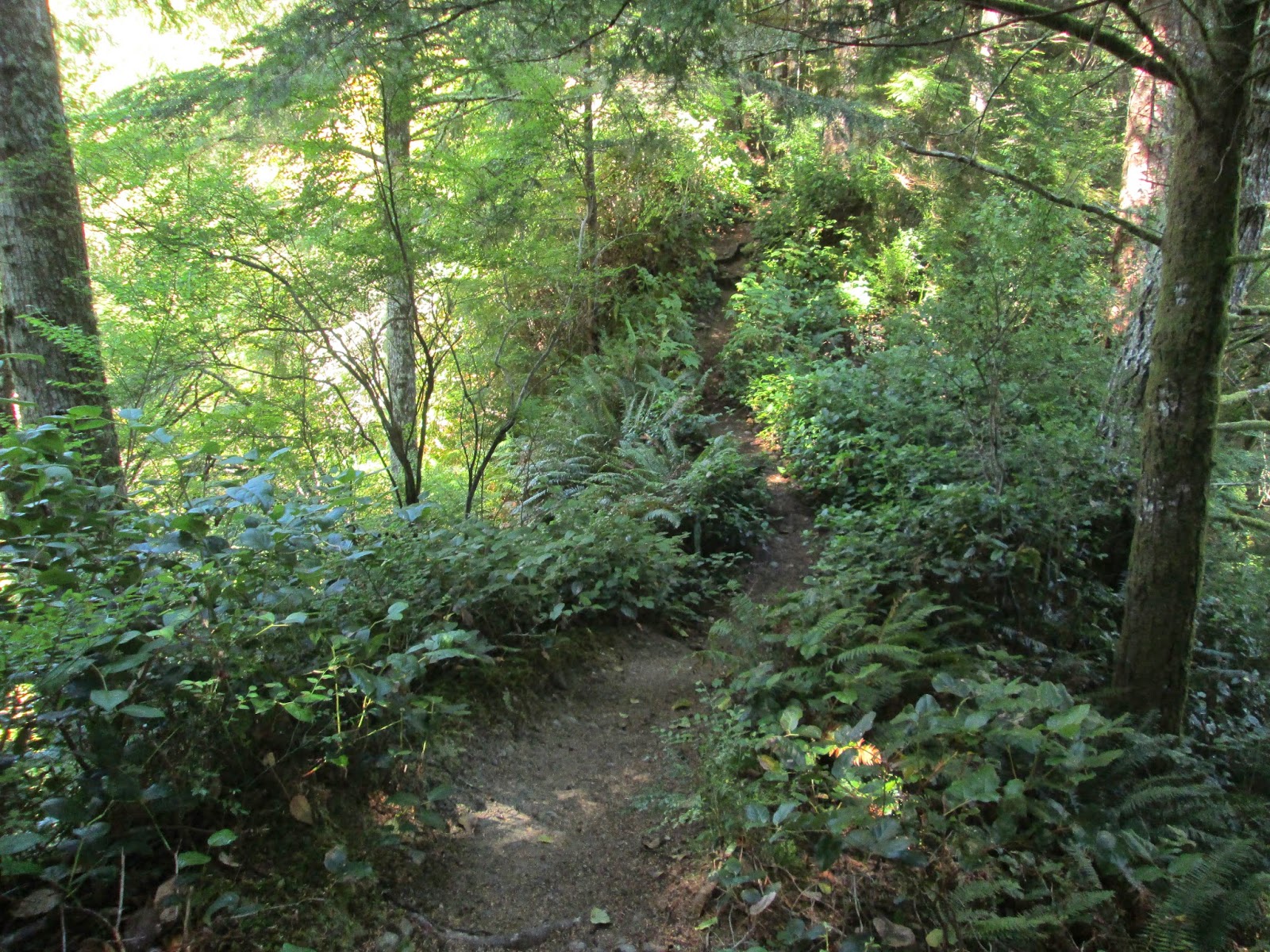 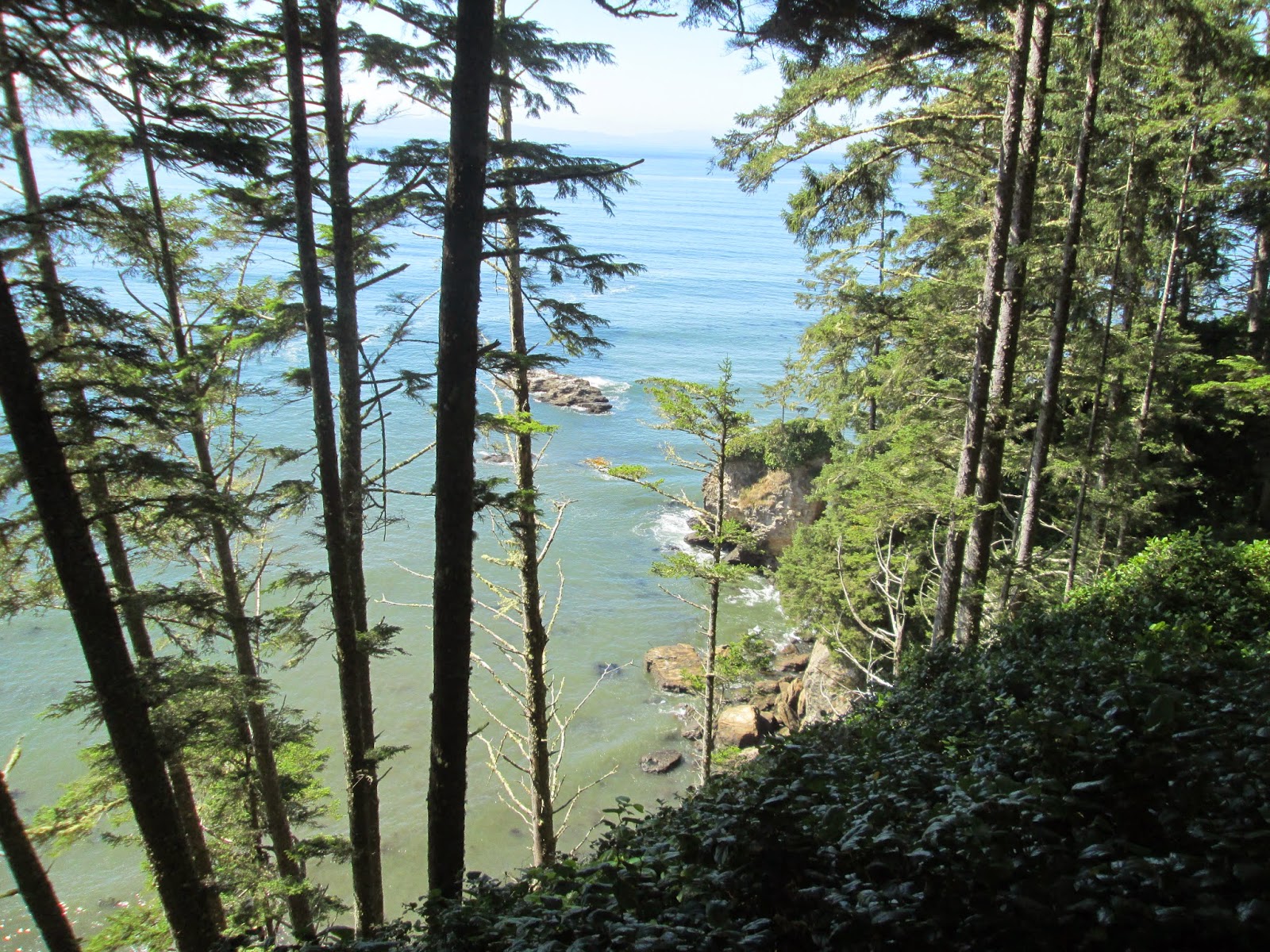 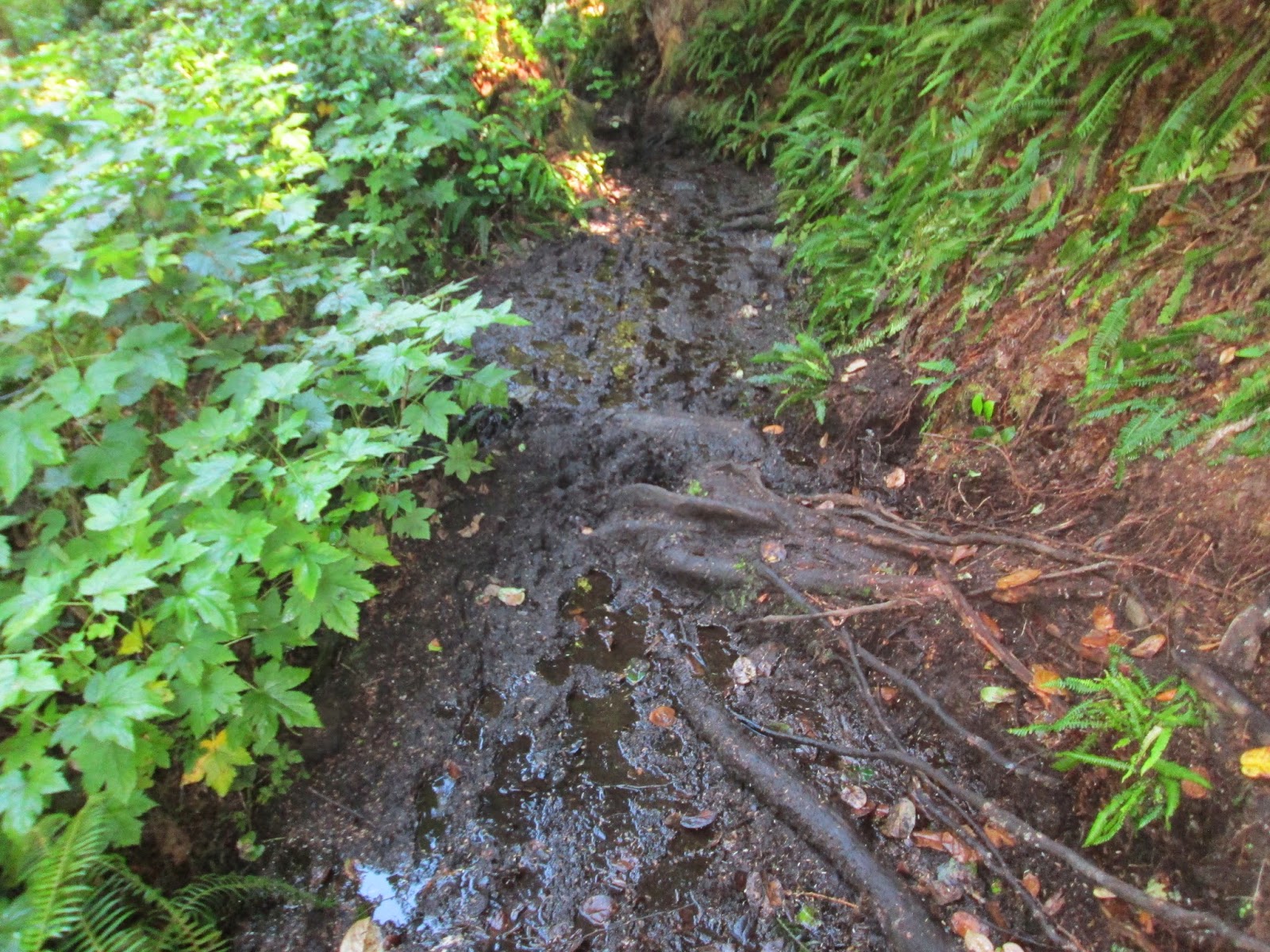 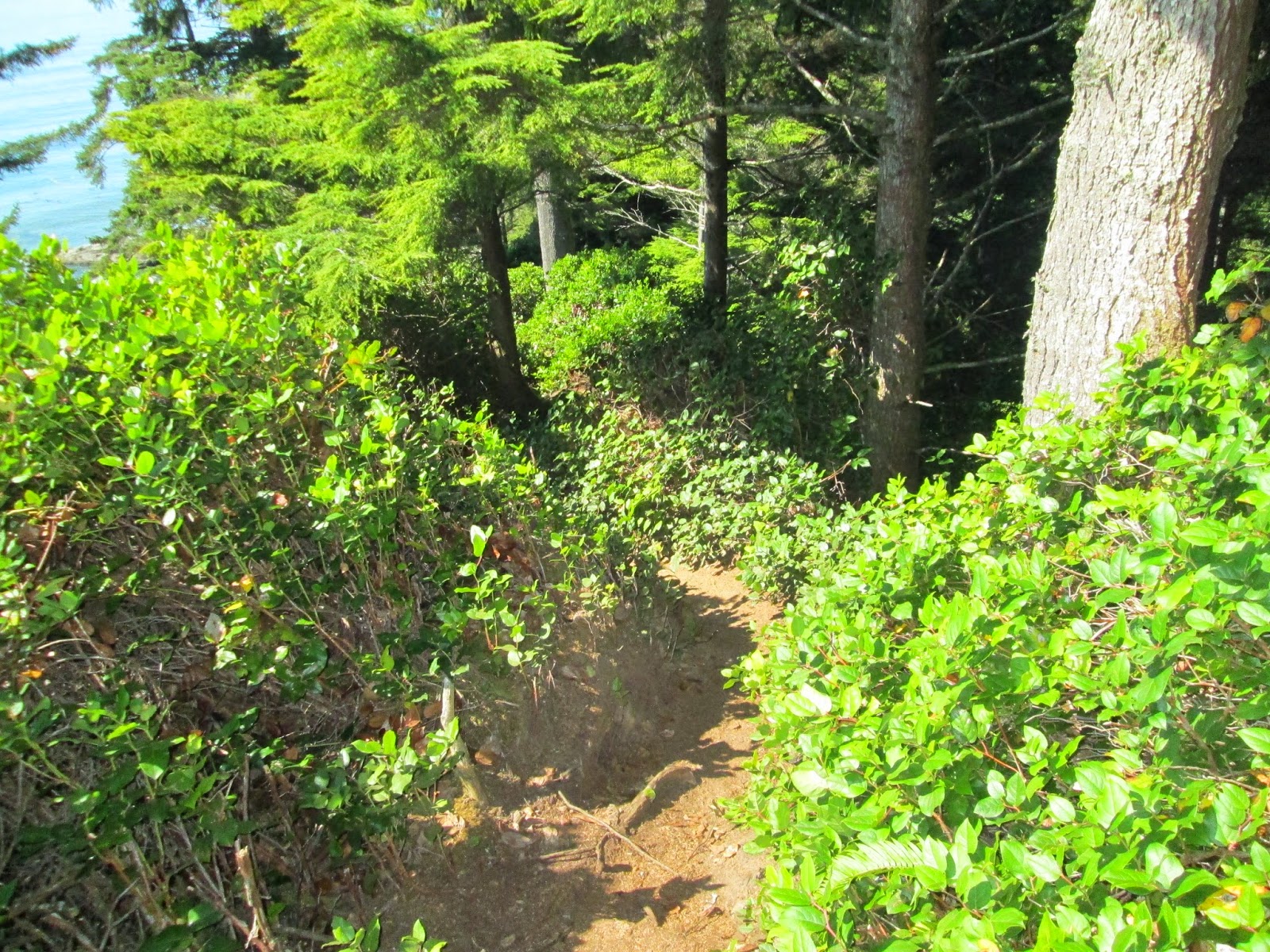 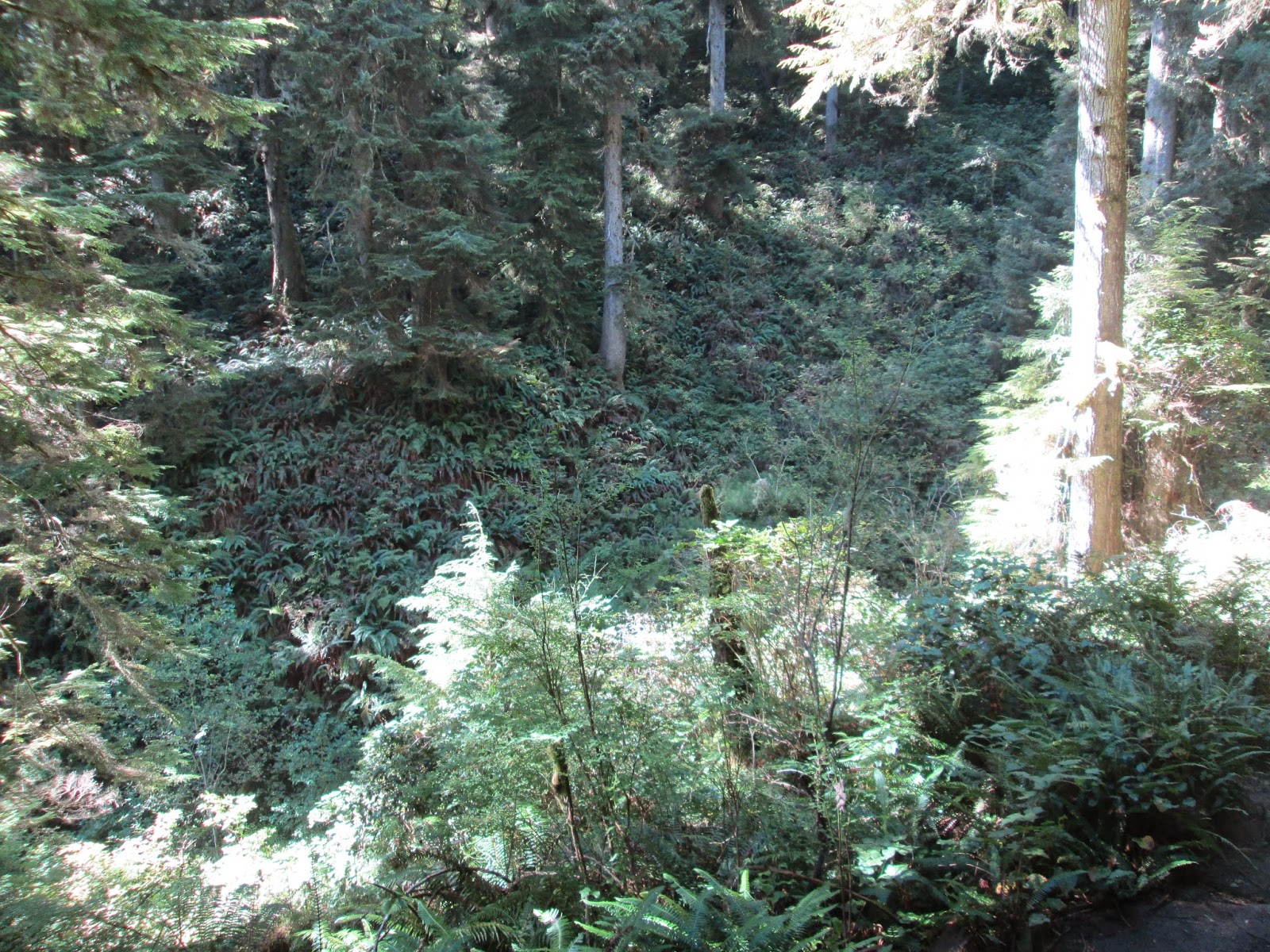 I soon realized that I was going at a slow enough pace that I likely wouldn't make Chin Beach until 5:00 PM.  This section was strenuous enough to put me 2 hours off the pace I had been on before.

I continued pounding out the PUDS (pointless ups and downs) until I reached Chin Beach.  I located the food cache and tried to find a campsite as close to it as possible.  I set up my tent and spent a bit of time watching the ocean.  Bored by the rice meals that had been my staple on the NCT, I had decided to experiment with frozen burritos on the JDFT.  I had hiked with them in my pockets for a few hours, but they were still a little frozen.  Still, it was nice to have a different dinner for a change.

I was tired enough that by about 7:00 PM I went to bed, knowing I had another 20 km day ahead of me and I would need all the rest I could get. 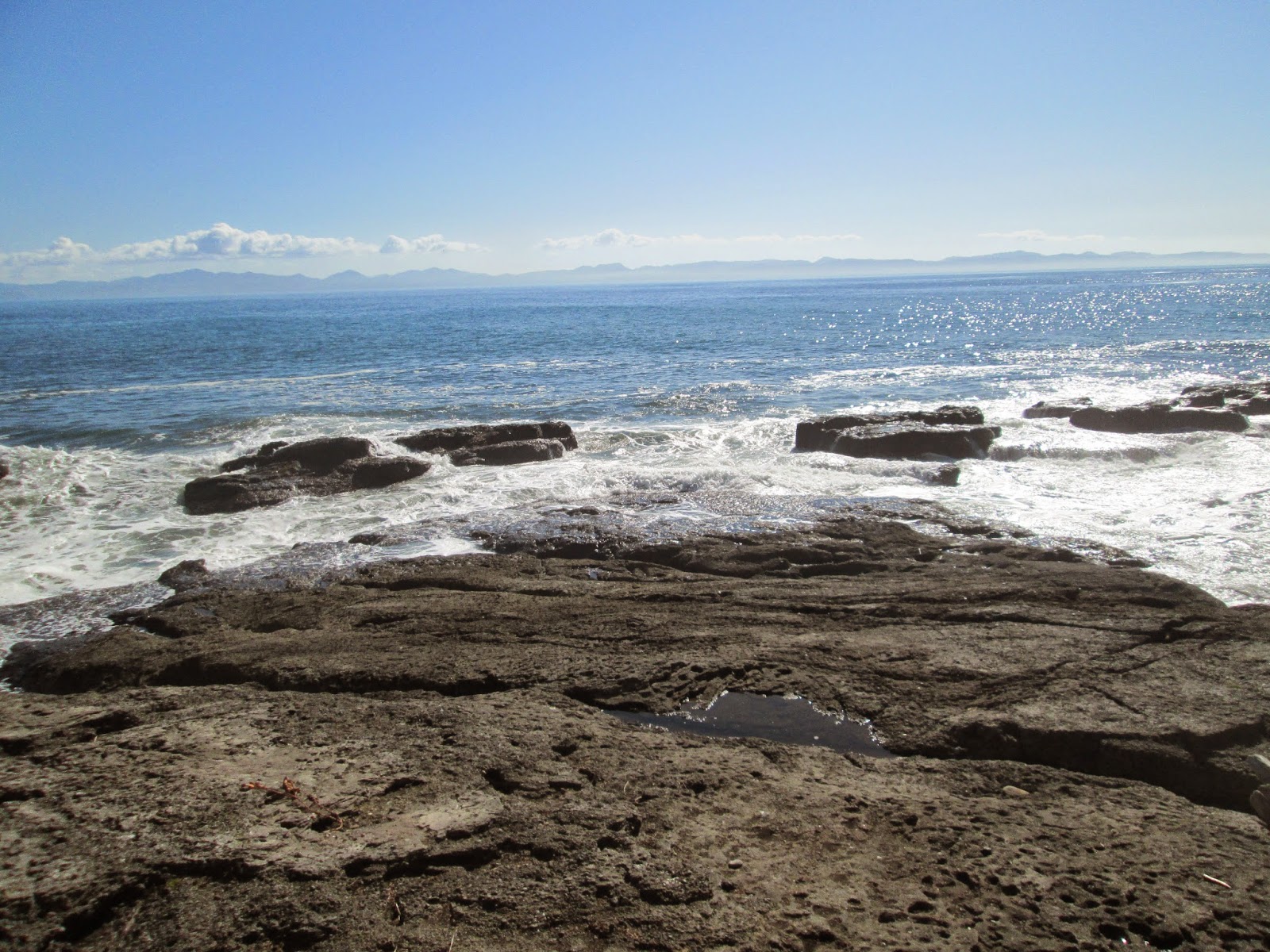 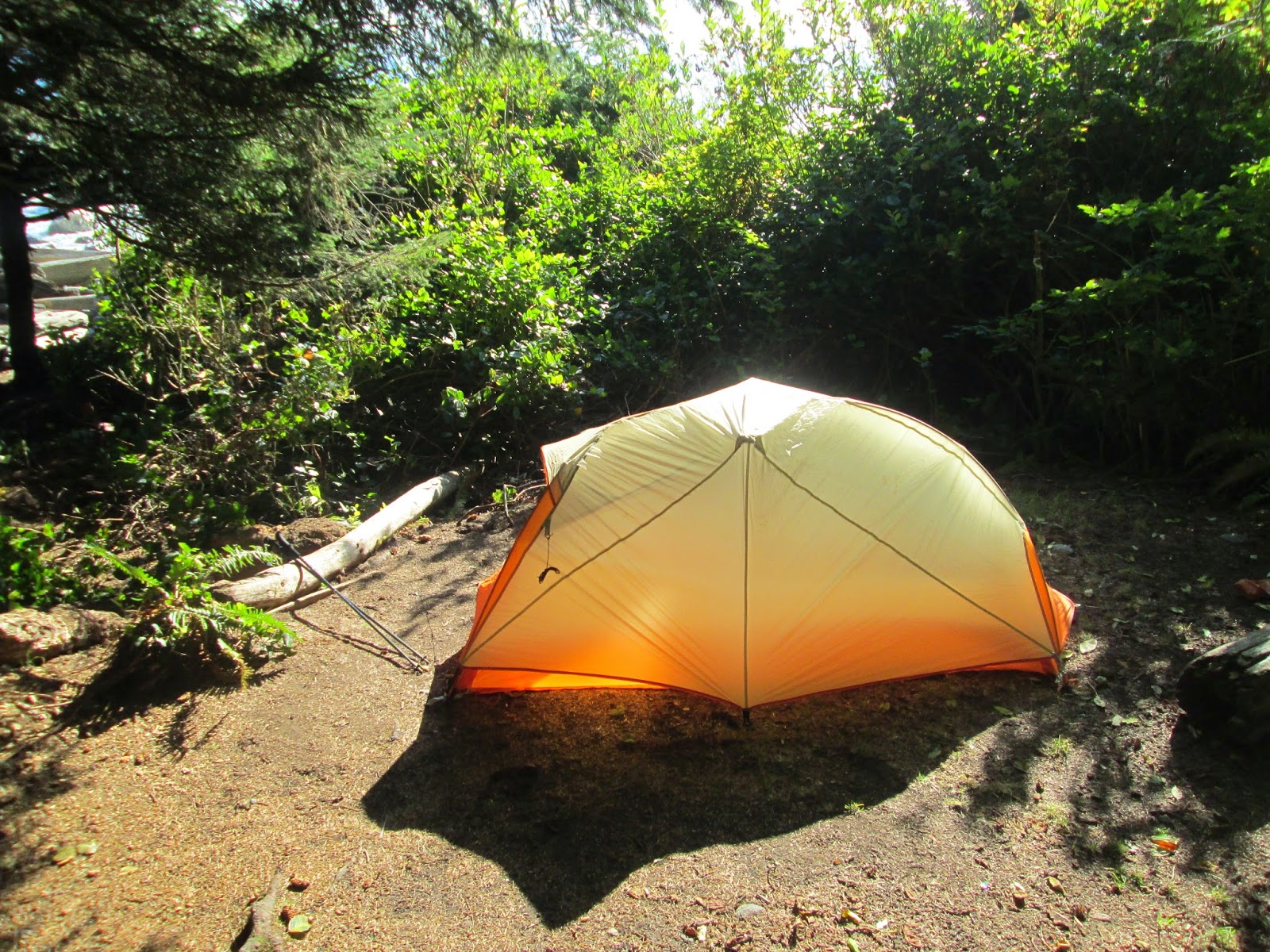