I decided to make my first ever foray into Cathedral Provincial Park and Protected Area earlier this summer.  I had been meaning to make a trip to this park for a while, but I never seemed to find the time.  I had already put the trip off twice this year, once because there was too much snow in the park, and again because of a bad thunderstorm (which in the park was apparently a blizzard).

Being so close to such a popular hiking destination and having never gone to it, I was pretty heart set on finding the time to explore Cathedral Park this summer.  I had taken time off work to go, but that was the week of the blizzard.  I didn't want to try to get more time off, so I decided to try to cram my 4 planned days of hiking into 2 days.  I was pretty sure I would regret this.

Most people take a shuttle into the Cathedral Park core area.  I opted against this for a few reasons.  For one, I'm quite a cheap individual, and didn't feel like coughing up the money to take the shuttle.  Also, it would have restricted my schedule on the second day.  Finally, I felt like I needed to sweat and suffer a bit if I truly wanted to appreciate the park.  For those reasons, I decided to take the 16 km Lakeview Trail into the core area of the park.

I got off work at 11 pm the night before I was going to leave.  My plan was to leave Princeton at 3 am, so I didn't really get any sleep.  I left at 3 as planned and got to the Lakeview parking lot around 5 am.  I saw 2 other cars in the parking lot, while I saw a very full lot at the shuttle parking.  I could tell this was not the popular way of getting into the park.

The first bit of the trail followed the private access road, eventually breaking off for good about 2.5 km in.  The grade climbed up very steadily, giving me a good workout early on. 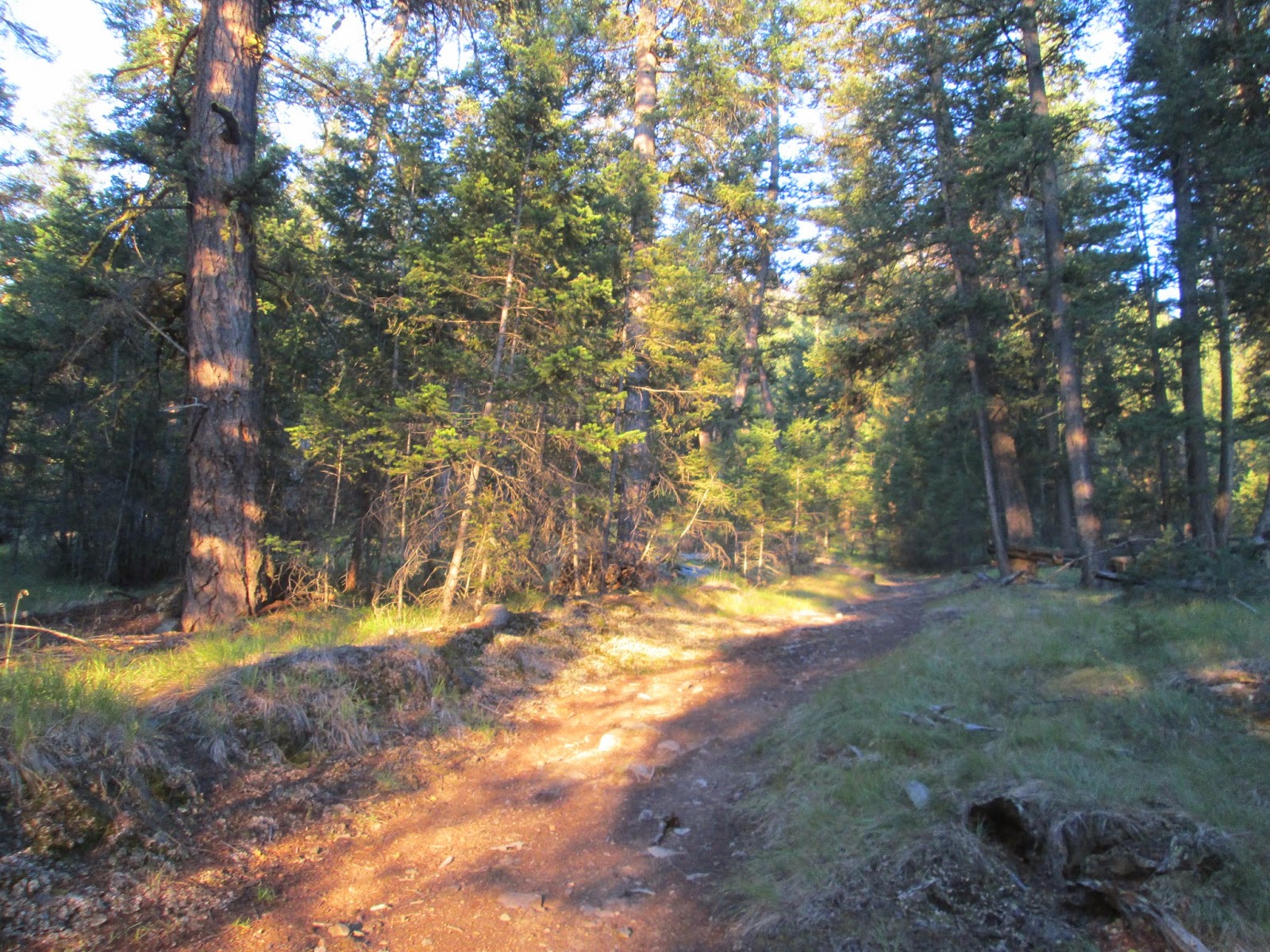 After a good 5 km or so through the woods, I came to a little clearing where the trail began to climb very steeply.  I struggled up, eventually getting on top of a ridge.  I could see some of the features of the core area of the park in the distance.  It was a nice tease of what I would see up close later. 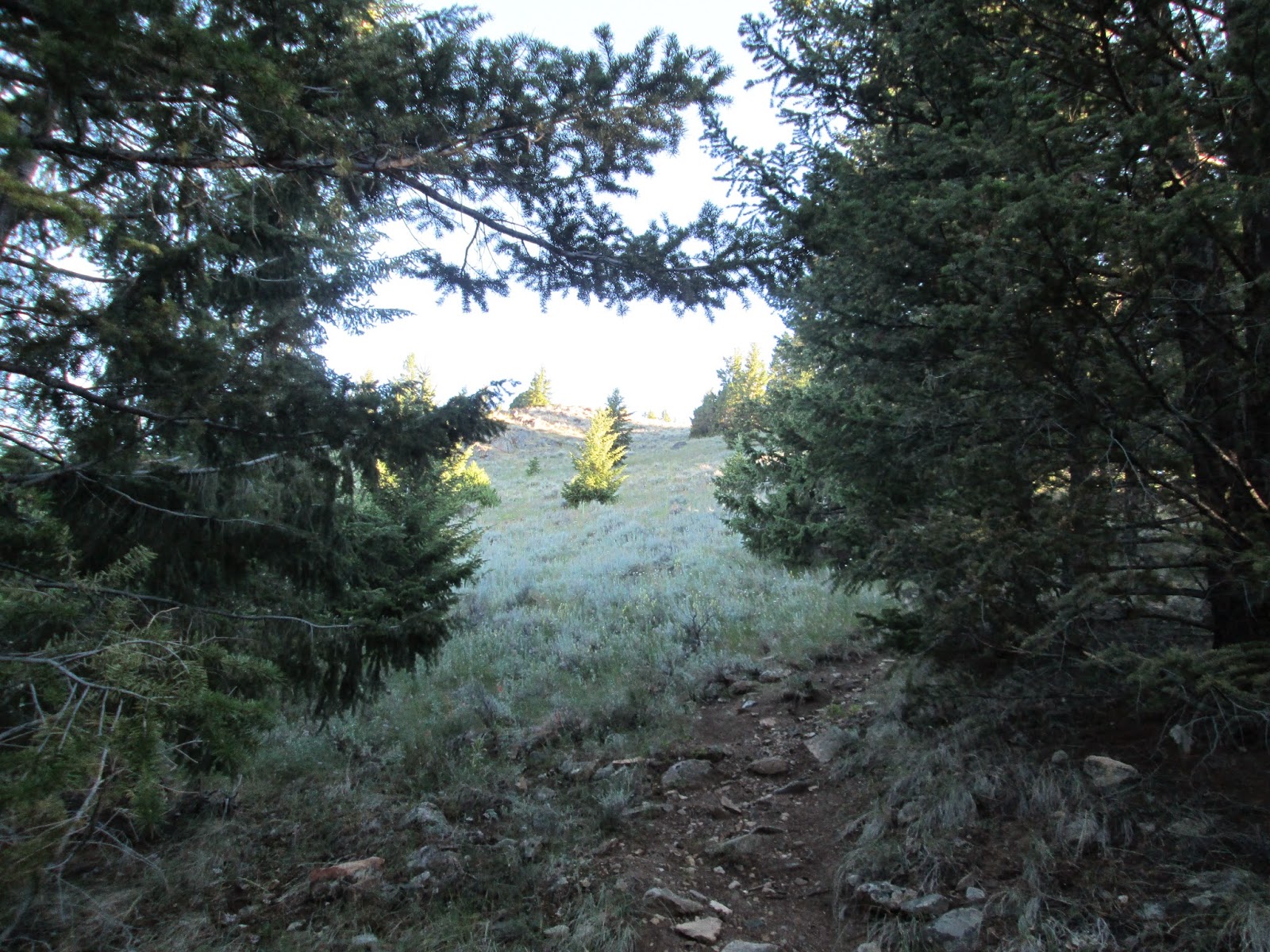 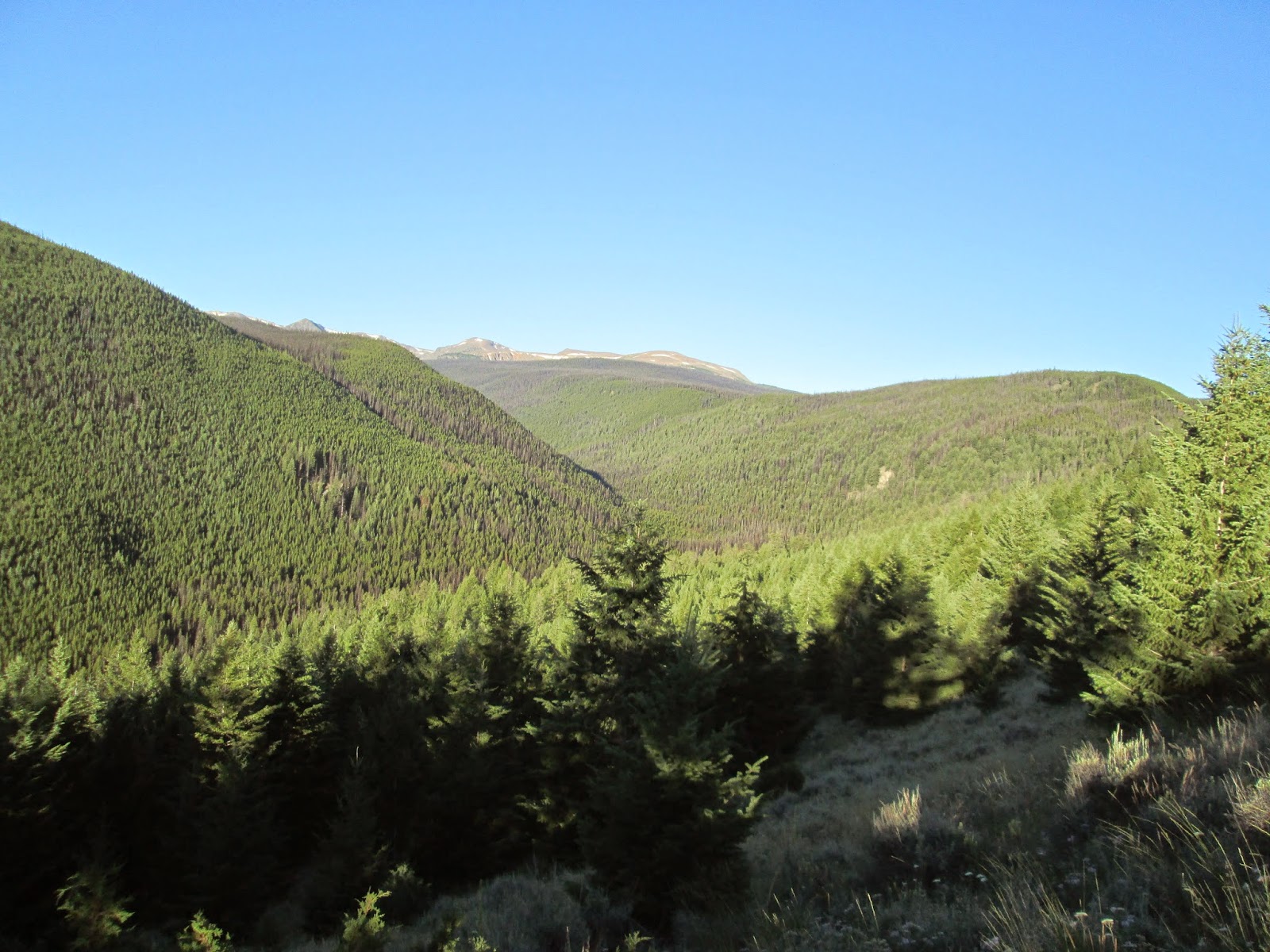 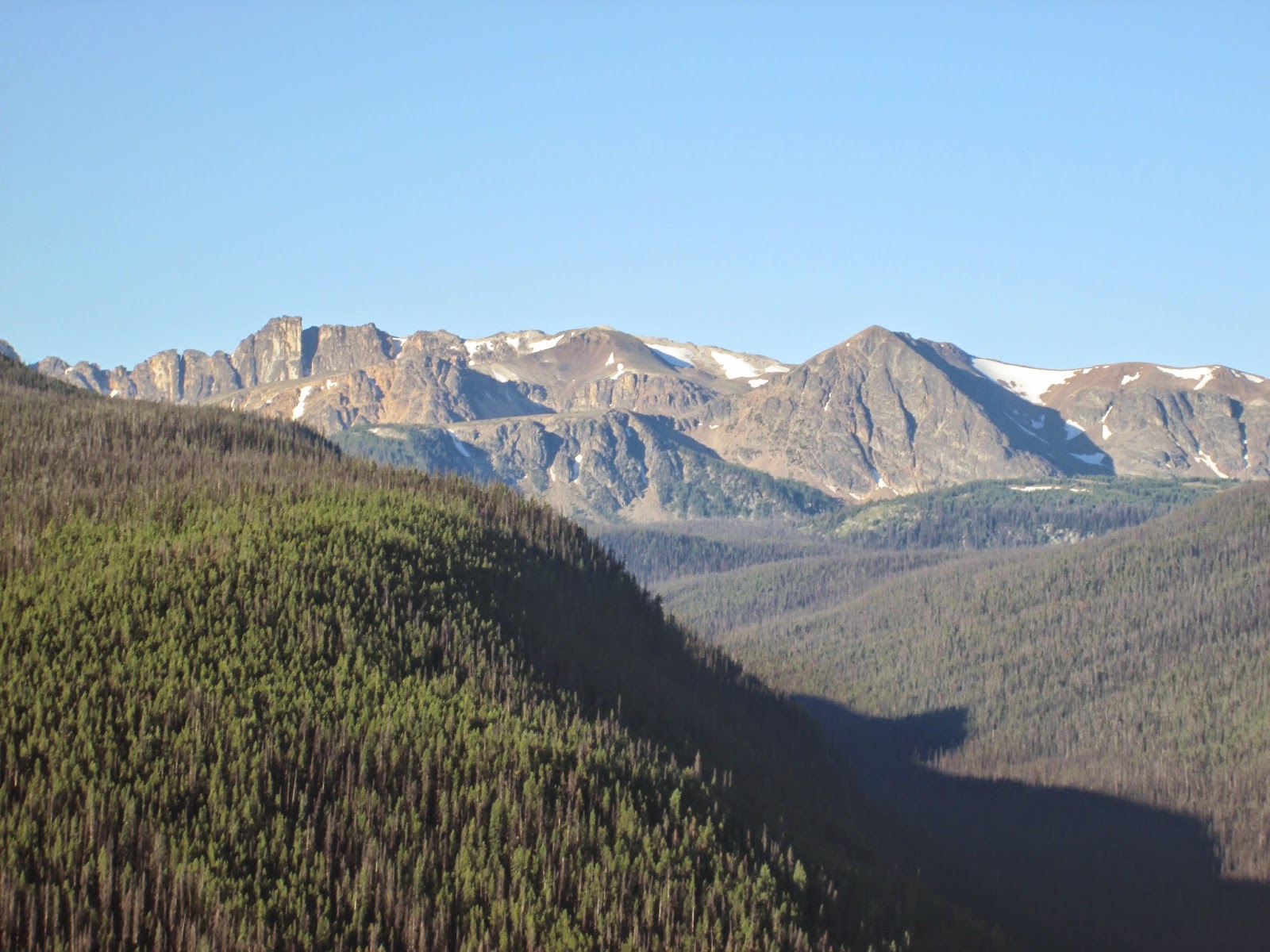 The trail followed the ridge for a little while and the grade got a bit more reasonable.  As I got back into the woods, I began to encounter many spider webs.  I hoped that whoever hiked the trail after me would be grateful for all of the webs to the face I took.  It actually got bad enough that I had to put my jacket back on.  The feeling of the webs dragging along my arms was really starting to weird me out.

I ran into a kilometer that was pretty much solid mud.  Try as I might to not get my pants filthy, I ended up stepping in one or two patches of mud that were much deeper than I anticipated.

After a while I crossed into the core area of the park.  I was hoping I would maybe start to see a bit more scenery.  Other than the one little clearing I had crossed, my views for the day had been trees and mud.

The trail eventually entered a little meadow, and I soon ended up at the height of the climb.  I began the descent into Quiniscoe Lake, encountering a few hikers along the way. 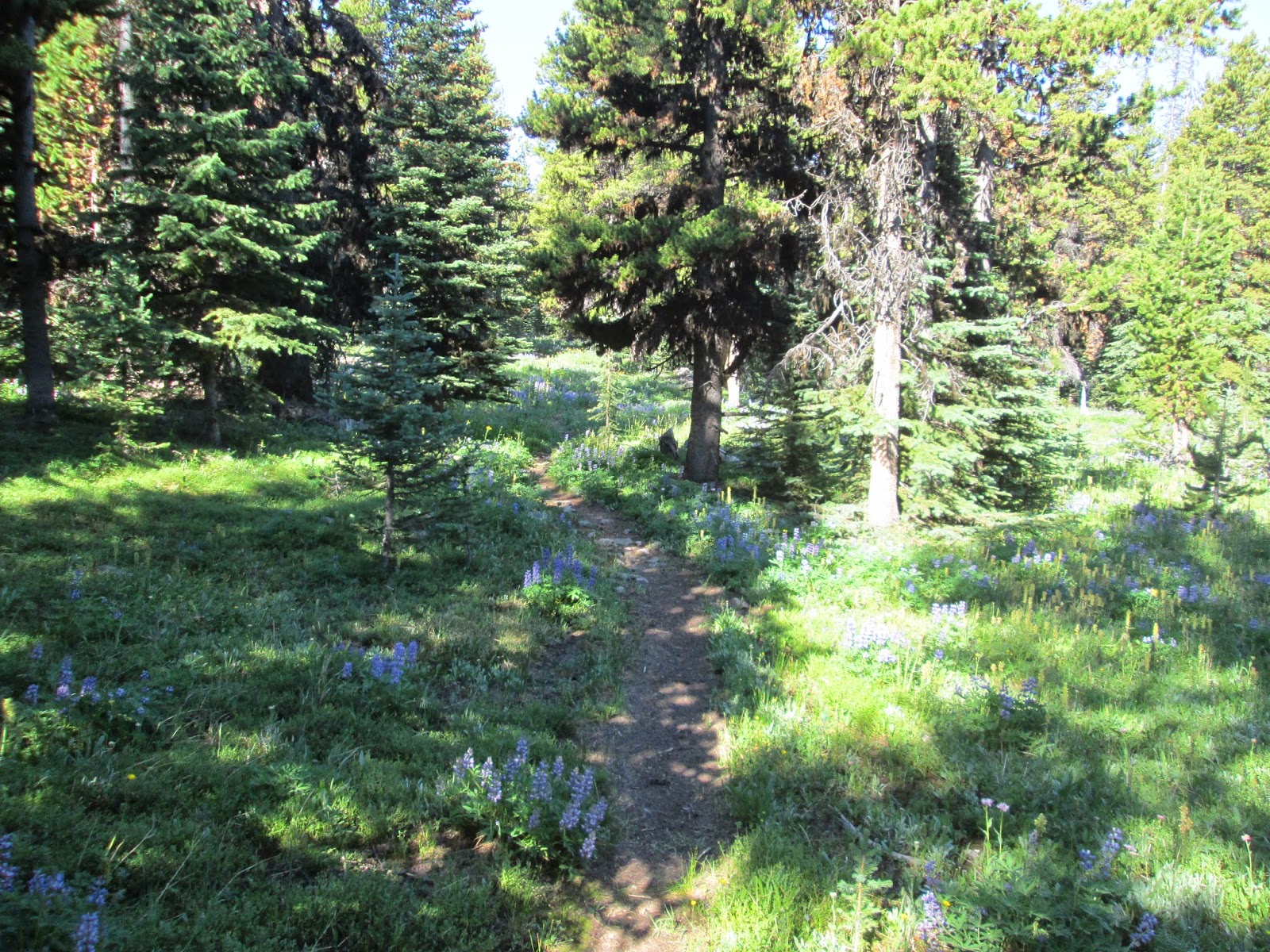 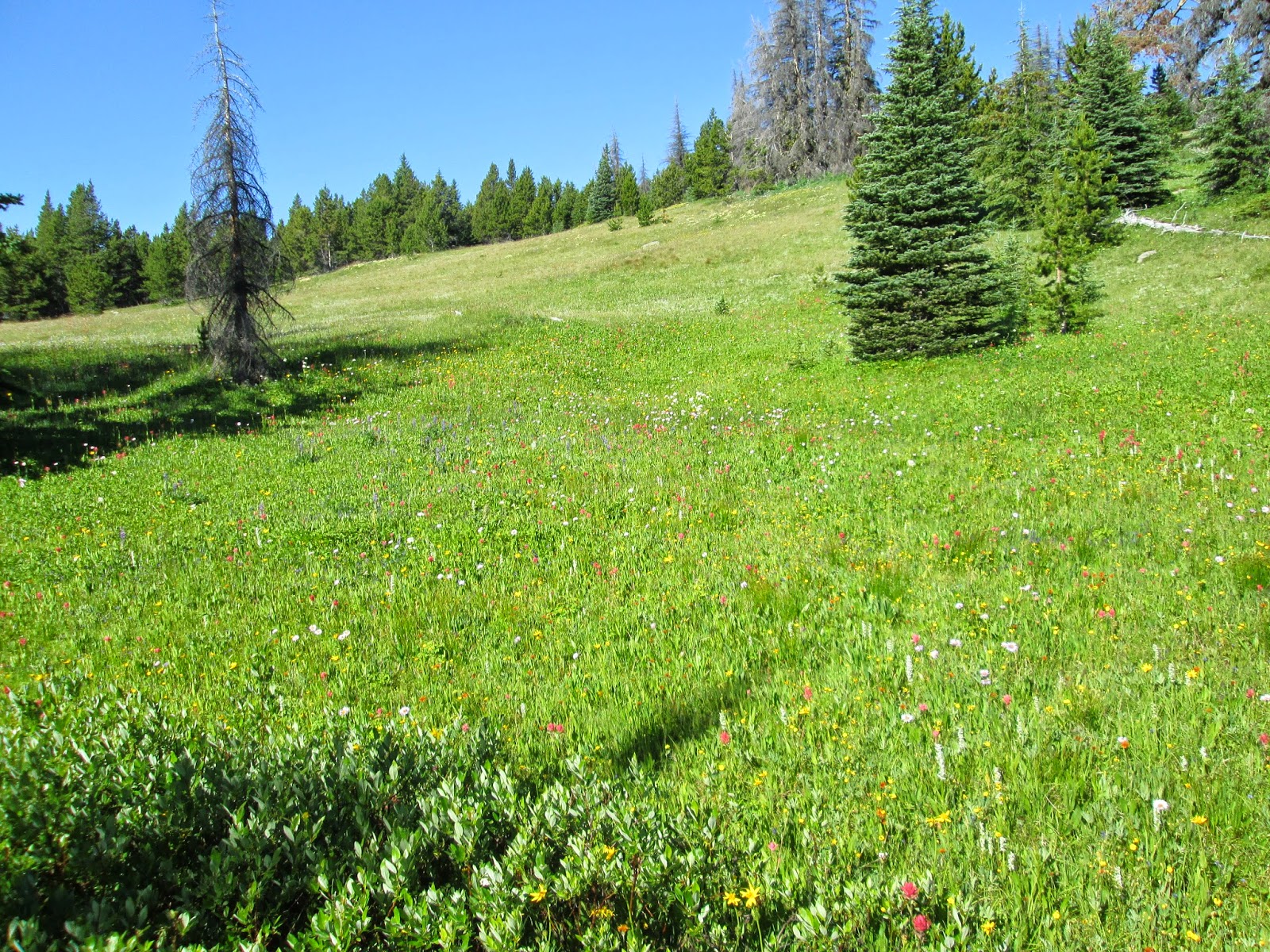 At Quiniscoe Lake I had my lunch of hummus and crackers.  It occurred to me that I had done what most people considered a full day hike, and I still had another full day hike to look forward to.  It was about 10 am, so the trail had taken me 5 hours to complete.  I was hopeful that making good time would put me under less pressure for my next hike: the Rim Trail.
I had heard that there were a couple of groups doing the Rim Trail in the same direction as me.  I doubted very much that I would run into them, but I was fairly certain I would run into at least a few people doing the hike in the other direction.

I decided the hike to Glacier Lake and climb up to the rim from there.  I climbed up into another meadow with patches of alpine larch trees. 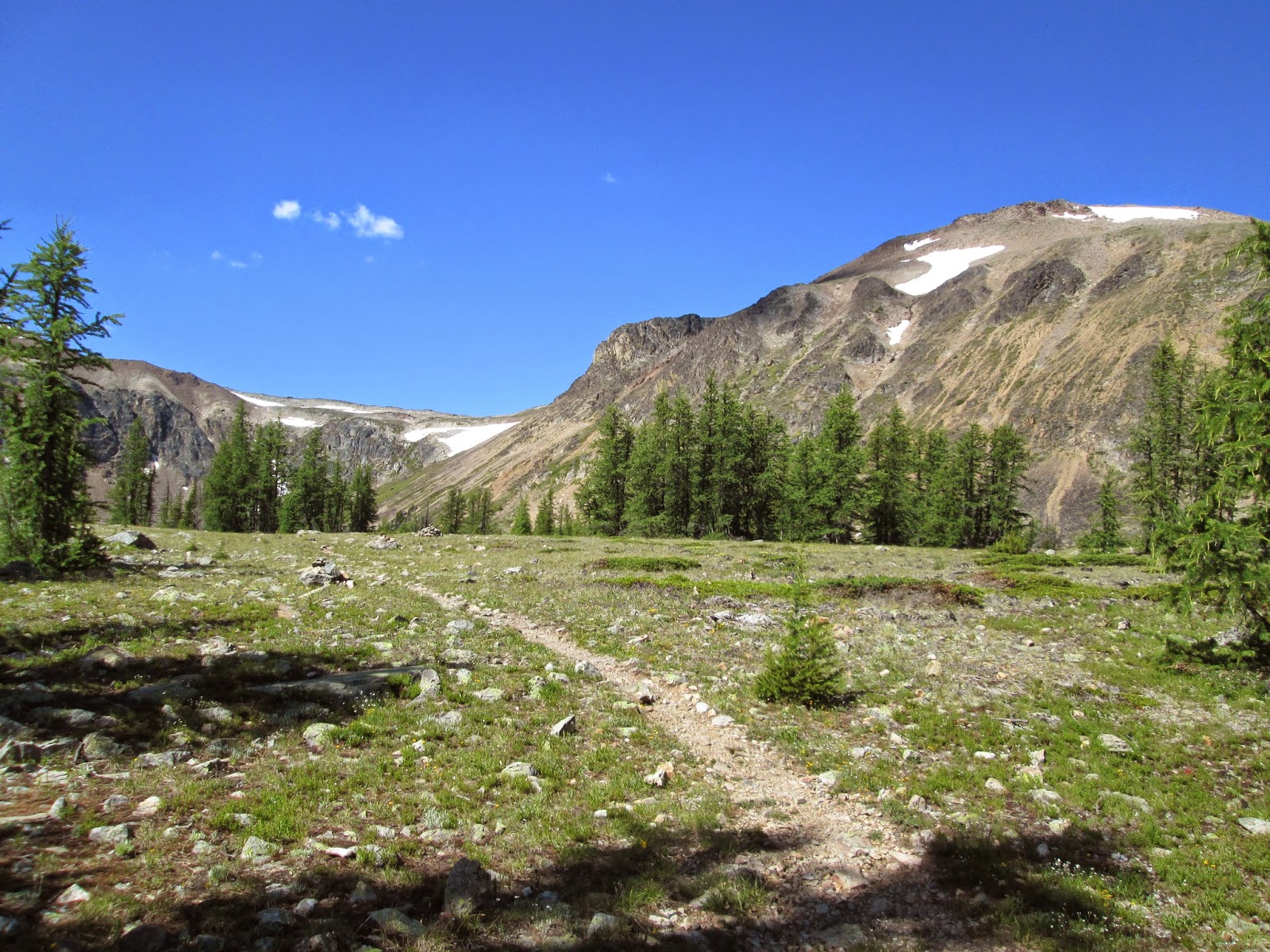 The trail worked its way to Glacier Lake where I began the rocky ascent to the rim.  I was glad I went up here instead of down here; it would have been very difficult to climb down all of the loose rocks.

I got on top of the rim and was immediately rewarded with some amazing views of the Cascade Mountains.  I could see a number of mountains in Manning Park that I had climbed, as well as other mountains in the area that I was familiar with.  It was kind of interesting to see an area I had spent so much time in from a different angle. 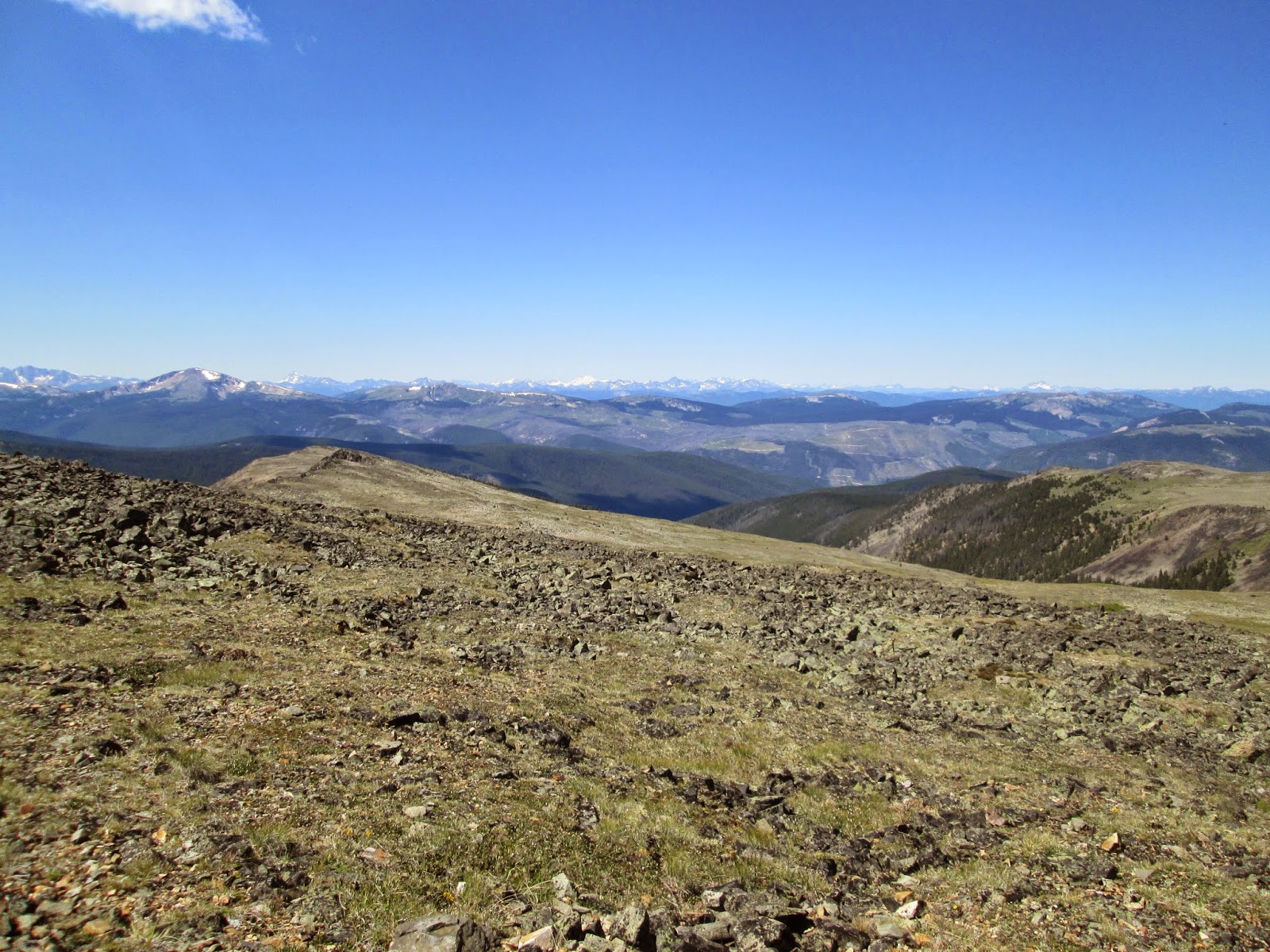 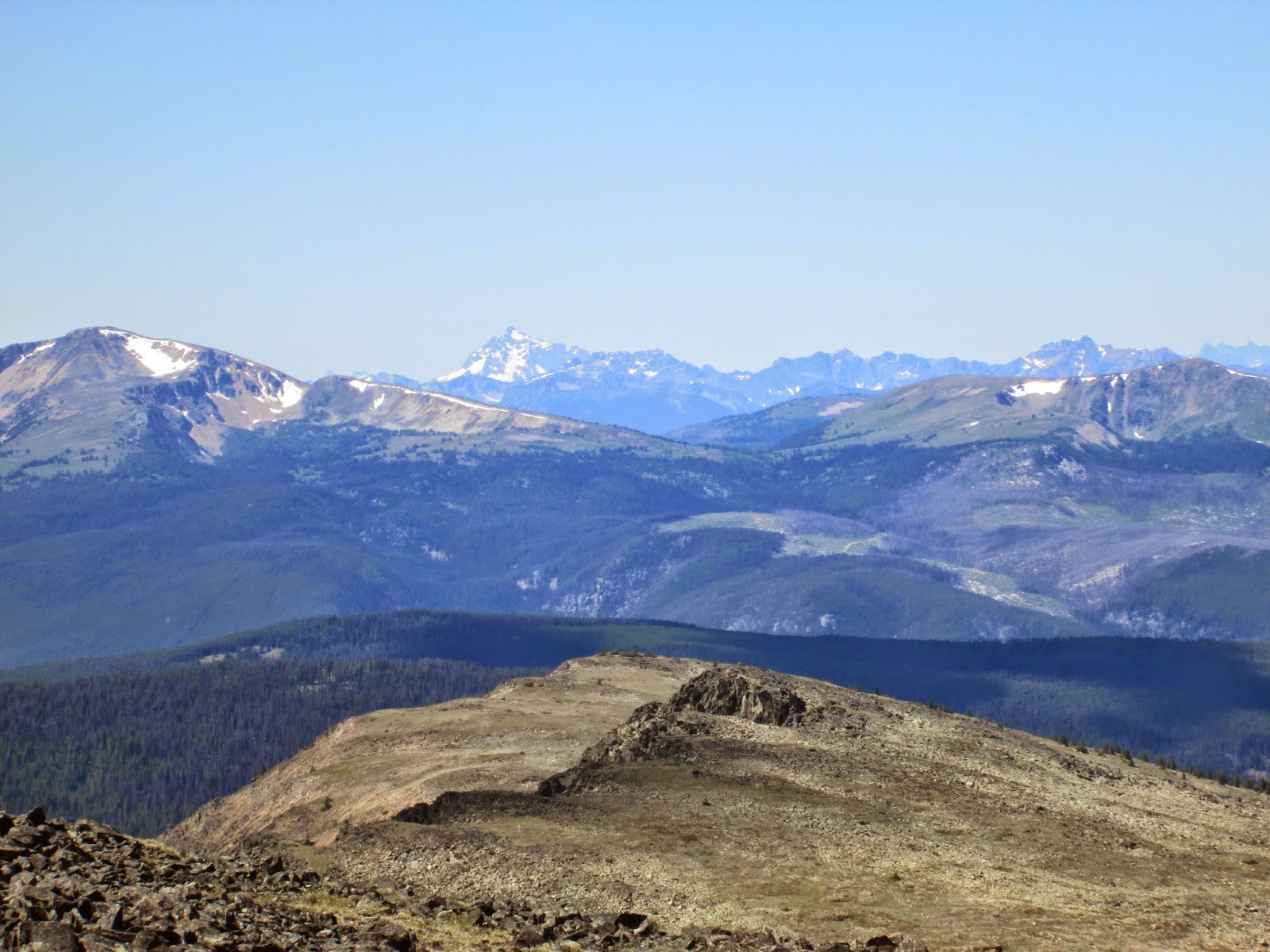 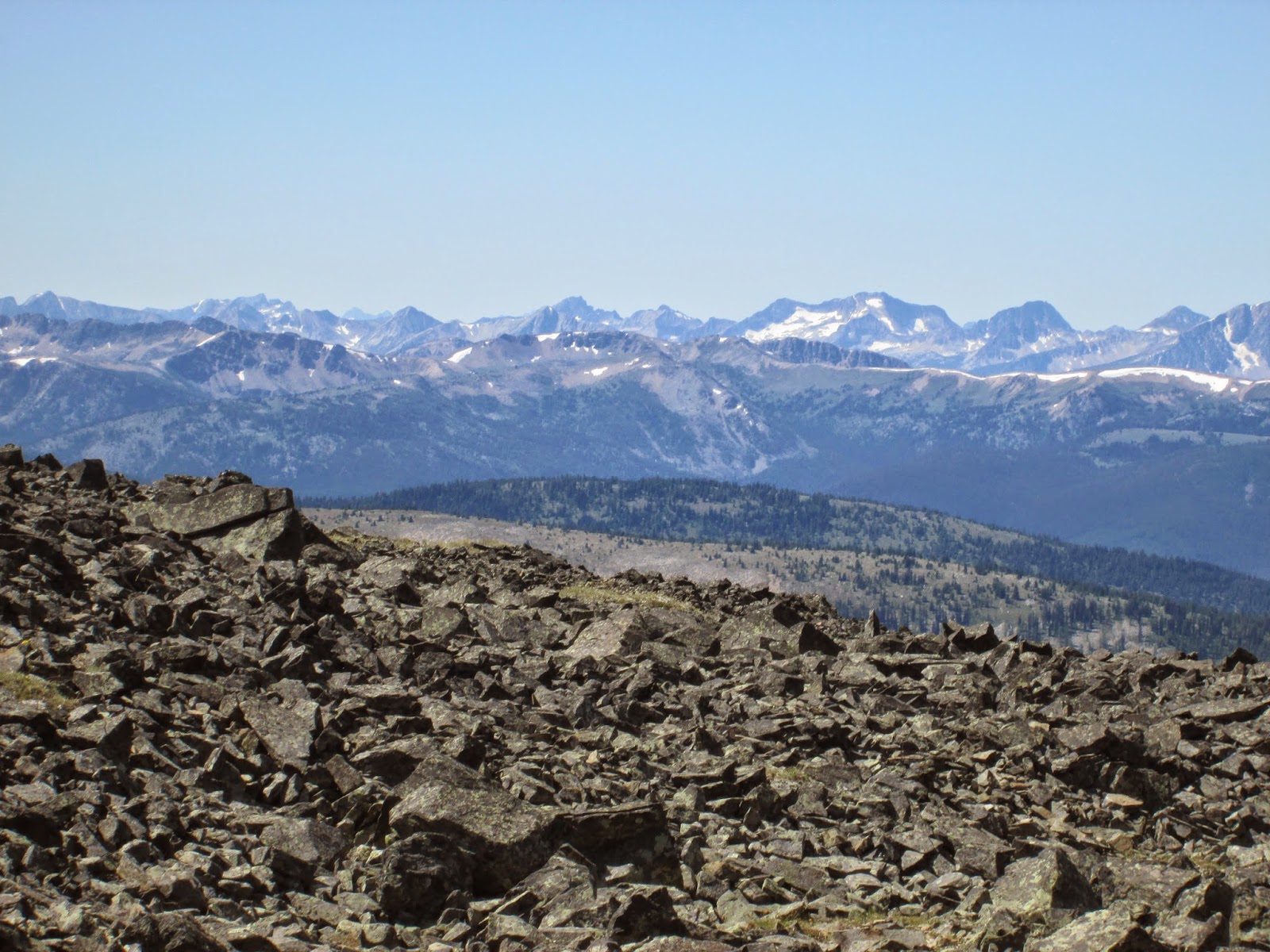 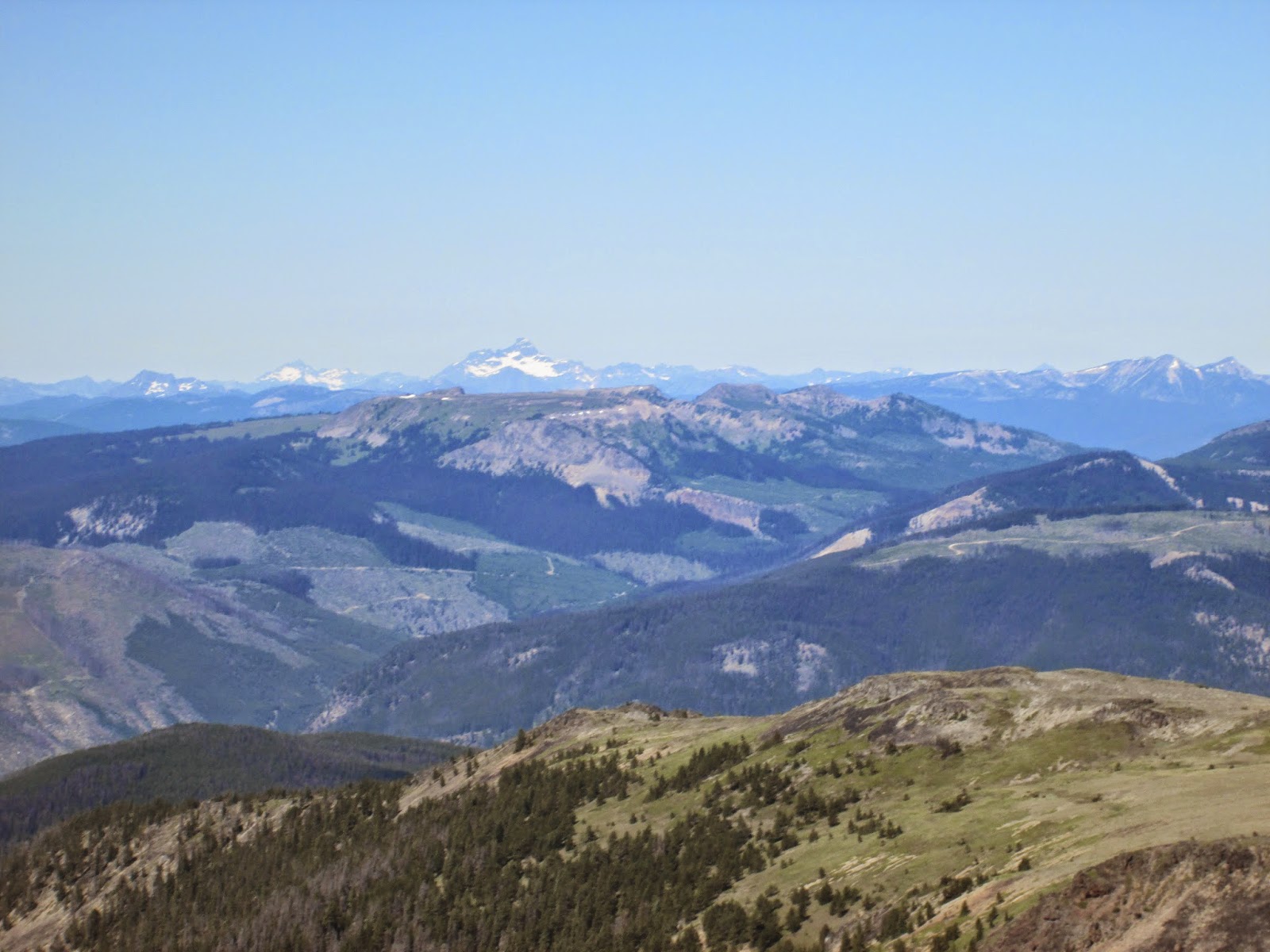 After stopping to rest up, I continued along the rim.  After the ascent the rest of the hike was pretty easy.  I took lots of pictures and just kind of meandered along at a slow pace.  The sleep deprivation and physical exhaustion were starting to set in, and I found that I had next to no energy left.

I passed by Ladyslipper Lake and continued on to the Devil's Woodpile, a basalt rock formation.

From the Devil's Woodpile I hiked to Stone City.  Along the way I ran into a number of interesting rock formations, before getting to the city itself where there were piles of boulders as big as houses. 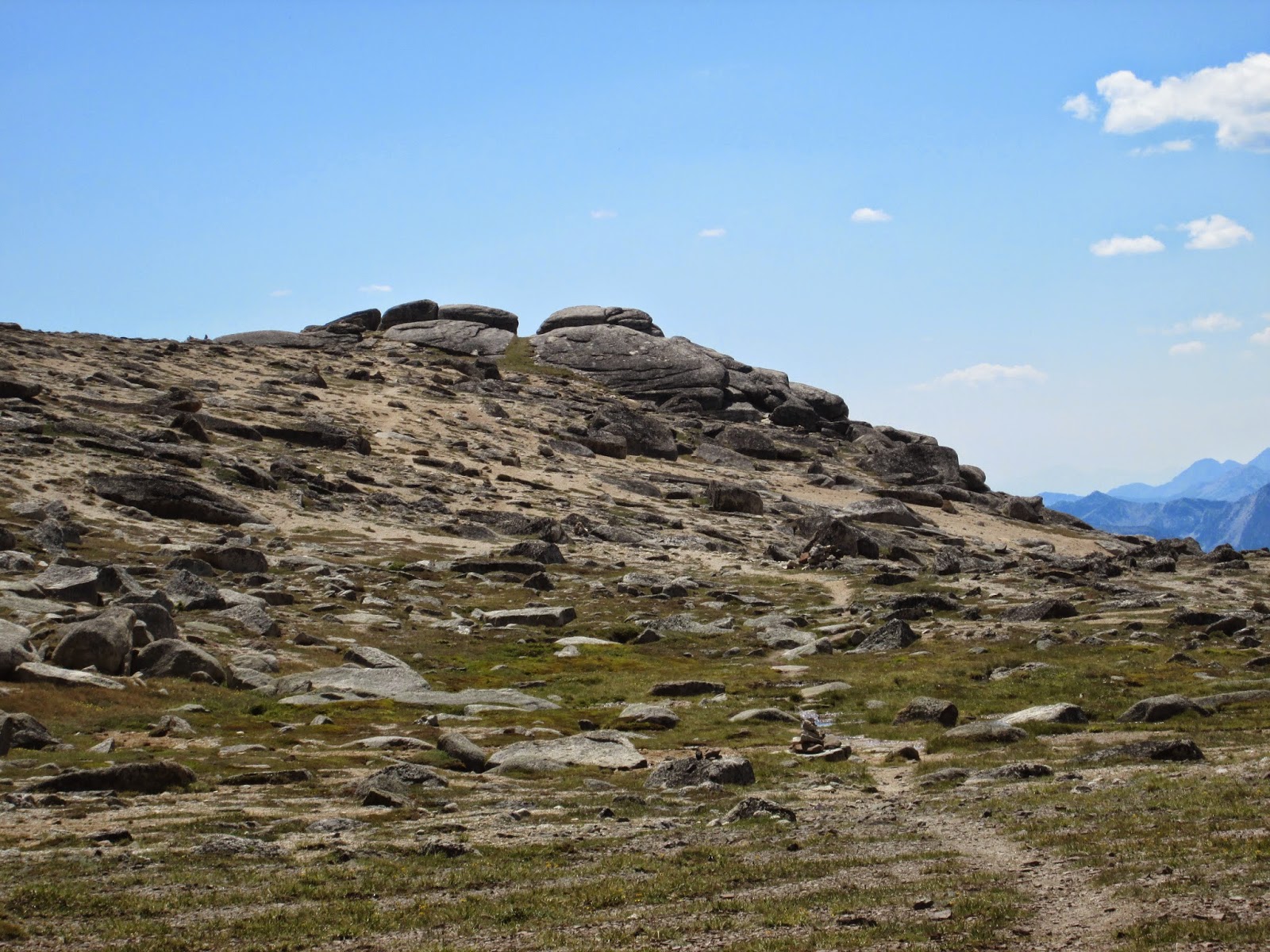 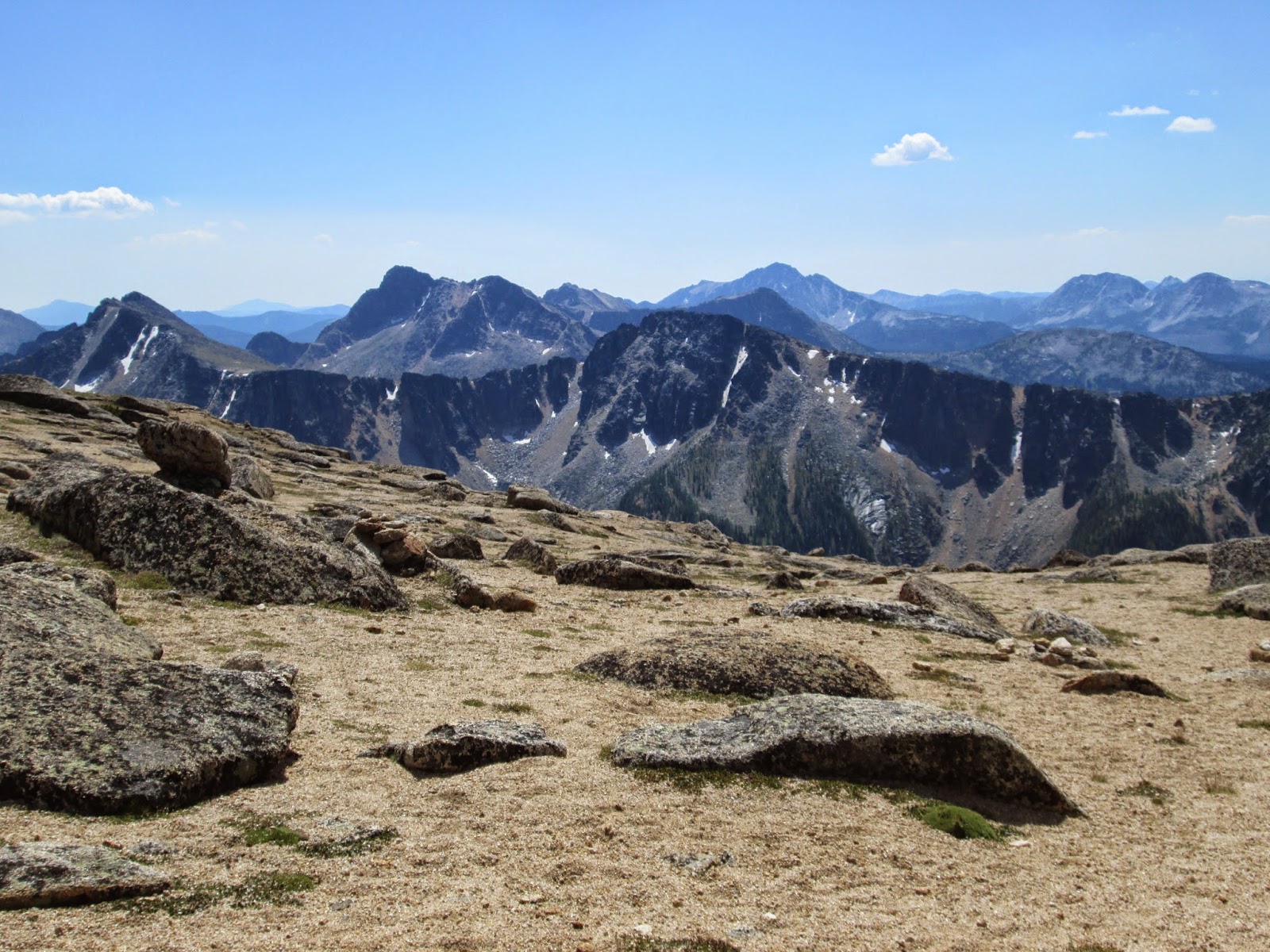 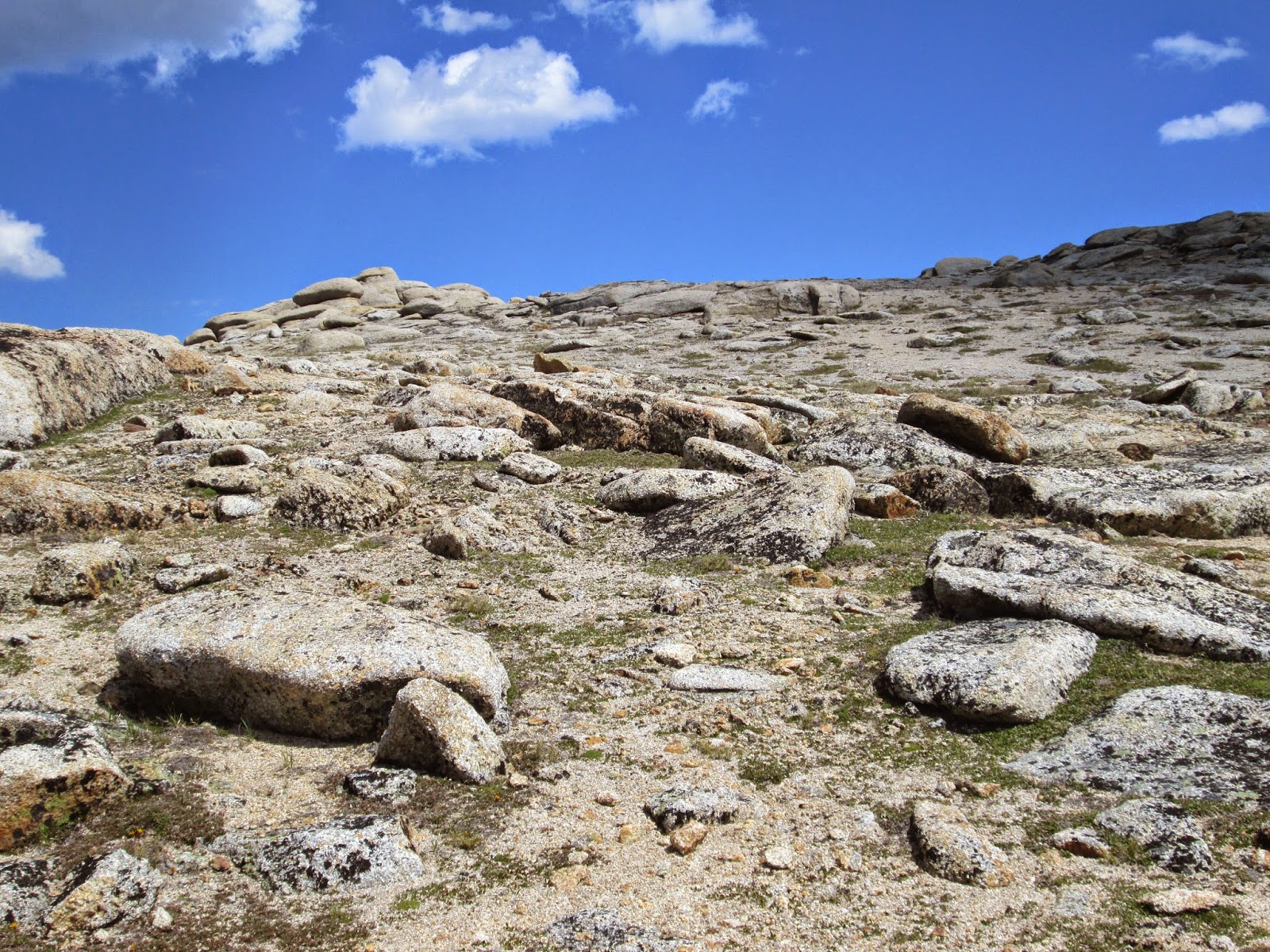 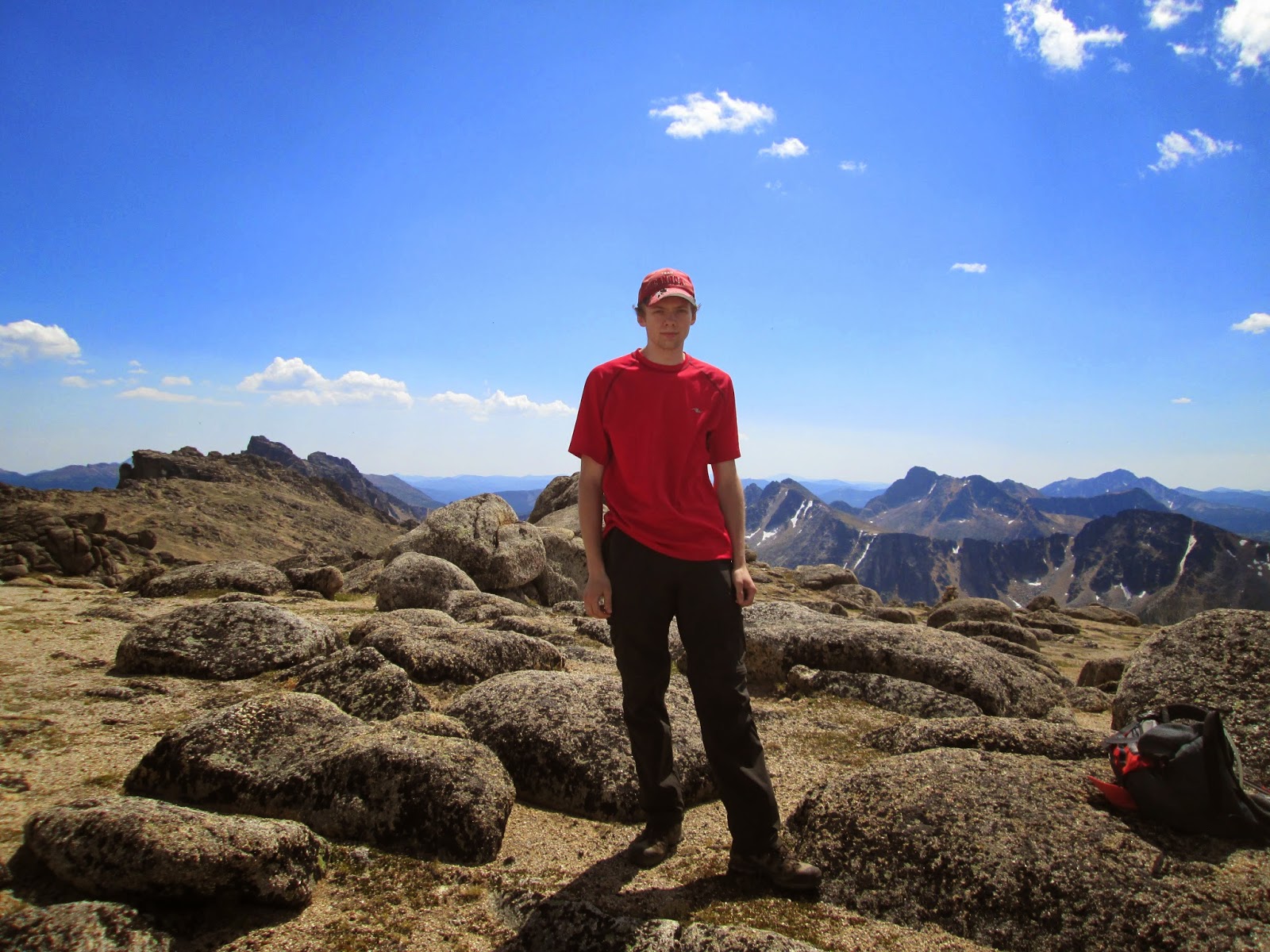 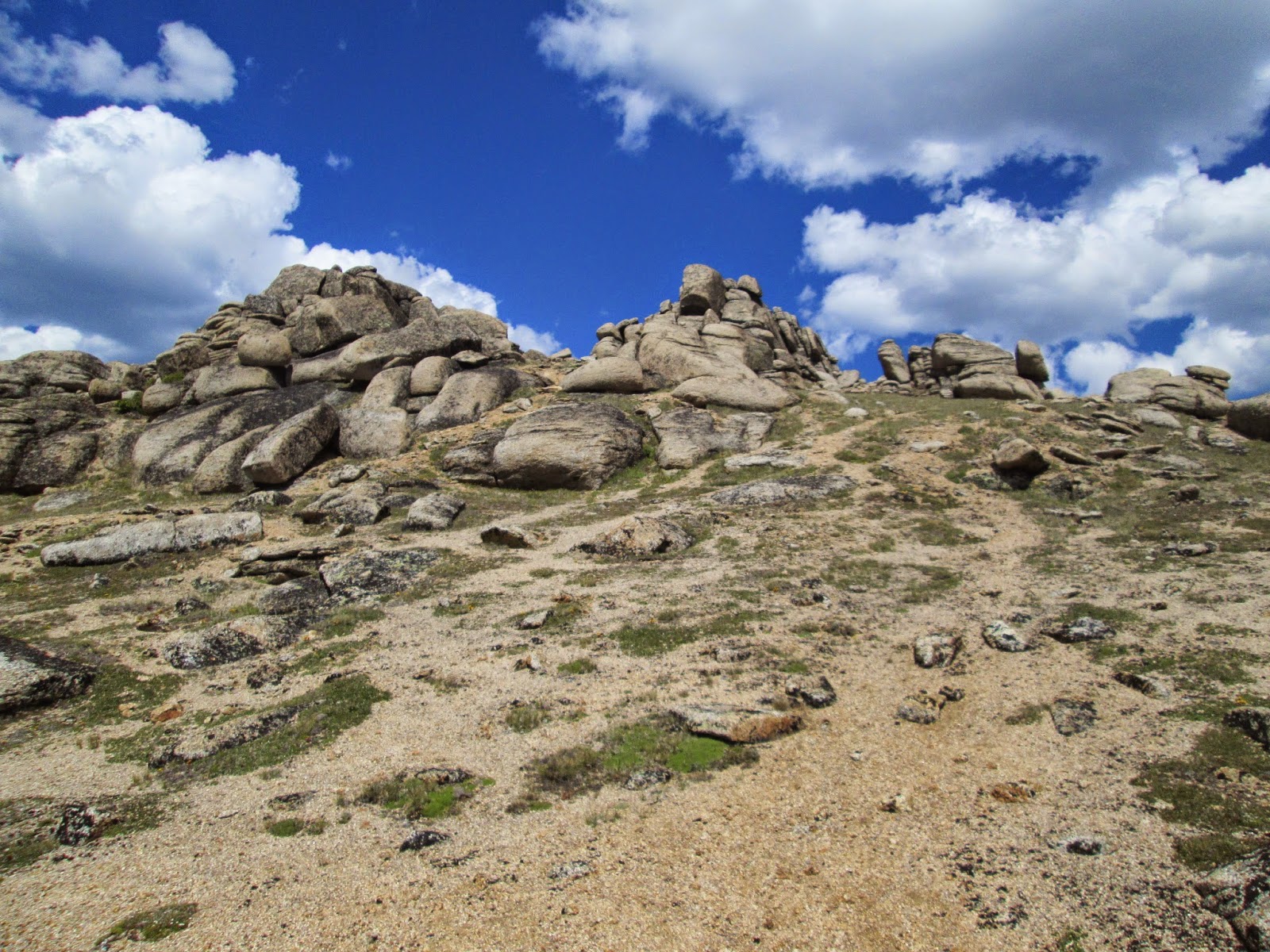 I ended up running into both groups that had been doing the rim and spent a bit of time hiking with each.  I hadn't been expecting that, but it was a nice surprise.  Given my exhausted state, it was nice to let somebody else do the route finding.

I left my pack around Stone City and hiked to Smokey the Bear, a rock formation that forms the silhouette of the fire fighting bear.
I continued on to the Giant Cleft, losing the trail numerous times.  I ended up doing a bit of unnecessary rock climbing on one such occasion, as I was too stubborn to turn back and find a better route.

The Giant Cleft was larger than I had expected it to be.  I was impressed at just how straight the split in the rocks was. 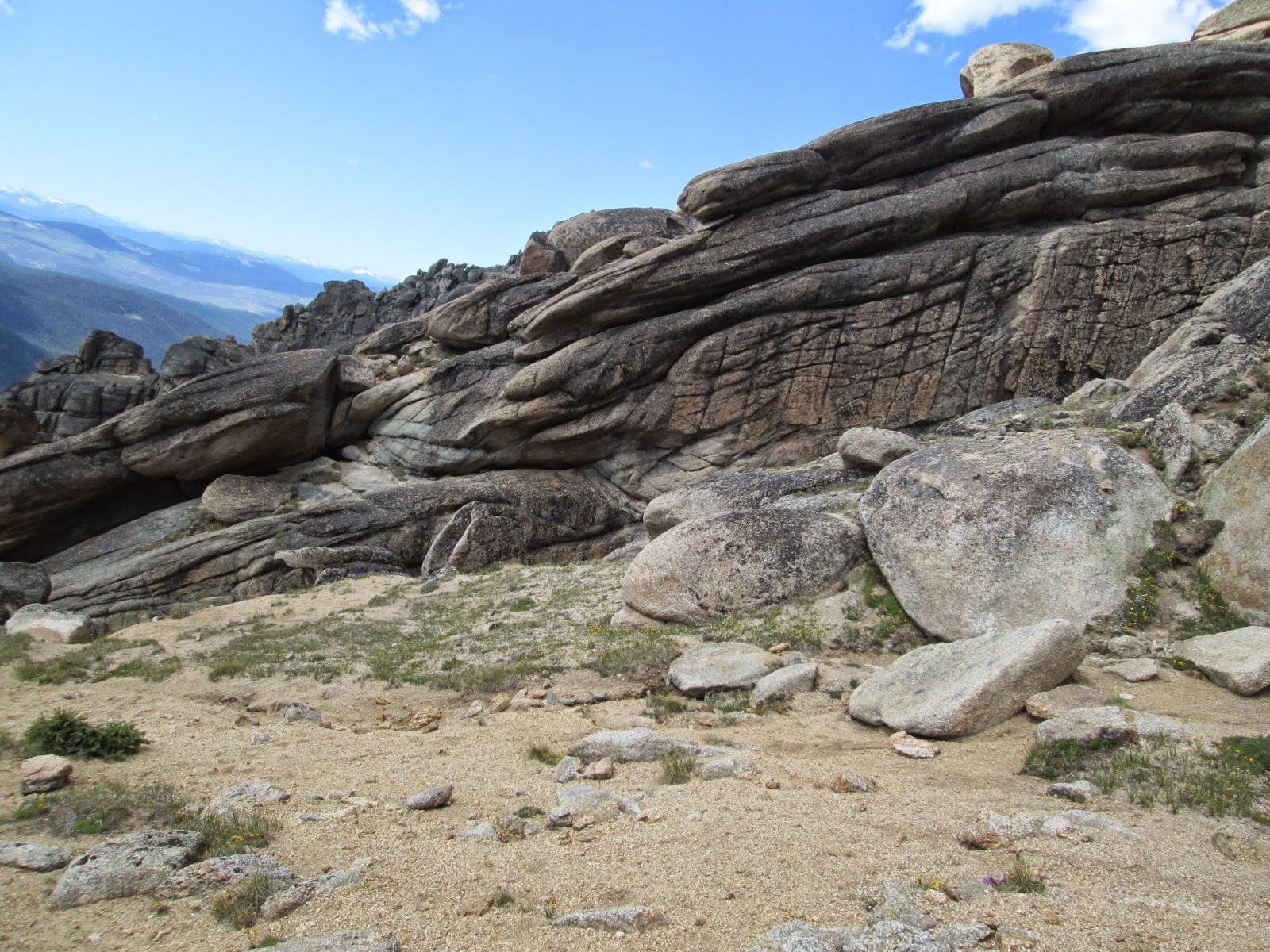 I returned to Stone City and got my pack, beginning the long descent to Ladyslipper Lake.  I saw a couple of mountain goats along the way.  I saw even more goat droppings along the way.  Fun times.

From Ladyslipper Lake I continued on to the Lake of the Woods, where I intended to camp for the night.  As I got close to the campsite it began to lightly drizzle.  From what I could see, it was raining pretty hard in the distance.  I think I ended up hiking right around the boundary where the rain stopped.  I was really hoping I wouldn't get one of the infamous sudden changes of weather I had heard plagued this area.  I didn't want to have to pack up a soaking wet tent and carry it in my backpack for a full day.

I set up my tent at the campsite and fell asleep almost immediately.  I still had another full day of hiking ahead of me, and I needed all of the rest I could get.

You can read about the second day of my trip here. 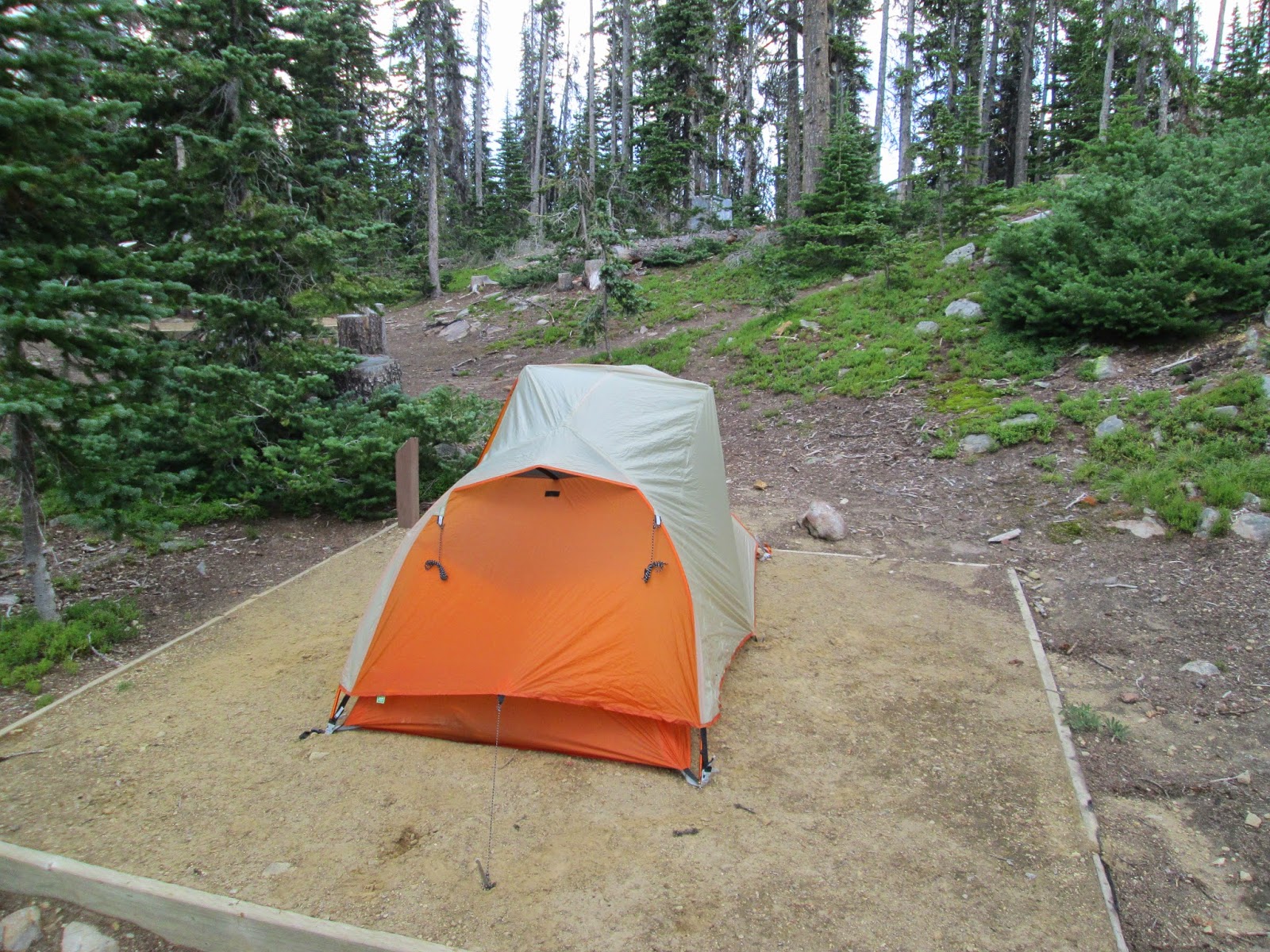