The Windy Joe Trail in Manning Park offers some stunning views of the park.  It is 8 km each way, and is fairly strenuous.  The trail follows an old access road that goes to the summit of Windy Joe Mountain where there is an old fire lookout tower.

I did this trail several years ago (I probably wasn't in good enough shape for it), and unfortunately most of the pictures I took from the top have been corrupted (I had a major computer break down a year ago) so I can't really show how great the views are.  However, I can say that the views are well worth the effort it takes to get to the top.

The first stretch of the trail is fairly easy, offering many opportunities to observe the flora and fauna of the woods.  What fascinated me the most was the large fungus growths that were all over the place.  It was sort of like a smurf village.  In addition, once the trail connected with the access road (which is where the strenuous climbing started), I saw quite a few really large pine cones, which was kind of neat.

If I were to do the hike again I would probably start a lot earlier, because doing the most strenuous part during the hottest time of day was incredibly draining.  The hike really wore me down.  As the road went higher there seemed to be less and less shade.  Also, there were no real views until the top of the mountain, which made it mentally exhausting.  When I finally reached the top I was very relieved.

Near and on the top of the mountain there are some interesting large rocks and boulders left behind by retreating glaciers. 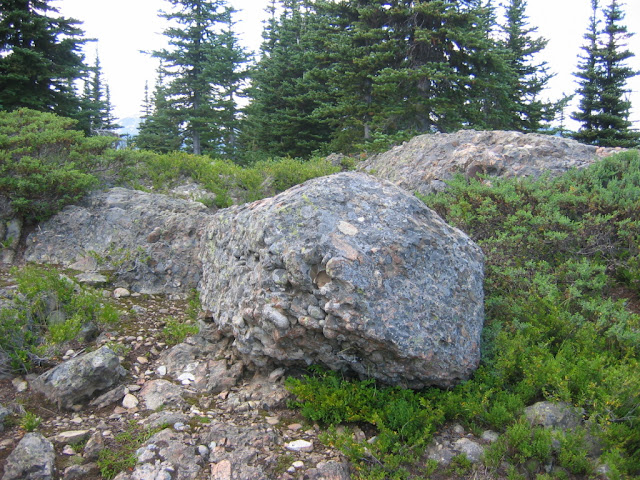 The old fire tower was also kind of neat to explore.  It was in much better shape than I was expecting, and offered some great panoramic views.  Outside the tower, the mountain lived up to its name as it was very windy (though that also meant very few bugs).

The hike down went much, much faster, though my legs were pretty worn out from the climb up.  This is not the hardest hike in Manning Park, but it still requires a bit of endurance.  Ultimately, the views are worth the climb, and the wide trail makes it very ideal for groups.  I also got the impression that it is not one of the higher traffic trails in the park (I only saw a couple of people on it).  I enjoyed it, and am thinking of doing it this winter, so maybe I'll have some better photos to upload in the future.